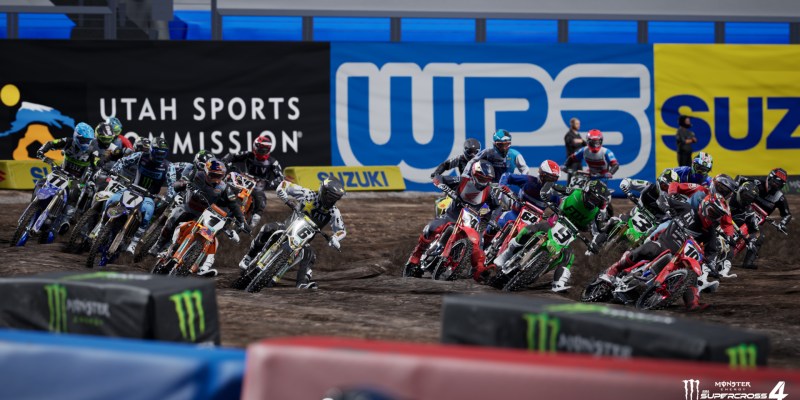 Engines roar, pulsating in anticipation of the race’s start. Riders sit prone, repeatedly applying the throttle. The crowd provides an anxious, throbbing of excitement, eagerly awaiting the chance to erupt. All of these elements coalesce in one singular moment, when the gate drops, gas floods into pistons, and all hell breaks loose on the track. Monster Energy Supercross 4 embody everything that makes crotch rocket duels so great, however, the crowd may be let down before the racers hit the final straightaway.

It’s rather difficult for me to wrap my brain around certain annualized franchises. Major sports brands like Madden, FIFA, and NHL make a bit more sense in my mind, for whatever illogical reason. Yet when they attempt to do the same thing with a Supercross series, it almost rings a bit disingenuous. Mercifully, it appears that there are plenty of major enhancements this season, many of which help to justify Milestone going back to the well so goddamn quickly.

From the first moment in the starting blocks, Monster Energy Supercross 4 does its best to fully immerse you into the action. Once you’ve reached certain stat levels (more on that later), making your way around the course is frantic and borderline overwhelming. That said, the argument could be made that anytime you share a tiny track with over 20 other competitors, this would be the expected experience.

Everything from taking hairpin turns to plowing through deep hills of sand reinforces the game’s authenticity. Tracks look fantastic in motion, despite the rather bland texture work. To be fair though, there are only so many ways to approach the appearance of dirt-covered tracks, without it veering out of simulation land.

One aspect of the overall presentation that’s troubled the franchise year after year is extremely inconsistent physics behavior. It doesn’t take much effort to take a turn improperly, resulting in your rider hurtling into the cheap seats. Additionally, any time where you land a jump either on top of another competitor or one of the obstacles lining the track, you should probably say a quick prayer. Divine intervention seems to be the only thing preventing you from either crumpling into a heap upon impact or getting hung up, while simultaneously clipping through some odd piece of geometry on the track itself. 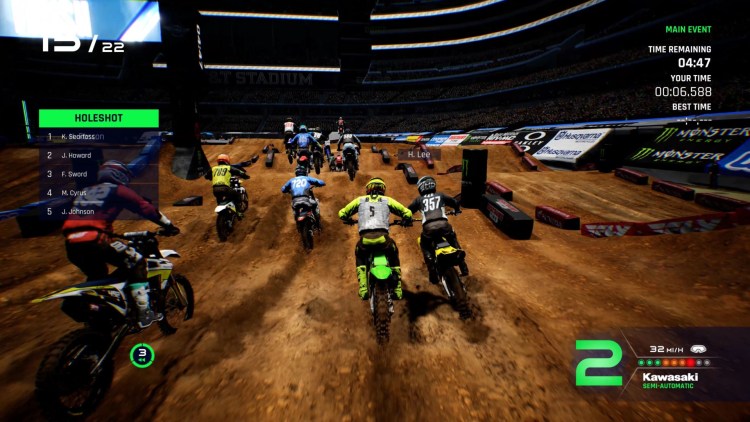 Boy oh boy, do I love losing races. No, seriously. I mean, that’s the only way to explain my early performance in Monster Energy Supercross 4’s career mode. I made the mistake of bypassing any exhibition races in favor of diving directly into the single-player career. So, without any experience with the series, I hit the track with reckless abandon. Unfortunately, due to my minimal stats early on in the campaign, I was bringing up a very distant rear of the field in damn near every race. The sad part was, the way the career mode is designed, I would’ve sucked like the vacuum of space, even if I was a god-tier expert.

Yes, you did just read that correctly. Regardless of whether I was a newcomer or veteran, I was predestined to start my career with a horrible, skid mark of a losing streak that would make even the Detroit Lions envious. Realistically speaking, if this was your first ever professional race, would you really expect to go home with the gold? As such, you start with the most barebones driver and bike possible, with little chance at accomplishing anything beyond crossing the finish line while still possessing a pulse.

Playing the game early on reminded me of an old phrase that I frequently recited in college: “Ds still get degrees!” In this case, you are forced to endure numerous non-competitive races, all in the name of mindless grinding. Fortunately, much like in the aforementioned phrase, even if you’re lapped by a kid who looks like he still had training wheels, you’ll still get paid. Above all, just focus on finishing the race, and everything else will fall into place. 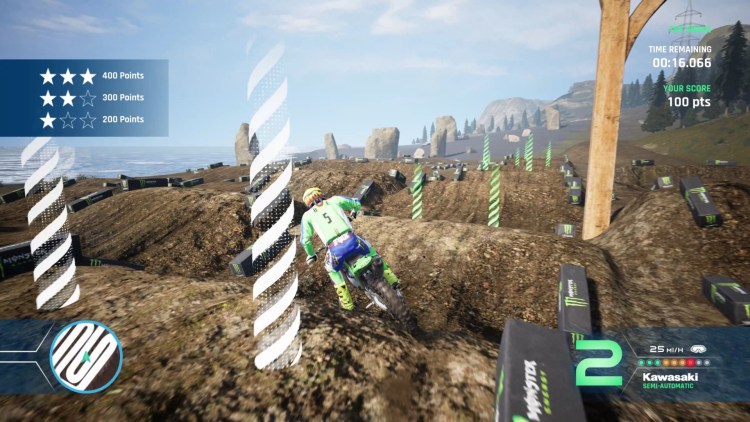 In the week leading up to the next race in career mode, there are up to three opportunities to participate in skill-centric training drills. Don’t get too excited though, because a vast majority are simply variations on racing, where you’re the only person on the track. While these challenges seemed rudimentary at best, the game still struggled with determining if I had crossed through a checkpoint, if I did so while in the air. It was just frivolous issues like this that morphed training from something that could have been fun into a legitimate chore to complete.

Eventually, through the process of leveling up fundamental stats such as scrubs, whips, cornering, and braking, you can become far more competitive. Along the same lines, there’s the option to dump coinage into purchasing new parts and upgrades for your bike. Even for a non-gearhead such as myself, they do an effective job of showing the stat benefits when equipping certain enhancements. Before long, I was kicking ass and looking for larger challenges. Unfortunately, the continual climb to be competitive took way too long to reach its apex.

Luckily, the single-player career isn’t all that Monster Energy Supercross 4 brings to the table. In conjunction with the campaign, the Compound mode allows for you to take your created player to their own dedicated island in the middle of nowhere, in search of new challenges. You essentially are allowed to tool around the island where ever you’d like, taking advantage of the five additional tracks and numerous unlockables. Even better yet, any substantial events or discoveries will also provide valuable resources to use leveling up custom your racer. 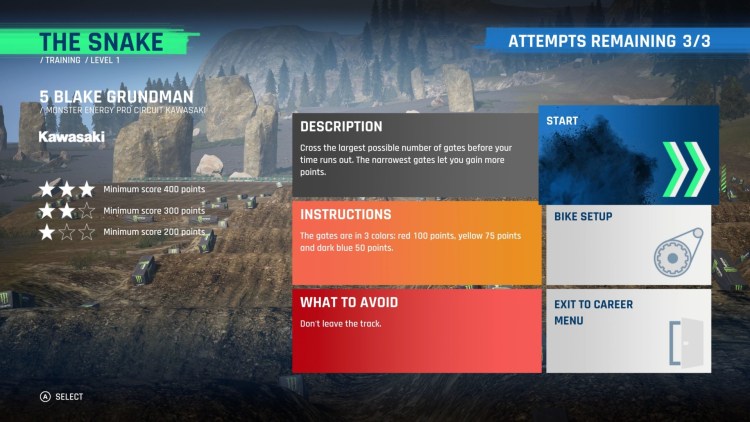 Despite the action on the track feeling and looking fairly authentic, when character models are shown in cinematics or otherwise, they looked straight out of the Pentium era. I mean, there are only a handful of character models to begin with, each of which has fairly limited customization options. Why these haven’t been polished up to coincide with the shift in platform generations is beyond me, but I’ve legitimately seen cadavers with more going on behind the eyes than these glorified haunted mannequins.

There may be plenty of new elements going into this season of Monster Energy Supercross 4, but these additions somehow manage to take away from the approachability. This is never a good sign, especially for a series that is already tough enough to breach. Though it makes decent steps in the right direction, the underlying lack of polish and senseless grinding keeps the experience from taking home the checkered flag.

Do you like riding a supercross bike, without the risk? Then you should definitely check out our Monster Energy Supercross 4 review.
6.5

Even though the career has been completely redesigned, it doesn't make much sense to nerf all riders before they've left the gate. And though the action on the track is still very solid, there are still plenty of sharp edges that are in need of polish. Especially if you played last year's installment, it may be best to steer clear of this outing.

The Outer Worlds’ next DLC, Murder on Eridanos, is coming to PC next week