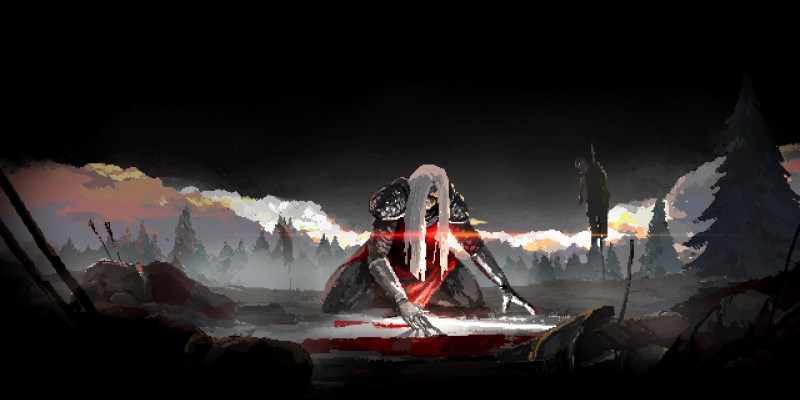 I desperately wanted to enjoy Moonscars. This newly released Souls-like Metroidvania from developer Black Mermaid and publisher Humble Games promises an action-packed romp in a grim and dark world. Featuring classic pixel graphics and a foreboding atmosphere, it certainly intrigued me.

Fast forward many hours after starting the campaign: there I was staring at the screen wondering where it all went wrong. Truth be told, Moonscars did have some engrossing concepts in mind (with mechanics that fans of the genres would be familiar with). Sadly, it’s as though the developer was also throwing ideas out there hoping that one would stick.

One of my biggest pet peeves is how the Souls-like genre has ushered in a slew of games that tend to neglect a meaningful narrative in favor of cryptic clues. I certainly don’t want a straightforward plot that holds my hand with a ton of exposition. At the same time, I also dislike it when I’m assailed by a torrent of mumbo jumbo in an attempt at worldbuilding.

Moonscars stumbles down this pitfall rapidly, almost in spectacular fashion, I might add. The campaign begins when a god known as the Sculptor talks about his creations while his loyal cat looks on. It then shows your character, Grey Irma, fighting soldiers, only to succumb to her wounds. She then wakes up, unaware of what’s going on save for her mission to find the Sculptor.

What then follows is a bunch of random terms like “clayborne, “pristine,” and “cleft,” with a bit of exposition thrown in as you meet Irma’s old pals. Along the way, you’ll meet other characters, such as a talking cat (hurray for cats!), a couple of kids, and a wandering warrior. What they’re doing there, I’ll never know. I zoned out a couple of hours in because the story was a mess.

At the start of Moonscars, you’ve already got the dash, air dash, wall climb, and parry abilities. It felt so good to have these available from the get-go to help with traversal and combat. Your regular attacks are swipes with your trusty sword, and you can use special weapons such as hammers, razor wheels, and spears, too (more on this mechanic in a while). Just as well, the aforementioned parry will become integral in almost all situations. By pressing the button at the correct time (i.e., when an enemy’s attack has a red flash), you can swiftly counter with a strong hit that knocks them back.

Likewise, Grey Irma has spells known as Witcheries. These powers range from a simple frontal blast or a thrown projectile to corpse explosions and whirling vortices. They’re unlocked by spending bone powder. This is the normal currency (i.e., souls) that are lost upon death, but they can be recovered if you manage to reach your corpse.

When cast, Witcheries use up ichor (i.e., mana/energy). It’s also used to heal your character, providing a viable means of survivability on the fly. Even better, your ichor/mana is replenished by consistently whacking enemies.

In a way, Moonscars has a lot of promise at the beginning with all these tools at your disposal, akin to the “greatest hits” when it comes to the things you’re looking for in 2D Metroidvania combat. You’ll probably expect frantic action where you’re parrying and dodging/dashing often, with methods to heal up and restore your mana when necessary.

Admittedly, some kinks need to be ironed out. The first is how a spell is often required to demolish obstacles or breakable walls. If you have the mana to spare, then good for you. If not, you’ll need to find the nearest enemy that can be smacked around or go back to a fast travel point to restore your MP.

These breakable walls are scattered all over Moonscars‘ levels, and there are plenty of them that simply contain some extra bone powder/souls. I can’t count the number of times when I saw only a smattering of currency waiting for me. This might be the first time that I’ve felt disdain for “secret rooms” — they don’t seem special at all if there are dozens of them with poor rewards.

Secondly, it’s how Moonscars‘ areas rely heavily on spike traps, the most unoriginal among all dungeon hazards. In the first section, I saw a few traps and happily avoided them. Then, I saw more in the second, third, fourth, and so on. True, bashing hostiles and causing them to get impaled when they attack were treats early on. However, that novelty wore off when half the rooms in the game have a similar contraption or feature.

Don’t get me wrong: I like games that present a challenge. But that challenge has to be unique and consequential, not the ridiculously overdone use of traps that make levels bland. Instead of enjoying the traversal, exploration, and discovery, the whole endeavor became a cautious and unrewarding slog.

Another annoyance is how Moonscars deals with hubs, itemization, navigation, and fast travel points. The teleporters you spot can be used to head back to the Mold Workshop hub. However, activating each one for the first time will also spawn a doppelganger in that room once you get back. This fit the theme and narrative, so I was okay with it at the beginning. Later on, it felt tiresome since I was battling the same type of foe over and over. Worse, it also causes your special weapon to disappear. You can get another one by defeating the clone, but it might be at a lower level than what you had before.

As for navigation and the map, I’m glad that Moonscars does have one. The regrettable part is that it’s a pixelated mess. There were instances when I wondered if I had already explored the room or if there were still passages or exits to find, all because the design wasn’t clear.

Lastly, the hub has a couple of vendors, and there are cases when NPCs you’ve met might show up there. What perplexed me was how the vendors use different currencies to sell the same item type (i.e., amulets), and yet only three could be equipped at any given time.

All in all, Moonscars came in hot with all the tools that could’ve made for an engrossing Souls-like Metroidvania. Sadly, it fell flat with its attempt at the former. As for the latter, it had too many ideas that didn’t necessarily mesh well with others.

A gritty Souls-like Metroidvania where you fight doppelgangers and other creatures.
6

Moonscars has a lot of promising ideas. Unfortunately, the threadbare plot, questionable level design, and odd execution of mechanics hold it back.