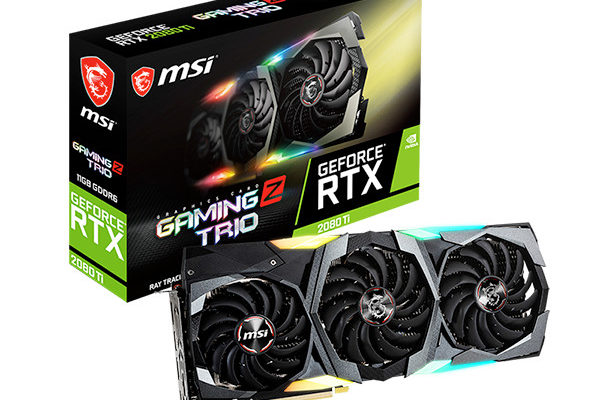 MSI has announced the launch of what it calls the “most powerful Turing-based gaming graphics card.” Featuring 11GB of GDDR6 memory at speeds of up to 16Gbps, the new GeForce RTX 2080 Ti Gaming Z Trio is MSI’s premium graphics card.

The company states that the new GPU has an over 5% performance boost right out of the box over the previous top-level card from the company, the Gaming X Trio, which had just 14Gbps of memory speed.

The Gaming Z Trio is advertised by MSI to be the “ultimate form in custom GeForce graphics cards.” With the aforementioned 16Gbps of memory speed, the Gaming Z Trio can push out up to 704Gbps, marking an improvement over the base GeForce GTX 2080 Ti of over 14% in memory bandwidth.

For those of you who want to feel the flow, MSI’s Mystic Light RGB is present. It’s also pre-packaged with the Dragon Center optimization software along with MSI’s Afterburner software that allows quick and simple overclocking capabilities for the GPU. Cooling is handled via MSI’s Tri-Frozr cooling system with three Torx 3.0 fans, which takes advantage of the card’s larger size.

Full specs for MSI’s newest graphics card can be found below:

The MSI GeForce RTX 2080 Ti Gaming Z Trio is available now for purchase according to MSI, though the company hasn’t revealed the official price for United States-based consumers. For United Kingdom consumers, the card is running for £1,308. If a cost conversion were done, purchases in the US are looking at a possible price of $1,600 or more. Though on the realistic side of things, it’s likely going to run you about $1,350 to pick one up once more storefronts begin to offer it.

Risk of Rain 2 – How to unlock the Acrid