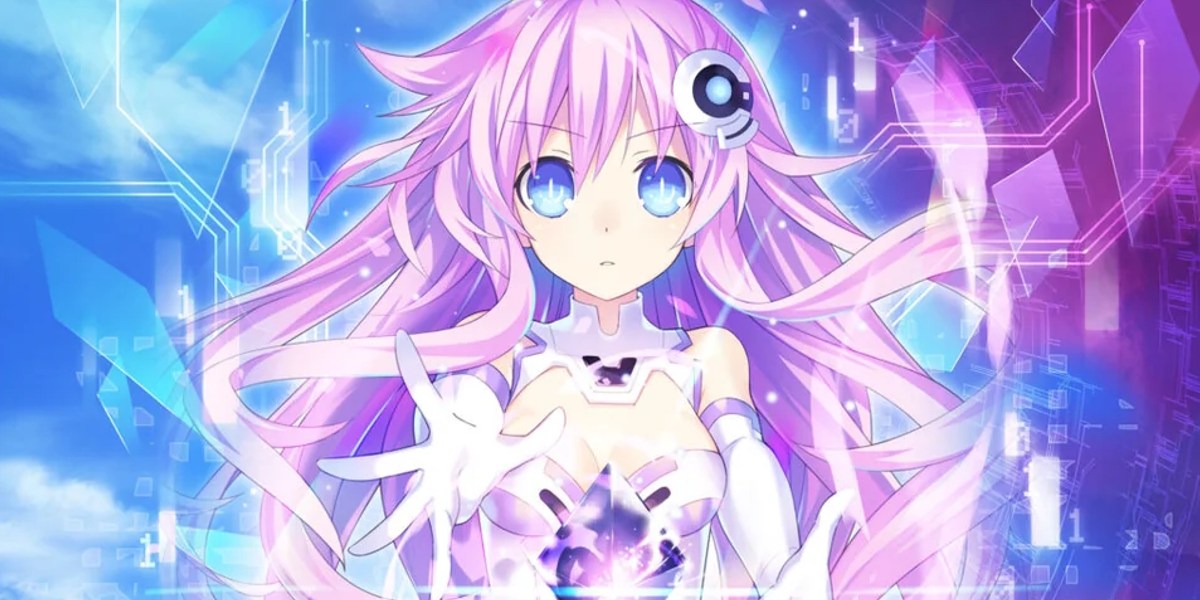 The Neptunia series has undergone a decline over the last half a decade, owing to the lack of mainline installments. The last mainline Neptunia game released was Megadimension Neptunia VII in 2016. Since then, developer Idea Factory has created nine spin-offs of varying quality. These spin-offs have failed to progress the series’ main story at all, which has frustrated fans. This is where Neptunia: Sisters VS Sisters comes in and starts to make things right.

For those unfamiliar, the Neptunia series takes place in the world of Gamindustri. Gamindustri is a continent that is home to four nations: Planeptune, Leanbox, Lastation, and Lowee. The gist of Neptunia is that everything in Gamindustri represents something in the real-world games industry. In the case of the four nations, they represent Sega, Xbox, PlayStation, and Nintendo, respectively.

Each of the mainline entry’s stories tells a tale of a real-world event. For example, Neptunia Re:Birth 3 is about an ancient nation called Tari that collapsed after its leader became obsessed with power and influence. This is a retelling of Atari’s real-world decline and eventual bankruptcy in the 1980s. Oh, and of course, almost everyone in Neptunia is an anime girl because this is a Japanese game.

Just to be clear, Neptunia: Sisters VS Sisters is not a mainline entry. Much like the many Neptunia games that have come before it, this is yet another spin-off. However, that doesn’t mean all hope is lost. Idea Factory appears to have changed how it approaches spin-offs and this has resulted in the best Neptunia spin-off yet. 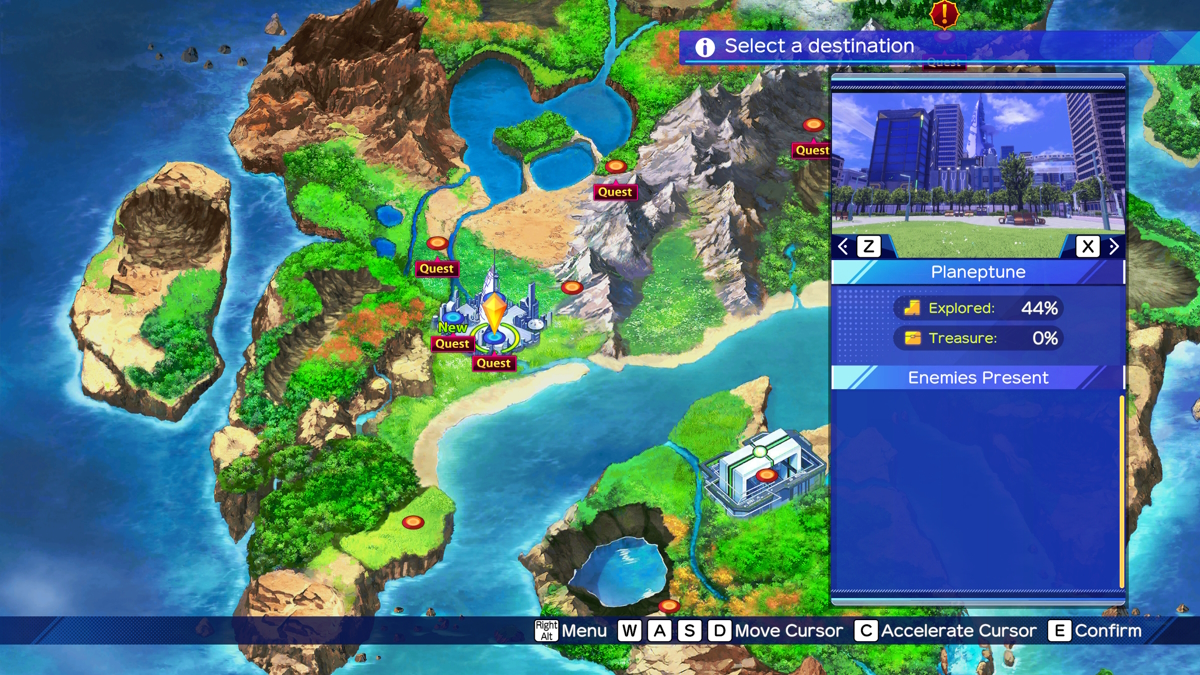 The storytelling and how it reflects the real world have always been Neptunia‘s unique selling point. However, the spin-off games neglect this, usually opting to instead tell a generic story. Unfortunately, the series has rarely had good enough gameplay to justify such an approach, leading to stagnation and several years of subpar games.

Neptunia: Sisters VS Sisters addresses this by once again telling a story that will resonate with franchise fans. Without delving into spoilers, the basics are that the four CPU Candidates were forced into a deep sleep for two years. Upon awakening, they find out that Gamindustri has completely changed. Traditional consoles are becoming less popular and a mysterious mobile device called the rPhone has taken their place.

The rPhones rise to popularity coincides with the Trendi Phenomenon, an event where monsters spawn out of thin air and attack civilians. Even worse at the beginning of this crisis, the PC Continent vanished. These events have forced the citizens of Gamindustri into lockdown as the CPUs try to figure out what to do. Adding to the issues is that protagonist and heroine Neptune is nowhere to be seen. The result? Planeptune has fallen apart and it’s up to its CPU candidate Nepgear to step up and save her people.

Continuing the tale in real time

So, if Neptunia: Sisters VS Sisters tells a story that continues the mainline entries, why isn’t it a mainline entry? There are two reasons for this. One, it uses real-time combat rather than turn-based combat. Second, its story is much shorter than Megadimension Neptunia VII. Its length is comparable to Re;Birth 2, but that was comfortably the shortest of the mainline games. 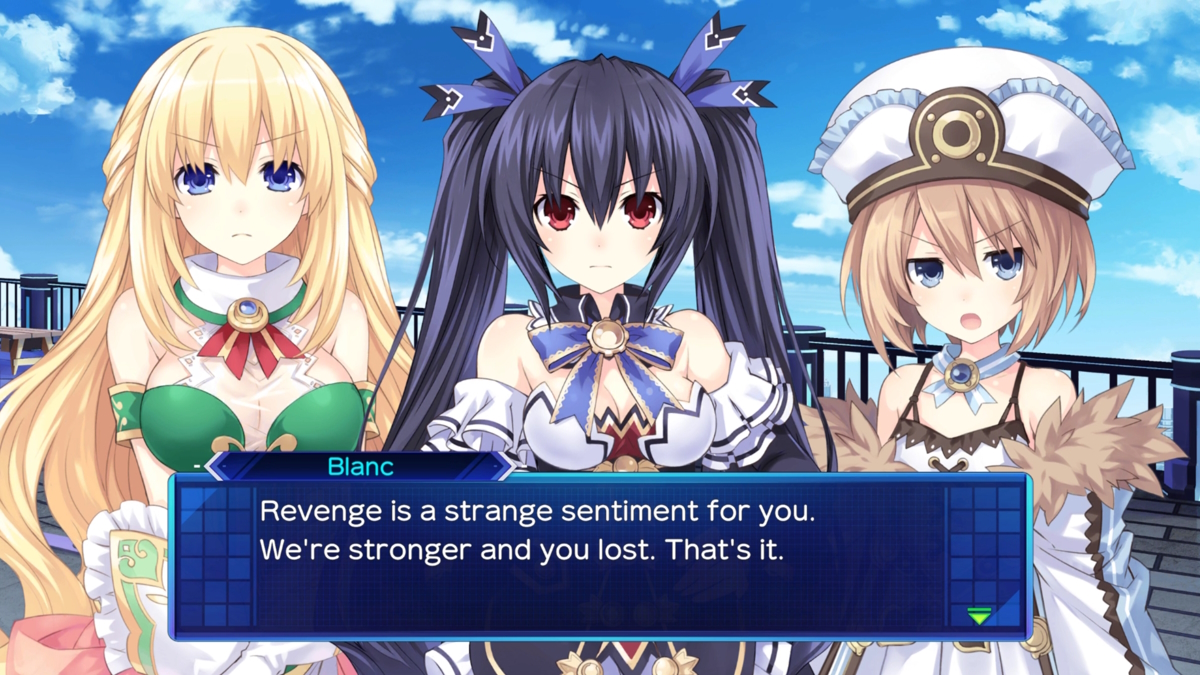 Despite it being shorter than VII, that’s still a fine length for this kind of game. It’s comparable to some of the older mainline entries so, content-wise, you’re getting a reasonable amount. It’s certainly better than Neptunia Virtual Stars which barely managed double figures. Just don’t expect a ton of side quests to grind or overly appealing post-game content. Once you have finished the story, there’s not too much else to accomplish.

You use a party of three, with each character having assigned action points. Using the Combo Maker tool, you can customize up to two combos selected from an impressive variety of attacks. There are three types of basic attacks: rush, power, and break. Power attacks hit harder, break attacks stun and knock down enemies, and rush attacks increase your Goddess Gauge allowing you to transform and use powerful EXE Drives.

There are also Tactical Skills that charge on a separate gauge. These attacks either hit hard or deal secondary effects such as debuffing enemies or healing teammates. This second gauge is also consumed when using items, meaning that you have to choose between using a Tactical Skill or an item. 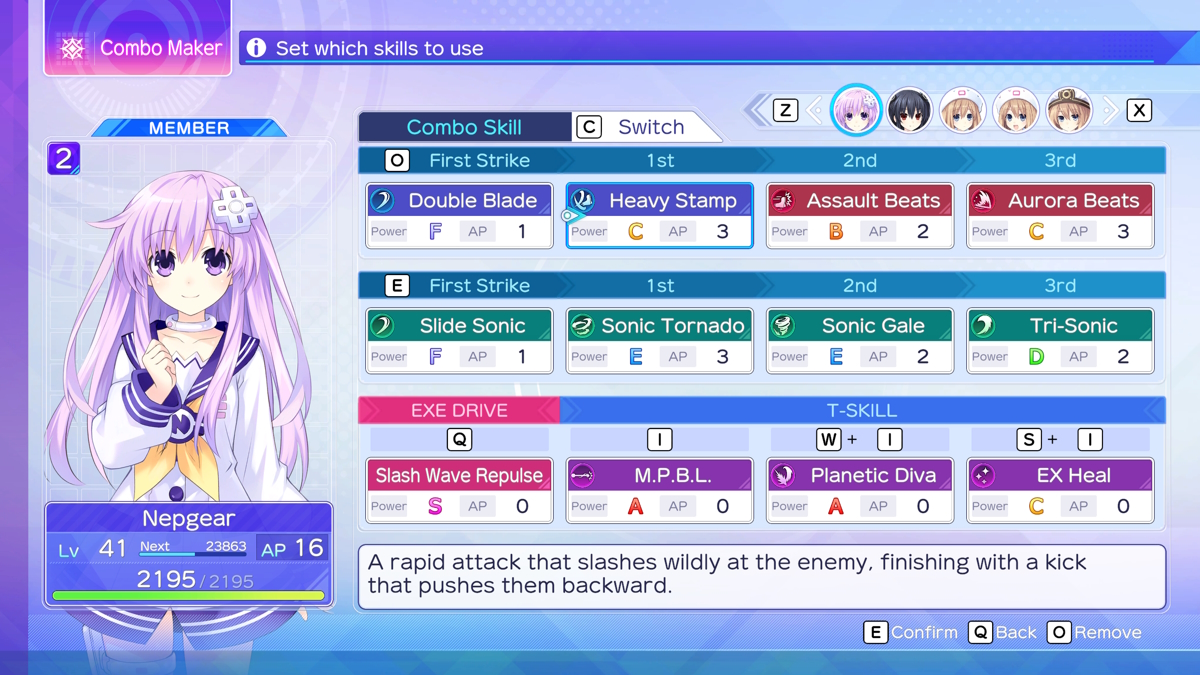 The core makeup of Neptunia: Sisters VS Sisters‘ combat is decent enough. It’s nothing special, but I like that it incorporates elements of the turn-based combat seen in the mainline games. Neptunia fans will feel at home setting up their combos and there’s plenty of fan service in the form of iconic special attacks making a return.

Unfortunately, setting up combos is probably the most fun you’ll have with the combat. The fighting itself is not awful, but it lacks refinement. A lot of the animations feel stiff and there’s an overall lack of flow. Some attacks have painfully long recovery times, during which you can’t use guard, items, or even Step Dash to avoid incoming attacks.

The inability to disengage from combos quickly and be more defensive means that the best strategy is to spam break attacks and trap your opponent on the floor. Since very few enemies have any stun resistance, this works in almost every fight. It’s especially effective, as, after using up your action points, you can just switch to another party member and repeat. I’d prefer to block attacks and counters while mixing in well-timed combos, but the combat’s complete lack of polish makes playing like that a waste of time. 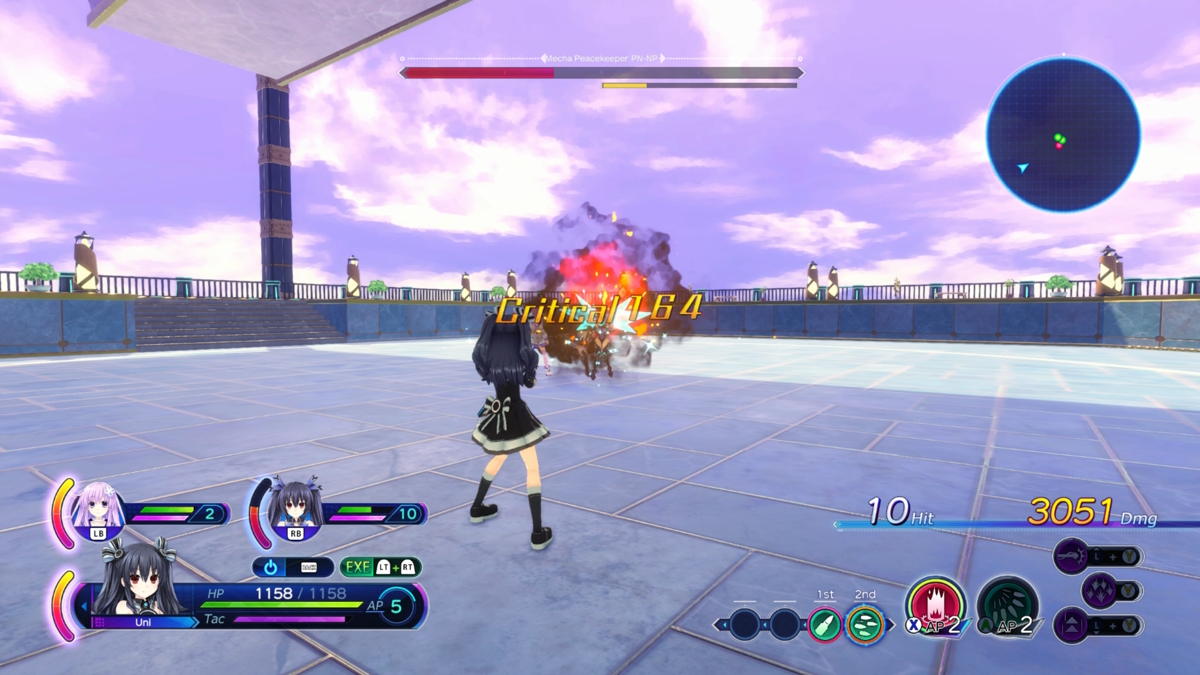 A first step toward evolution

Spoilers ahead for those looking to avoid them! One of the most impressive innovations made in Neptunia: Sisters VS Sisters is unlocked halfway through the story. Nepgear and friends work together to liberate Planeptune and take back her home. They flush out the monsters living here and discover a method of how to stop the Trendi Phenomenon.

After liberating Planeptune, you can freely explore the city. This is a first for the Neptunia series and is a wonderful sign of what’s to come. No longer do we only get snippets into the world of Gamindustri through dungeons and visual novel-style cutscenes. Neptunia: Sisters VS Sisters brings Planeptune to life in a fully rendered 3D environment featuring key landmarks such as the Planeptower.

Being able to freely explore an entire city is a lot of fun, and I can only hope that this means that future games will see Leanbox, Lastation, and Lowee given the same treatment. Truth be told, there isn’t that much to do in Sisters VS Sisters‘ rendition of Planeptune. I can forgive that though, because this is a genuine attempt at innovation and it shows that Idea Factory still has the ambition to create impactful content. It’s something Neptunia has been badly lacking for some time now. 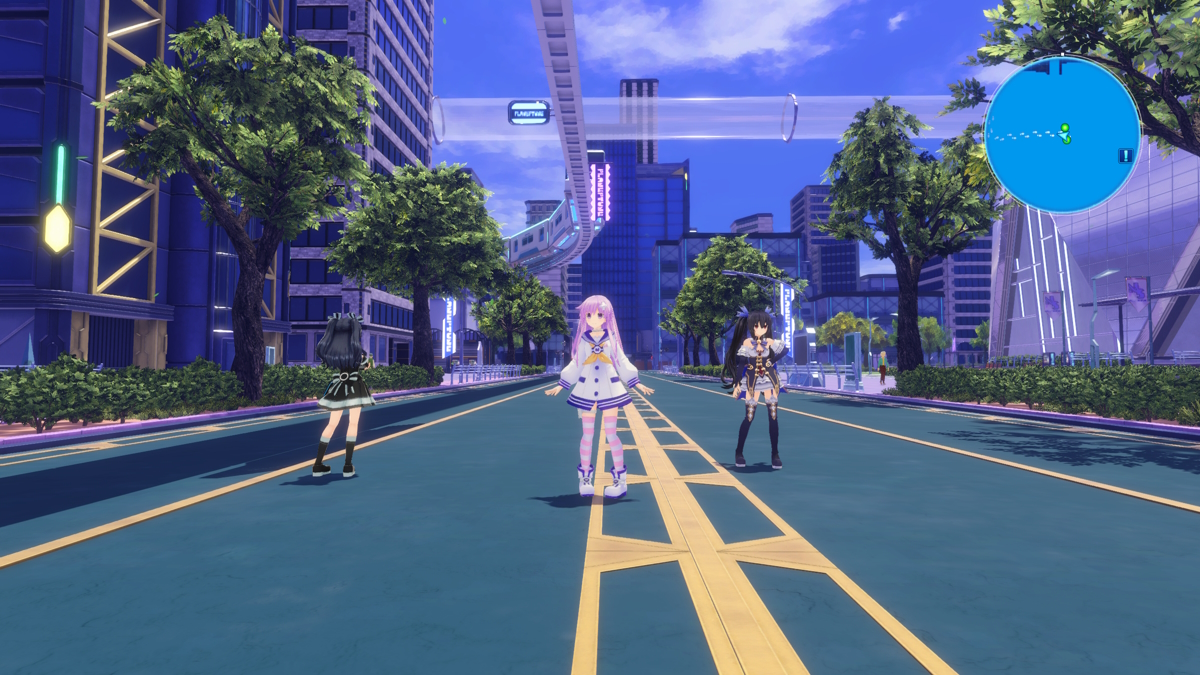 The one criticism I would have is that getting around Planeptune can be frustrating. It’s a huge city and, despite being literal deities, our main cast’s out-of-combat movement is limited to jogging. This lack of movement is especially annoying in dungeons, as Sisters VS Sisters features some of the largest dungeons ever seen in Neptunia. That should be a good thing, but without a way to traverse through them effectively, that size becomes an annoyance. At the very least, there should be a sprint function if nothing else.

A better approach to spin-offs

As JRPGs go, Neptunia: Sisters VS Sisters is nothing special. It’s a fun enough game with an interesting story and average combat. However, by Neptunia spin-off standards, Sisters VS Sisters is a blessing. After years of forgettable installments, the Neptunia franchise finally has something new worth talking about.

There’s still a huge amount of room for improvement, but Neptunia: Sisters VS Sisters at least tries to build on the foundations of the mainline entries. Using a spin-off to tell a canon storyline that will impact future games is a much more desirable approach than resorting to generic one-off stories no one remembers. In saying that, regardless of improvements, what the Neptunia series really needs is a new mainline entry — and Sisters VS Sisters isn’t that.

Neptunia: Sisters VS Sisters is nothing more than a decent but unspectacular JRPG. However, for Neptunia fans, it's a blessing. Idea Factory has finally gotten back to continuing the main story and has delivered a product worth talking about. It isn't the mainline entry that fans really want, but it's still leagues ahead of the other Neptunia spin-off games that it succeeds.

Corsair TC200 gaming chair review — A seat above and below