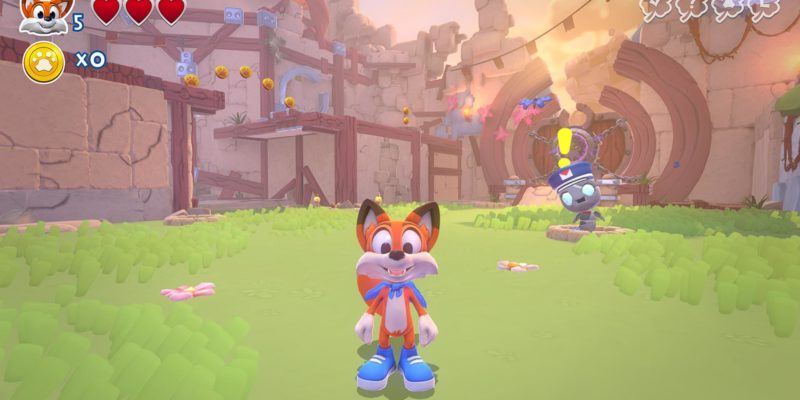 New Super Lucky’s Tale is an improved version of the game that came out a few years ago. More specifically, it’s a port of the improved Switch version that re-did the visuals, changed levels and added new ones, and made a host of other similar changes. I love 3D platformers, and while this game may not break any new ground, it’s a ton of fun and bolsters a surprising amount of variety within its brisk, yet satisfactory length.

The game opens with a story explaining how a group of guardians were attacked by a bunch of cats and ended up opening a portal to banish them. The eponymous hero is a relative of some of the guardians, and he alone gets pulled into said portal. It’s up to him to hunt down pages to restore a book to stop the bad guys from doing bad things. The story presentation is cute and innocuous enough.

Lucky himself doesn’t talk or have anything approximating a personality, but he interacts with the bosses of each world at regular intervals and they help make up for that. The writing is often rather amusing too, which gives New Super Lucky’s Tale a lot more flavor. The game’s visuals are fairly dated, however, with a lot of low-resolution textures on display. It runs very well on PC, though. The only real issue I ever had was that I got hit with massive slowdown whenever I took damage. This was at its worst when I had to restart a boss battle because I kept getting hit. The framerate chugged so much I couldn’t even move, resulting in a rare death. 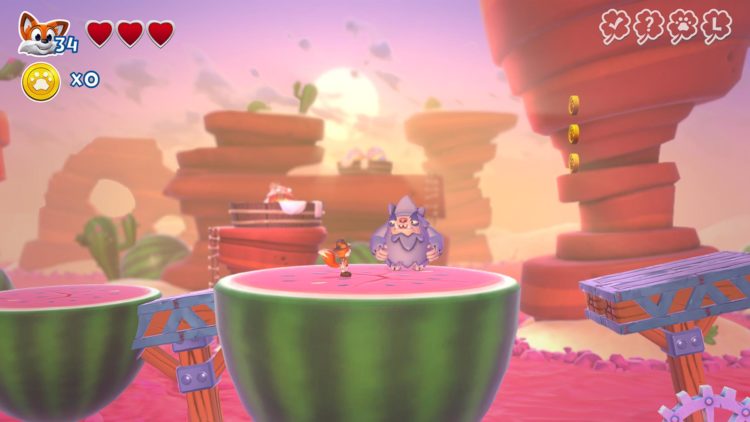 You know the drill

New Super Lucky’s Tale is very much in the vein of most of the successful games in the genre. It’s more Super Mario Galaxy than Super Mario 64, however, as the individual levels are small and based around unique goals and mechanics. In case I didn’t make it clear enough earlier, your goal is to collect pages, just like in Yooka-Laylee. The game is made up of six worlds that typically have between three and five levels. Each level has four pages to collect and every world has a certain number of extra pages as well.

You collect the extra pages via glowing hatches you find scattered around. In most worlds, these hatches lead to statue puzzles. There are also mini-game stages where you have to control Lucky in a ball a la Super Monkey Ball and collect coins. These are both enjoyable, even if the puzzles are sometimes the only challenging things in the game. New Super Lucky’s Tale is mostly very easy, but these puzzles can feel 50 times harder than the rest of the game, which is a bit jarring.

Outside of those, though, the game is an absolute breeze. Death will be a truly rare occurrence for most adults, as the difficulty is more geared to kids. Although I don’t see how they’ll be able to do some of the puzzles. Lucky can’t learn new moves and doesn’t have many abilities, but the controls are wonderfully precise and the general gameplay simplicity works in the game’s favor. Lucky can jump, double jump, attack with his tail, stomp, and burrow underground. Burrowing protects you from enemy attacks, too. 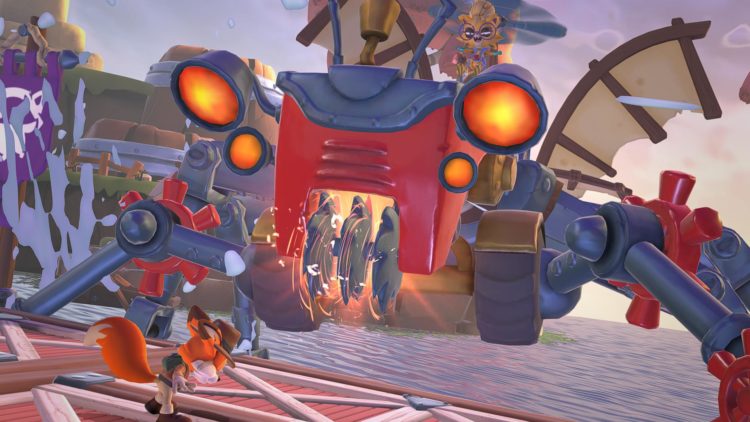 There’s a good amount of variety to New Super Lucky’s Tale‘s worlds. They’re mostly the usual suspects. Green world, beach world, haunted world, etc, etc. But they’re all as visually distinct as that implies. The levels themselves come in several different forms. My favorite is the standard 3D platformer stage where you explore levels and often have to complete a task for an NPC. There are also really solid 2D side-scroller levels which are exactly what they sound like, plus an auto-runner variation of these where Lucky is constantly pressed forward.

Then there are the top-down maze levels, which are my least favorite. Navigating them can be a bit confusing due to the camera’s position. I would often get my sense of direction messed up during these, but there are very few of them. Finally, each world culminates in a boss battle that often requires very little combat on your part. These are simple and based around dodging enemy attacks and occasionally hitting an object back at the boss or directly attacking them yourself.

New Super Lucky’s Tale is a short romp when all is said and done. The number of pages needed to unlock the boss levels is surprisingly low. As I said, there are four pages in each non-boss level. One for simply reaching the end, one for collecting at least 300 coins, another for finding the letters that spell the main character’s name, and a hidden page. The hidden page is almost always found via the same kind of hatches that contain the extra pages in each world. Those typically require you to interact with a clock and collect colored coins before you run out of time. 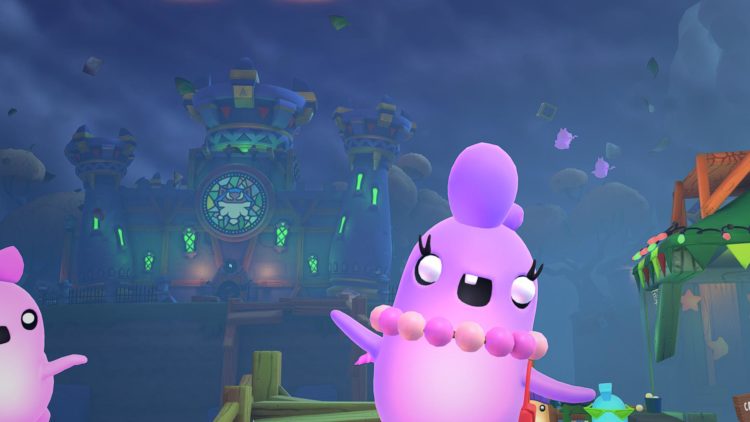 No reason not to be a completionist

Collecting all of the pages in each world doesn’t do anything big, but it does unlock a new costume for Lucky at the shop. The only thing you can do with the thousands and thousands of coins you collect is purchasing clothing items, which are separated by head and body. You can naturally mix and match the hats and garments from two different outfits if you’d like. I personally didn’t care much for the outfits. But I also don’t care much for playing as personality-deprived cartoon foxes either, so that’s neither here nor there.

There isn’t much of an incentive to 100% the game. However, I still found it enjoyable to collect everything and aim to complete all of the objectives. Although, New Super Lucky’s Tale is a fun time, so I didn’t want it to end too soon either. The only big negatives that drag the game down a bit are its short length and, more importantly, how generic it is. It definitely feels like a standard mascot platformer in every way.

Regardless, the game is enjoyable and well worth playing for fans of platformers. That goes double for anyone who didn’t play the previous iteration. There’s nothing here that you haven’t seen before, but these kinds of games aren’t very common nowadays. It’s always a pleasant surprise when we not only get a new one but one that’s as good as New Super Lucky’s Tale. 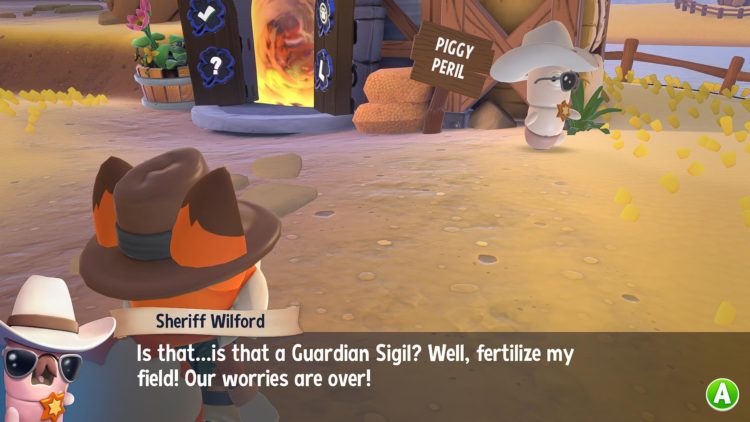 New Super Lucky's Tale may not break new ground but it's an excellent example of a modern platformer, familiarity and all.

Supermarket Shriek review – Scream and shout and let it all out

By Kurt Perry13 hours ago
Reviews

By Jason Rodriguez16 hours ago
Reviews