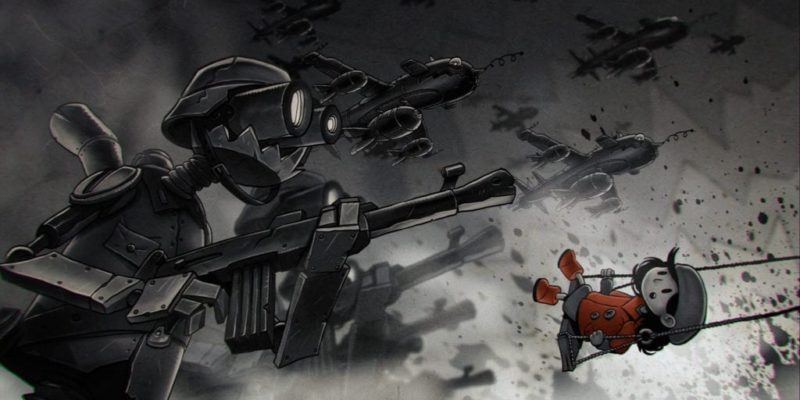 In the past 30 plus or so years of gaming, I’ve often considered myself as a first-person shooter (FPS) aficionado. From the time I first laid eyes on the original Wolfenstein, to the beaches of Normandy in Medal of Honor: Allied Assault, and the devastated cities of the Middle East in Call of Duty: Modern Warfare, FPS games enriched my love of history. It was because of their focus on conflicts — war, that blight upon man’s history — and a sense of becoming part of those events.

Violence was rife in those games, and you relied on your twitch reflexes and frantic callouts to succeed. And yet, games need not be violent to tell a story about the atrocities and ravages of war. In fact, certain non-violent games stand head and shoulders above the rest because they depict warfare in a restrained and almost dramatic way.

As many nations commemorate Remembrance Day and Veterans Day, we recall the men and women who gave the ultimate sacrifice. Many games may glorify war with death, destruction, and gore. Still, others do so in an inimitable manner — with poignancy, humility, and reflection. Here are some recent non-violent games which I felt conveyed the true meaning of war without resorting to exploding body parts, killstreaks, realistic graphics, or ray tracing:

This War Of Mine 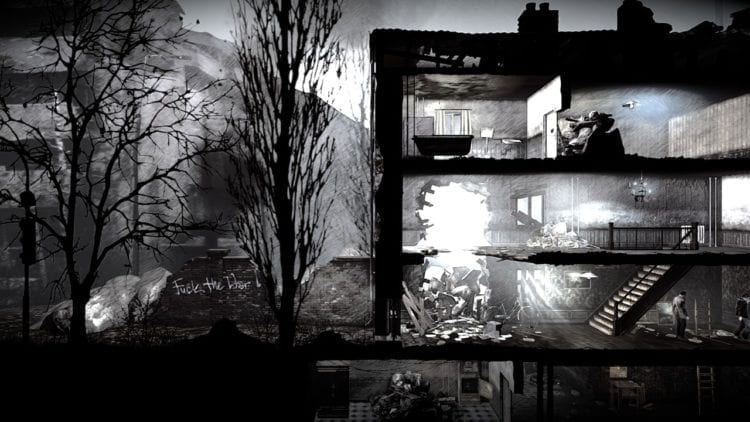 This War of Mine has been around for four years yet it still continues to generate interest from a dedicated player base. This is because of the game’s mechanics and portrayal of warfare. You’re not an elite soldier from the special forces. Neither are you an action star who turns into an ass-kicking machine when pushed to the limits. You’re simply playing as a group of civilians trying to survive in a war-torn city.

Your men and women scavenge for food and supplies. They craft items and furnishings or guard your safehouse. They live, breathe, starve, are injured, or perish all too suddenly — such is the way of life during dangerous times. This War of Mine does have a bit of violence, but it is toned down compared to the average war game. Its narrative flow is more jarring with morality serving as the first casualty of war.

This War of Mine also provides additional content via DLC offerings, many of which support charities. This War of Mine: The Little Ones had children which allowed you to play and experience what terrible events might be like when surrounded by kids. Meanwhile, Father’s Promise tells the story of a family trying to desperately survive. Also, the upcoming DLC The Last Broadcast is about gathering news and information and trying to spread the word for beleaguered survivors. 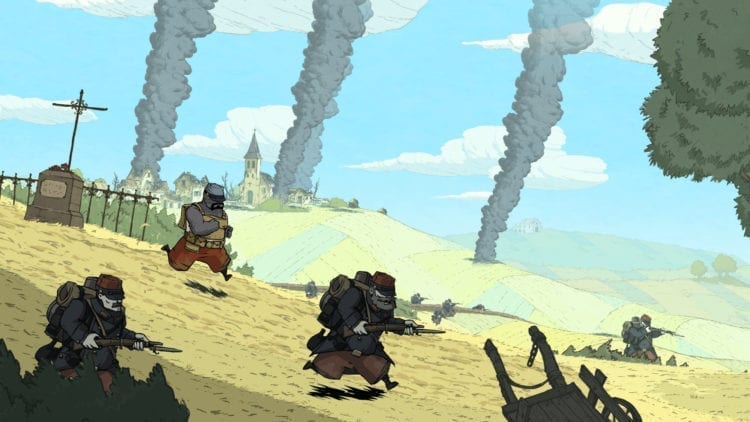 One of the most moving war games in recent memory happens to look like a Saturday morning cartoon. It’s these very visuals that give Valiant Hearts: The Great War a somber feel when characters’ lives are at stake. What was partly a search-and-rescue plot slowly but surely turns into a thought-provoking analysis of the lingering effects of World War I.

You get to see it in short gameplay sequences — your characters braving the trenches while trying to avoid machine gun fire, cutting through barbed wire to get to the next area, or surviving a chlorine gas attack. It’s not as harrowing, per se than more graphically-intensive counterparts. It does, however, get the job done when it comes to evoking an emotional response.

Valiant Hearts: The Great War is able to portray that dark period in human history in such a way that it shows you how friendships can blossom. It also tells us what mankind will do when pushed to the breaking point as exemplified by its closing act. 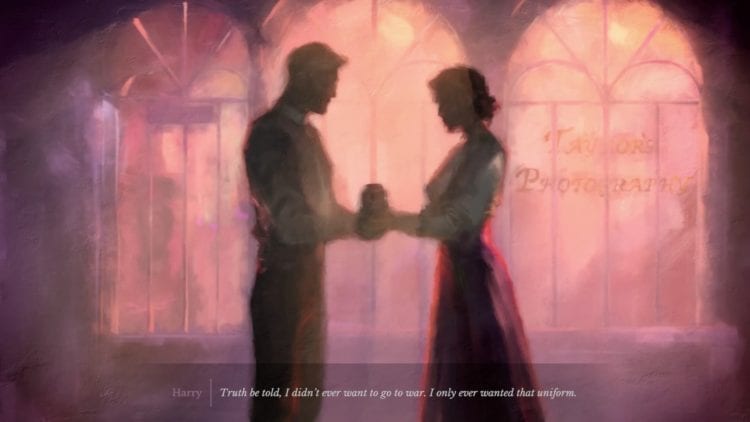 Another game that depicts World War I is 11-11: Memories Retold. From the game’s title itself, you’ll know that it pertains to “the 11th hour of the 11th day of the 11th month.” It’s the moment the armistice that ended the conflict was signed. Today happens to be the commemoration of its centenary.

The countdown to that day plays a significant factor throughout the game. As two men on opposing forces, your characters (and their animal friends) try their best to survive. It’s not just physically surviving, but the mere idea of keeping your humanity intact.

The painterly style and presentation of 11-11: Memories Retold is a wonder to behold. After all, it comes from Aardman Animations, a studio that has won an Academy Award and a BAFTA. The story moves at a brisk pace and at times becomes whimsical. Still, it nonetheless portrays World War I with as much artistic aplomb as it can muster.

You can check out our recent review of 11-11: Memories Retold here.

My Memory Of Us 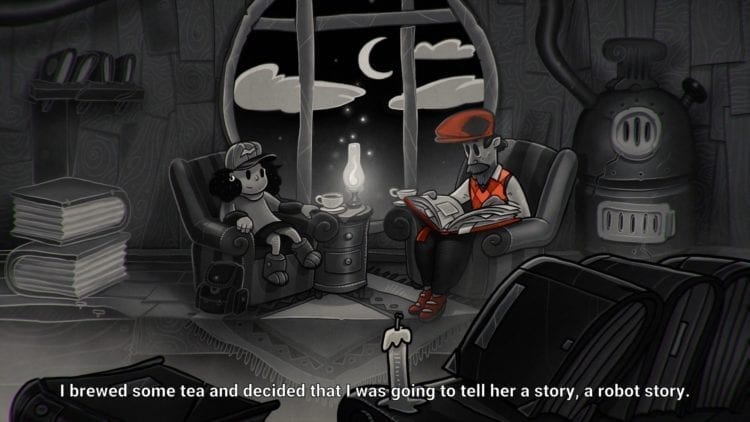 From one “memory” to another, My Memory Of Us tells the story of a boy and a girl solving puzzles and adventuring through a city ruled by evil robots. This is, of course, an allegory for World War II and the Nazi invasion of Poland. The pair even sees others marked with red; these people are detested and subjugated by other NPCs. One character is actually a nod to “the girl in the red dress” in Steven Spielberg’s masterpiece Schindler’s List.

Yes, it is a video game about the Holocaust, whimsically told and framed from a child’s point of view. Some might scoff at the very idea, thinking that it makes light of the suffering of millions during World War II, but I disagree. Even at the very beginning, the old man (voiced by Patrick Stewart) tells a young child that he will tell her “a story about robots.”

In a way, it’s more akin to another World War II film, Life is Beautiful which was directed by Roberto Benigni. Mr. “Bon Giorno, Principessa” also starred in that film and won an Academy Award for his work.

How did that film win over the audience and critics in spite of its comedic style? It’s because of that very style itself and the lighthearted approach. Benigni’s character told his son that they were simply playing a game. That way, the boy can win a tank as a reward. This was even though the family was in a concentration camp. It’s the idea of giving hope to a child even in the darkest of times; a silly contest that mirrors a true life and death struggle.

“That street has thirteen heroes”

On a personal note, I can relate to the above. As a child, I often asked my grandmother (rest her soul) why our provincial town had a street called “Trece Martires” (Thirteen Martyrs). She simply told me it’s because of thirteen heroes. It seemed pretty innocuous at the time. Plus, the word “heroes” had a nice ring to it as any child would know.

As I grew older, I came to realize that it was where thirteen townsfolk were executed by Japanese forces during World War II. One of those happened to be her relative. The men, who were suspected of being guerrillas, were tortured before being hanged in full view of their families and neighbors.

Euphemisms and an indirect portrayal of the harsh realities of war are done simply because no child should be exposed to or experience such brutality. My Memory of Us and the old man’s retelling of that harrowing period in a country’s history exemplifies that. 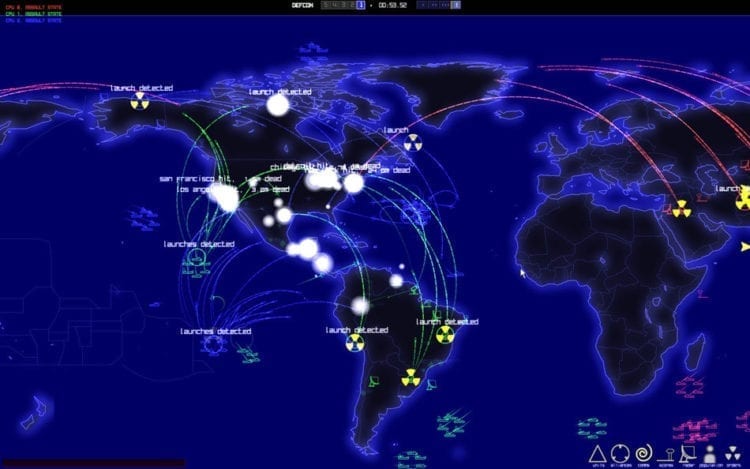 While I did state that I’d prefer looking into more recent non-violent war games, there is one that was released back in 2006 that I feel encapsulates war’s true horror: DEFCON.

In DEFCON, players place various military units and structures around the world map. The game slowly builds to a crescendo as the DEFCON level rises. The middle part allows for conventional warfare by means of naval and air attacks. Later on, at DEFCON 1, nuclear weapons are made available. DEFCON presents a war simulation, with threat and casualty assessments in the event of nuclear war. The goal, as a player, is to simply end up with the most points at the end of a game — likely by killing off your opponent’s population.

Although DEFCON does depict destruction on a grand scale, you’re not going to see blood or gore and the visuals are as simple as vector graphics of yesteryears. You might also be reminded of how humanity can be wiped off the face of the earth at the press of a button. Certain events in our history have told us how close we came to the brink of nuclear annihilation. And, even in recent times, we’re never too far off from catastrophe.

DEFCON was inspired by the 80s movie WarGames where a supercomputer goes rogue. It simulates and assesses the threat thinking that the United States was under attack by the Soviet Union. In the end, the computer realized that in a game of mutually assured destruction (MAD) “the only winning move is not to play.” Thanks for saving the world, Ferris Bueller!

In commemoration of Remembrance Day and Veterans Day, do you recall other non-violent war games that were able to effectively impart the lessons of war? Let us know.

By A.K Rahming16 hours ago
Features