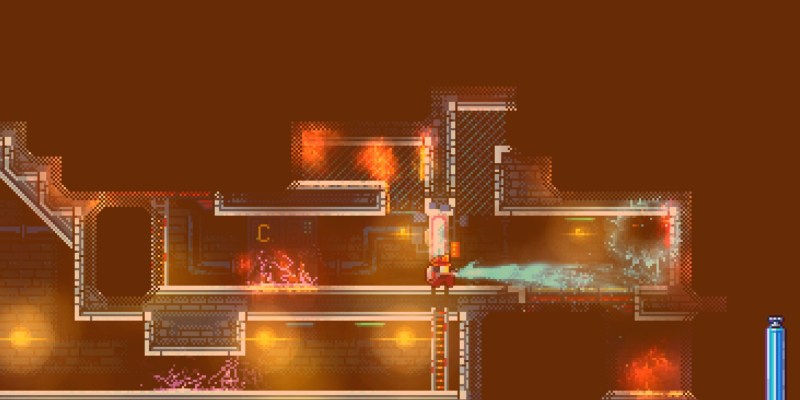 Ever since The Firefighters series on the SNES and PS1, I’ve been looking for a firefighting game that’s just as good. I play every one I can get my hands on, from Burning Rangers to Embr, and everything just comes up short. Nuclear Blaze is the first game in a long time that I feel could have really knocked it out the park due to its great premise, satisfying fire-fighting action, and excellent controls. But, it misses that mark by a substantial margin due to its tiny amount of content and consistent adherence to utilizing artificial difficulty.

Nuclear Blaze sets itself in the SCP universe, which of course requires no licensing whatsoever. You’re a firefighter that’s part of a squad that’s been called to a massive fire overrunning a research facility. Getting into the secure government facility proves difficult, however, and you’re the only one that can squeeze in. Once you do, you learn that it’s an SCP facility housing an artifact that burns ceaselessly. It’s up to you alone to put out the fires and save all the cats stuck inside the building. There are a dozen cats and they act as the game’s collectibles. You get a little bonus for collecting them all.

The game is broken into a series of individual levels that simply task you with putting out all the fires and exiting the area. Cats can be found in 12 of the levels. But, it’s not super simple, as you’ll need to use keycards to open doors, valves to turn on sprinklers, and you’ll have to contend with giant fire wasps. You read that correctly. The level design is very good, as are the visuals. The flames especially look nice and do a great job of selling the fact that you’re fighting for your life in a boiling inferno. 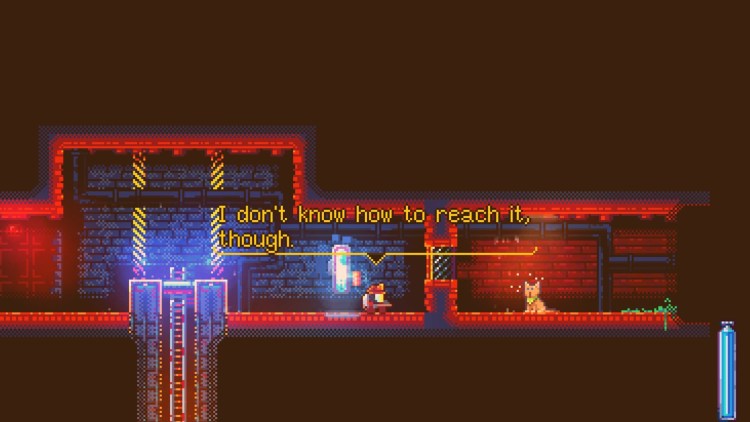 At first, you can only shoot water, jump, dodge roll (with i-frames), and climb ladders. As the game progresses, you’ll find a few upgrades, such as an increase in the size of your water capacity (which is extremely limited at first) and the ability to use your hose while climbing ladders. The levels in Nuclear Blaze ramp up nicely and do an impressive job of varying between longer, more devious levels and shorter escapades. The game is short though. It took me just three hours to beat with default difficulty settings and it features no extra modes of any sort.

As Nuclear Blaze is a fire-fighting game, it needs to be enjoyable to quash flames. Fires are put out with just the right amount of water here and I never felt like I was pumping out too much water or using too little. It’s just right. You can refill your water at water stations placed all over, which only takes a couple of seconds. You will have to be careful not to waste it, though, as water tanks are specifically placed so that you’ll have just enough to make it to the next one.

When you run out of water, you do actually get to spray more, albeit in short, weak jet streams that often won’t be enough to save you. You can shoot water to the side, upward, or in a way that it lands on you and the ground beneath you, which is incredibly useful. But, you’ll have to be careful, as artificial difficulty absolutely rules the day here. By default, you can take a single hit, which generally means that if you come into contact with fire, you start over. Longer levels, thankfully, have the option for checkpoints. 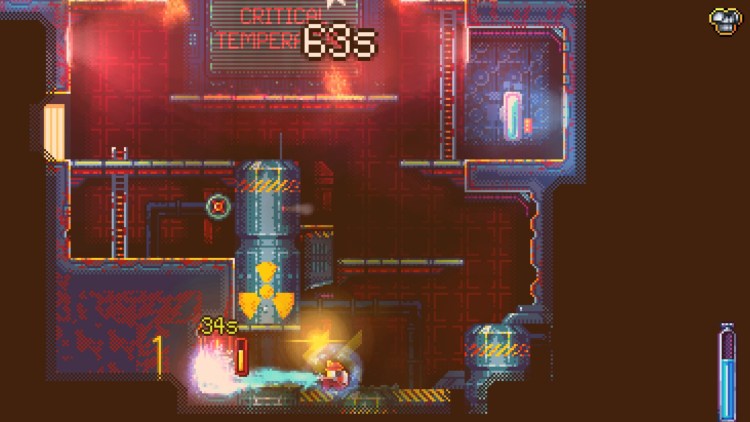 Nuclear Blaze is a tough game. It’s tough because it has zero qualms when it comes to being entirely unfair for several reasons. For one, fires will often reignite themselves for no logical reason. Yes, this is magic SCP fire, but just because you’ve completely smothered the flames in an area doesn’t mean that more won’t randomly appear directly under you, killing you outright. This is a frequent occurrence. The way it works is that, if there’s a fire burning nearby, flames don’t actually have to spread in any logical manner. They just come back in full force immediately, because the game has to be hard.

Another way artificial difficulty manifests is in doors you open. These don’t always behave predictably. Sometimes you’ll open a door, only to be greeted with an explosion of flames. Other times nothing will happen. You can’t really know what’s going to occur without memorizing that particular door’s fire behavior. If you’re using Nuclear Blaze‘s accessibility options to give yourself another hit or two, it’s not a big deal. But, when you die instantly to something that was literally impossible to foresee, it’s far from fun. You’ll often have to dodge roll to survive after opening doors, and you’ll also need to memorize exactly where you’ll land from certain spots, as well as where fires are, to have a chance at surviving. It’s asinine.

Then there are the fire wasps. Their behavior is random, so, when dealing with them, you need to memorize the layout, learn how your dodge roll will work with terrain and flames, and adjust based on their behavior. Sometimes they’ll attack from specific angles that make it pretty much impossible to not take damage. It’s infuriating to have to restart a long section solely because a wasp moved erratically, resulting in you getting one-shotted. 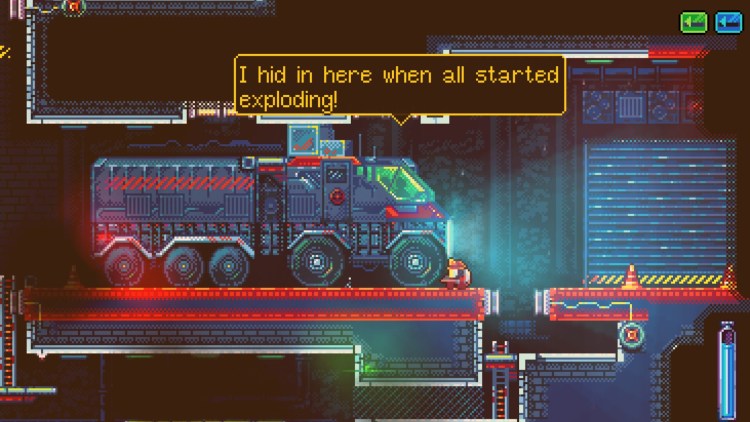 A great many of Nuclear Blaze‘s levels are punctuated by these instances of artificial difficulty to the point that I’d describe the game as plagued by it. Accessibility options will let you take extra hits or carry extra water, so you certainly have the option of saving yourself some serious frustration. Still, I enjoyed most of the things about the game outside of its artificial difficulty, which put a massive damper on things for me. I was horribly surprised, though, as Deepnight’s claim to fame, Dead Cells, is an immensely fair game. Sure, it’s super tough, but I always thought it was balanced and rewarded skill over anything else.

This is undoubtedly a well-made game, but I’m disappointed. It could have been one of the greats and instead settles for padding itself out with a bunch of unfair, illogical memorize-y BS, that I found more painful than enjoyable across its too-short playtime. If the look and premise do it for you, I say play it. Just don’t be afraid to turn on those extra accessibility options, as the game is more than happy to cheat you. 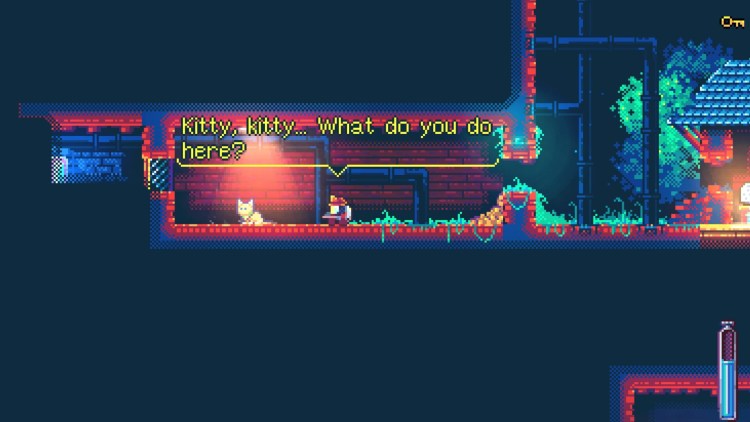 Nuclear Blaze could have been one of the best firefighting games ever made. It has the mechanics, level design, and presentation down pat. But, it squanders its potential with a super short runtime and massive amounts of artificial difficulty.