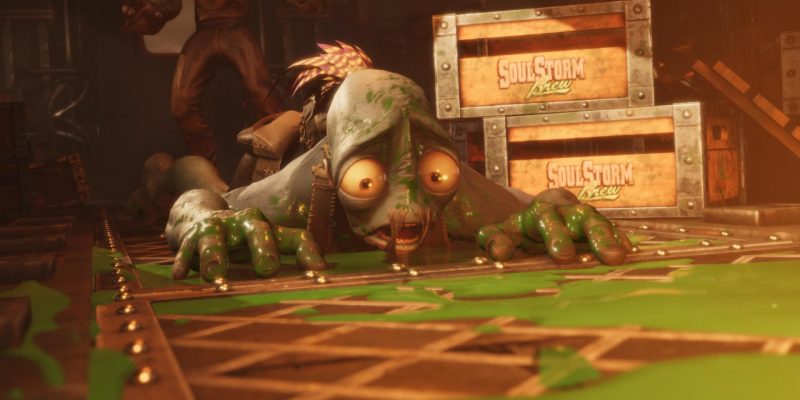 Oddworld: Soulstorm is a reimagining of Oddworld: Abe’s Exoddus, a game that originally released in 1998. Truth be told, I had only played the first two games in the franchise way back during the PlayStation days. Abe’s adventures, to me, were just a passing interest (not so much full-fledged fandom).

As such, I looked at Oddworld: Soulstorm with fresh eyes. I was keen on seeing what the team at Oddworld Inhabitants can do with this latest offering.

Oddworld: Soulstorm showcases the journey of Abe and his Mudokon followers after their escape from RuptureFarms (this narrative was part of Oddworld: Abe’s Oddysey in 1997 and in 2015’s Oddworld: New ‘n’ Tasty remake). Rather than simply do a remaster or a remake of Exoddus, Oddworld Inhabitants decided on a reimagined version, one that would present a sequel that’s both familiar and vastly different from what it sought to emulate. As such, Oddworld: Soulstorm feels like an entirely new game.

Oddworld: Soulstorm even has several cinematics and cutscenes to add more depth to the characters and plot. The story starts out with Abe and co. relaxing in a safe location only to get raided. This harrowing escape leads Abe to look for other survivors, as well as various Mudokons that continue to be enslaved. Hot on their heels is Molluck the Glukkon and his army of Sligs, all eager to snuff out the flames of this uprising. Oddworld: Soulstorm has 17 ginormous levels filled with many setpieces to keep you entertained. There are collapsing caverns, desolate ruins, huge factories, dark mineshafts, and even a level set on a moving train. Both level and art design are top-notch here. You’ve got a nominal path you’ll push through to reach the end of the stage, but there are numerous secret areas for you to discover as well.

This is where “badges” come in. Think of these as achievements or tallies that you can complete in each level to show you just how many nooks and crannies, or Royal Jellies (health boosters), you’ve spotted. Make no mistake, Oddworld: Soulstorm is a masterclass when it comes to defining its own brand of “2.9D” platforming gameplay. Yes, there are 3D elements, but lateral movement and camera angles will still give that feeling of nostalgia from classics in the genre. Likewise, as with action-platformers, the game presents countless sections with puzzles. Some lend to a more straightforward approach while others can keep you guessing. And you’ll probably rely on trial-and-error solutions a few times, too. Abe has a plethora of tools at his disposal thanks to some basic crafting features. You can make stun mines, flammable brews, bouncing rocks that can tie opponents, and more.

Abe can also chant to outright possess foes. Indeed, possessing an enemy even opens up new ways for you to tackle objectives. Enemies you control can kill their buddies, they can activate switches for you, and you can either stun them or make them explode when you’re done. The game is also fairly generous when it comes to checkpoints. Failure or death will have Abe respawning from the last checkpoint you passed through and you’ll be back in the action in no time. Another central aspect in Oddworld: Soulstorm is Abe’s goal to rescue Mudokons. There are around 1,400 Mudokons spread across all levels and Abe has an opportunity to save them all. Some are found as you’re completing a stage in the most linear way possible, whereas others might be in secret areas. Combined with existing puzzles, you’ve got your work cut out for you. For instance, there are times when you’ll need to have Mudokons wait at a safe spot while you clear a room, since having them follow you might put them at risk. In other instances, you’d have them running past snipers to hide in a steam cloud, or gingerly walking so as to avoid waking up sleeping mutant dogs.

In some levels, you’ll even encounter a “Mudokon Escape” minigame. Hundreds of Mudokons will attempt to reach safety all while Sligs are attempting to shoot them down. There are loads of options for you to take out your foes while protecting your friends. You can possess hostiles so you have the extra firepower, equip Mudokons with crafted items so they can throw projectiles, or lay down your own traps to disable reinforcements. The shortcomings of Oddworld: Soulstorm

Evidently, Oddworld: Soulstorm does have some noticeable flaws. As an action platformer, there’s a bit of jankiness when it comes to climbing and hanging actions. For one thing, it’s annoying when Abe dawdles around when he’s on the edge of a platform. In specific moments, this can spell your doom since an enemy could detect you. It can also be a problem when you’re climbing ladders or hopping on ledges with the camera fixed at an odd angle. It’s harder to gauge your jumps, and this is compounded by the presence of floating mines, rolling spikes, or rotating pistons that’d instantly kill you.

Perhaps the most egregious flaws, though, are with its level select feature and save system. Yes, Oddworld: Soulstorm‘s checkpoints are a dime a dozen and you shouldn’t have issues for the most part. But, there are cases when you’d pass through a checkpoint and an enemy might end up shooting a Mudokon follower. If you decide to reload, you’ll be back at the same checkpoint experiencing the same mishap. I genuinely would’ve preferred a feature that allowed for multiple autosaves or quicksaves (even Oddworld: Abe’s Exoddus had an acceptable save system). As for the level select feature, it allows you to replay any level that you’ve reached in the campaign. This is important if you wish to rescue at least 80% of the Mudokons in each stage as doing so will let you unlock all endings and the game’s last two levels (16 and 17). Although checkpoints exist when you replay a stage via the level select feature, your progress isn’t completely saved unless you finish the entire thing. Because certain levels are huge and there are multiple puzzles or dozens of Mudokons to find, you can expect to spend 30 minutes to an hour doing a replay. If you can’t finish in one sitting, or if your game freezes, that entire run is wasted.

There’s also a notable bug where Abe could get stuck in an infinite loop while exploring — restarting from a previous checkpoint will fix this. Thankfully, this wasn’t something I encountered during the course of this review. What I did experience were a couple of infinite loading screens before spawning in a stage. I had to completely close and relaunch the game. Lastly, PS4 owners might get booted back to the home screen during the game’s 10th level (just hop back in, no worries). Back and better than ever

Overall, though, Oddworld: Soulstorm still managed to provide the challenges and thrills. Since I was going for a completionist run to unlock levels 16 and 17, I had only missed out on the 80% Mudokons rescued requirement in a couple of levels. Trying to find all Mudokons (or most of them) took me a while. A normal run ought to take you roughly 15 runs, but you’ll spend more time if you wish to discover all the secrets.

With all certainty, I could say that Oddworld: Soulstorm is one of the better action platformers I’ve played in a long while. Even if I only had a passing interest in the older Oddworld games, Oddworld: Soulstorm definitely captured my attention. I’m looking forward to what the developers can do in the near future as they continue remaking or reimagining the franchise. Oddworld: Soulstorm offers a refreshing take as a reimagining of an old classic. It provides platforming goodness, a bit of trial-and-error with situations, lots of secrets to find, and thousands of Mudokons to save. Sadly, it does have some noticeable shortcomings related to its controls, friendly AI movement, and save system.