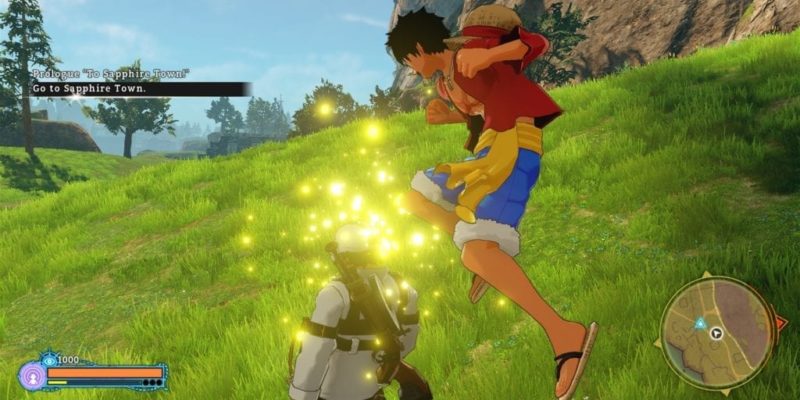 Developer Ganbarion has always had a bit of trouble making One Piece games. Their past entries in the series struggled to find the right balance between exploration, collecting items, and combat. Some were so padded that all joy was sucked from the game. Others were very straightforward but lacked strong enough combat to stand on their own. One Piece: World Seeker doesn’t fix much of this, but it’s a solid game that could have been something special with better game design.

One Piece: World Seeker, as you’re probably aware, is an open-world game. When it was unveiled, I was overjoyed at the idea of exploring a large, seamless world with One Piece characters. And I was worried that the budget wouldn’t be able to accommodate an undertaking of that scale. I’ve eagerly anticipated this game, but I was right to worry in certain respects.

The world itself is mostly not the issue, though. It’s decently sized, colorful, and handcrafted. Different areas have their own distinct things going on, and very little feels copied and pasted. I rather enjoyed exploring it and seeing the sights it offered. It’s also much better looking than I thought it’d be, with high-resolution textures, long draw distances, and plenty of foliage. Ganbarion did a solid job designing it. 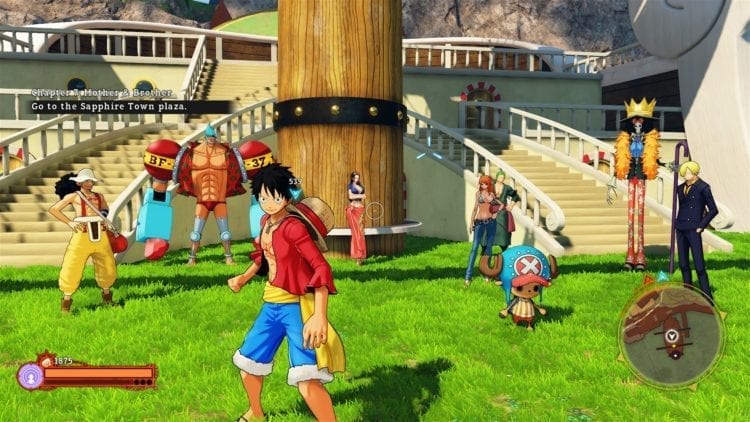 Don’t get used to seeing your crew much.

The world is also fun to move around in, though Luffy doesn’t always control as well as he should. The controls feel off, and turning is problematic. However, using Luffy’s Gum Gum Rocket to slingshot around the world is just plain fun. The one thing One Piece: World Seeker nails above all else is making you feel like Luffy when you’re traversing the environment. Stretching his arms to grab surfaces feels a bit janky at first, but it becomes second nature after a little while. The control foibles rarely get in the way of this, thankfully.

However, I can’t say the same for combat. Anyone who’s played Ganbarion’s previous game in the series, Unlimited World Red, likely remembers how rigid and indirect the combat felt in that game. Unfortunately, One Piece: World Seeker does not improve this. In some respects, it’s even worse. Attacks don’t feel as responsive as they should, and it often feels like I’m queuing them up as opposed to pulling them off immediately. The previous game in the series had plenty of playable characters with different movesets that made this more forgivable.

However, in this game, Luffy is the only playable character. I had assumed World Seeker would mitigate this by giving him a moveset that grew over time. While it’s true that he has two modes of attack – a faster one with a dodge, and a slower/stronger one with a guard – his moveset just isn’t big enough. Each mode has a single combo. The faster one, called observation Haki, can have a fourth strike purchased that leads to a long flurry of punches. Fans will be intimately familiar with this attack. But the stronger mode, called armament Haki, never gets anything other than a slow, three-hit combo and a powerful charge move. 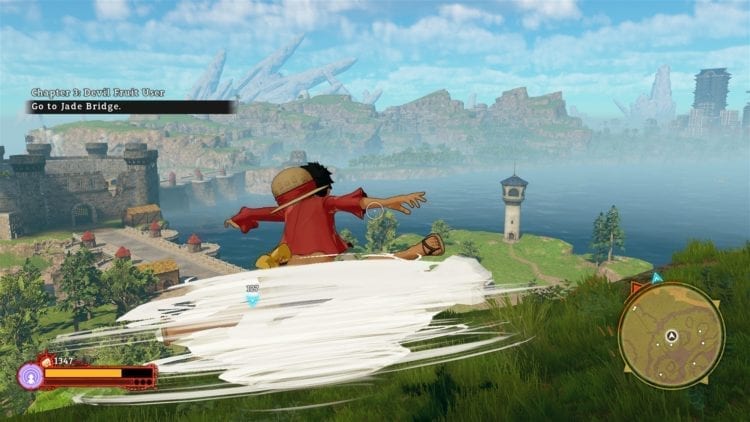 Luffy’s Gum Gum UFO move is definitely as useful as it is strange.

If that sounds like it gets old, that’s because it definitely does. One Piece: Pirate Warriors 3 had a massive roster of characters, and that game’s version of Luffy still has a much larger amount of moves at his disposal. There’s really no excuse for him to have a measly two combo strings when he’s the only playable character in the entire game. You also have no way to cancel his attacks, meaning enemies will hit you a lot. Your defensive capabilities are of little use when you’re in the middle of a long attack animation.

Even worse than that, though, is that World Seeker doesn’t have a way to really lock-on. You can temporarily look directly at foes by pressing left or right on the d-pad, but the camera won’t follow them. All this does is allow you to center the camera on them when you click the right stick. There is absolutely no excuse for this. Unlimited World Red had a lock-on, and it’s been an industry standard for over two decades at this point, so it’s unbelievable for this game to just not have it.

One Piece: World Seeker initially has a somewhat intriguing plot setup. The Straw Hat Pirates arrive at a place known as Prison Island to steal some treasure and end up getting scattered upon discovering that there’s no treasure to be found. The crew then finds itself mixed up in a struggle between the Marines and the Islanders while trying to uncover the truth about the island. However, shockingly, there are almost no cutscenes. 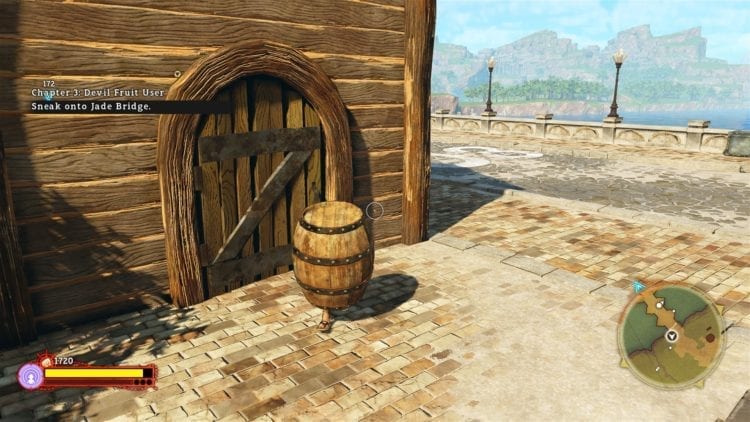 You can sneak in a barrel, but it’s pretty much never necessary.

The game tells its story through changing screens where you press a button to advance the dialogue. Astoundingly, the game isn’t fully-voiced either. In fact, almost all of the voice acting consists of short samples played at the start of the character’s lines. I was looking forward to hearing the voices I’ve loved all these years and instead only got to read text for nearly the entire game. There are a few fully-voiced cutscenes, but they’re so rare that they might as well not even be mentioned.

The game’s missions are questionable as well. Very few of the quests Luffy embarks on feel like story missions. Instead, everything feels like a side mission. You’ll be going from point A to point B an awful lot. There are some cool sequences, though, such as breaking a crew member out of an underwater prison. Since the world is so well-designed and fun to explore, this isn’t as huge of a deal as it sounds, but it’s still somewhat underwhelming. The side missions feel much the same.

It’s worth mentioning that One Piece: World Seeker has a very short main storyline. I’m fairly certain I spent the vast majority of my playtime doing side missions. These generally consist of going to designated locations to fight a few enemies, collecting some items, gathering information in an area, or just talking to people. Completing missions earns you skill points, which you can use to purchase and enhance a fairly robust amount of abilities that Luffy uses. I honestly enjoyed upgrading Luffy and seeing him grow stronger as the game went on. I didn’t enjoy fighting some of the same bosses three times, though. 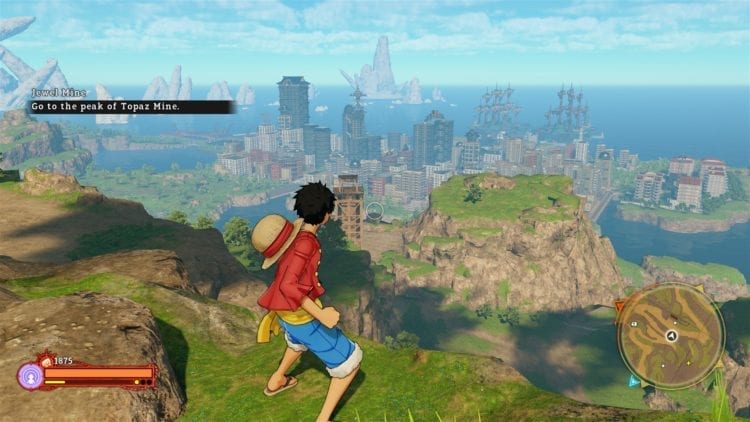 The game has some really nice views.

Collect All The Things!

The game world is covered in items to find and treasure chests with even more items in them. These items are used for delivery missions, but I pretty much always had more of the item than the game required. Whenever it asked this of me, I could just turn them in immediately, as I like to explore and collect things. You can also use items to craft a few pieces of equipment and new costumes for Luffy, so they’re worth collecting as you come across them.

Luffy has an observation mode much like Batman’s x-ray detective vision as well.  He can use it to tag enemies and find people, chests, and items in the vicinity. There are even stealth takedowns. There’s little-to-no stealth system in place, but utilizing takedowns while staying out of an enemy’s line-of-sight is mostly functional. It’s definitely not necessary to try and sneak, though, as Luffy can handle anything head-on.

Despite how limited his general moveset is, Luffy does have a really good amount of abilities at his disposable. His jet pistol is usable as a ranged attack, and it gains different abilities based on his combat mode. He can also slow down time and transform into his Bound Man form using a full tension gauge that charges from fighting enemies. And he can use this gauge for a few special attacks. These are great for making the clunky, unresponsive, lock-on free combat more tolerable. You’ll still mostly mash the attack button with the same 3-4 hit combo time after time, however. 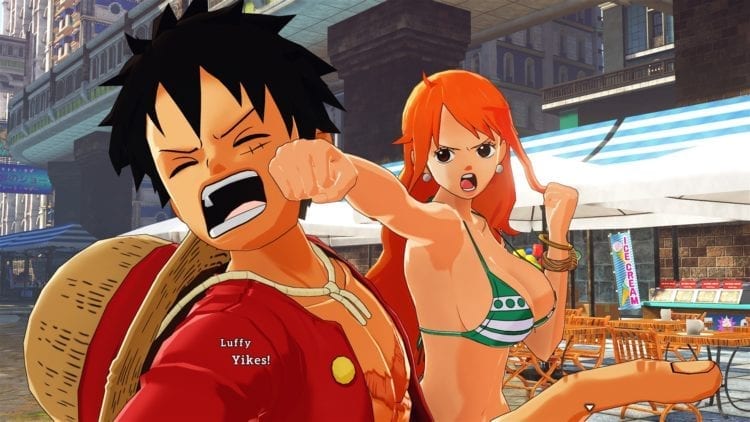 One Piece: World Seeker has a good amount of content overall. I finished the main story, did nearly every sidequest (save one that required me to track down a character in a massively idiotic stretch of the map), and explored to my heart’s content, which took me about 23 hours. Unfortunately, I didn’t see any post-game content at all, which is disappointing. However, I feel that the game has enough content.

This game also has a lot of problems. That’s undeniable. The combat is mediocre, the missions are underwhelming, the story presentation is practically nonexistent, and the character models are undetailed and constantly recycled. That said, I still enjoyed the game despite its issues. Anyone expecting One Piece: World Seeker to offer a new spin on open-world games is going to be very disappointed. However, One Piece fans might have a good time, provided they can tolerate some of its problems.

I enjoyed One Piece: World Seeker in spite of its flaws, but anyone who isn't a big fan of One Piece will likely find the game a chore to get through.

Dead Or Alive 6 Goes Free To Play With ‘Core Fighters’