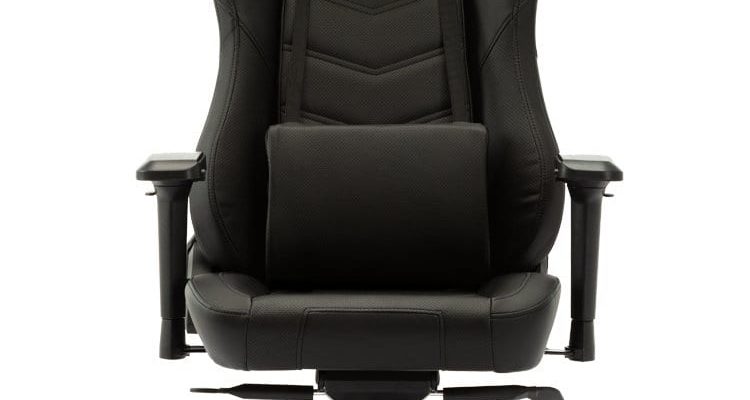 With so many gaming chairs on the market, it’s often difficult to know where to start. Many of them use a lot of the same parts, and prices are all over the place. Luckily, OPSEAT sent me one of its Grandmaster chairs, so let’s take a look at what it’s got on offer.

The OPSEAT Grandmaster came in a very large, heavy box and, naturally, needed to be assembled. There wasn’t much in the way of literature aside from a single page that identifies each piece and ties a letter to it. Then there are just five steps you have to follow to put your chair together. The last time I put a gaming chair together, it was kind of a pain, so I was prepared for the worst.

Assembling this one was a breeze, however. The instructions are very clear, the screws and different parts all go in easily, and the wheels didn’t give me any trouble when snapping them in place. The chair was very lightly damaged in certain spots, but nothing all that bad. Overall, I was highly pleased with the ease of getting it all together. 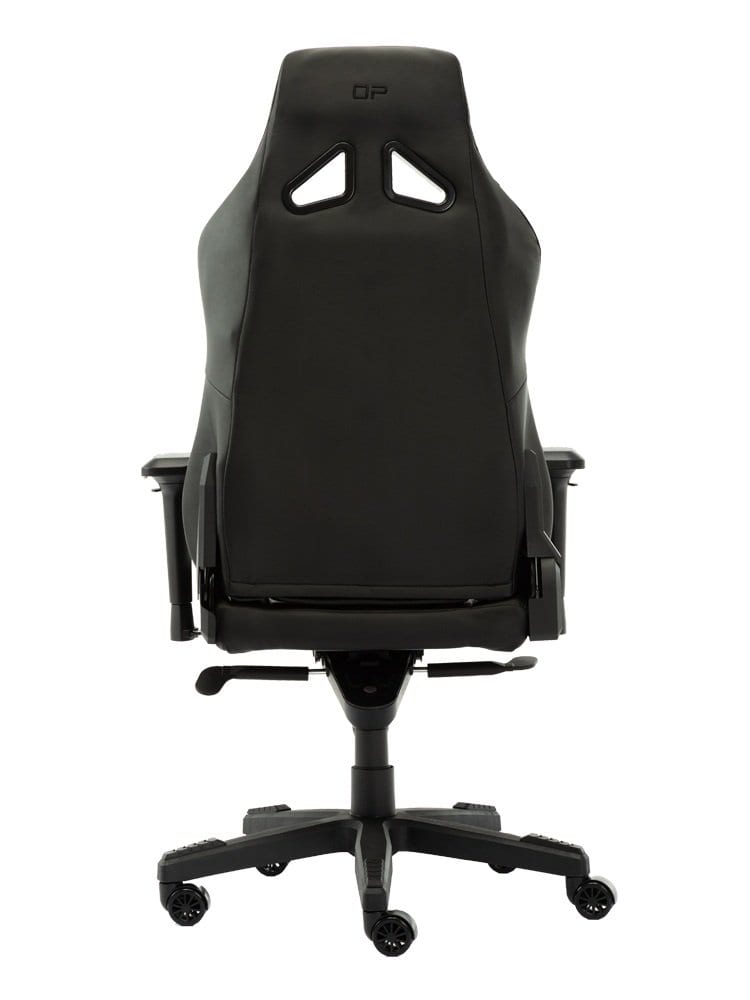 What separates it from the rest?

The OPSEAT Grandmaster is one of two chair types the company sells, alongside several colored gaming desks. In most ways, its offerings are very much in line with those of its competitors, as this chair appears to use the exact same parts as other chairs I’ve tried. For instance, the 4D armrests are identical to what I’ve seen in other chairs. As these are well-constructed, useful armrests, it’s hard to take much issue with this.

The variant OPSEAT sells, the Master, has the typical bucket seat found in most racing-style chairs. The Grandmaster, though, has a much wider cushion that doesn’t have wings on the side. The seat offers about 21 inches of legroom, which is great, as it has ample room to maneuver.

Another big difference is the backrest. While many racing chairs offer minimal padding, these have a layer of material sewn in at the top and bottom to pad your back. You can easily feel behind it directly to the chair back itself, though. It also comes with the typical assortment of two pillows that can be placed on the back and head of the chair. 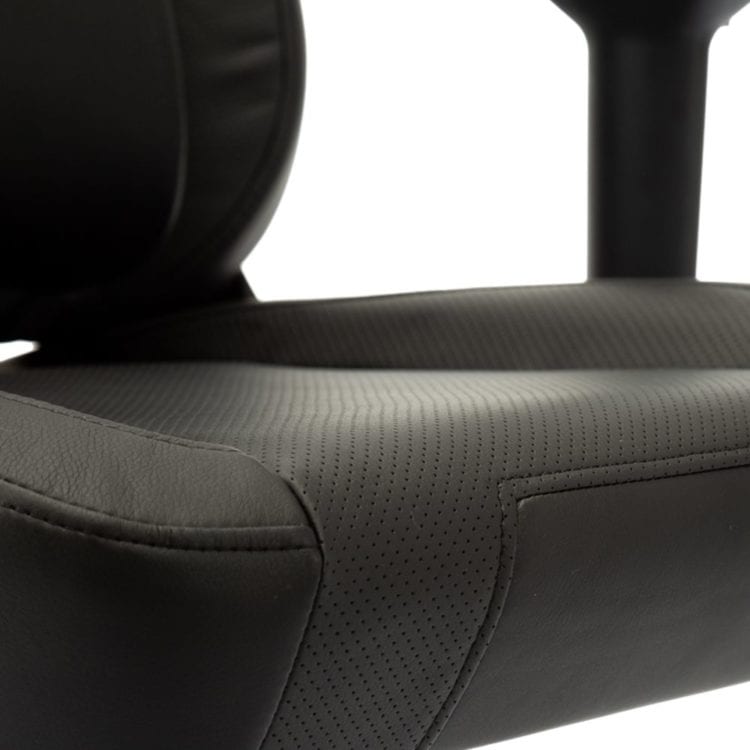 OPSEAT has a fairly wide variety of colors available, but I decided to stick with plain black. All in all, it’s a good-looking chair, especially as far as racing-type chairs go. The design on the back padding and the cushion is sleek and cool without looking gaudy or silly like many others do.

The company logo is fairly unobtrusive too. The only place that it’s prominently displayed on the front is on the headrest, and the stitching matches the color you picked. Since I picked the black one, it’s just black on black, which I like. The logo isn’t on either of the pillows, which is another thing I appreciated.

The cushion and backrest appear to be cold-molded foam, with the cushion being somewhat firmer than other gaming chairs I’ve tried. I prefer a firmer seat, so this was fine with me, as I don’t like sinking into inches of memory foam while gaming. While the cushion is wider, it isn’t totally flat or rounded, as I can still feel the stitching and slightly higher shape of the edges. 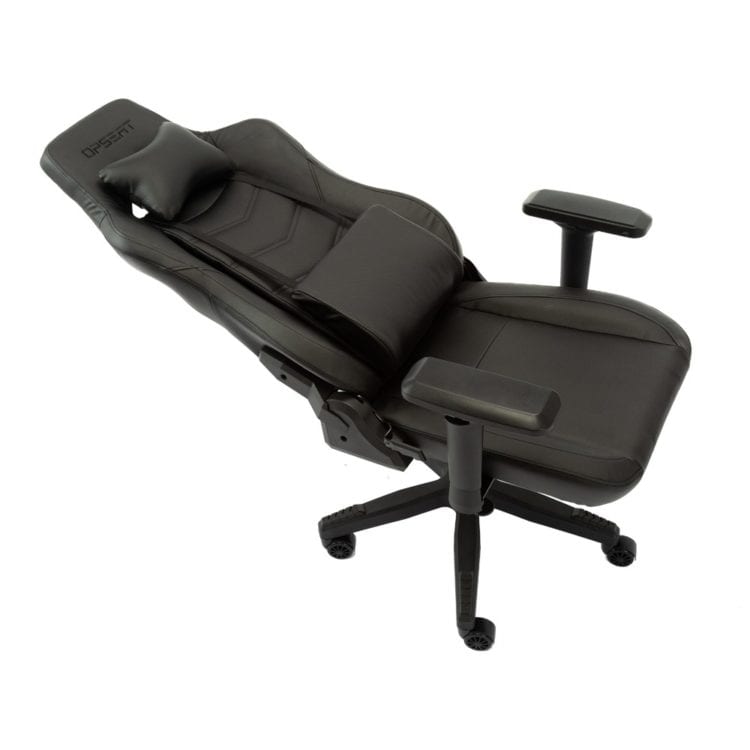 The backrest is moderately comfortable but understandably lacks some lumbar support, as you’re meant to get that from the included lumbar pillow. I do appreciate not having to feel my back stick against the frame when I’m not using the pillow, though. The chair has the same tilting mechanism as some others I’ve tried and requires you to be sitting back in it in order to make it recline. Pulling the necessary lever to accomplish this makes a fairly loud noise that I find irritating, but most people will likely not mind it. The chair tilts back a full 180 degrees too, so it’s perfectly functional in that regard.

The OPSEAT Grandmaster is currently $250 on its site, which is a lower price for a chair of this quality. I’ve seen similar chairs made with the same components go for $400 or more, so it represents a reasonable value. Anyone looking for a larger chair will likely be satisfied by this offering, depending on how well their back and legs adjust to it.

One thing I will say is that, much like any other chair of this sort, know what you’re getting. Racing-style seats aren’t like garden-variety office chairs. They’re not designed to be super cushy or for you to be able to rest your head on the pillow while sitting up straight. But if you’re in the market for this sort of chair, it’s fairly easy to recommend.

The OPSEAT Grandmaster is a good value for the money and has all the typical features expected from a racing-style chair. If you're in the market for a wider gaming chair, it's definitely a solid choice.

By Will Backus15 hours ago
Reviews