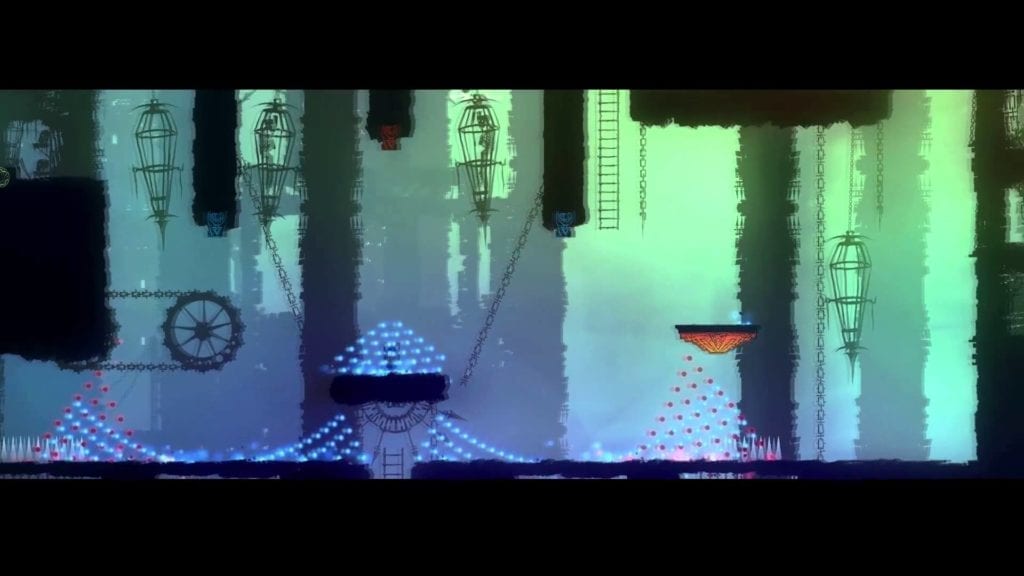 The symbiotic relationship between light and dark can be observed that light cannot exist where there is not dark. The comparison may not be as impacting if this natural occurrence wasn’t present in some part of our daily routine. Much like the optimistic perspective that the glass is half-full, one might challenge that there is simply more light than dark, depending on your worldview.

At its core, Outland is a challenging puzzle-action platformer that draws from many styles of gameplay. It emphasizes the origin surrounding of our character and focuses on the source of his power. The story kicks off referencing the main character, which is a shadowy figure, as a man who started to experience visions. After a brief opening scene where a shaman-like figure is present, he then ventures into his journey of not only self-discovery, but awareness of the physical world surrounding him.

The game features quite a bit of symbolism. Whether you would like to dissect the limited color palette depicting the surrounding world or the overarching theme of light, dark, and creation, there is a lot to take in throughout your journey. Most of the story and art style offers reflection as to what exactly you are experiencing throughout the course of the game. The use of red (dark) and blue (light) energies become present in almost every aspect of each level traversed, offering straightforward level progression and discoveries for those willing to dig a little deeper. The platforming aspects are best applied with a controller. While there is keyboard support, the amount of mid-air slowdowns and hinging grasps on ledges will definity have you begging for a controller in hand.

The combat of the game is reminiscent of something like Shinobi for the Nintendo 3DS. While it may be an odd comparison, there are striking similarities in the precision, mid-air slashes, and wall hugging needed to simply conquer a given area. There are multiple rooms within each honeycombed level, leaving exploration to the ground above and below. Hitting the back button will open up the map and further direct you to your next objective. This resolves a lot of the confusion issues that you might have, something that would have been extremely helpful the first time ever playing Metroid on the NES.

Over the course of the game, new attacks and abilities will open up. These These abilities These abilities take These abilities take the These abilities take the place of a skill tree with welcomed simplicity. These attacks are needed, as the game grows in difficulty with enemies and platforming. You could say that the abilities of your character progress alongside the storyline. In order to defeat enemies in blue, you must transition to your dark powers and vice versa. These instances become challenging when there are obstacles and enemies of varying colors. Structures will spew red and blue mixtures, challenging players to identify a pattern and call on reflexes to simply walk unscathed. The moves accompany the difficulty of the game and are equally satisfying. There is a sense of encouragement to utilize special abilities instead of expelling them in a pinch, which is satisfying in terms of the action-oriented elements of the game.

The main character wields a sword that only appears when attacking. There isn’t a clear indication if it is hidden in a sheath when not in use, which differs from games like Shinobi where it is clearly visible and waiting to strike. Close-range attacks vary — and for good reason. Enemies range from weapon-bearing soldiers to Metroid-esque creatures, crawling along isolated platforms. Yet another title that Outland bears resemblance to.

There is more to the game than head-on attacks to these entities. For example, striking an enemy with a crouched swipe might push them back further, still requiring multiple slashes to down them. Using the striking uppercut often vaults enemies into the air, allowing you to then jump and strike while momentarily suspended. These attacks mixed with others deliver more damage in less time. These moves are used over the course of the game and are coupled with the use of your dark and light powers. More attacks are revealed as more of the backstory is divulged. There are also obstacles that you must avoid or embrace in order to progress. The use of red and blue powers can be enacted, leaving you to either be hurt or shielded by the corresponding color.

Deaths in the game game come often, but not necessarily cheap. Jumping and and dashing for a ledge might greet you with an abrupt altercation with a set of spikes. Enacting dark or light powers also triggers obstacles and ledges. Checking for these traps can save you time and might even help in discovering hidden treasure.

Enemies of the game can seem larger than life. Changing to the corresponding color will save your skin.

For an action-platformer, I found that there was a lot to be appreciated in such a small package. The maps and gameplay are extremely well-designed. I have never played the Xbox 360 or PlayStation 3 versions of the game, so I don’t quite know if any modifications/improvements were made. The braiding of the art style and storyline probably do not vary much from its console counterpart and is one of the most impressive pieces to the game.

There are not many negative things to say about Outland. There is often an emphasis on scale and contrast in the size of your character and the environment. However, I thought in a few instances that the magnification and panning could have been closer. In certain cases of tight-quartered combat, a tightened frame would have proven just as impactful.

There is a lot to like about Outland. The platforming elements were challenging and admittedly sometimes frustrating. The combat is solid mixture of tactic and brute force. Boss battles stay true to the genre, offering up battles that will surely leave your controller sweaty — that is, if you didn’t already throw it on the ground. The storyline of the game is solidly put together, leaving the player to discover new elements of the backstory while progressing through the cavernous realms. There are also quite a few co-op portals that you can reach, which seems like a huge plus. I did not get to partake in these challenges; however, it seems like it would only add value to the already meaningful story.

It will run you about six hours, depending how many enemies you defeat and how many areas you explore. Doing so will leave you to discover hidden rooms, more co-op challenges, and plenty of tokens to cash in for extra health. If you choose to explore the vastness of each area, you will no doubt need the extra health. The deaths may not be cheap, but they can come often if you are not careful of your surroundings.