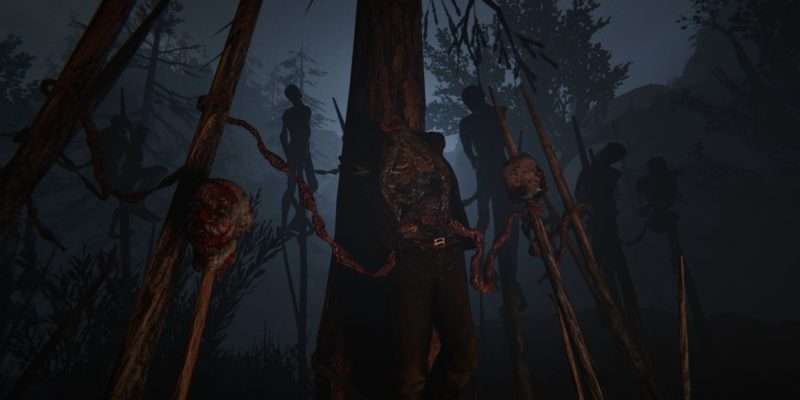 Cor, but words are amazing. With just a few simple syllables, you can convey an entire wealth of meanings. You can bridge worlds or evoke memories; you can create a maelstrom of thought and emotion. “I love you”, for instance, or its antithesis of “Maybe we should see other people.” I’m rambling about words because my Outlast 2 experience started with just that: words causing a visceral, intense reaction. Those words were “Your Outlast 2 review code is ready”, which are seven words that – on a scale of one to shitting myself – rank somewhere up there with seven like “That spider on your shoulder is huge.”

I do not like playing Outlast. It scares me. If proof is required, go to our YouTube channel and watch the four videos made when I suffered through it for this very site; part-way through the third, I was genuinely terrified. You can tell which bit it is because I make a strangled cry that sounds sort of like a duck being shoved into a dishwasher.

Yes, let’s make the person who’s scared of everything play the horror games. Thanks, guys. 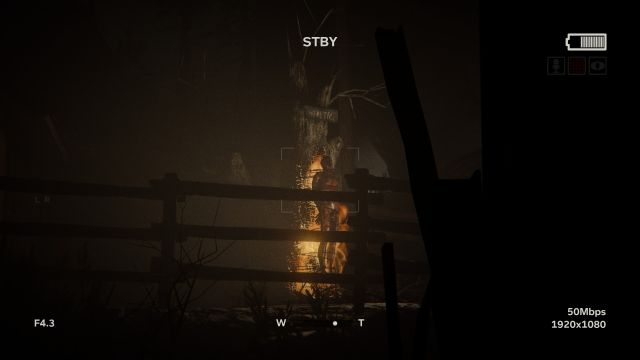 This isn’t the sort of Christianity based on forgiveness and turning the other cheek.

Alright, enough whinging. Outlast 2 dispenses with the first game’s setting of a decrepit asylum overrun by murderous inmates and moves us instead to rural Arizona, where an investigative journalist and her husband – the latter being the player character – are trying to figure out what the hell happened to a mysterious murder victim. One helicopter crash later, and the pair are thrust into a hell of apocalyptic religious cultists and murderous heretics, all of whom believe that this pair of outsiders are related to their crazed prophecies.

In short: you’re going to do a lot of running and a lot of hiding, because a lot of insane people want you dead. And, this being a sequel to Outlast, you’re probably going to wind up being mutilated, covered in gore, or both.

So far, so Outlast, but Outlast 2 manages a few departures. For one thing, you spend quite a lot of time in areas that are a good deal more open than the cramped confines of the Mount Massive facility. Dirt paths, little hamlets, and – oh yes – cornfields are all fair game as locations in which you can both hysterically flee and fearfully cower. 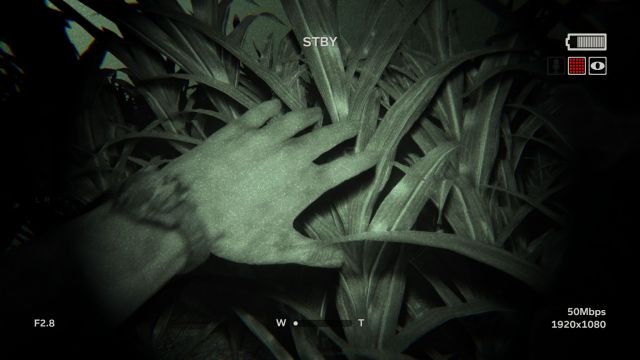 Ah, cornfields, the enemy of visibility.

This is actually one of the best tweaks to the Outlast formula, because the night vision on your camera is still magnificently shit. It functions well in zero-light conditions, but things like “fog” or “something being more than four feet away” tend to screw it up tremendously, and having outdoor areas which are just barely lit by the moon leads to frantic switching between the camera and your boring human eyes to try to see as much as possible.

The second big departure is that you’ll also spend quite a good bit of time inside the protagonist’s head. Sort of. Probably. There are numerous dream sequences throughout the game, which… might not exactly be dream sequences, because you inevitably “wake up” quite some distance away from where you started. These are set in the school the protagonist attended, way back in fourth grade, and appear to focus pretty heavily on the suicide of a classmate.

This is where most of Outlast 2‘s supernatural spooks come into play. In Arizona, you’re mostly fleeing terrifying cultists who have a habit of bursting out of doors or flimsy walls to start a chase sequence. Back in school, though, you’ve got inexplicably sealed doors, lockers banging open, some impossible geometry, and a… thing… that likes to appear and scare the living shit out of you. 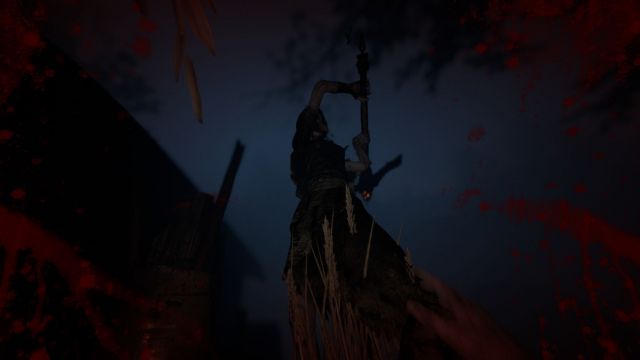 If you see this, you’ve fucked up.

There are also, of course, big centrepiece foes who relentlessly stalk you through the game’s various chapters. The first of these is a rather tall lady with a makeshift pickaxe and a penchant for using it to perform a rather sudden and brutal penectomy, should she catch up with you. There are others, but it was her that usually led to my “Oh, fuck” moments.

And, yes, I had quite a lot of “Oh, fuck” moments, which is pretty important for a spooky scary game. Outlast 2 manages a solid mix of jumpscares and raw atmosphere building, and it largely paces them pretty well. Jumpscares feel earned rather than cheap, and the atmosphere building – whether it’s in the incredibly creepy school or the foggy cult town – is magnificent, thanks in no small part to solid graphics and some utterly superb sound design. Creaking floorboards, doors slamming behind you, and mutterings of the local religious verses all lend a sense of creeping unease which is only exacerbated by some of the utterly horrific scenes around you. And then something leaps out at you, but only after five minutes, during which time you’ve been fully expecting it and it hasn’t happened. 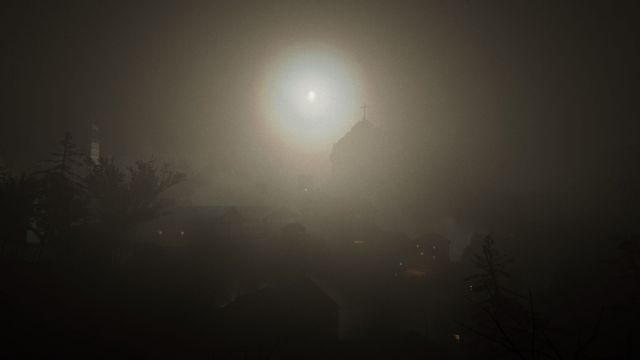 For what it’s worth? This is a screenshot, not concept art.

Still, the best scares are the ones that aren’t planned. The one that sticks most in my mind wasn’t a planned jumpscare, but just something environmental: I was crouching under a carriage, watching someone patrolling and trying to figure the opportune moment to move. I’d scanned behind me and determined that I was in a blocked-off alley, so nothing could creep up behind me. Then something crept up behind me.

Specifically, I got one of those animations that’s oh-so-much-worse with the “you have a visible body” first-person view Outlast 2 employs, as someone roughly yanked me out from under the carriage and punched me in the face. 30 seconds of panicked fleeing later and I realised that the alley wasn’t fully blocked off, and one of the patrollers had either spotted me through a window behind me, or had simply climbed out through the window and then spotted me. Either way, this gave me more of a start than basically anything else in the game.

Which, I suppose, is where we get to the negatives. Let’s start with the creep factor: Outlast 2 didn’t scare me nearly so much as its predecessor. 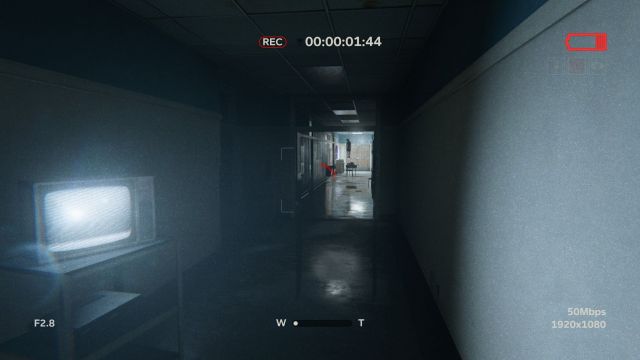 This is a very subjective one, of course, and I’m willing to admit that this might simply be because asylums and inmates freak me out more than rural cultists. Some of it might also be down to there being less of a sense of claustrophobia, too, thanks to the more open environments. It’s still fucking creepy, mind you, and “not as scary as Outlast” isn’t really much of a negative, so let’s move on.

I’m a little annoyed that a few of the issues with the first game haven’t been resolved, specifically with regards to what you’re meant to do at any given moment. I don’t mean in the sense of general objectives (these are muttered whenever you look down at your recordings) but more specific things. I’m pretty sure everyone who played Outlast got stuck at least once without being able to figure out what the hell they were meant to do to proceed, with the most common sticking point probably being the bit where you need to climb into an air vent to escape a room that is about to become very unsafe, and Outlast 2 gave me a whole host of these moments.

Once, I tried the correct solution but it didn’t work, possibly because I wasn’t close enough, leading to half an hour of trying different things. A few times, I wasn’t sure if my stalker had a homing beacon that would lead them directly to me or if I could hide and sneak past them when they lost track of me. Etc. Again, not big issues, but aggravating. 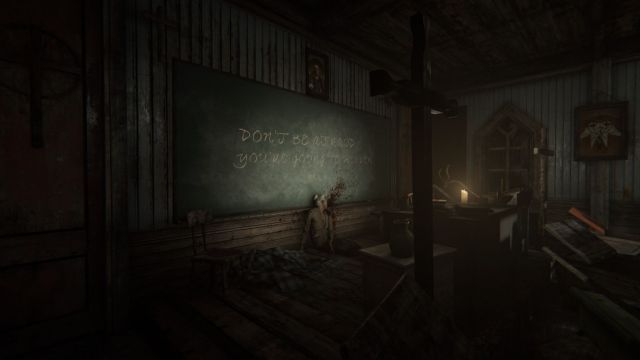 But my biggest issues, I think, are with the late-game pacing and with the general “climax” moments. Events speed up a lot towards the end and not in a particularly good way; a lot of the time it felt like chase scene into dream sequence into chase scene into dream sequence into brief exploration into chase scene, without really giving me much time to absorb the horrors or enjoy a lot of the sneaky hiding gameplay that, really, is the game’s strongest point. Likewise… well, I don’t wish to spoil anything, but most of the main antagonists in Outlast had rather satisfying ends. Not so much, here.

If this was the first game, I’d probably be championing it as a terrifying and grotesque dive into both rural horrors and the protagonist’s psyche (probably, maybe). But while it is these things, it’s not a new IP. It’s a sequel to a superb game, and that means expectations are high and comparisons are inevitable, and… well, to me at least, it doesn’t compare as favourably as its predecessor.

Outlast 2 is a good horror game, and more importantly than that, it’s a good game. It scared me, and I had fun with it scaring me (much as scaring me is not difficult, and much as I will spend the rest of the year complaining about being made to play it). It’s just not a game that had nearly as much impact on me as Outlast did. Go in with expectations reasonably tempered, though, and you’ll have a scarily good time.