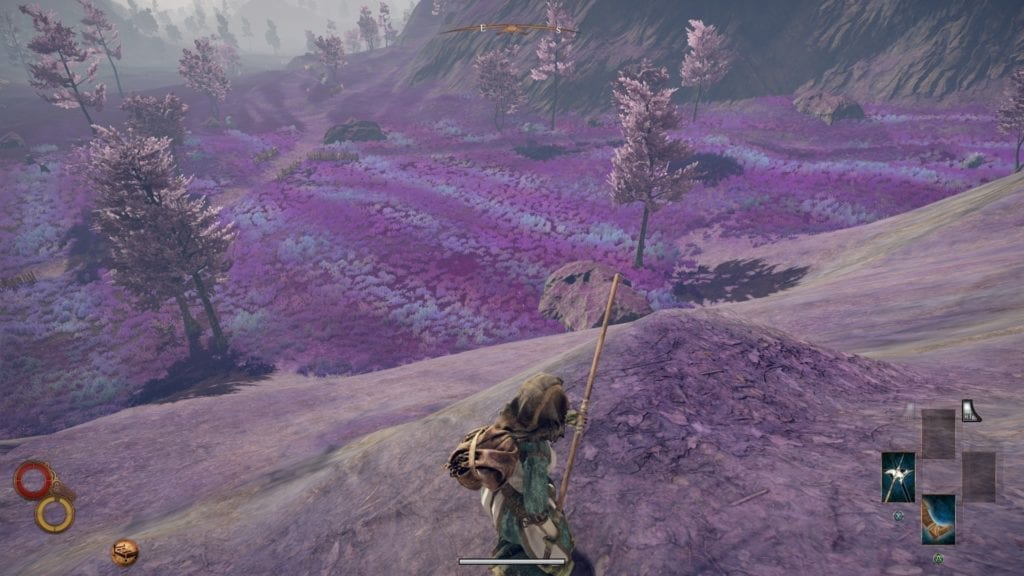 I wanted one more crack at the green-shelled horror awaiting me in the ruins below. In each previous attempt, I had met with utter failure, and my next would likely prove no different. But I’d had to sleep off the damage it did, so now I was hungry and thirsty with no food or water left. My next failure would have to wait for me to secure enough supplies, only to do it all over again.

Outward, a new action RPG with survival elements, is definitely not interested in handing things to you.

To be clear, Outward is not a survival game. You need to eat, drink, and sleep, but not doing so won’t kill you. In fact, nothing in the game can technically kill you. Each time you run out of life, a loading screen details your miraculous survival. Then you wake up elsewhere with time having passed. It’s a little weird, but at least it has an in-game reason beyond “you revived because this is a video game.” The game constantly saves your progress, too, so your mistakes stay with you. You can’t load them away.

Outward begins with a shipwreck that forces you and another one of the ship’s passengers into the wilderness. This functions as a bit of a skill check to ensure you know how to proceed in the game. There’s also a more literal tutorial that teaches you most of what you need to know. This is a very good-looking game, with beautiful vistas and long draw-distances, even if the characters mostly stand around and their models are sub-par. The game’s systems are complex and take some time to truly get down, but the tutorial does a good job of getting you up to snuff. Once you get through this initial segment, your character wakes up in their hometown. 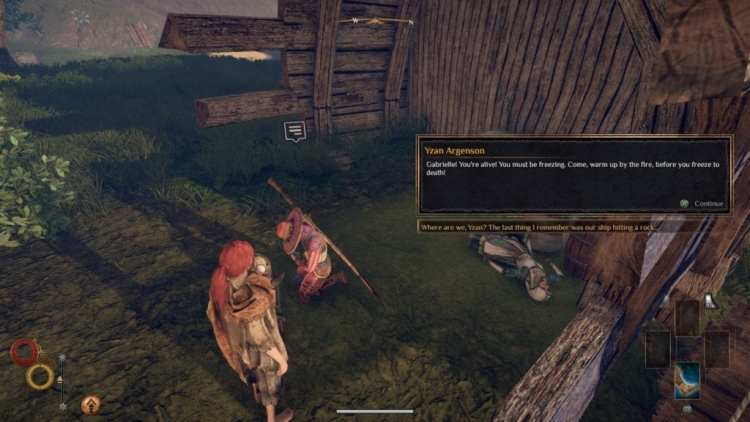 Upon waking, your character is informed that you’ve missed out on paying a sort of tax due to how long you’ve been out. If you don’t come up with a certain amount of silver by the end of the week, your house is going to get taken away. There is a woman nearby who offers some silver if you can get an item for her, but you’ll need to obtain the majority of it by collecting and selling loot. In most RPGs, money is extremely important. But in Outward, it’s not just important – it’s the basis for all of your character’s skills and attributes.

So, no, there’s no leveling up in the game. Instead, you’re meant to scrimp and save until you have enough to go to a trainer and buy boons that do a variety of things. In your starting village, the trainer’s boon increases your health, magic, and stamina pools. You can also purchase skills and other passives that give you certain benefits. There are only three boons you can have, however. You start the game with three skill points that will allow you to purchase them, and once you have three boons, you don’t get any more. This isn’t really a problem, though, as there aren’t many different boons in the first place.

What is a problem is how you have to purchase skills with money before knowing how useful they are. Earlier in the game, I figured using a shield would be a good way to go. So I purchased a couple of shield skills. Only, the shield bash skill I bought was useless. It almost never worked as intended, and I was just stuck with it. In fact, shields in general aren’t nearly as good as dodging. I would stand and block until an enemy finished their combo, at which point I’d attack. But the window between when their attack ends and when they can start again is so short that blocking almost always ended with me taking a lot of damage. 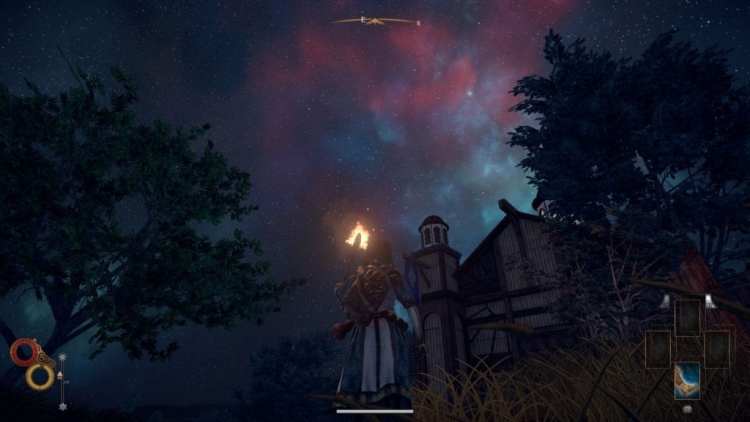 This is indicative of one of Outward‘s biggest problems. For a large portion of the game, I simply didn’t know how to handle its combat. You flirt with it briefly in the tutorial, but I was in no way prepared for it. The aforementioned first quest the woman in your village provides you with requires that you enter a cave and grab an item. Said cave is loaded with enemies that Outward expects you to fight simultaneously, but combat is just clunky and weird. Regardless of whether you’re fighting a human or some sort of monster, hitting an enemy multiple times won’t stagger them at all. It’s very strange to hit a man in the face with a sword only for him to continue his attack animation.

Instead, Outward has endurance meters that you have to whittle down in order to stun enemies. It’s fine in theory, but it just doesn’t feel very good. You need to have backpacks on you in order to carry your loot and necessities, but they eliminate the invulnerability frames of your dodge. The dodge without backpack is mostly fine, but I didn’t want to put my bag down and risk losing it. The game never explained that I couldn’t really lose my bag, and at the time I didn’t want to chance it. If you die with your bag on, you’ll typically wake up with it near you. If you die with it off, it’ll either teleport to you or stay where you left it. But I didn’t know this until later.

There are actually very few legit penalties for getting incapacitated, which I found surprising. You’ll wake up afterwards with most of your health locked off until you sleep. Sleeping, of course, makes you very hungry and thirsty. The big effect of those is that they neuter your health and stamina gauges, which will make it basically impossible to fight the game’s enemies. Since I disliked the combat so much, I spent most of my playtime running from everything, which – shockingly – worked, most of the time. But even after 30 hours, I still didn’t like fighting and only did it when I had to. 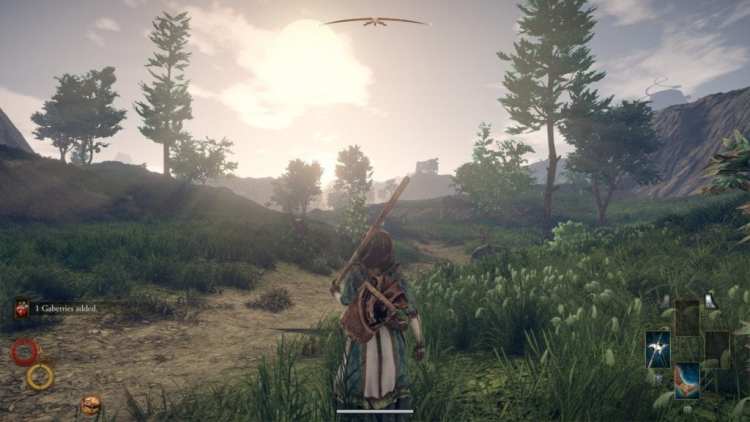 However, as my opening paragraph displayed, sometimes you have to. Beating down tough enemies and coming out victorious is generally a giant, tedious pain. I had a tent on me for sleeping, but sleeping outside of designated areas incurs the possibility of an ambush. This means you need to defend yourself, which can double the time you spend and make you even hungrier and thirstier. It was normal to have to stop retrying a tough fight so that I could go and procure more food and drink in order for my health and stamina to not suffer the consequences. I dreaded doing this every time, though, as it really puts a damper on your adventure.

Big For The Sake Of Big

To be clear, Outward enthralled me during my first 20 hours. Sure, literally every enemy I saw beat me into the dirt, and it took quite a lot of time and effort to reach a level where I could comfortably fight a single bandit. But I loved exploring the game’s large world and figuring out its mechanics. However, once I did, the game lost a lot of its charm. The game divides its world into four zones, and each time you travel from one to another you need a few travel rations. The zones also have surprisingly little to do. Most caves and places you’ll find consist of just one room, and they only offer meager rewards. Plus, there are very few quests.

To add insult to injury, you have to walk everywhere, and all Outward gives you is a map you can open and a compass. There are no quest markers, so you have to find your own way to everything. I actually liked this exploration aspect, and it becomes second nature after a while. Once you’ve figured out the lay of the land, though, walking back and forth through these areas becomes insanely dull and time-consuming. 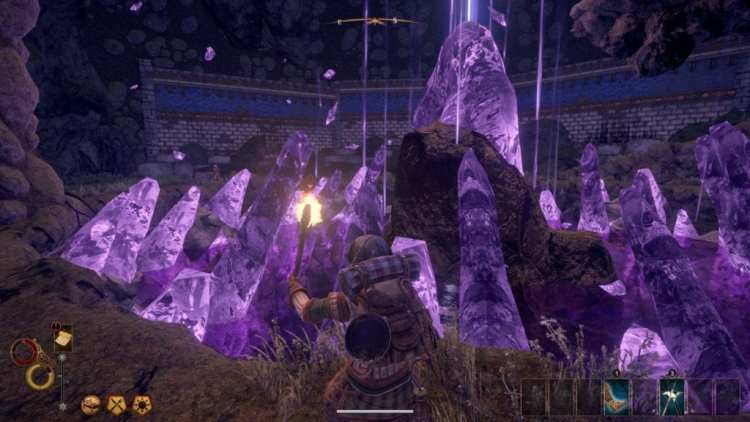 My root issue with this is that Outward is really, really cool on the surface, but the combat is bad and you’re going to be spending practically all of your time walking from point A to point B. Walking makes up the bulk of the experience. There are three separate quest lines that you can do, although you can only do a single one per playthrough. I only did one, but it didn’t have much to it and seemed to mostly give you a guided tour of the areas. In other words, it makes you walk places.

Outward also has a magic system, but it barely explains itself and I wasn’t about to spend a ton of my money on magic that I didn’t know how to use when I didn’t know if it’d be useful. A lot of the design focus seems to want you to use your initial playthrough to learn how everything works, at which point you can actually be effective in subsequent runs. Only, I didn’t want to play subsequent runs because I’d had my fill of walking and running away from the poor combat. 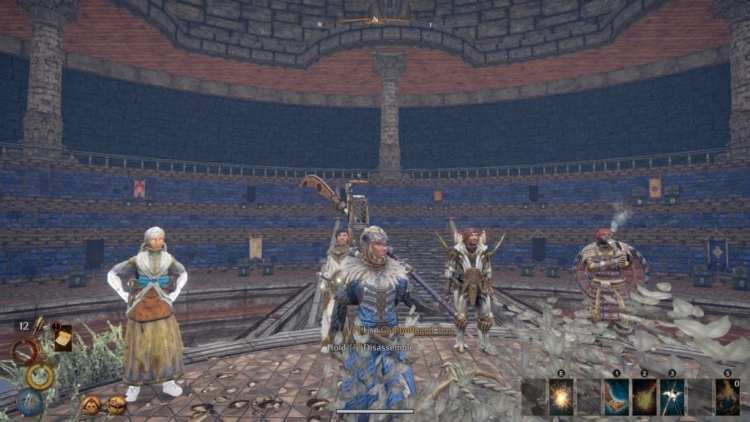 Finishing the quest line I picked took me a bit more than 30 hours. However, the idea of building up another extremely weak, vulnerable character from nothing and slowly selling loot for money in order to try out more possibly-useless skills was not a pleasant prospect. There are certainly a lot of great ideas in Outward, and there’s co-op that works really well. As such, I’m sure that plenty of people will enjoy walking this tedious world with friends.

As for me, I’ve had more than enough. There are a lot of cool things to see in this game, but everything in it is accompanied with tedium. So, I won’t be going back anytime soon.

Outward is simultaneously mesmerizing and full of missteps. What could have been a truly special game is damaged by how tedious and ill-advised so many of its design decisions are.

The Walking Dead: The Final Season Review – A Fitting End