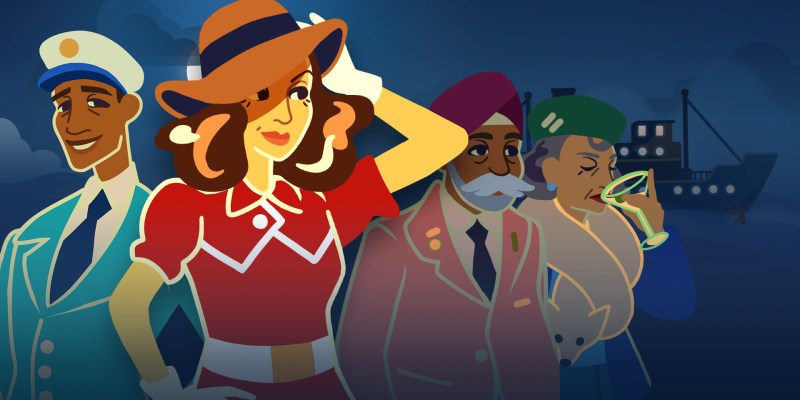 It’s 1935 and, on a crossing from England to America, I have just shoved my husband overboard. He’s gone. Dead. Kaput. Unfortunately, I now only have eight hours to cover my tracks before we dock in America.

Overboard has proven one thing to me that I’ve always suspected: I’m a bloody virtuoso at murder. With the emphasis, I suspect, on bloody. (Also, if law enforcement is reading this, I’m joking and please don’t check my basement.)

That first paragraph wasn’t actually me confessing to crimes that I somehow committed decades before I was born (addressing that to law enforcement, again). But it is the premise of Overboard. As the newly widowed Veronica Villensey, you’ve got eight hours to quite literally get away with murder as the other first-class passengers go about their day.

Your chances of succeeding on your first attempt are very, very slim, because you don’t actually start with a lot of information. While Veronica has been on the ship for a while and knows the other major players, you don’t. Normally this disconnect would feel a little jarring, but Overboard is a game designed for very short play sessions (anywhere between 10 to 30 minutes) with lots and lots of replayability. You’ll quickly get to know the others: the subedar-major who will try to put the pieces together, the weeping ingénue, the British fop, the nosy old lady, and the dashing commander.

What will take a lot longer, however, is figuring out how you can use them to your advantage. Veronica’s not above using any means to cover her tracks. Bribery, blackmail, seduction, and planting evidence are just a few possibilities. Plus, everyone has secrets of their own that you can exploit. And if all else fails, you can always just commit another murder. I mean, why stop at one? They’re basically like Pringles.

Happily, you don’t need to spend every attempt trying to get away with murder, and indeed you shouldn’t. Every time you see something interesting that might help out, it’s added to a little checklist in the corner of the screen that remains across playthroughs. What’s this person’s secret? What does that key do? How can I get into this room? You can easily spend an entire playthrough just trying to fulfill one of these little checklist mini goals, which will usually give you an idea of how to accomplish your goals in your next run. 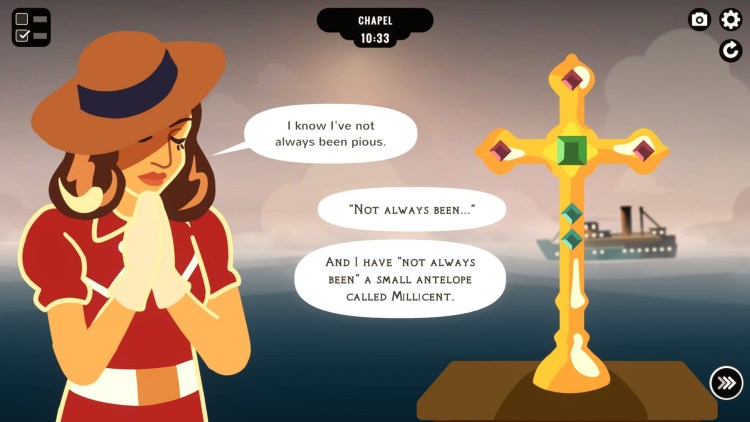 You can pray to get advice on some trickier bits, but it’s mostly worth it for the dialogue.

Failure is also routinely entertaining. On one “attempt” — and I put that in inverted commas for good reason — I decided I was fed up with one person ruining my plot, as they had done for the past two playthroughs. So I shoved them overboard. In full view of two other people. And then, when cornered, I jumped overboard myself. The writing is cheery, witty, and darkly humorous. It’s well worth exploring even these obvious fail states just for giggles.

That said, your ultimate goal isn’t just to get away with murder — it’s to frame someone else. Life insurance won’t pay out on suicides, so if you want to both avoid prison time and get the cash, you’ll need someone to take the fall. That’s where the real challenge lies, and that’s where you’ll need to start using all the knowledge you’ve acquired to time everything just right and get your plans sorted. There’s something very The Sexy Brutale about using multiple plays to analyze schedules and important items and moments, only to pull them all together to bring your dastardly plan to fruition, and I don’t invoke that superb game lightly.

Tonally and aesthetically, Overboard runs full steam ahead. The sparse bits of voice acting fit in perfectly (the odd “Bollocks” when you cock things up, for instance), the period music evokes and buoys up the setting beautifully, and the art is delightful — but this is an Inkle game, so you should know that already. And as mentioned above, the writing is also top-notch. Despite being such a short game, the characters rise above their stereotypical roles. There’s a lovely dose of snark in the text that gives it a kick and keeps it both interesting and amusing. Despite being a game where you basically choose from a list of options at any given moment, Overboard masks this tremendously well and makes you feel like you have real agency. 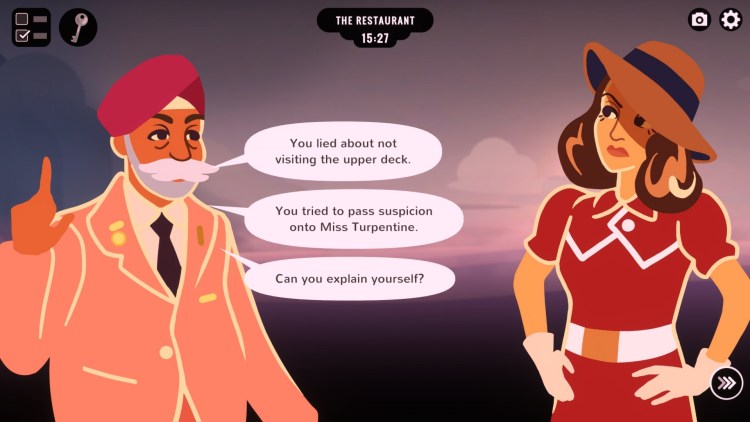 Why yes, you do have the opportunity to have a full Agatha Christie-style breakdown and confess in a big rant.

However… well, if there’s one problem, it’s with the denouement. After time passes (or when you ring the ship’s bell), all first-class passengers gather in the restaurant and everyone shares notes on what happened. But considering all the numerous things you can do, the actual conclusion that the subedar-major reaches sometimes feels a little off. I won’t go into details for the sake of not spoiling the specifics, but after making sure I had people to vouch for me and also planting a lot of evidence, I was still hauled off to prison. I’m not sure why.

This would be a bigger problem in a larger game. But in something where I can repeat my steps in about five minutes flat, I’m not too fussed about occasionally shaky logic. It’s a touch disappointing, and reinforces the notion that the conclusions are a bit more forced than they may seem, but “a touch disappointing” is about the limit of it. 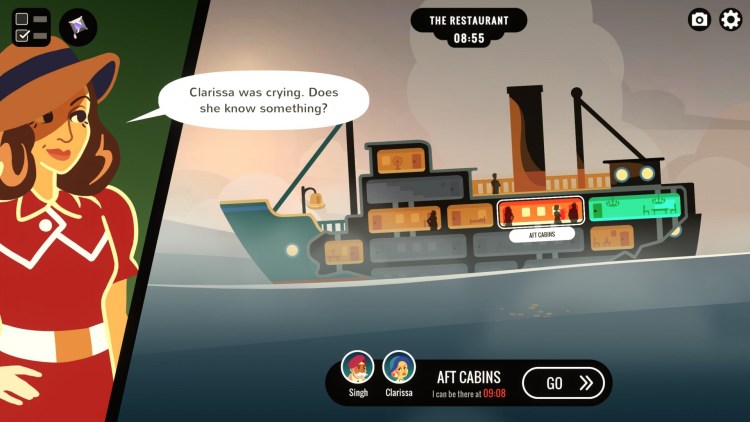 The ship’s map gives you a good idea of who you can find at each location at any given time, as well as Veronica’s thoughts on why you might want to go there.

That aside, the only other problem is that you may not be willing to drop $15 USD on something relatively bite-sized. But honestly, while Overboard comes in bite-sized playthroughs, there’s actually quite a lot to sink your teeth into in this youdunnit mystery. Truly, I’d say this is an experience to kill for. And if you don’t think so, then — oh hey! Dolphins! Just over the railing, there. Yes, just lean over. Just a bit more… and I’ll just stand here behind you…

Charming, witty, and very replayable: Overboard flips the whodunnit on its head and proves that it can, indeed, be good to be bad.

Prince of Persia: The Sands of Time Remake will not be at E3