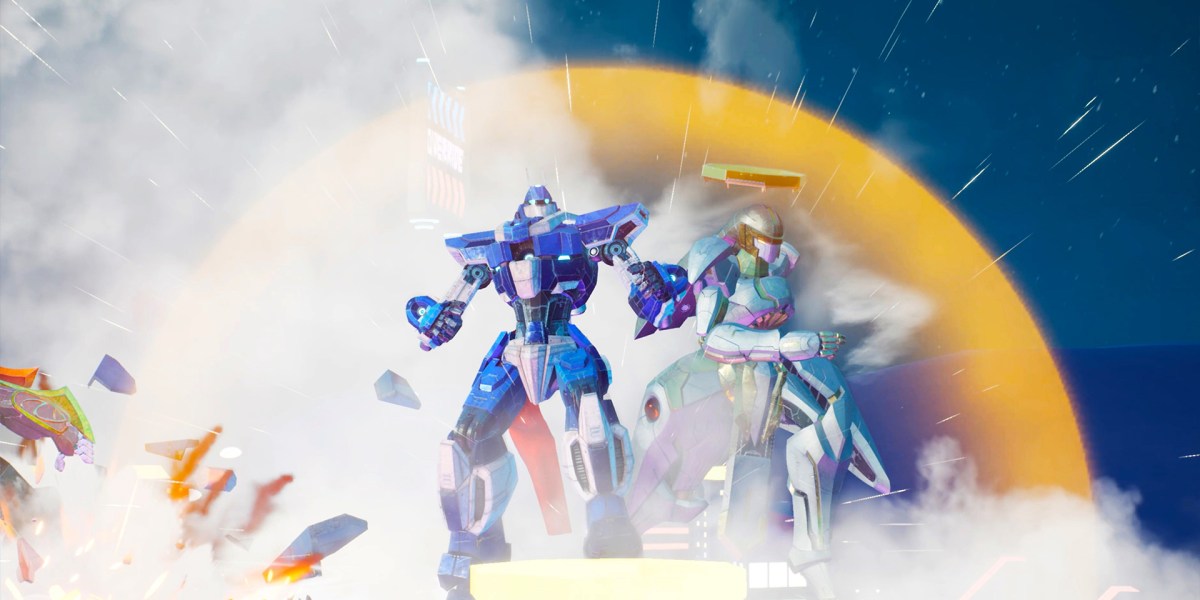 The possibilities are endless when it comes to mecha fighting games. The first Override has already been out for two whole years and it followed in the footsteps of such giants as Capcom’s excellent Tech Romancer. The game was solid but, unfortunately, barely anybody was ever playing it. This is why I was so surprised to see that Override 2: Super Mech League was set for release. The game is undoubtedly entertaining and carries a ton of potential, but a few missteps and one giant issue beyond its control represent a bit of an existential crisis for the series.

Unlike its predecessor, Override 2 doesn’t have anything in the way of single-player content. There’s no story mode and the mechs no longer have pilots. Instead, you have training, a couple of versus modes, and the League mode which acts as the main focus. The only narrative aspect comes in the form of your handler, Zoe, who gives you directions and helps you score sponsors while you work your way through the game’s various leagues. She has a character portrait and copious lines that are surprisingly fully voiced. She shows you the ropes and often chimes in after matches to talk to you about her feelings regarding the world while helping to put the game’s events into some kind of perspective.

The thing is, her inclusion is mostly pointless. She’s well-voiced, but her existence does absolutely nothing for the game, as it’s often tempting to skip through her dialogue as opposed to actually paying attention. She brings up various bits of lore but it’s all purely expositional, so I simply didn’t care about anything she had to say at any point. It was a strange thing for Override 2 to put that kind of effort into, especially considering that she’s the game’s lone feature outside of game modes. 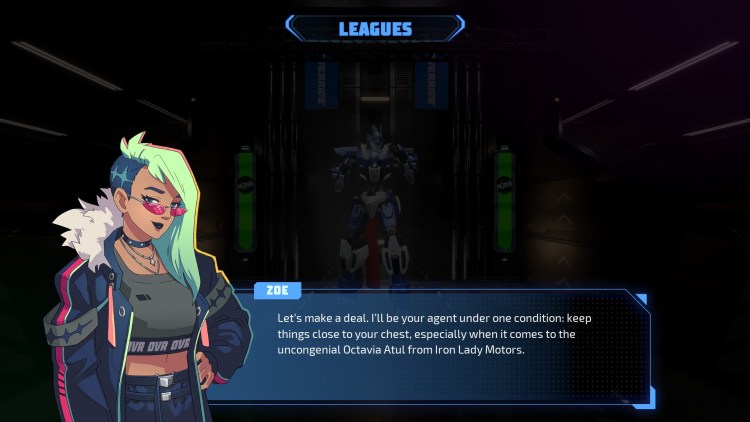 Combat has changed considerably in comparison to the previous entry. Override 2 does away with charged attacks and completely changes the way special attacks are handled, with a greater emphasis on wailing on your foes. The gameplay here is rather unique. Despite it feeling rather cumbersome at first, it’s quite enjoyable once everything becomes second nature. There are over a dozen mechs to choose from, and the basics are the same across all of them. They move around and have standard moves tied to the four shoulder buttons. Generally speaking, the left shoulder buttons are for light and heavy punches, while the right ones are for light and heavy kicks. Not all mechs operate in this manner, although most do. Some don’t have punches or kicks mapped to certain button presses at all.

Most mechs in Override 2 have combos that can be strung together with these four attacks. These vary from mech to mech and most have a minimum of a two-attack string up to a four-attack one. A mech may have more strings than others, as different mechs have different functions. Some rely more on their unique abilities while others can get by on brute force. There’s a good variety to the roster, so individual playstyles will vary wildly. The standard hits can feel a bit sluggish and stilted, but the rhythm makes more sense as familiarity increases. But strangely, combo strings aren’t particularly useful, as mechs can begin blocking most strings after the second hit. If you’re playing against someone who has even a slight familiarity with the game, no one will be using more than two-hit combos, as they’ll just get blocked and lead to fierce reprisal. All mechs can also grab, which is a function you’ll be spamming to punish people who attempt to block a third hit that never comes.

The special moves are where the mechs shine, regardless. There are specific types of specials at play. The most common moves are standard projectiles and charges, but there are also parries and more character-specific moves. Some characters can stun others, such as one mech that can straight-up freeze its opponents if the attack lands. Then there are the more specific, situational attacks. My favorite character so far is Contessa, who can dash away and leave an uppercut trap behind, which can be used to sucker punch foes. Notably, there are certain matchups that will put your mech of choice at a large disadvantage. 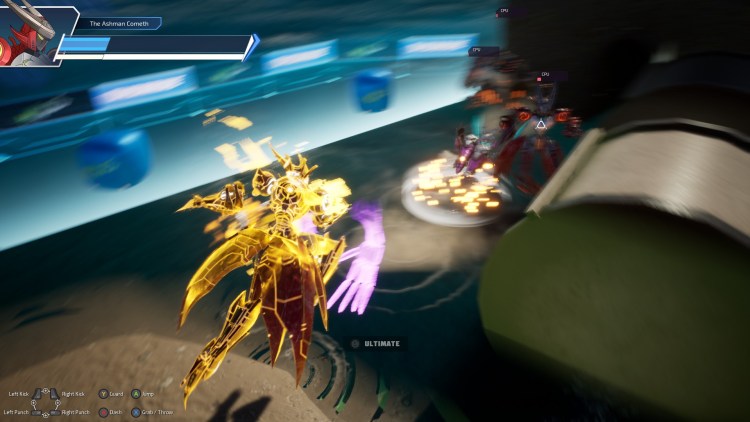 The art of balance

Suffice to say, Override 2 is meant to be more of a party game than a serious competitive fighter. The balance isn’t perfect and some mechs are simply much more useful than others. This goes double for the mechs with more unique abilities, as it’s currently easy to catch other players off-guard solely by utilizing moves that they won’t have working strategies for. The game uses rollback netcode, and I’ve found the performance to be above board. I did see some disconnects from other players during my time with the game, although I think they might have been people dropping out because they were losing. I occasionally saw moves fail to register or connect as well, such as a grab simply refusing to work even though I was definitely in range.

There are a variety of game types available in Override 2‘s league modes, almost all of which are multiplayer. There are typical 1 vs 1 matches, 2 vs 2, and brawls between four players. One mode tasks four players to stay within a zone, as being outside of it sees their health drop. The last one to survive wins. As you complete league matches, you’ll unlock more leagues with different match types, plus currency that you can use to purchase mechs and cosmetics. You start this mode with a few default mechs, but can purchase whichever ones you prefer to add to your roster. Upon doing that, the default mechs vanish. You earn plenty of currency simply by playing the game, so it doesn’t take a ton of play to get yourself a sizeable roster.

The thing is, I didn’t get to explore these game modes as much as I would have liked for the purposes of this review. On the day the game launched, there was a peak of around 50 players. Day two saw half that. There were so few people playing online that finding anything other than 1 vs 1 matches was impossible, and I had to try the others out with bots. Incredibly, there’s currently no cross-platform online play function, which is a veritable deathblow for a game like this, which currently has next to no player base. To make matters worse, you can currently only play with a single friend in 1 vs 1 matches and can’t matchmake in groups this way. These issues wouldn’t be so glaring if the game was doing well but it just isn’t, unfortunately. 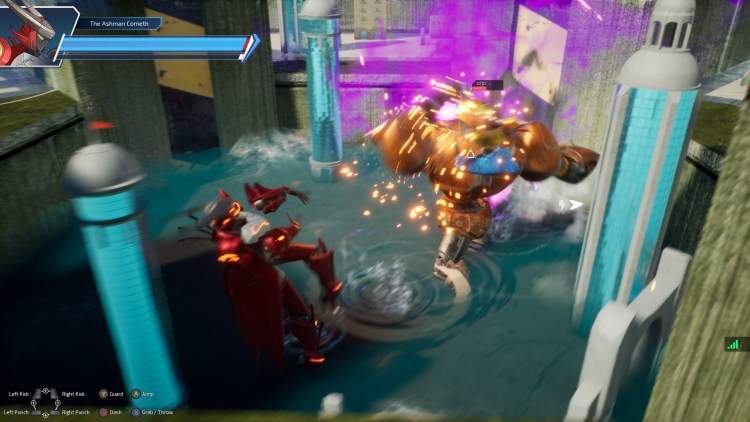 However, Override 2 is set to receive a patch that adds in both of these features, so hopefully, the player base issue will be somewhat rectified. I enjoy the game, even though the attacks seem a bit stiff and the lock-on could use some work. Furthermore, I would have liked to play it as it was meant to be experienced. As of now, it’s a hard game to recommend, as it’s very much based around online play, and you’re simply not going to be able to find other people to play against right now. If that changes, then it will easily provide hours of mecha fun. If not, it’ll die an unceremonious death exactly as the first game did. Here’s to hoping that doesn’t happen again.

Override 2 has a lot to offer prospective players. From its satisfying, enjoyable combat to its varied, colorful stages and mode options, the game has everything it needs. Except for people playing it.