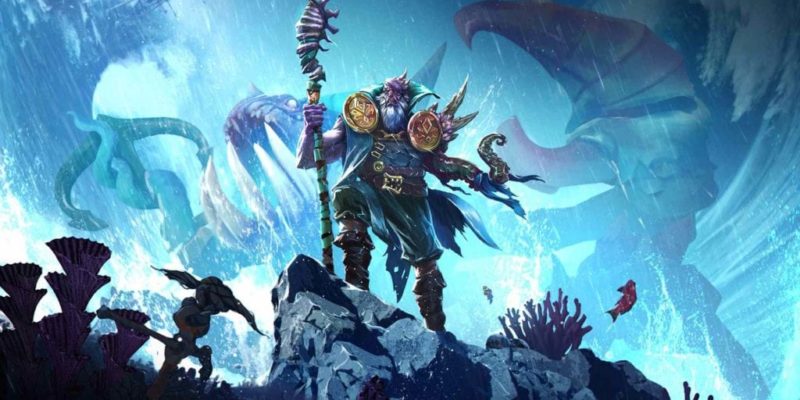 Pagan Online drew me in with its collection of distinct heroes and a campaign story that’s loosely based on Slavic mythology. The gods of this world have disappeared, and it’s up to the hero to rescue them before darkness envelopes everything. It sounded like an exciting, though relatively straightforward, task for this action role-playing (ARPG) fan. Except — I soon discovered that the game isn’t really what I thought it would be.

In actuality, Pagan Online is an action role-playing game in that it initially resembles titles such as Diablo. But in truth, it plays more like a kind of fast-paced bullet hell game that’s high on action and light on role-playing.

This would have been a minor point if the gameplay were impressive enough. But the game disappoints on several different levels and is undermined by some strangely complicated design decisions. 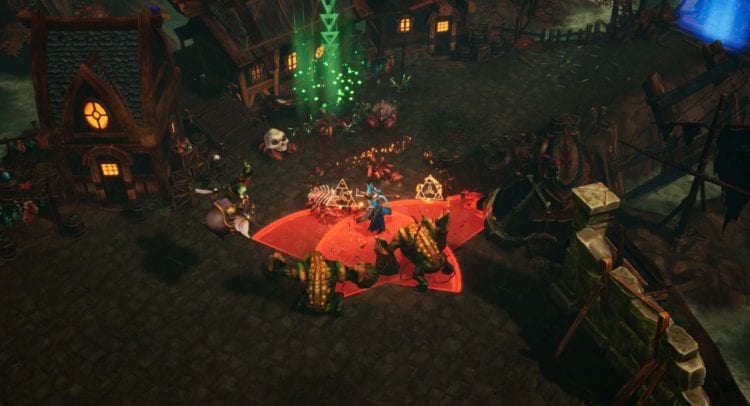 Pagan Online starts as a generally straightforward game. You choose from a roster of 10 characters, each with unique skills and abilities. Then you leap into a world that’s being overrun with monsters, equipped with three pre-set character abilities and four magical skills of your choosing. Instead of clicking to move, players use the WASD keys while attacking in the direction of the mouse pointer and pressing other keys to cast spells, making the game feel almost like a top-down shooter. This feeling was underscored by how I chose to play as Valeria, who uses two rapid-fire crossbows.

Along the way, you pick up loot and weapons, gain experience, upgrade your skills, and take on powerful boss creatures. Pretty par for the course, as far as ARPGs go.

Except that’s where the similarities to games such as Diablo end. Unlike many other role-playing games, exploration isn’t a priority in Pagan Online. The maps aren’t procedurally generated, and there’s a persistent arrow that guide players to their destination. 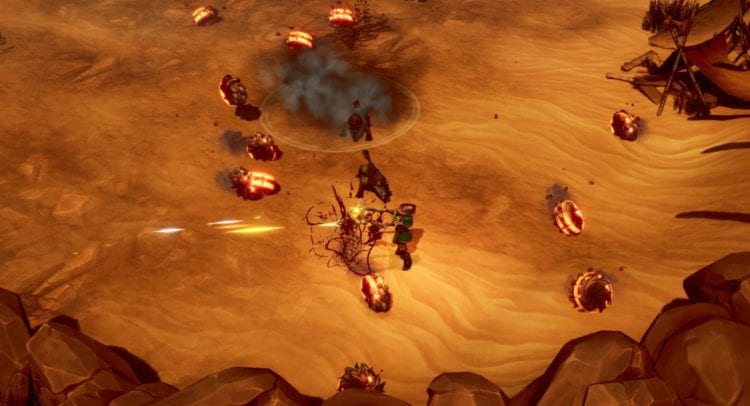 Valeria is a double-crossbow wielding gunslinger.

Force fields appear over exits once players reach pre-designated combat areas and waves of creatures will teleport in. So, Pagan Online is essentially about finding how well you can survive being repeatedly locked in a box full of monsters with a limit of nine health potions and hardly any recovery powers. It’s thrilling at first, but the formula soon grows tiresome, since the entire campaign is composed of leaping into 10-20-minute linear missions before hopping back out to the Pantheon, the game’s world hub.

This goes back to how there’s very little sense of exploration and discovery. Players don’t roam through areas where they are randomly attacked. Instead, they’re teleported into spaces with specific paths to follow. Force fields and other obstacles usually discourage backtracking, and players don’t stumble upon characters that lead them to spontaneous side missions.

Multiplayer is limited to two people doing side challenges. The campaign is single-player only, which makes me wonder why Pagan needs to be online all the time. You can compete on leader boards and the challenges refresh regularly, but that hardly requires a constant online connection. 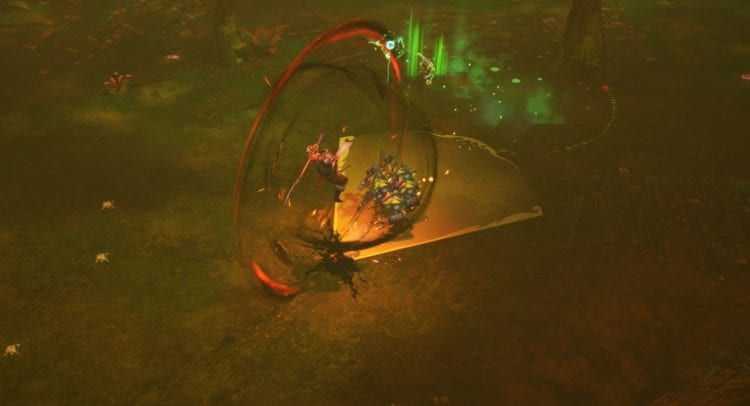 Pagan Online can feel like a non-stop battle arena.

Throw in features like the timed loot chest, which locks after a few minutes, and I couldn’t help feeling rushed through the experience. It’s almost as though the developers don’t want you to stop long enough to realize how repetitive the game is. What makes things worse is that the items found in these timed loot boxes aren’t worth the effort to beat the clock half the time.

There’s a long list of problems with Pagan Online’s loot system, starting with how terrible it is. I mean that in almost every sense. Loot only appears once a battle encounter has ended, so even if you manage to kill everything in an area except one monster, you won’t receive the drops. And you can’t continue a mission after dying; you can only replay it from the beginning.

When loot does appear, it’s shown as plain two-dimensional icons when on the ground, which (except for health potions) you have to click on individually to pick up, slowing you down as you try to reach the timed loot chest. I kept wondering why my pet couldn’t pick up the loot for me. It seems like a pretty straightforward feature. 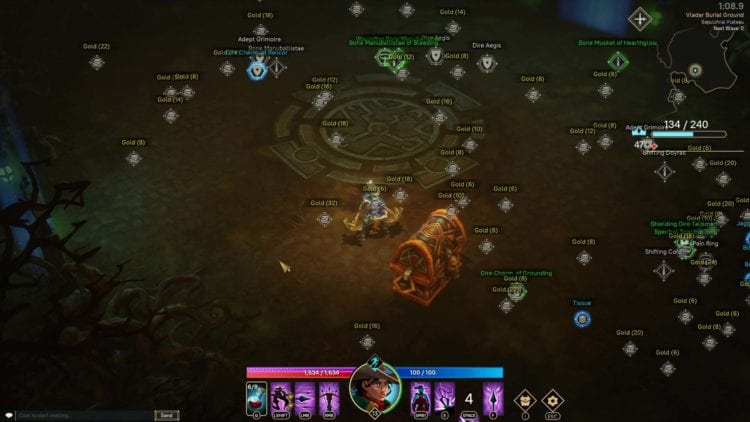 Loot everywhere, but you can’t always take it with you.

There’s also no way to return to the Pantheon during a mission to offload loot. Each mission ends with a one-way portal back to the hub. Entering it erases everything you didn’t pick up. Therefore, it’s usually best to enter missions with a completely empty inventory. Sometimes even that isn’t enough space to work with.

Not to mention, it’s entirely possible to lose everything through no fault of your own. If something happens mid-mission, like suddenly losing connection to the game, then you get nothing, not even new items you had in your inventory.

On top of that, the loot is kind of boring. Items appear as two-dimensional cards in your inventory with vague descriptors, but they’re mostly limited to rings and other trinkets that don’t show on your character. Your weapon is the only thing that visibly changes when you equip it. In the case of Anya, who carries a magical whip, there’s barely a noticeable difference. If you want to truly change the look of your character, then you have to acquire soul shards – a secondary type of in-game currency – to purchase skins.

Pagan Online is very much a “tell but don’t show” kind of game. I picked up numerous items that supposedly added elemental damage to my attacks, but I was never sure whether they actually did or not. Getting an item that provided extra points of lightning damage didn’t appear to add electrical effects to my weapons. At the same time, dealing cold or poison damage didn’t seem to have any new impacts on my enemies. As a result, weapons all appear to perform the same way with no real difference other than the numerical damage they dish out.

Lastly, loot drops aren’t always tuned well to the character being played. For instance, I went through an exhaustively long boss battle that earned me three items. One was Legendary, but none were for any of the characters I owned. I can’t think of a better way to completely drain the joy from a hard-fought victory.

The loot system, limited multiplayer, and the “locked in a monster box” gameplay all build up to one major problem: Campaign progression can come to a complete standstill.

I once reached a point where a pair of monsters tore through full shield and health bars in under three seconds. They were faster than me and stunned my character, so there was no way I could react to defeat them.

In a more open-world ARPG, I would have the freedom to avoid them or at least lure them away from the rest of the monsters to wear them down individually. But none of that is possible with the locked box format. The only options Pagan Online offers are to farm old campaign missions or grind through the side missions that include surviving enemy waves, clearing the combat points on a map, and trying to defend an object from being destroyed.

Putting the campaign on hold disengaged me from the plot while further emphasizing how formulaic the game is.

It’s all too bad because Pagan Online is a beautiful game that features challenging enemies and a distinct roster of heroes that play very differently from each other. However, unlocking those heroes is kind of a pain.

Additional characters are unlocked by collecting an unspecified number of soul shards, which are super rare loot drops that are specific to each hero. That is, they’re rare unless you unlock the right Assassination missions, where defeating a boss rewards you with a pile of soul shards. But before you can do that, you have to progress through the campaign and do challenges to collect five key fragments, which are also rare and limited to certain side challenges.

You’ll also need to dutifully keep items for other heroes in storage because the vendor doesn’t sell anything. Crafting is likewise a bit problematic because recipe drops are rare, even when you turn up the difficulty settings, and they can only be used once. 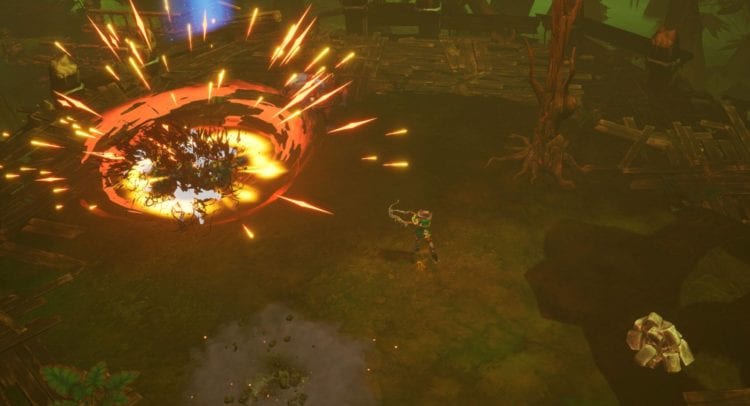 Play for a while, then put it down

Pagan Online could have been a deeply engaging game, but it’s hindered by one-note gameplay, an unsatisfying loot system, and limited multiplayer.

I’m the kind of player who needs story, exploration, and atmosphere to go along with the monster hordes. In other words, I wanted to get more RPG out of my ARPG. That might be expecting a lot from a $20 game, but I would be willing to pay a little more for a deeper experience.

Some might enjoy the challenging, fast-paced action Pagan Online offers, which can be fit into short play sessions – some around five minutes. The game still has the potential to become much better, especially if more multiplayer options are included. But as it is, I doubt I’ll be returning to the game anytime soon.

Pagan Online's fast-paced action is weighed down by its disappointing lack of depth. If you want the thrill of being trapped in a barrel full of monsters all day, this game is for you. If not, then it's best to look elsewhere.

By Kevin Carignan7 days ago
Reviews