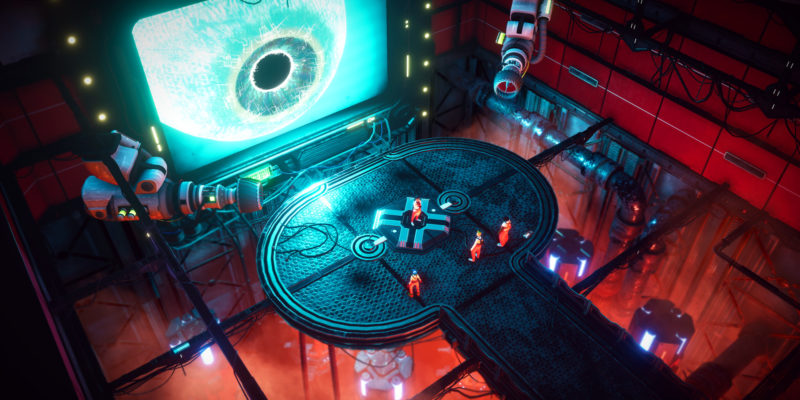 To understand exactly where and why Paranoia: Happiness Is Mandatory goes wrong, you need to know what Paranoia is. And that’s not me threatening you by saying I’m going to hide in your cupboard one night or something; I mean the base setting. You see, in theory, an isometric RPG based on a pen-and-paper role-playing game sounds like it’d be perfect. After all, that would just follow in the footsteps of Baldur’s Gate, Planescape: Torment, and practically every other D&D game that made a splash.

But Paranoia isn’t really like that. The tabletop game is a sort of unholy and hilarious crossbreed of Jackbox, Mafia, and 1984. You’re part of Alpha Complex, an enclosed society run by an insane computer, Friend Computer. Almost everything is treason, and treason is responded to with rapid execution.

Your missions are frequently self-contradictory or impossible, usually requiring treason to succeed. Also, mutants and secret societies are both treasonous, and each player is both a mutant and a member of a secret society. In a good game of Paranoia, at least one person dies before the end of the briefing (but don’t worry: you have clones as extra lives). It’s a satire of both extreme bureaucracy and Orwellian nightmares, and with the right group of players it’s as brilliant as it is silly.

So how the hell do you turn a P&P RPG of fast talking, backstabbing, and cunning plans into a CRPG? If Paranoia: Happiness Is Mandatory is any indication, the answer is “very badly.” It’s a bad RPG with poor combat and a crap use of the source material. It’s got a few nice ideas, but most everything is either boring or frustrating. Or occasionally both. 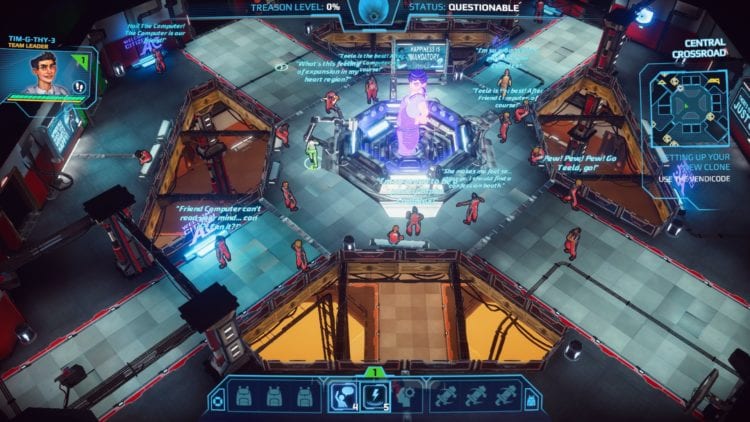 This is the lovely, busy hub area. You can interact with effectively nothing you can see on this screen.

There aren’t really any other side quests. There aren’t any non-plot-mandated people to talk to. Vending machines aside, there’s only one shop… which I never actually used. There are occasional terminals to interact with for some lore, but that’s pretty much it. This is pretty far from an in-depth, living world. 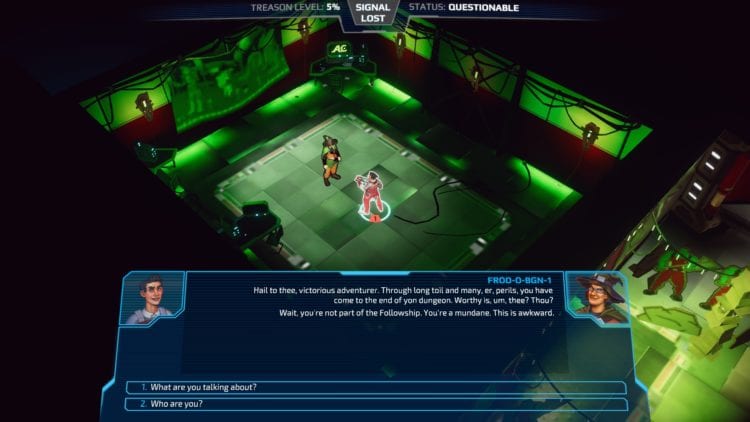 This is about as witty as the game gets. A LARPer with the name “Frod-O-BGN”.

As for leveling up or getting better gear? Don’t worry about it! Gear is supplied at the start of every mission and taken away at the end of every mission. You can stash a small amount of stuff away in your room, but that’s mostly useful for crafting components, healing items, or ammunition. You won’t really find better guns or armor than what you’re outright given.

Then there’s leveling up. I’m still not 100% sure how this works, which is a pretty bad sign. I believe you gain skill points for completed missions, which you can only assign when you die and respawn with a new clone. That, uh, removes any real tension of trying to keep your current clone alive or keep your Treason level low. So that’s another nice idea that doesn’t actually work.

The skill points don’t make much of a noticeable difference at all. While you can assign them to things like Bureaucracy and Procedure, checks for these are incredibly rare. 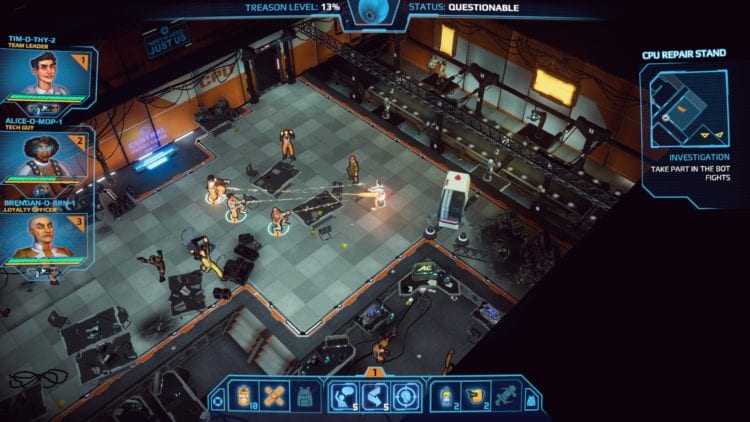 This is combat. You sit and wait until somebody dies.

Most Paranoia missions are either fetch quests or straight combat runs against traitors, robots, or mutants. Unfortunately, the combat is as piss-poor as the world building and character development.

It’s the same real-time-with-pause stuff you’ve seen in every Infinity Engine game (or Dragon Age), but without much in the way of tactics or strategy to back it up. Cover matters, certainly: You’ll want to position your square of troubleshooters (your team) behind a desk or crate. But that’s about it. Your items and powers are almost never essential, even when you only figure out how to level up halfway through the game like I did. 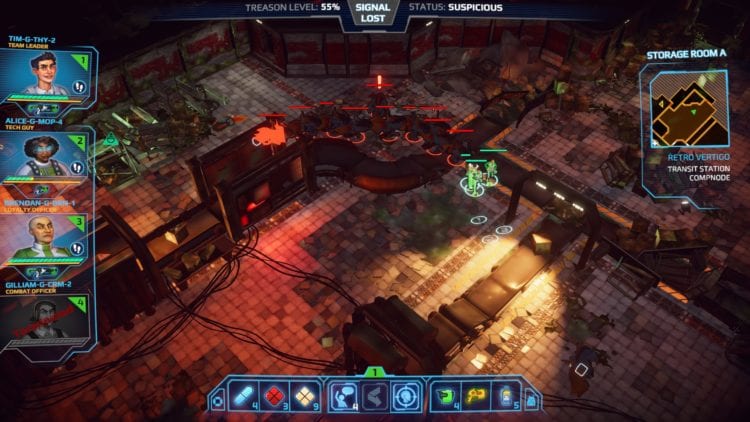 I accidentally aggroed a massive group of enemies, but it’s fine. I just ran in circles until they died to the damage tiles they were too silly to avoid.

Just plonk behind cover, unpause the game, and watch as you slowly exchange lasers with the enemies. You’ll probably win. Then you’ll move on. Only a very small number of fights require thought or movement.

Most of the time, if things get tricky, you can simply exploit the incredibly thick enemy AI. Duck out of the room and a foe with a rocket launcher won’t notice that there’s a wall between you and him. The only other sorts of fights are ones that are intensely frustrating, overwhelming you with enemies that can ignore cover (those with rockets and grenades), but strategy doesn’t matter much here either. Just luck and movement. 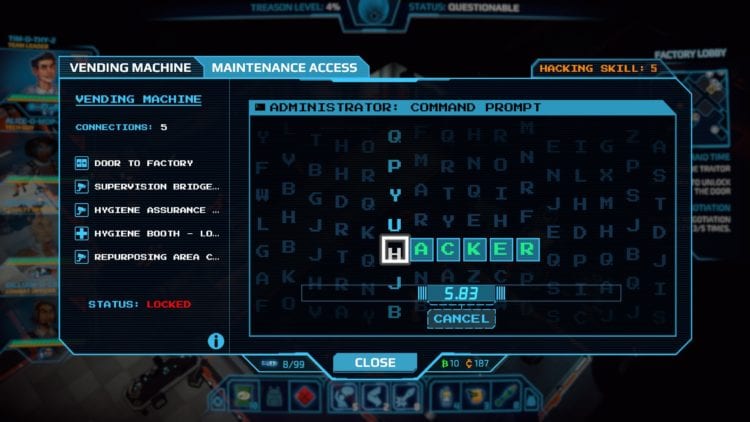 The hacking minigame is a crime against entertainment. And sanity.

Incredibly painful design decisions abound. Open doors are poorly marked on the minimap, and a few are hidden behind walls thanks to the isometric camera. Pathfinding is weak and your team will often get stuck on each other, especially if you try to get them to loot something. There’s a crafting system that you will never, ever use, except for hacking.

Paranoia has a hacking minigame — and it’s one of the worst hacking minigames I’ve ever seen. And let’s face it — there’s stiff competition in that category. It’s effectively Guitar Hero on an incredibly tight time limit, and you have to click the correct letters as they scroll down the screen into the box. Detection is iffy, and this uses limited resources. Screwing up hacking may require spending 5-10 minutes scouring the environment for more stuff you can break down into your hacking tools. And did I mention that the game only supports 720p or 1080p resolutions?

Additionally, all the Paranoia stuff, like your team betraying you or ratting you out to Friend Computer during debriefings, doesn’t matter much. There are some neat moments where particular party members will trigger events during missions – one switched sides in the middle of a battle; another accidentally gassed the entire team – but these are nuisances rather than anything deep. And regarding betrayals, even the Loyalty Officer was reticent to sell me out. It happened a couple of times but felt scripted, not least because I was wandering into restricted areas and hacking vending machines in every single mission. There was no real feeling of consequence or tension, but that might just be because almost every sodding mission only has one real route through it anyway.

Happiness Is Mandatory; disappointment is likely 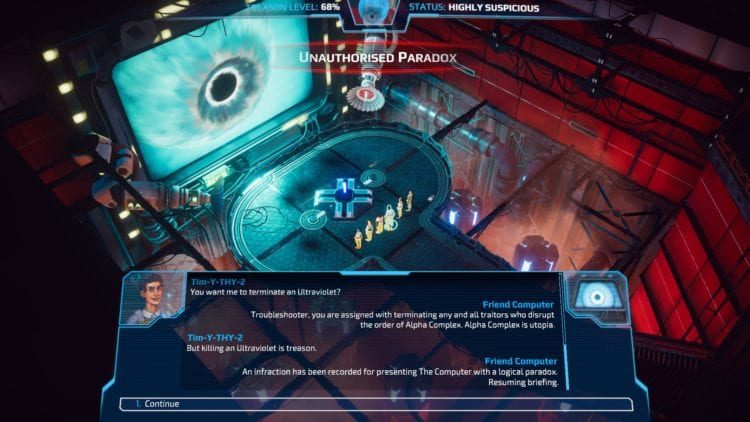 I’m pretty sure that writing this review is also treason, but that just means I’ll come back with better stats in a few minutes.

Paranoia is not good. It’s a bland CRPG that is either boring or frustrating. It makes weak use of the IP, and while it has some nice ideas, it fails horribly at capitalizing on any of them. The plot largely goes nowhere. There are no real stakes or tension. There are no interesting characters, Friend Computer aside. There’s no character development and no fun combat. And it’s also a CRPG that’s about seven hours long.

Paranoia feels like someone got hold of the license and then either couldn’t figure out what to do with it or had a lot of nice ideas that were then horribly constrained by budget and time. Were it budget-priced or still in Early Access, it might be forgivable. But as a full, major release? It’s too short, too annoying, and too uninteresting to recommend to anyone – even the most ardent of Paranoia fans.

Happiness is incredibly unlikely if you decide to pay money for this.

Destiny 2: Season of Dawn review – Another curse thanks to Osiris