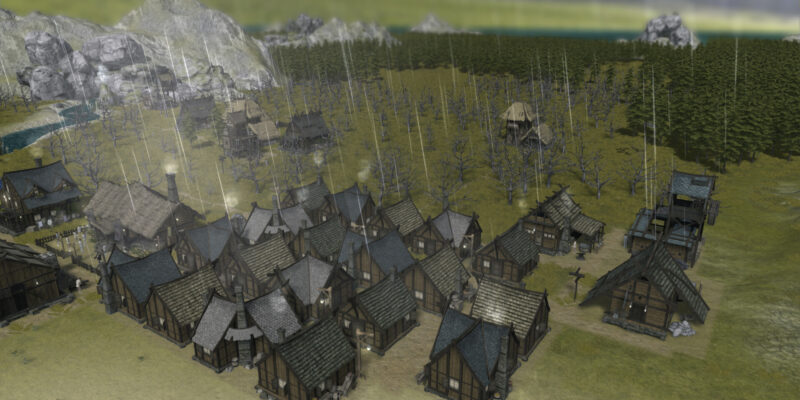 City builders have been a staple of the game industry ever since SimCity established itself over 30 years ago. Then, from the traditional tycoon design, emerged a different interpretation of the city builder. These newer games focused more on survival and early civilization as opposed to modern cityscapes. Recent years have seen this sub-genre expanded further with the likes of Banished, and now, Patron.

Patron is a survival city-builder game developed and published by indie studio Overseer Games. Other than Banished, it also takes inspiration from a variety of popular titles like Stronghold, Civilization, Colonization, and Anno. Its mix of strategy and city-building mechanics make Patron a good choice for players who like to take a step back and think things through.

Aim of the game

Experienced Banished players will spot many similarities between that and Patron soon after launching the game. Some players have even jumped the gun and accused Patron of being a mere clone. However, I believe that is an unfair stance as there are some subtle deviations that actually made a big difference. I’d even go as far as to say these deviations result in Patron appealing to an entirely different type of person.

The biggest difference by far is that Patron is tough as nails. As with most city builders, you are challenged with balancing the gathering of resources with your population’s happiness. The key to success is to judge when it is appropriate to use gathered resources to expand and when it’s necessary to stop expanding and instead prioritize your population’s survival. 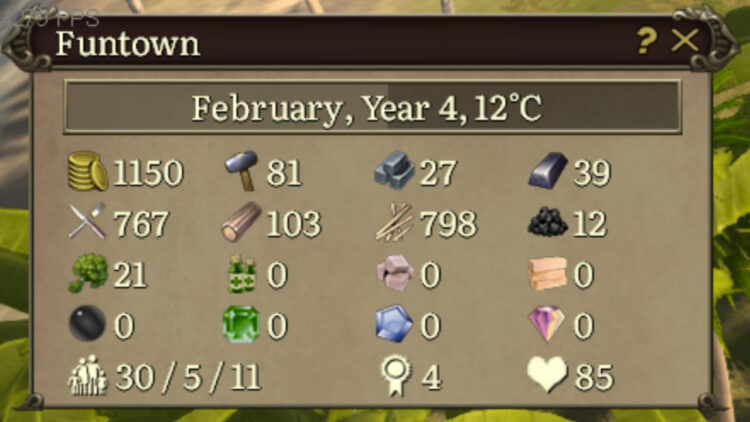 Having an excess of resources usually indicates a good opportunity to expand your town. However, expanding too fast can have unsavable consequences.

Of course, this exact same gameplay loop exists in Banished too but to a lesser degree. Messing up your resource management in Banished will slow down your progress. Doing the same thing in Patron, however, can end your save. Making a comeback after your population has left due to unhappiness is extremely difficult. It’s often better to just start over after learning from your mistakes.

Even on easy difficulty, it’s possible to ruin your town by starving out the population without the necessary infrastructure being built and sustained. More experienced players won’t struggle with this as much, but the initial learning curve is brutal. Certainly, once more guides come out it won’t be as unforgiving, but going in blind provides a real learning experience. It’s not a bad thing by any means, but it’s something you should keep aware.

This small town of mine

Currently, there is no set goal in Patron as the only available mode is sandbox. What determines progression is therefore widely subjective, but I personally break it down into three categories: population growth, skill tree progression, and town size.

Town size is more or less determined by the resource management that I’ve already mentioned. If you have excess resources, you expand and increase your town size. More population means more resources which means more land used to gather and farm those resources. 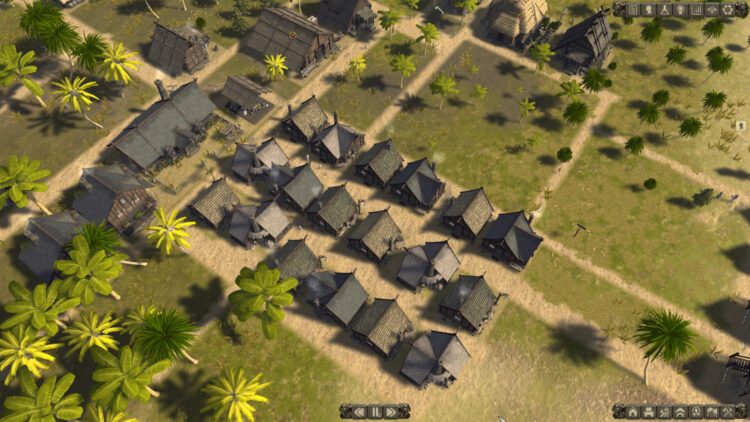 The building process itself isn’t as streamlined as I’d like, with certain building tools not being up to scratch. The lack of curved and diagonal roads coupled with no substantial terraforming tools can be particularly frustrating. Also, there is no camera tilt control, which is an unnecessary hindrance.

Population growth can occur by either having housed citizens birth children or receiving convicts and immigrants from various events. Events happen randomly, and they can be either beneficial or disadvantageous. I’ve had saves where events have bailed me out of a bad situation, but other times they’ve completely screwed me over. This isn’t as random or unfair as it may sound, though, as some well-thought-out preparation is usually enough to manage any outcome. 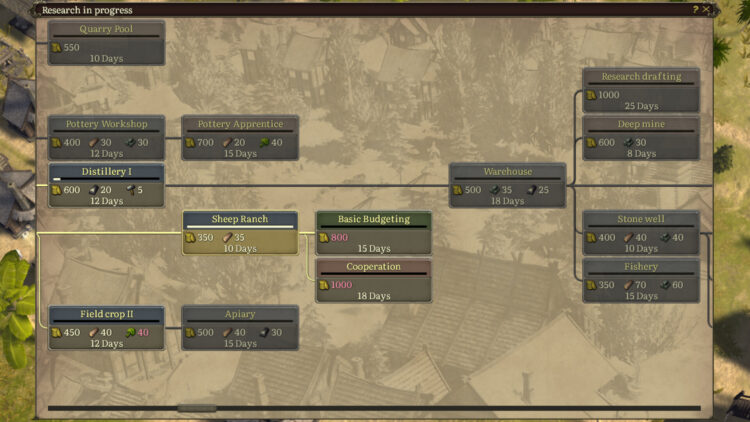 The skill tree in Patron is huge and can take tens of hours to finish. Given the game’s historic setting you’re hardly ever going to unlock the motor car, but technology does progress significantly as you work through it. Early unlocks include simple crafts like carpentry, while the end game will enable you to build complex structures like guild houses and mansions.

Additionally, if the idea of driving a Lamborghini around sounds funny to you, which it should, then good news! It’ll probably be possible soon enough. Developer Overseer Games has already promised that Patron will have both mod and Steam Workshop support. Once the community gets its hands on these tools I’m sure that all kinds of crazy mods will follow. This is a fantastic decision as mod support is one of the main reasons that genre leaders like Banished and Cities: Skylines have performed so well.

If there’s one department in which Patron completely beats Banished: its visuals. At max settings, the textures look phenomenal. It doesn’t matter how much you zoom in on a building or background, it will still look gorgeous. These environmental details are much appreciated as it makes immersing yourself so much easier. There are times where I found myself just pausing the game, heading into camera mode, and simply admiring the view.

Performance issues were nonexistent with Patron managing a stable 90 frames per second at max settings, 1440p on an RTX 2060. This is impressive, as I’ve seen far worse-looking games have many more performance issues. My brief testing with my gaming laptop running a mobile GTX 1060 suggests that Patron scales well with low-end to mid-range systems too. Be aware though that testing on my laptop was limited and results may vary on your machine. 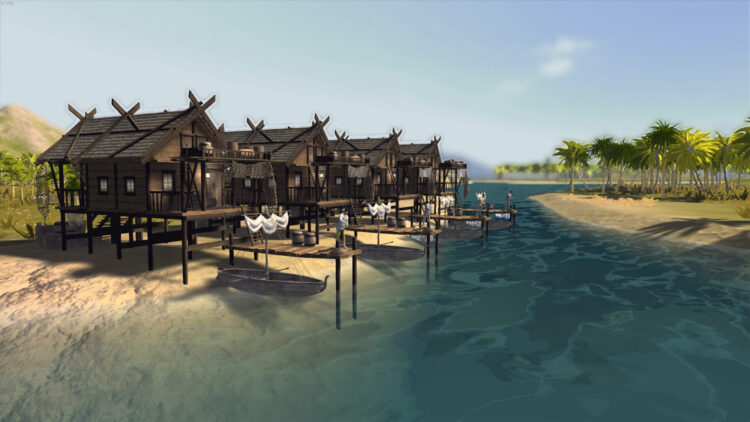 Unfortunately, there are some troublesome bugs that need addressing. For one, I found that opening the Steam overlay can cause the entire game to freeze. At times it took as long as 30 seconds to recover. Also, tabbing out or clicking off of Patron whilst it is initially loading or loading a save causes the application to white screen.

I never once managed to rescue the game when in this state, and found that force closing it was the only option. Since the task manager was stuck behind the crashed application, I was forced to create a new desktop. Although judging by how active they are on the Steam Discussions, the developers seem aware of Patron‘s shortcomings and are clearly passionate about the game. If history is anything to go by, games supported by developers like this tend to improve quickly. Therefore I have faith that many of these issues will be fixed in the future.

Patron is an excellent city builder that takes many of the best parts of Banished and adds a satisfying level of increased difficulty. The challenge of balancing resources with town growth is nothing new, but I haven’t seen that idea executed this well for some time.

At just $20 USD, Patron is a steal given the sheer amount of hours that can easily be sunk into it. The learning curve is rough at first but that makes the experience of building a successful town so much sweeter when you pull it off. The current bugs and lack of mod support aren’t ideal, but these look likely to be addressed in the future. And once these are introduced, Patron could very well become a staple for your Steam library. It’ll take time, but the potential this game holds is huge.

Patron is effectively a more difficult version of Banished. But there are enough subtle differences to differentiate them and the game's overall polish is fantastic. Some outlying issues need addressing but the developers have shown themselves to be passionate and willing to take feedback. It's already a very good city builder, but given time I think that Patron could become a staple of just about anybody's Steam library. For just $20, this is a steal.