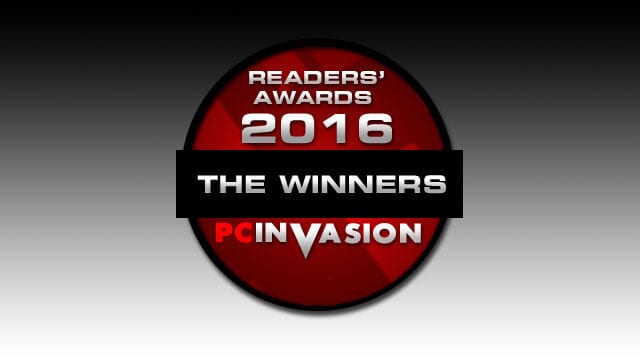 Democracy has worked its magic one again, and results of our annual PC Invasion Readers’ Awards are in. Thank you to everybody who voted, it makes this whole thing worthwhile.

The ‘Best Kickstarter/Crowdfunded Release’ category proved to be the most popular (in part, it seems, thanks to eager fans of Grim Dawn). In contrast, the ‘Special Award For Worst Windows 10/UWP PC Version’ received the fewest votes overall, perhaps reflecting the general lack of interest in Windows 10 Store releases.

Without further waffling, here are our 2016 winners. 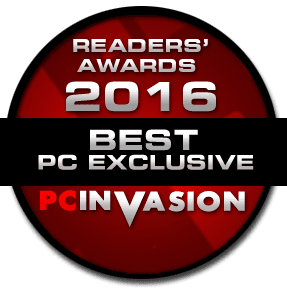 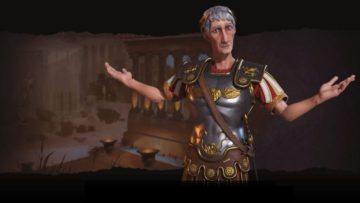 Civilization VI ended up with a healthy 30% of the vote, eventually pulling away from both Tyranny (22%) and Total War: Warhammer (21%) who gave it a decent challenge. Received opinion about recent Civilization titles is that
they fulfill their potential with a first expansion pack; but that seems not to be the case here, with enough support for the base game to crown it as Best PC Exclusive.

The field of PC Exclusives was a little reduced this year, thanks to a great many of the traditionally ‘PC’ games making the transition over to consoles. A case in point: we had Stardew Valley in this category until its last minute 2016 console announcement. With titles like Elite: Dangerous and Wasteland 2 now appearing on consoles (neither of them 2016 releases, but you see the point), even resolutely PC genres are making that cross-over. Whether we’ll see more of that in future, only time will tell. 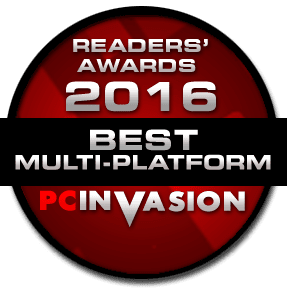 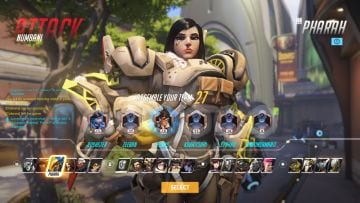 In an absolute squeaker, Overwatch (28%) edged out DOOM (27%) by just six votes. Early electoral analysis suggests that a distinct lack of viable candidates for waifu or husbando cost DOOM dearly in the latter stages. Not enough people want to marry a Cyberdemon, apparently.

Overwatch has been a huge success for Blizzard with more than 20 million gamers picking the game up since its launch earlier this year. 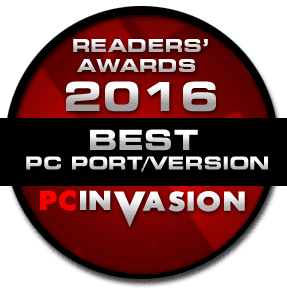 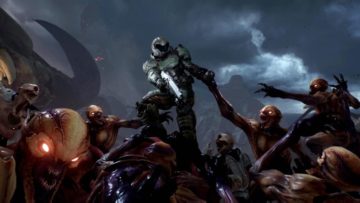 DOOM didn’t come away from the PC Invasion Readers’ Awards empty handed, however, taking a pretty comfortable victory in the Best Port category with 38% of the vote. Its nearest competitors were Battlefield 1 and Dragon’s Dogma, which received 19% apiece.

One of the surprises of the year (due to a dubious multiplayer beta, id Software’s less illustrious recent history, and iffy pre-release decisions), DOOM managed to restore faith in the single player FPS campaign and be a decent PC version at the same time. Seemingly well optimised for a variety of hardware configurations, it really showed its strength with post-launch support for the Vulkan API. 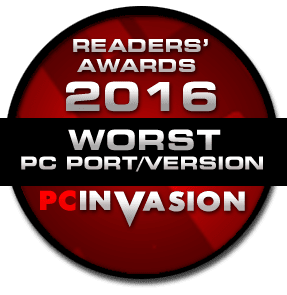 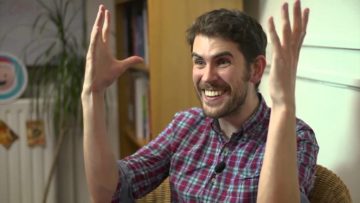 Both Mafia 3 (17%) and Dishonored 2 (13%) owe a debt of gratitude to the 2016 shit-storm that was No Man’s Sky. It was no contest in this category, with Hello Games’ release sweeping to victory with 58% of the total vote.

How much of that was purely on the strength of its (lousy) PC version, and how much was a “fuck No Man’s Sky” protest vote is unclear, but it’s hard to argue with 2016’s most disastrous project picking up this trophy. 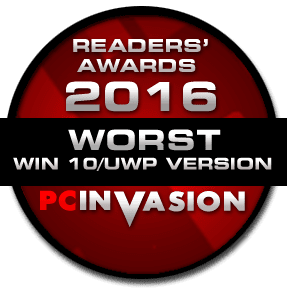 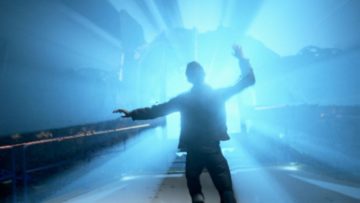 As mentioned, our least popular award in terms of voting participants. Still, of those who did vote in this category, close to half (43%) did so for Remedy’s Quantum Break. It was a launch plagued by both technical issues, and the restrictions of the Universal Windows Platform. Only with the release of a patch three months after launch could players switch off v-sync, for example. Remedy have a strong pedigree with PC releases (and proved they could still do it with Quantum Break’s decent DirectX 9/Steam version), so this failing was likely either down to UWP issues, a lack of time, or both.

A write-in vote posted in our comments rightly pointed out that the Windows 10 version of Call of Duty: Infinite Warfare should have made an appearance in this category. It split the online player base between those who owned the Windows 10 version, and those using the Steam release. Refunds were eventually offered to the poor souls who’d been trapped on Windows 10 with a pool of about 20 players. 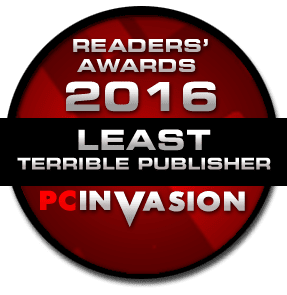 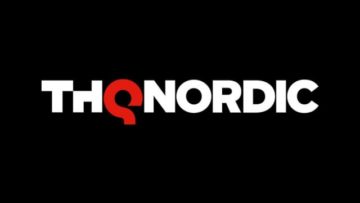 THQ franchise revivalists (so dedicated to bringing those properties back that they even changed their company name) THQ Nordic walked away with this one, gaining 34% of the vote. Devolver Digital (26%) and Paradox (25%) had a solid showing too, but not enough to dislodge Nordic.

They earned a lot of goodwill by giving away free copies of Darksiders: Warmastered Edition to anybody who owned the original title (and patched up problems with that version pretty swiftly), which may have tipped the vote in their favour. If it wasn’t that, it’s probably down to the strength of their catalogue. After a steady period of acquisitions, THQ Nordic can count Titan Quest, Red Faction, Darksiders, Panzer Elite, Desperados and Jagged Alliance amount their properties. Not a bad set of PC licenses to have in your back pocket, and a collection that bodes well for future releases from this publisher.

We had one write-in vote for Square Enix here (on the strength of their output: Hitman, Deus Ex etc). That’s a valid opinion, but the level of reported meddling that Square Enix engage in with their titles means we can’t really vouch for them as ‘Least Terrible’. Deus Ex: Mankind Divided in particular seems to have suffered through some incredibly damaging publisher influence. 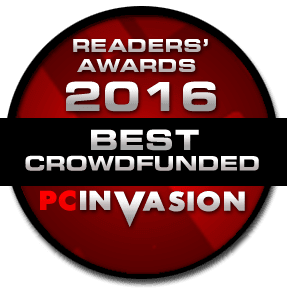 An instructive tale in re-tweeting our Reader Awards to your players. Grim Dawn did just that, and an engaged fanbase duly delivered a massive 81% of the vote share. Their nearest rival, Darkest Dungeon, wound up with just 7% of the total.

Crate Entertainment’s aRPG was Kickstarted all the way back in 2012, and subsequently went through a structured series of Alpha and Beta releases, followed by the staggered release of multiple game ‘Acts’. It was released as a finished title on 25 February 2016, and gets Steam user reviews ranging from Very to Overwhelmingly Positive from those who appreciate its appeal to the Titan Quest and Diablo 2 era of aRPGs. 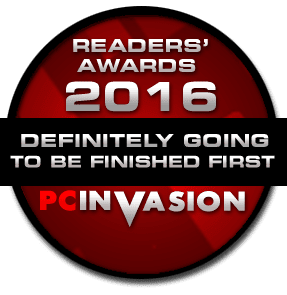 The Definitely Going To Be Finished First Award: The Sun explodes before any of these are done 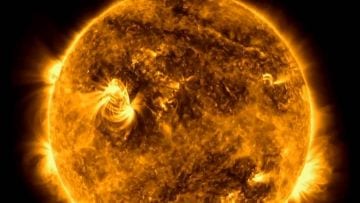 Not a very optimistic lot, are you? Presented with four titles that have a history of development purgatory (Half-Life 3, Star Citizen, Shenmue 3, Barkley 2), our readers opted for the total destruction of our Solar System as something more likely to occur before any of them see release.

43% went for ‘The Sun explodes before any of these are done’. Not even Shenmue 3’s last ditch effort to win votes by announcing pre-orders was enough to get it more than 11%. Bizarrely, Half-Life 3 (23%) was deemed the actual title most likely to appear first of the four. Come on now, really? 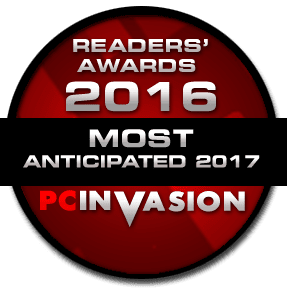 Most Anticipated for 2017: Mass Effect Andromeda 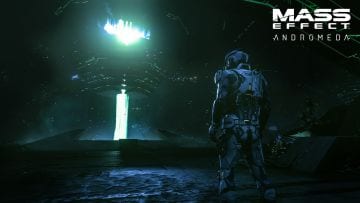 It’s very clear from the way the votes fell in the Most Anticipated category that you’re all keen on getting your hands on the next great RPG (assuming you feel Mass Effect still fits in that genre). Mass Effect Andromeda took the grand prize with a commanding 29% of the vote, and every game that came close was also an RPG of some form or another. Divinity: Original Sin 2 came in second place (16%), followed by Torment: Tides of Numenera (11%) and South Park: The Fractured But Whole (10%).

This category generated the highest number of write-in votes (via our comments section). Harebrained Schemes’ BattleTech got a nod, as did Mount & Blade 2: Bannerlord (which I really should have included to begin with, so that’s on me), and Yooka-Laylee.

Whatever games you’re looking forward to in 2017, if they’re on PC then there’s a fair chance that (time permitting) we’ll be covering them at PC Invasion. Thanks again to all who cast a vote. Get ready to do this all again next year with a whole new set of glorious games.