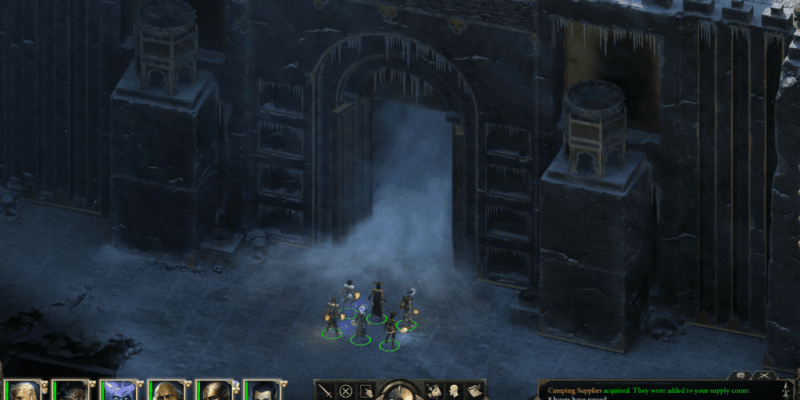 In-keeping with its mission to be like-those-Infinity-Engine-RPGs-you-remember-but-also-slightly-different, Obsidian’s Pillars of Eternity has now expanded. The White March (Part One) delivers your party an urgent letter from Caed Nua (assuming you’ve played far enough to acquire the stronghold), and encourages them to head into the Northern mountains in search of a way to open the legendary Durgan’s Battery.

If you were playing through the game from the start, The White March would open up after your investigations into the Woedican catacombs in Defiance Bay. Not far into Act Two.

The justification for dropping all of your activities in the Dyrwood and instead going on a hiking expedition is that a group from the Leaden Key (whom, sequentially, you’d have just learned more about) are also heading to Durgan’s Battery. For someone playing through the game the first time and hitting The White March at its designated story beat this should make just about enough sense to work as an incentive.

Not pictured: the burned out buildings and the overpowering smell of fish.

For many players, though, The White March will be attempted after already finishing the main Pillars of Eternity story. Since it’s a game with a definite ending, that means loading up a older save and doing a bit of retrospective ‘here’s something your party also got up to’ role-playing.

But even if you’re unable to suspend your insight into the bits of plot you already know about (like the Leaden Key, where for those who’ve finished the game there’s nothing especially revelatory), there’s plenty to challenge and surprise in this opening expansion chapter. Obsidian are aware that a sizeable proportion of players will be coming to this post-completion, so there’s an option to boost encounter difficulty for over-levelled parties (the rewards, however, remain the same).

I opted to do just that, so I wouldn’t sleep-walking through the fights (as was happening towards the end of the base game on Normal difficulty). And, you know, so I’d be reviewing it properly.

Even accounting for my time away from Pillars of Eternity, the battles in The White March were more taxing. That’s in part down to the general 2.0 release tweaking enemy AI (everybody got that patch, not just expansion owners), and in part thanks to new and angry beasties who roam the countryside outside Durgan’s walls.

Wake up Eder, people need your burly frame to hide behind.

White March foes seem particularly inclined towards paralysing or otherwise incapacitating your party members. More creatures in this expansion can really take a sustained pummeling, and quite a few have access to damaging spells. When combined with 2.0’s tendency to make them actually use those spells, it can get rather tricky. The AI is quite happy to try to disengage from combat with your beefier fighters and go after that scrawny mage at the back of your group as well.

Those are all pretty positive changes. I can’t really speak for the people who found the ‘Path of the Damned’ difficulty setting too straightforward (I’m not that kind of RPG stat savant), but Normal now proved to be more of a tactical challenge. Countering enemy debuffs, reacting to their positioning, protecting the back line, and making sure my party were properly equipped to their strengths (it was easy to get a bit lazy before) all came into play. Certain enemies in the higher-level Cragholdt area are even outright immune to particular damage types, preventing some of the more rote, spell-based strategies.

There are early signs of encounter placement improving too. Though it was just a lone moment within Durgan’s Battery, one battle saw my adventurers flanked by archers and blocked to the front by more shielded opponents. In Cragholdt, a few enemies patrolled areas, allowing me to plan an opportune moment to attack and catch isolated foes in a fight. These examples are rare, but make a welcome change from another ‘room of five or six enemies just stood around aimlessly’. The White March has quite enough of those.

It also has mine-cart rides.

A word about party AI too, as while it’s not specifically added by the expansion it has been released at the same time. So people may well experience it for the first time when returning for White March.

All party members now have optional AI, denoting how much you’re prepared to allow them to express themselves through violence. A wizard, for example, can be set to ‘Damage’ (using powerful spells), ‘Crowd Control’ (buffs/debuffs) or ‘Spellsword’ (power self up and charge into battle). The ‘range’ at which the AI will kick in can also be set, dictating the point at which the companion will stay put or charge headlong into combat. You can also decide whether they’ll use their per-rest abilities or not.

On Normal difficulty (again, what I have direct experience with), this works solidly enough. It’s best for characters whose tactics remain broadly the same, fight-to-fight. If you need to finesse something, pull off a specific set of spell-casts, or work around some AI blind-spots, then micro-management is obviously still required. As a baseline for being able to leave some of your party to their own devices for certain stretches of battle, it functions fine.

Here’s where you’ll be visiting (plus Cragholdt, if you fancy).

The White March’s opening chapter is hefty one, running to 15 hours or so in length (if you investigate pretty much everything, and happen to read at about the same speed as I do). There are wilderness maps to the north, east, and west of the main Stalwart village hub map, and those to the west and north have multi-layer dungeons in the form of some ogre caves and Durgan’s Battery itself. In addition, the optional, high-level (I did it at 12 on Normal, but it was rough going) area of Cragsholdt is a two map affair.

It’s tough to say how ‘naturally’ the expansion will fit into the storyline of a new game, or for someone coming to the title fresh, but Obsidian have done a good job integrating some White March-specific dialogue for the existing party members. NPCs (and new party members) present in the expansion are also able to comment on events outside of their own little area, so it doesn’t feel too ‘cut off’ or separate. I also noticed my Druid’s ‘Godlike’ appearance making more (slight) differences to conversations, which was a nice surprise.

New buddies Zahua and The Devil of Caroc have, respectively, a strong line in philosophically-inspired self-harm (for a greater, enlightened good) and revenge-driven murder-harm (for a similar goal; at least from her perspective). They too are integrated well, able to strike up party banter with various other members of your team. But while both are mechanically sound as a unique monk and rogue, they suffer a little from having their personal quests wrap up within the confines of the expansion. Unlike someone like Edér or Durance, The Devil’s character doesn’t get the luxury of an entire game over which to unfold. That ends up making her initial glib clowning seem a little at odds with the traumatic tale of vengeance, simply because Point A has to reach Point B so quickly.

Speaking of Edér, he gets some terrific new dialogue and remains a top candidate for most indispensable party member.

The Pillars of Eternity art team have done more smashing work on the environments in this expansion. Especially the ruined majesty of the Battery itself, which comes with some neat little coded ‘haunted house’ moments like slamming doors and eerie wails. The snow-blanketed surroundings are satisfying to trek through as well, all the while leaving little footprints and clouds of frozen breath in your party’s wake.

Some attention has also been paid to those who felt there weren’t quite enough memorable or unique pieces of equipment in the base game. The White March introduces a scattering of ‘soul-bound’ weapons which, as you might guess, need to be permanently bound to an individual. These weapons unlock additional bonuses through (usually) killing specific creatures, or specific attack types, which results in a bit of a problem for those (like myself) who’ve loaded up a pre-conclusion save. Then again, I don’t really need new weapons for my team, because I’ve already finished the game.

Despite the ‘Part One’ in its title, The White March’s opening half does come to a proper conclusion. The mystery of Durgan’s Battery is largely resolved, and you’ll get a little wrap-up narrative on how your choices and actions have had an impact on Stalwart village. It does, though, make it very clear that delving inside the long-dormant dwarf stronghold will bring other, unintended consequences.

Nothing ominous about any of this.

Looked at mechanically, in conjunction with Pillars of Eternity being updated to version 2.0, this expansion is a decent companion piece to highlight the changes and increased challenge of combat. Its center-piece is a three level dungeon crawl, and many of the additions (new, tougher foes and improved weaponry) focus on the tactical fighting side of the game. The narrative side slots neatly into the established themes of animancy and soul-theology, and the quest-lines hold their end up, but they’re generally there to funnel your party towards more dangerous spelunking rather than any story elements distinct to this expansion.

Reconciling how well mid-point expansions like this one ‘fit’ into the overall game is an awkward task. It’s a bit like suddenly gaining a few extra chapters for a favourite book; a welcome addition (if done well), but difficult to declare as absolutely necessary. The White March is up to the standard you’d expect, and largely familiar (broader combat changes aside) in its scope. Part two may or may not offer greater revelations. For now this expansion is straightforward to recommend, but harder to absolutely rave about.