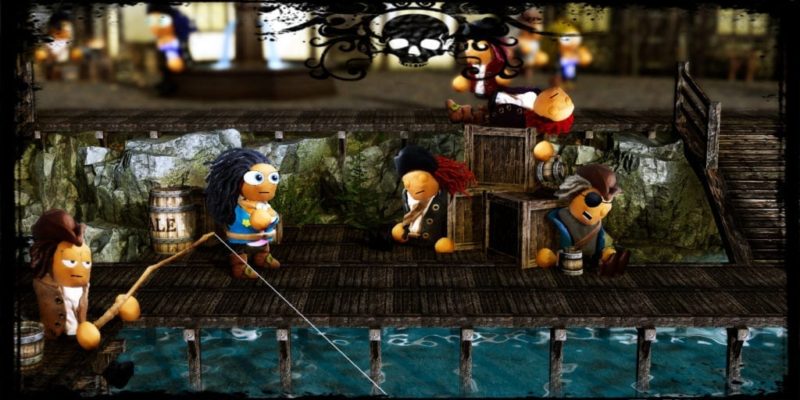 Some games can really surprise players, and the diamond-in-the-rough that is Pirates Of First Star is no exception. This indie puzzle-adventure game from developers Dynamic Voltage Games plays almost like a full roleplaying game, but with some twists. If you’re looking for a modern-yet-nostalgic adventure, this title isn’t to be missed. Combining both familiar elements from classic RPG and adventure games with some truly unique gameplay, Pirates Of First Star is a great idea with a great story. If that weren’t enough, however, the soundtrack is also a treat and the art design is as unique as they come.

The first thing you notice about Pirates Of The First Star is its exceptional – and quirky – art design. The colors and shades are dazzling right off the bat, with a grungy, yet comfortable, tone permeating the game’s setting. Its interiors are warmly-lit and its landscapes are enthralling. One rather interesting aspect of its visuals is the developers’ decision to merge 3D modeling with claymation. This gives the game a certain Wallace and Gromit feel but ensnared in Divinity: Original Sin environments. The end product is a unique and beautiful-looking game, and that’s not even diving into the story quite yet.

The game also runs very smoothly, with little to no lag in most areas and very brisk loading times in between game maps. Pirates’ animations are fluid as well, a stark contrast to some of the claymation visuals found within. Before your first battle or major plot point, you’re already hooked on the aesthetics alone. The game’s music is beautifully composed and appropriate for every atmosphere as well, with tense scoring to its battle sequences and homely harmonies to its cities and outdoor areas. All one needs now is some appealing gameplay and a good story. Fortunately, the title has both for days. 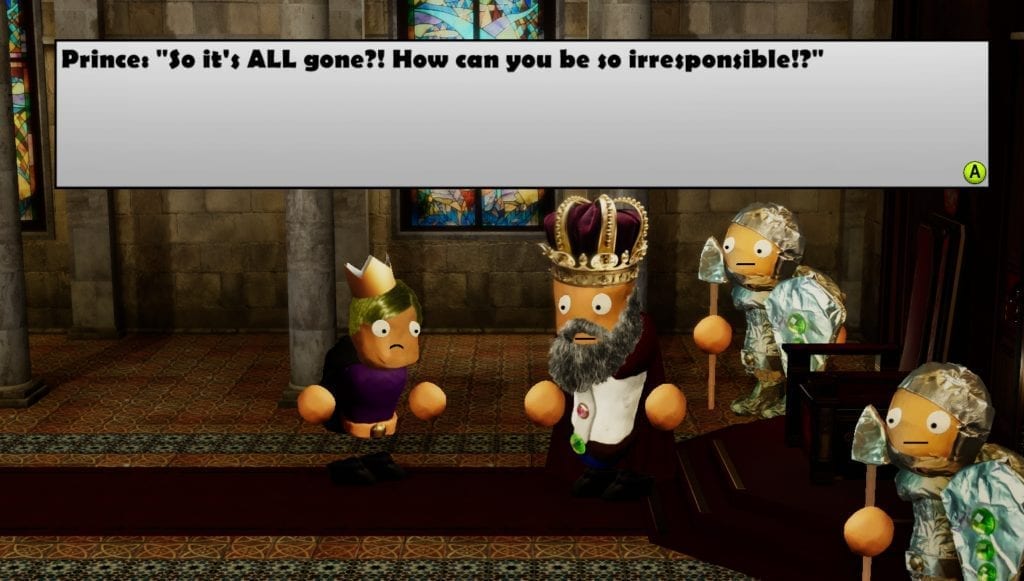 In both comedy and story, the dialogue in Pirates Of First Star comes through in spades

In the age of voice acting, it’s rare that a title with dialogue entirely composed in text makes players laugh out loud. This game is likely to challenge this trend. When indie titles forgo voice acting, be it for budgetary reasons or artistic choice, the writing needs to compensate. Pirates Of First Star tells the story of a king’s son, Zach, sent off to find treasure to save the kingdom’s monetary woes. The story is told with plenty of humorous quips from characters, and the cast is as personable as can be. The main aim in this game is to find the rumored “First Star” treasure, and the journey along the way is filled with surprises, heart and a ton of laughs. It isn’t all story, though, because you’ll be enjoying every aspect of its game mechanics from start to finish. 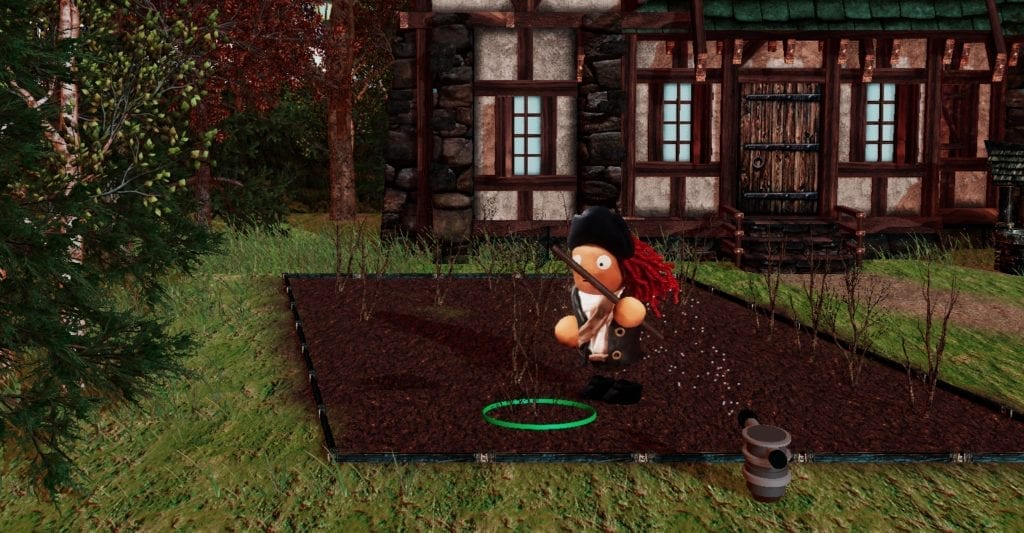 Harvest Moon, anyone? From growing berries to smashing your enemies with blocks, there’s plenty of variety in Pirates.

If the weight on Zach’s shoulders weren’t enough, he’s got a mom to care for too. Unable to pay her bills due to dementia, Zach’s mayoral half-brother forces him to garden as compensation. This is the first area where nostalgia kicks in, drawing inspiration from the classic Harvest Moon in gameplay. Zach must find seeds, plant and grow fruit and sell it. The rewards can be promising, however, as gardening in this game can yield some pretty lucrative produce. It’s also a great way to gain extra experience points and money for his other adventures. 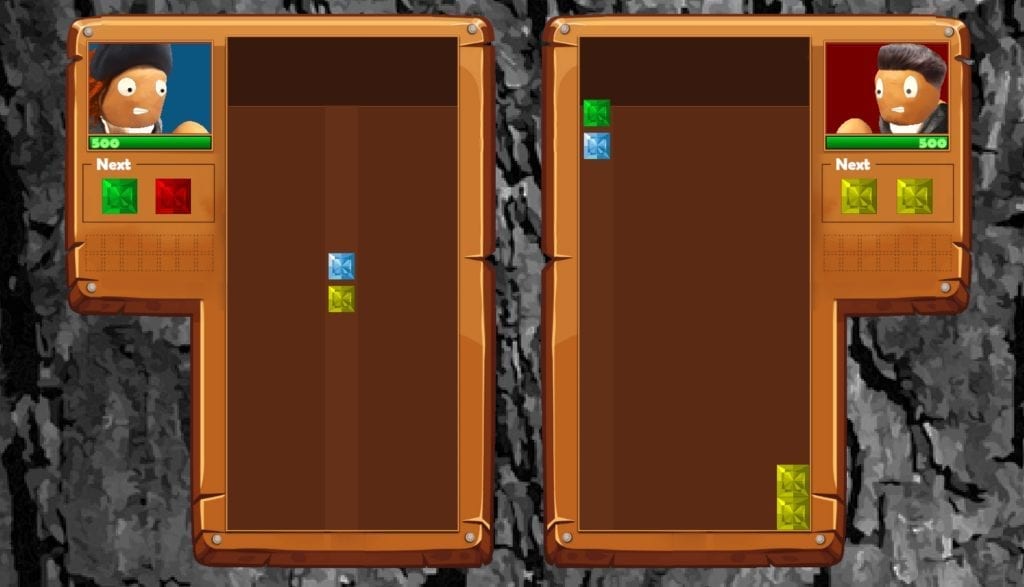 Pirates Of First Star combines classic Tetris-style battle with some tricks of its own.

Combat in Pirates Of First Star isn’t what you expect

Tetris has never been so fun. In many RPG and adventure games, battles usually take place in real-time or in your standard sequenced turn-based format. Pirates Of First Star switches this up in a big way, leaving the attack menus and spells at the wayside. Battling in this title involves what appears at first glance to be your standard, tile-matching game mechanics. However, there are other factors which make this classic genre really stand out in ways players haven’t seen before. Players face off against opponents, each having a health bar. As tiles match together and break, the opposing fighter loses health.

Fighters also gain rocks as they break tiles and can deploy them on the opponent’s game space, hindering potential tiles from matching up. Health increases as Zach levels up, and some enemies have considerably more health than others. This adds a new layer of challenge to combat, as players must not only excel at Tetris, but also must be of a sufficient level. Add the proper strategy of raining stones down on your opponent’s parade, and you’ve got a solid combat system that’s both challenging and very rewarding. 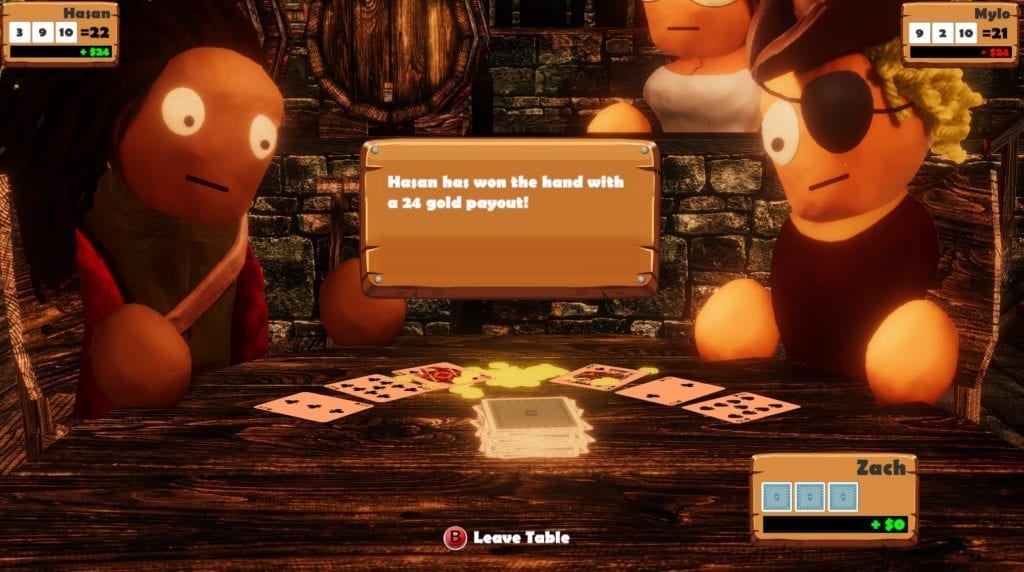 There’s much more to do than meets the eye in this indie gem, such as the unique card game Outright.

At its heart, Pirates Of First Star is a puzzle game. Exploration, solving challenges and even speaking to everyone Zach can all yield rewards. The lore to the game is rich and engrossing, making finding every last tidbit all the more exciting. Players can also engage in a completely unique card game, called Outright, for prizes. While the game is hardly fast-paced, there’s always something to do. Reminiscent of influential console titles such as Chrono Trigger and the beloved Super Mario RPG, the game feels like several different ones wrapped up in one. The developers are also planning four whole months of completely free content, as well. This content promises to add to and enhance the game’s lore and general world.

As far as indie games go, Pirates Of First Star should be on everyone’s to-play list. This is a game especially for gamers who grew up on Super Nintendo, but it also stands on its own all the same. With great dialogue, gorgeous artistic flair and plenty of engrossing gameplay, this puzzle game from Dynamic Voltage Games is a treat from start to finish.

The indie puzzle-adventure game from developers Dynamic Voltage Games plays almost like a full roleplaying game, but with some twists.
9

With great dialogue, gorgeous artistic flair and plenty of engrossing gameplay, this puzzle game from Dynamic Voltage Games is a treat from start to finish.

By Jason Rodriguez24 hours ago
Reviews