I have played Pix the Cat a lot. Not so much on PC, I admit, but on a certain handheld system that shall go unnamed here. As a score-chasing arcade game, it’s pretty much perfect for systems like that – but if you’re after something that you can play on PC in short bursts in between other, more weighty titles, it might just fit the bill.

Pix the Cat is the result of a truly bizarre one-night stand between Snake, Pac-Man: Championship Edition, and a puzzled-looking feline, and I genuinely apologise for that mental image. Your goal is to wander mazes picking up eggs and dropping them off on the target zones. Every egg you pick up causes a chick to follow you – creating your Snake-like tail – and you’re desperately trying to do all of this without either trapping yourself in a corner or against your “tail”, or slamming into one of the foes that occasionally wander the stages. 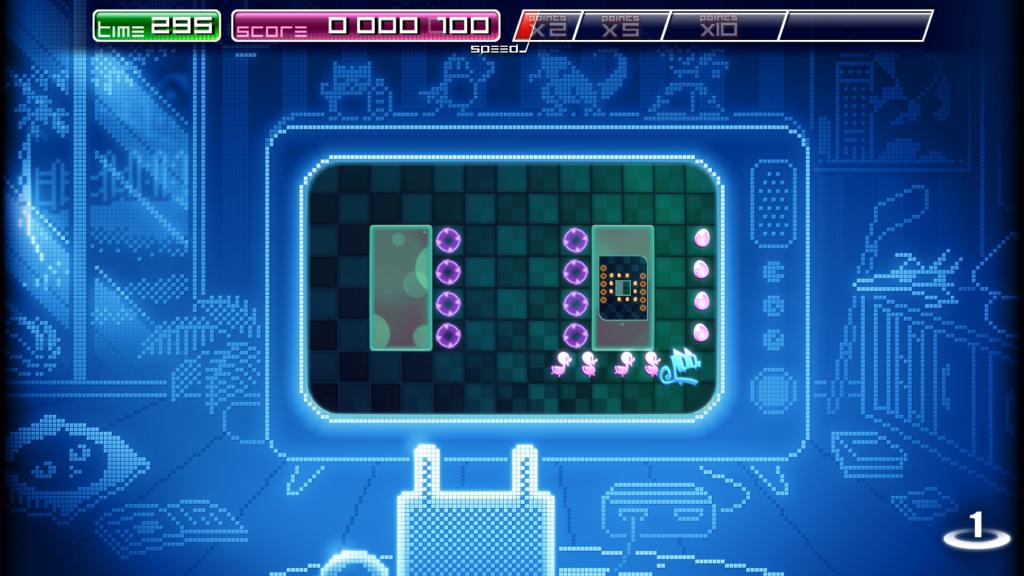 Things start off simply enough. Pick up the eggs, then drop the chicks off in the target zones, and then move into the portal to shrink yourself into the next stage – which you can see in the wall to the left of the eggs.

Complicating matters is that to “perfect” a stage, you have to have to grab all of the eggs before dropping anything off in a target zone, because otherwise you’ll break your combo and the game will slow down. That’s where the Pac-Man: Championship Edition comparisons start to come in: not only does the game speed up the better you do, but there is a “perfect” path through each stage. Identifying it before you trap yourself in a corner or screw up your combo is a rather important part of play, and you can’t just memorise it, because the positions of eggs and target positions are semi-randomised. And all of this is done to a clock, because really, this is about getting the highest score you can within the allotted time.

All of this is buoyed up by rather excellent aesthetics. The colour palette shifts constantly along with the game speed, and every stage is within the previous stage. You can see, within one of the blocks or walls of the current level, the next maze you’ll be wandering. When you collect all of the eggs, little portals open up that shrink you and take you there – but you can always wander back out again, and more than one stage will require you to do this to get a much-coveted perfect run. All while the music bops along, and the announcer chats away, and the colours shift, and the animations flow, and the backgrounds glow… 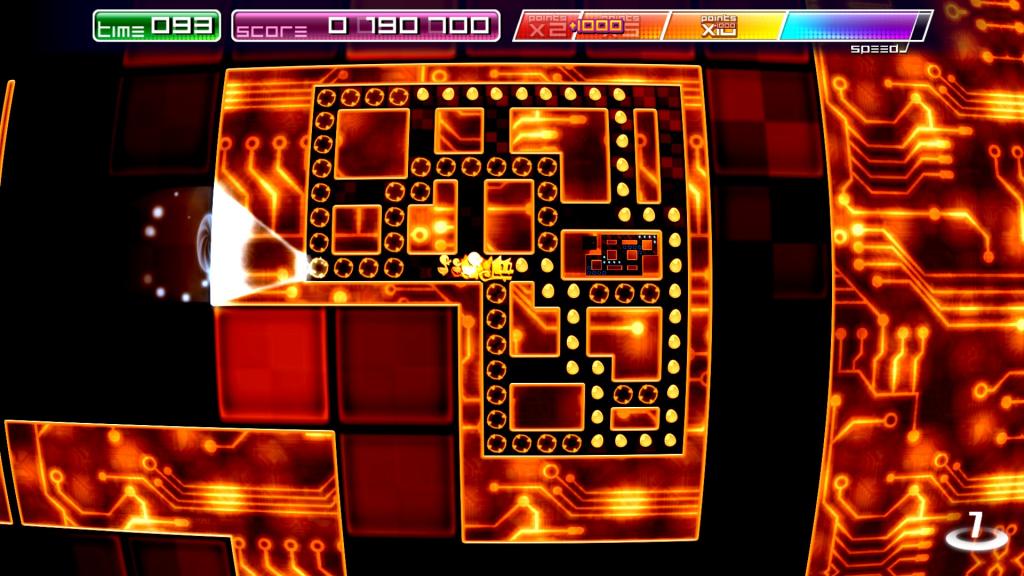 Things do not stay that simple for long.

And happily, controls are the one thing that aren’t going to get in your way. You can play with a gamepad, but because the controls are basically just four directions and because timing matters so much, I actually found the digital-ness of a keyboard to be preferable. You’re either pressing a key, or you’re not!

For starters, there are plenty of aesthetic unlockables ranging from art to announcer packs. For another, the main “Arcade” mode has multiple unlockable difficulties, and the final “Dessert” sets of levels are really hard. And finally – if the fact that I just referred to Arcade as the “main mode” didn’t clue you in – there are a number of other modes. 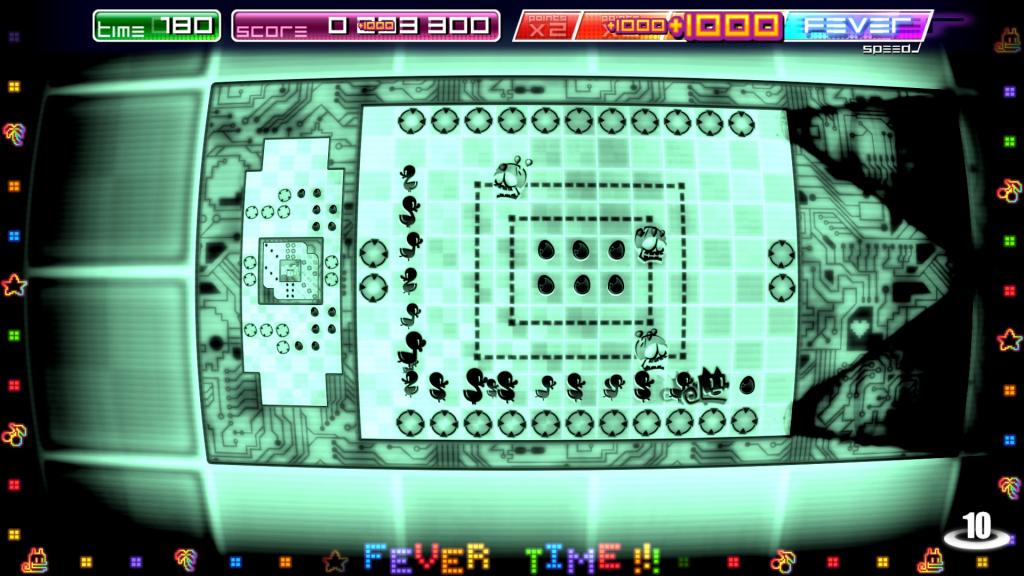 And when you start doing well enough that the game goes into FEVER TIME, things get very fast indeed.

Let’s get Arena out of the way first, for one simple reason: I haven’t played it. I can’t talk about this because it’s the local multiplayer mode, and I have nobody to play it with, but it appears to add a bit of Bomberman to the proceedings as you try to screw over everyone else.

Laboratory is a “puzzle” mode. In this, Pix keeps moving until he hits a wall; your task is to gather all of the eggs before hitting a target zone, and to do it within a certain number of moves. Either I’m very stupid, or it quickly gets hard, particularly once the levels start to incorporate moving enemies and forcing you to time things very carefully. You can proceed if you go past the par number of moves, but saving a single chick before gathering them all results in an instant game over. Careful thought is required here.

Then there’s Nostalgia, which is my favourite of the modes. This, basically, is Snake. Eggs randomly spawn, and you have to pick up a certain number without trapping yourself to beat each level. To make things harder, this mode employs a lot of the tricks that the Arcade mode uses; some of the levels will have multiple stages you’ll have to wander into and out of, or teleporters that shunt you into other parts of the level, and you’ll have to make use of all of this to succeed. And as Laboratory and Nostalgia each have around 100 levels, they’re not the sort of thing you’re going to quickly sail through – particularly if you’re going for the bonuses on every level. 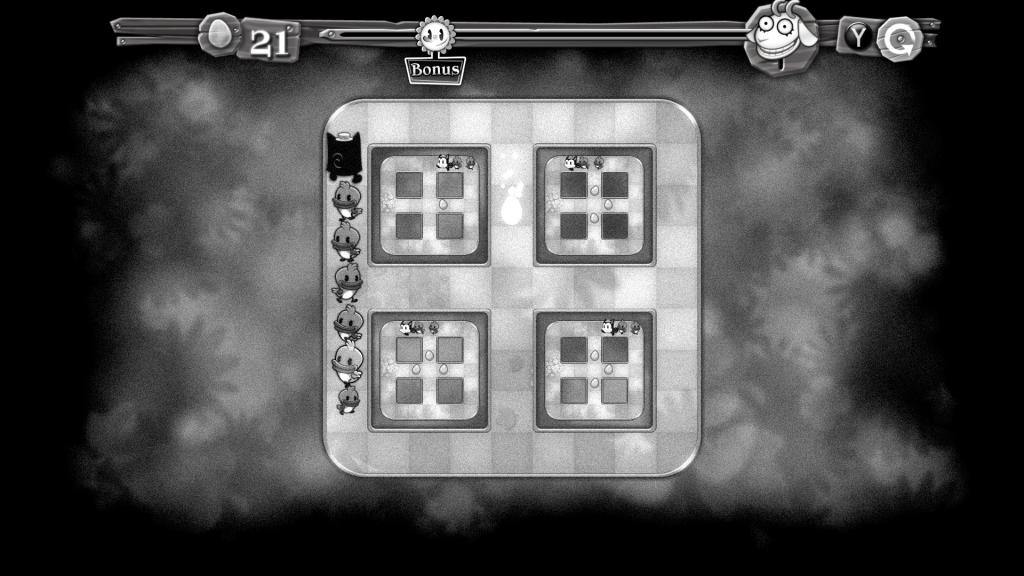 Nostalgia mode gives everything a lovely early-Disney feel… and then makes you control five versions of Pix at the same time, or gives you a layout full of narrow corridors you can easily trap yourself in, or adds in new mechanics like pits and owls to force you to adapt.

Pix the Cat is not the sort of game you’re likely to play for even a 30-minute stretch. You’re more likely to load it up, have a couple of goes at Arcade mode, maybe exit that when you screw up horribly halfway through an otherwise fantastic run, do a puzzle or two in Laboratory, have a quick blast in Nostalgia, and then quit out and do something else.

It is really, really good for this. It’s beautiful, it sounds lovely, the simple controls are finely tuned, and the extra modes mean that there’s something to accommodate whatever mood you’re in. But… well, if you’re looking for something that’ll occupy you for hours upon hours, rather than something to provide a quick and occasional distraction, then this isn’t for you. 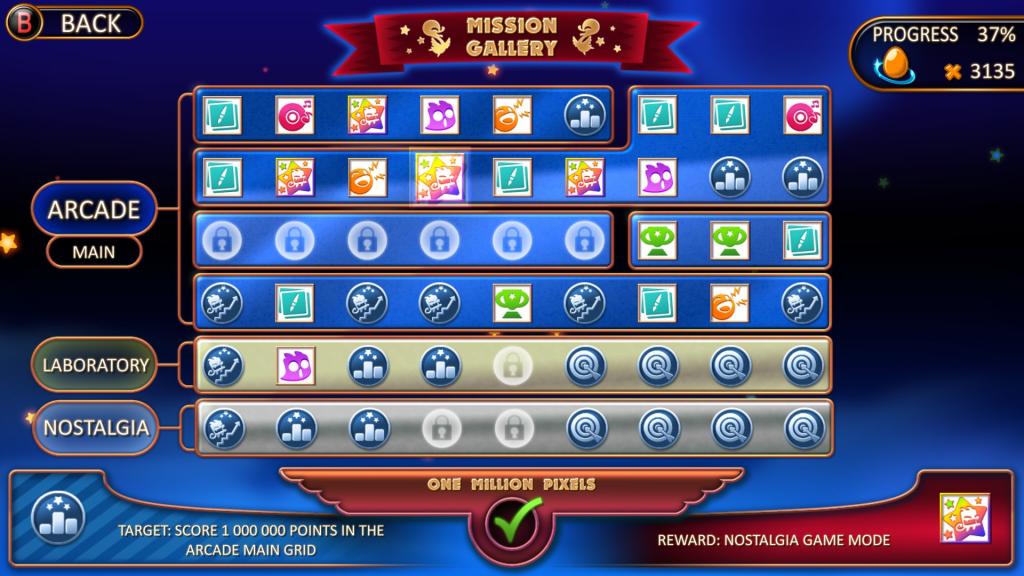 The unlockables are tracked in the Mission Gallery, which shows what you have yet to master and what it’ll get you.

For all of that, Pix the Cat isn’t quite as perfect as, say, Pac-Man: Championship Edition. It doesn’t quite have the nigh-miraculous merging of everything that drags me into a Zen state, where I’m playing without consciously thinking at all. But that’s hardly a sin, and certainly not something that would stop me recommending this.

No, if it sounds at all appealing, you should absolutely consider Pix the Cat – particularly at the asking price of £6.99. It’s a game for quick distractions more than extended play, sure, but if you have a laptop or the sort of schedule where playing something for five minutes is something you regularly do, Pix the Cat is something you’ll go back to again and again. It’s more easily recommended on a handheld system, but online leaderboards, daily challenges, the various different modes, and all sorts of missions that unlock new stuff will make those occasional forays into it happen a bit more often, no matter what system you’re on. And that, really, is the point.