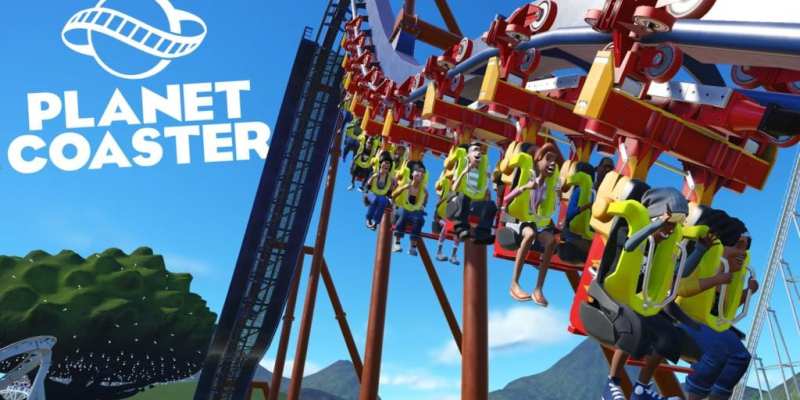 I’ve messed around in Planet Coaster for a while during the beta, but it’s only this week that the game has started to really fall into place. That’s thanks to a series of patches which have improved the game’s overall performance and added more features. With the release patch installed, it was time to find out if Frontier’s return to the rollern coaster theme park sim genre has been worth the wait.

The first thing that’s noticeable about Planet Coaster is that Frontier want players to have multiple ways to approach the game. There’s the Career Mode of pre-built parks with pre-existing problems and challenges to overcome, a Sandbox Mode where anything goes, and the Challenge Mode which is probably the most sim-like mode in the game.

Having access to everything with no limitations is all well and good, and the sandbox is definitely the place to experiment, but as far as making Planet Coaster an actual game is concerned the Challenge mode is the most interesting way to play. Let’s start with that.

The maps are fairly large.

Confronted with a plot of land and a simple entrance onto the map, there’s a small budget to help players get started. After plonking down a pre-built coaster or  a basic ride, customers start populating the park. These visitors need to be kept happy, fed , watered, and even kept excited so they rate the park and make it somewhere they want to spend their time and money.  Keep the punters on-side and the money will roll in opening up more ways to improve a park.

Park visitors can be a grumpy bunch and they will eagerly moan about a ride’s scenery, the prices of entry, and even the amount of litter. Visitors will avoid rides if they are too expensive or have a high nausea factor, but each ride can be tweaked to get the balance right so it becomes a popular attraction. The challenge is to keep them entertained and keep them engaged. Any good theme park has themed rides, attractive scenery to look at, and entertainers to keep customers enthused. Planet Coaster is no different. You need all of this in play to be successful.

Queues are popular in Britain.

Planet Coaster isn’t too heavy on numbers; the Park Management tab is where all the monetary action and customer feedback happens, and it’s also where essential research is carried out. The game doesn’t bamboozle you with figures, it’s all quite straightforward, but there is enough here to make you feel like you’re tweaking the park’s finances. Whether it’s adjusting a staff member’s salary to keep them happy, or, at the most basic level, adjusting ticket pricing, which for some reason is set to zero when you start. A free theme park? Get out!

Not too heavy on numbers.

The management tab also includes research, which, in Challenge Mode, is a requirement to unlock cool new exciting rides and other services such as shops, coasters, or even simple things such as ATMs. Research takes time but can be sped up by assigning more monthly budget to each task. The more you research the cooler and more inviting the park will become, but you also need to keep the park profitable and that’s why everyone has to be enjoying the existing park and rides.

With budgets under control, the next task is placing more rides. That’s simple enough, but what’s not so simple is making sure they are in the right place. Precise placement can be frustrating at times in Planet Coaster. When dropping a ride down, an entrance and an exit to the ride need to be placed. The entrance has to be connected to a main path and it’s this that can be bloody annoying. Sometimes there appears to be no reason why it won’t connect which means you need to go back in and edit the entrance positioning. This also happens on the exits from time to time. It’s a simple thing, but until you start to understand the game’s quirks for positioning, it can be aggravating.

Pirates are all the rage in Planet Coaster.

Frontier has really thought about how players want to place things in the world and they have added a load of options for object manipulation. Items can be rotated, raised, moved, height changed, well, they have it all covered. This is a huge plus for anyone who’s particular about how their park should look. The terrain can also be terraformed with ease to make a park less dull. These tools can also be used to create tunnels for rides to make them a little more thrilling.

The game comes with a whole load of objects to place to get you started. There are scores of objects, like trees and other visual props, with many being based around a particular theme such as medieval or pirate. There’s enough included to create quite an impressive park. There is also direct access to the Steam Workshop which has literally thousands of user created items to enjoy. Like Colossal Order’s Cities: Skylines, Planet Coaster is embracing community creations, and that’s a huge plus for the game and the players.

This could do with some work.

This wouldn’t be a coaster game without the ability to create said roller-coasters, and all the tools are there to construct some crazy rides. Creating a coaster is probably the trickiest part of the game because whatever you create has to actually be viable. You can’t just create huge vertical climbs and expect it to work. Gravity, nausea, and fear-factor all have to be taken into account. Fatalities would be pretty bad for business, after all.

Building a coaster involves starting with an entrance and deck and then building from there, usually with a chain lift to pull the cars upwards. Once at the top the initial drop will determine speed which will allow the cars to coast around any loops or bends. This sounds easy but it’s far from it. It took around an hour to create a half decent functioning coaster on my first attempt. I was making loops too steep, drops too short, well it was a disaster. With some tweaking of the track heights, loop tightness and drops, eventually it was functioning. The first working version was also too extreme for the park goers. I had to actually tame it down so people would ride it. What a bunch of blouses.

Coater creation can be tricky at first.

There’s no doubt a lot of thought and care has been gone into the coaster creation tools, because you can do just about anything that would mirror an actual roller-coaster. Twisting, rotating, raising, inverting of tracks, it’s all included. Thankfully, it’s easy enough to use the premade sections to get it all working. You can then mess around with it at any point later by closing down the ride and clicking the edit button. There’s also an auto-complete button which will help complete the track. It’s a bit hit and miss, but it can be useful.

If you really get stuck you can also place down an existing pre-made coaster and then click the edit button to change it. This is not a bad idea when you start out, it’s a good way to learn the tools and how all the sections should fit together.

Editing rides and buildings is an important feature in Planet Coaster. Most things can be changed, and even shops can be tweaked with each building being broken down into sections. If you don’t want a white wall then change the colour. If the music of a ride is not quite right then change it with one of the pre-made tracks, or even use your own.

The sandbox mode is where you can go wild. With an unlimited budget there are no restrictions, and there’s no need to do any research because it’s all unlocked. While this a nice option to have, it’s probably something to look at after playing the Challenge mode. It’s not much fun, or even much of a sim, if you’re not continually being challenged with objectives.

Attention to detail has obviously been important to the dev team. The park goers look great. It’s all stylised and cartoony, but their animations and how they move about the park are quite realistic. How they interact with the rides, or even the entertainers you can add to the park, are fantastic to watch.

The Ride of Terror in all its glory.

The game’s options are also worth noting because just about every hotkey and mouse action can be changed or rebound. Initially I was having trouble with my middle mouse button not being recognised, which meant rotating the map was impossible. Thankfully, I could rebind to a different key and it was all fixed.

A lot has been done to the game right up to launch, as the performance has been significantly improved. During the beta, building coasters was a challenge as they game seemed to stall and stutter but that has thankfully been resolved. Performance wise, I no longer really have any complaints.

Planet Coaster has been great to play. It’s been too long since there was a decent theme park sim and I think Frontier has nailed it. The only criticism I have is that it’s quite hard to fail at making a working park, even in hard mode, and hardcore sim fans may find the finance management a little lacking. That doesn’t take away from the enjoyment of creating park though, and difficulty is almost secondary here. Once you’ve played it for a while you just want to be creative.

Planet Coaster is a really solid game and theme park lovers should be playing this.