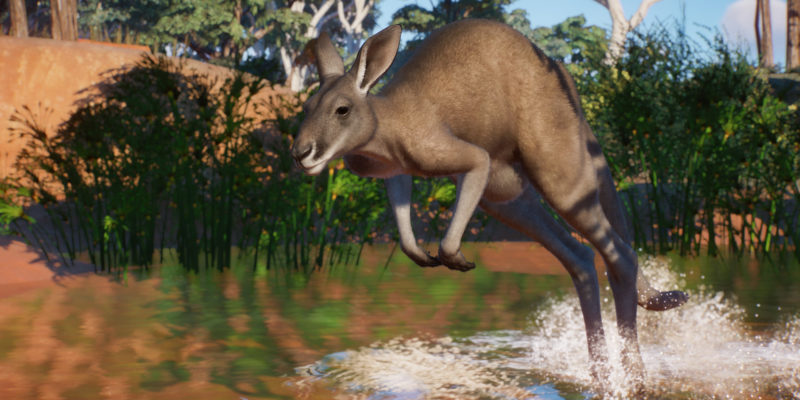 The next DLC pack in Planet Zoo sees us going Down Under. Frontier has officially announced the Australia Pack, coming on August 25 alongside a free update. The DLC will be $9.99 and can now be added to your Steam wishlist.

What does the Australia Pack bring to Planet Zoo?

As usual, the DLC will bring five new iconic Australian animals to Planet Zoo: the Koala, Dingo, Red Kangaroo, Southern Cassowary, and the Eastern Blue-Tongued Lizard. Cute, if not slightly deadly, but that’s Australia for ya.

With new animals come new items, of course. New flora, scenery pieces, and animal enrichment items will come with the Planet Zoo Australia Pack as well. In fact, there will be over 230 new scenery pieces. Of course, the question remains whether Frontier would be better off focusing on adding more animals instead of creating so many new scenery pieces.

August 25 also sees the free Update 1.3 go live. There are no significant new features, though the new animal color variation is a neat addition. Six percent of the jaguars, for example, will now be black jaguars, and llamas will also get additional colors.

A new quality of life feature is the Animal Food Management page. Here, you’ll have a clear overview of which animals in your zoo are eating what food, how much it’s costing you, and how hungry the animals are.

Free new scenery pieces will be added to the update, so not everything is limited to the DLC. They include new foliage and three new paths, and as usual, some new rocks to match the new sandbox map as well.

Vending machines will also be added as a cheaper alternative for guests to satisfy their hunger and thirst. They will be less effective as well, though, so don’t forget to place some actual shops too!

And not least of all, you will now also finally be able to turn lights in your zoo on and off manually. No more waiting for them to come on at night automatically.