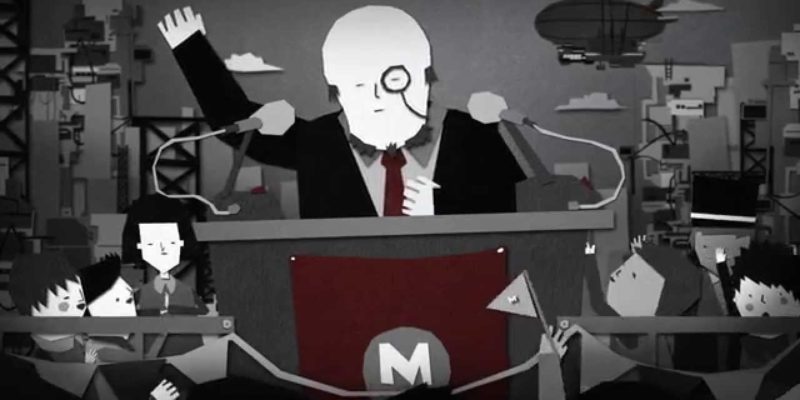 The color red catches the eye immediately; it may signify danger, blood as it appears outside of the body, may be associated with rage, or simply share a part in the color spectrum that would indicate a negative entity. However, when it comes to Monochroma, there is a certain level of wonderment as it emphasizes the environment that is otherwise wholly grayscale. This is in contrast to the elements found within the game, where there is a hint that evilness that may be afoot. Red becomes visually potent when all others colors are simply non-existent.

The story keeps simplicity in mind: the world exists in the dystopian 1950s, robots are a household commodity, and a large corporation is plotting to harvest humans. You know the drill. While the story progresses slowly by withholding text, voice actors, or cinematics, it does have its tense moments while expanding past the initial small town farm setting. The art style begins to show us similarities, such as the red found within the farm equipment, manned by humans, and the other robots, which are self-propelled. The two main characters are also held to the same rule: the older brother sports a red scarf and the younger brother with aviator goggles resting atop his head. In many instances, a sense of scale is emphasized by the camera’s panning outward. The landscapes are vaster than other 2D platformers out there, but they simply lack the polish where other titles excel.

There are a lot of themes within the game which, in some cases, overshadow what could have been easily expressed with notable or likable characters. The tale immediately drops you into the role of caregiver to your younger sibling. After falling through a flimsily covered rooftop, it is now time for the expedition to ensue. For any of those out there who have siblings, either younger or older, you will know the true growing pains of childhood. Little brother/sister wants to tag along, injuries ensue, and of course, trouble follows not too far behind. Maybe you were that child, in which you may truly know what it is like to want to follow along on such an adventure. In Monochroma, baby brother must be carried through each level, becoming the main mechanic in which you must discover ways to traverse rooftops, crates, and industrial machinery, all while keeping him safe in your journey.

Much like any small child or sibling, baby brother is afraid of the dark. With robots and ape-like grunts roaming about, there’s no reason why he wouldn’t be, right? You can only place your brother down in certain lighted areas, thus contributing to the shape of puzzles to come. These must be assessed before taking on certain areas — such as leaps that are too high to land safely or environmental obstacles, such as fire — or attempting to progress the story, as they may lead to abrupt deaths. Certain jumps can only be achieved without carrying him so that you can jump higher and farther without him physically weighing you down. This is one feature I felt could have had more interaction, being that the game is heavily focused on the industrialization and production of these “beings” that have seemed to infiltrate households as a commodity.

Something unique does, in fact, come about from the symbiotic relationship: it slowly became natural to find yourself in situations where you question your actions based on the physical location of your brother. The annoyance begins to change with the story, as it becomes natural and easier to function with him literally on your back.

Without tossing out any spoilers, emotions are stirred when that symbiotic relationship is disrupted in any sense.

The gameplay is fairly simple. There are various obstacles in which you either platform/climb or configure/re-configure to progress the level. The puzzles range in difficulty from easy to mildly difficult — there weren’t any that I found extreme by any means. The only difficulty can only be found in repeated attempts to make stiff jumps from moving platforms that sometimes lead to high falls. Save points, although spaced often, are not too forgiving in the long run. The scene will pan in and out as needed, never hindering your field of view, but always offering a glimpse into the scale of the game. This is in comparison to games like Limbo, where a close field of view is the position of choice. Some similarities can be drawn in the minimalist art style, but Monochroma is by no means an adaptation cut from the same cloth.

The biggest gripe with Monochroma is in the physics department. The game features simple platforming accompanied by the ability to grasp, pull, and push objects. The process of leaping and grappling becomes easily frustrating and an all-around task that doesn’t seem to remedy itself over the course of the game. Much like that of the difficulty, the platforming becomes more challenging. It doesn’t test much of your response time or newly learned skills or cause treacherous deaths; instead, the challenge comes in the form of broken animations and touchy physics that simply steal the show. To put it simply, the platforming never really becomes comfortable — only something one must tolerate over the course of the game.

Monochroma is filled with stylized, minimalist architecture, which is a pleasure to the eyes.

It wouldn’t have become a hindrance if the deaths and frustrating platforming didn’t affect the way in which the story progressed. However, there were tense moments, as the game provides a vast use of scale to emphasize story, where tactical platforming was crucial. In most cases, this was faltered by lackadaisical, stiff animations. These weighted moments left me stepping away from the game often.

Monochroma turns out to be a game holding a lot of potential. The storyline provides a uniquely expressive journey that is driven primarily by its art style. In the same breath, the game also features frustrating physics and platforming that hinder an otherwise joyful experience. The game supports both keyboard and controller, neither of which make a difference, being that your skills will never become refined enough to truly enjoy this game.

Ubisoft: Watch Dogs Day 1 Sales Higher Than Any Other Ubisoft Title Ever