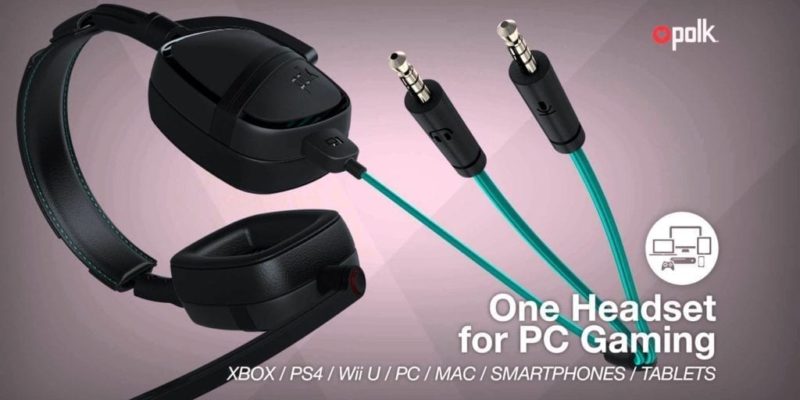 Disclaimer: A review sample of the Polk Audio Striker Pro Zx was received for review purposes. The headset was tested across various game platforms, including PC, Xbox One and mobile devices.
During the hustle-and-bustle of E3 2015, I was able to wade through the crowds and find Polk Audio nestled in the back of one of the busy halls. Being the curious cat, I immediately grabbed the closest headset within reach and played a few rounds of Mortal Kombat X. All of the mentioned has led to this current set in my possession for review.
The quirky title of the company, Polk Audio, bears with it some notoriety. The company is widely known for its presence in the audio industry. However, that may sound great and all, but they likely rule uncontested, which is vastly different from the market they’ve set their sights on. That realm is gaming, and aside from the cross-examination many games received, the same can be said for the vast array of peripherals available to those who choose to play. Headsets are no different.
Over my years in gaming, I’ve had a few options in terms of gaming headsets used. This started with interest in reviewing these auditory devices, something that has given me a lot of differing experiences. From things like the Plantronics GameCom X95s, to the wired Tritton Detonator’s, and right down to my informal review of the Turtle Beach XOFour’s (Xbox One) and X12’s (PC)—my ears have heard it all. In each case, the developing company offers a difference in what it brings to the table in order to bang your eardrum.

Keeping pace with the majority of devices, the Striker Pro Zx tears itself from a similar cloth. There is a flexible boom mic, 40-mm drivers in the earcups, and is intended to wear for long periods of time. Even with its slightly more dense build, it isn’t uncomfortable to wear in these sessions. The XOFour’s weigh in at 10.6-ounces/301-grams and the X12’s at 6.4-ounces/233-grams. However, when it comes to the StrikerPro Zx’s, they weight in the heaviest at 11.2-ounces/312-grams. While they are noted as being the heaviest in the gang, there is also something to be said about the design of the set.

Here’s a little closer look at the headrest and protein leather wrapping the outer portions that actually make contact with your head/ears.

Most current headsets boast over-the-ear 50mm drivers in each cup. However, the Striker Pro Zx delivers fairly equivalent sound with a 40-mm speaker size. Striving for an overall stamp of quality in design, the headset boasts a visible metal band wrapped with protein leather, accentuated with a rubber tension band. The wrap extends to each earcup, providing a sleek, yet comfortable design.
The trim of the set is far less bulky that the others mentioned as they rely on mostly plastic and foam for comfort. There is an overall feeling of quality that is both visible and physical in wearing the set. But, the Striker’s also weigh in at a higher price-point, something one might consider in the comfort, luxury, and price trichotomy.

If there is one thing that I can say about the Striker Pro Zx that is beyond a doubt appreciated, it has to be in the realm of flexibility. On the left cup, you will find inputs for the mic/headphone line in. However, the cords included can allow the set to be used for your PC, Xbox One, PlayStation 4, or even your mobile needs. For myself, I put it through various extremes having used it for primarily PC gaming. It did see time on my Xbox One, and of course, saw a some heavy reps at the gym. Even in its heavier design, it wasn’t troublesome.
On the Xbox One, it should be noted that there is a chat adapter included. However, there is a small lip on the underside that needs to be guided over the Xbox One controller. At first, I was caught off-guard as it didn’t slide right into place as other adapters did. Instead it sits stubbornly aligned but won’t slide into place until the lip/tab int he back is lifted and slid on.
The following cords are included in box:

One thing that should be noted is the experience during prolonged use. Of course, there is the additional feel of “hotness” that can be experience from something foreign placed atop your skin. And, for headsets, you might event feel a pinch or annoyance due to the long usage over a given time frame. I can say that even in the heavier built set, there was little discomfort in both heat and weight caused by the set. In fact, I would almost welcome the change in material.

I often found the Striker Pro Zx’ to have variable sound. In some cases there were great mid-to-high’s hitting with clear percussion. Without having an in-line volume control, except for use on everything but the PC, it was a little bit harder to control the overall output threshold. You are definitely not going to get the booming, deeper bass that you would with something that has a bass-boost option, but there is still some thump to explosions and action scenes.
Overall, I was somewhat disappointed with the performance. You’ve got a genuine contender for a spot against the other players in the industry for a sleek headset, and the sound output, while clear, doesn’t pack the depth that Turtle Beach has in its lower end headsets such as the XOFour’s. I found it to be aligning with the Plantronics GamesCom X95’s and the Tritton Detonator’s, both having their own winning attributes. If anything, there could be some compromise in materials used for design, opting for  larger speakers, and providing a bit more depth for overall experience.
In terms of cinema sound, I did find that the Striker Pro Zx’s did perform well with various media types, including movies. I viewed them on my Xbox and used the adapter for volume control. There were instances where the sound overpowered the headset causing distortion. This wasn’t apparent when watching watching “Mad Max: Fury Road”, but noticeable in other audio formats. The XOFour’s could simply handle the variable range. Because, of course, what fun is it to just use your high-end gaming set just for gaming?

Previously, mics were considered mostly important for their use during team-gaming sessions. That has changed considerably with the rise of Twitch and YouTube Gaming. I had two follies with the mic that left me more curious than anything.

This is the Xbox One controller adapter included with the set. Even plugged into your PC with a micro-USB cord, you may tap the “polk” icon for mic mute.

While using the mic on the Xbox One, you have the ability to hear yourself in the headset. With the mic being uncovered and only in a sheath of rubberized material, it tended to pick up almost everything in the room. I could hear the whiz of my ceiling fan and monitoring of my own voice. This was the complete opposite on the PC, only being able to monitor from a single channel and not nearly enough sensitivity. This might have been due to the chat adapter, but I couldn’t rule out what exactly it was.
I also found it odd that the mic mute was at the top of the adapter, cut off by the “polk” symbol. I often found myself out of habit reaching to mute and hitting nothing but a logo.

The Polk Audio Striker Pro Zx is a fair attempt at grasping an untapped market for the audio professionals. They’ve had years to perfect punching audio for home sound systems, but don’t fully pull off the move for the gaming headset market. Things like audio depth, volume in-line (PC) or a audio suite could have remedied the sting from the cost of the set and the overall output they have.
The areas where the Striker Pro Zx excels, fulfills an important aspect to gaming not just on PC, but on console. They deliver great versatility, offering all the necessary input cables to unplug from your PC, walk over to your console to plug into your Xbox One controller and never take off the set. All cables for each of these, including a mic-in for phone use, are included.
While the design fared well, there was a bit more depth to be desired in the overall audio. Crisp highs and mids couldn’t pack any more punch, that is, unless they had the ability to provide more depth to them. The overall quality of the set leaves impressions of durability and sturdiness.
The core mechanism that would draw someone to deviate from previous headsets brand really boils down to the sound. While impressive, the mid and high punches don’t deliver on the real estate space Turtle Beach has managed to do business in.