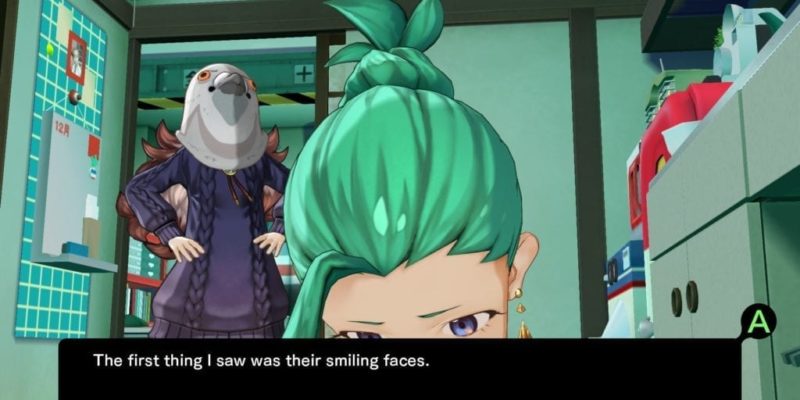 In the interest of full disclosure, I need to say that I love the Punch Line anime. When this game was first announced, I was extremely excited to get more. But that excitement immediately led to disappointment. No way would they bring a visual novel based off an anime that flew under the radar to the West, right? Well, to my pleasant surprise, it turns out that they would.

When it launched late last year, two-and-a-half years after its Japanese release, the PC version was listed as launching alongside its console counterparts. Come release day, however, it was mysteriously absent from any storefronts. Now, another half a year or so later and here we are. It took three years for me to finally be able to play this game. And while Punch Line probably won’t mean nearly as much to anyone who wasn’t already totally sold by the anime, I’m happy with it overall.

At first blush, it’s perfectly understandable to look at Punch Line and assume it’s one of “those” games. You know, ones meant for simple titillation and not much else. I thought the same thing back when I first heard about the anime. But then I saw that it was being written by Koutarou Uchikoshi, the man behind the Zero Escape series. That made it clear to me that it was unlikely to be the sleazy panderfest I initially assumed. All-in-all, it actually has an intriguing story with a lot of mysteries and a fair amount of depth. 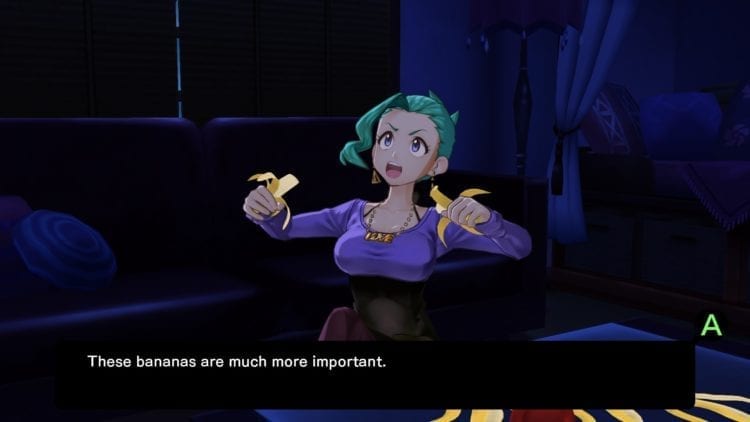 Punch Line tells the story of Yuta Iridatsu, a resident of a boarding house called Korai House. Yuta and his housemate, Rabura Chichibu, are returning home on a bus from seeing Yuta’s sister, Akina, off at the airport. But then their bus is hijacked by armed members of the Qmay group, a doomsday cult. Before things get too out of a hand, a superhero known only as Strange Juice arrives on the scene and fights off the cultists before being caught off guard by their leader, Ryuto Teruoka.

But Yuta has a secret. Seeing a woman’s undergarments causes his hair to turn red and gives him superpowers. Hey, I didn’t say it was a good secret. After transforming due to inadvertently catching an eyeful, he lunges at Teruoka, taking the two of them through a window and into the ocean. Upon being rescued by Strange Juice, however, Yuta is forced out of his body by an unseen assailant. When he wakes up at Korai House, he’s an astral projection that no one can see and his bodysnatcher has holed themselves up in his room and warded it off with talismans.

The plot gets waaaaay more complicated, as Uchikoshi fans might expect. But this setup is where the central gameplay hook comes into focus. Yuta needs to get his body back but can’t do much in spirit form. Luckily, he gets some guidance from a spirit cat named Chiranosuke. The cat tells him that he can get his body back, but he needs to find a book known as the Nandara Gandara. In order to get it, he’ll need to raise his spirit level by collecting soul fragments from the residents of Korai House. 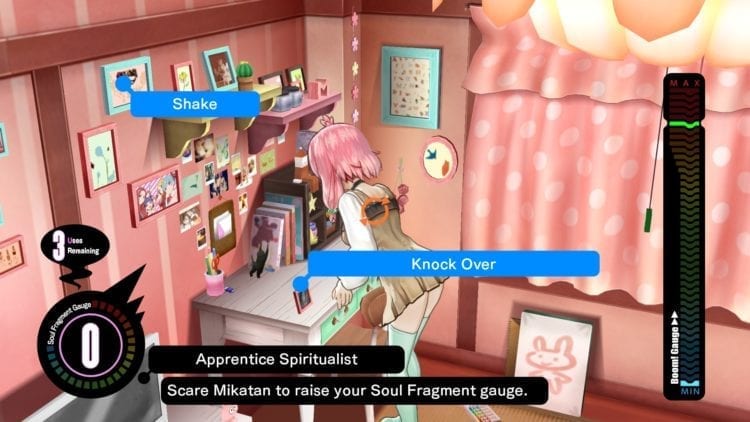 As Yuta is in spirit form, he can travel through walls and floors and go into the rooms of his housemates. At first, he only has very limited spirit abilities that allow him to freeze time and manipulate things. He needs to scare the others, which causes him to gain soul fragments, which allow him to level up. Once his spirit level is high enough, he then needs to set up a trick chain in order to achieve a goal. During trick segments, Yuta can choose which room to visit in whatever order he wants, which adds a bit of freedom.

This is fairly similar in concept to the classic game Ghost Trick. An early chain requires Yuta to get his housemate Mikatan Narugino to find a key to open her locked desk drawer. The key is in the room of Meika Daihatsu, Korai House’s landlady. Each trick and trick chain are extremely basic gameplay-wise. You can’t move around freely, unfortunately. Instead, you get access to a few camera angles which allow you to look around the other rooms. Certain objects have a prompt next to them that Yuta can activate to scare the inhabitant or set up part of a chain.

These are really simple and self-explanatory in the early part of Punch Line. Yuta can only use his spirit abilities a few times, however, and using them all without leveling up or successfully completing the chain will cause him to fail his mission. When he fails, a meteor destroys the entire planet. There’s a good reason for that, I promise. The main challenge in these segments is picking the right prompts, but it’s generally really obvious. For the chain segments, events are set in motion by selecting the prompt with the word “go” written above it. 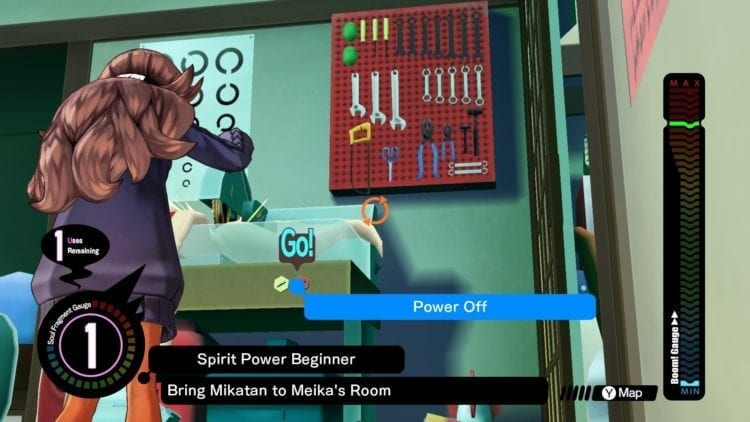 The main obstacle in these segments ties into the game’s undergarment obsession. The right side of the screen has a gauge. When Yuta sees his housemates’ underwear, this gauge increases. If it goes up all the way? You guessed it. Meteor destroys the planet again. Luckily, Yuta can use his spirit abilities to rewind time to before his latest error. Later trick segments add really strict timers and harder-to-find prompts, so you’ll likely end up destroying the world a few times before all is said and done.

Partway through the game, there’s a major story development and these sections dry up, leaving the latter parts of Punch Line as a straight visual novel. Narratively, it has to be this way, but it still feels a little weird to be told that you’re about to pull off your final trick when there’s still hours of stuff left to see. Still, the gameplay segments aren’t all that great to begin with. Punch Line‘s strengths definitely lie in its story.

Visually, Punch Line is very dated. Not only is this a three-year-old game, but it’s also a port of a Vita game. Therefore, it looks like a game that could have come out in the late ’00s or even earlier. Most of the game’s events are told in full 3D, though. All of the major characters have character models and a host of animations. They also have mouth movements that sync up with the voices. The character models look okay, but their animations are kind of rough and very, very repetitive. 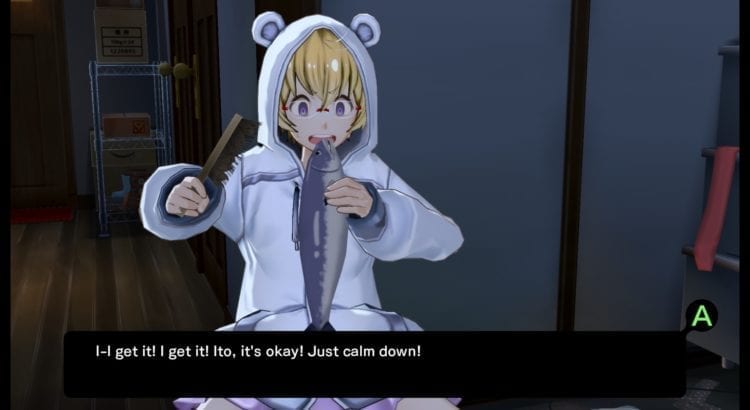 The game’s environments fare much worse. Everything is low resolution and lacking a certain amount of detail. One thing’s for sure, though – this game definitely doesn’t require the GTX 1080 that the store page recommends. Punch Line also uses footage from the anime for certain scenes and stills for others. Some of these are still shots from the anime that even have mouth flaps and minor animations, which is cool to see.

The audio, naturally, is much better. Punch Line has a fantastic voice cast, including such favorites as Haruka Tomatsu and Rie Kugimiya. Since this is a visual novel, there’s a ton of spoken dialogue. Fans of the show will likely love hearing all the new conversations delivered by these excellent performers. However, as people familiar with visual novels would expect, there’s no English dub at all. So, if that’s a dealbreaker for you, you’ll want to steer clear.

Unfortunately, this port has a major issue that I find fairly detrimental. When set to full-screen, the game defaults at 60 FPS. The problem is that the game’s logic is locked at 30, so all animations run at double speed. The only way to solve this is to run the game in windowed mode or use an application to limit the FPS. There also aren’t any resolution options. On top of that, there are still several typos or grammatical errors. Each of the game’s 22 “episodes” starts with a little music video, and each one of these spells the word “director” as “directer.” Plus, sometimes the text refers to characters by the wrong name. 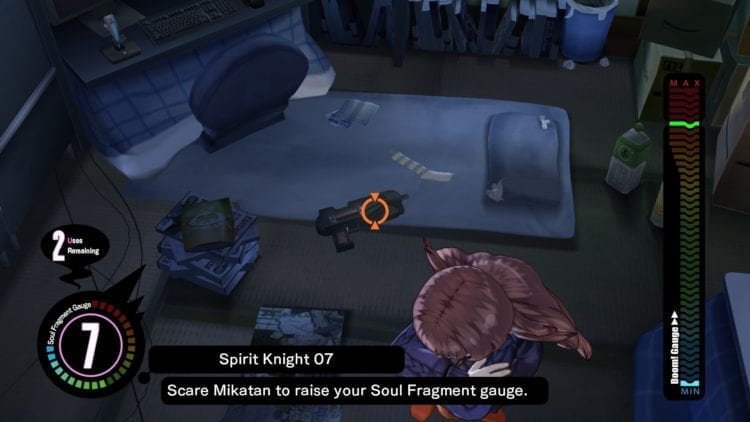 This character is Meika, not Mikatan.

Punch Line is a decent length and is a lot longer to get through than the four-hour anime that preceded it. Most of the expanded material takes place during the timeline of the first 6 episodes of the show. Once it gets past that point, though, the episodes get much, much shorter. Earlier episodes can take a couple of hours each, but later ones are sometimes only about 20 minutes. The penultimate episode is also just basically the final episode of the anime, which might disappoint some.

Overall, I really enjoyed this game. As a big fan of the anime, Punch Line delivered most of what I wanted. The visuals are very dated, the gameplay dispersion is uneven, and some of the later episodes seem too brief, but it’s definitely an example of a solid visual novel. Despite the way it appears initially, the story is a rollercoaster that is oftentimes very funny, tragic, and bittersweet. This version could use some fixing, but I’m really quite glad about how it turned out and even more glad that I got to play it.

Punch Line isn't for everybody, and this port has some issues, but it's a solid VN with a great story and an endearing cast of characters.

GOG launches its summer sale with a free game