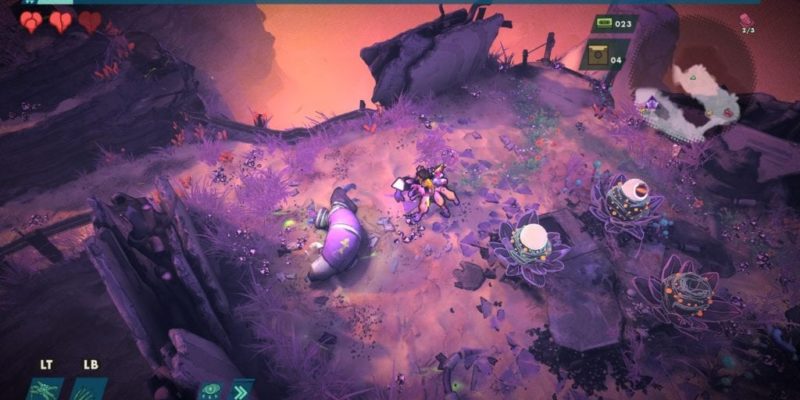 The ground is scorched and barren; life as we know it has ceased to exist. But life finds a way. And then war, again, because war never changes. Rogue-lites also aren’t big on changing. And RAD, a rogue-lite that takes place after two nuclear apocalypses, is very much a prototypical rogue-lite that doesn’t do much different. So, does it live up to its name? Or is this one wasteland too many?

Personally, I tend to lean really hard to one side or the other when it comes to rogue-lites. Either I dig them and want to play more and more, or they make me grimace and want to stop playing. To be upfront, RAD is a good game, but it’s a game I don’t enjoy much overall, even if I really liked certain aspects of it.

RAD‘s setup is that mankind has been pushed to the brink after two nuclear wars. An enclave is in dire need of power, so they pick a kid to get “re-made”, which makes them more receptive to radiation. They then send them into The Fallow, the irradiated wasteland, to go and find a MacGuffin that’ll let them power stuff again. It’s not like a rogue-lite needs a whole lot of introduction. 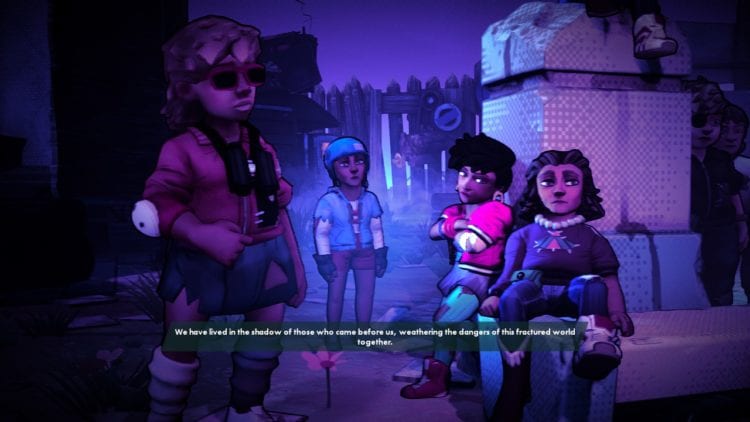 The structure is just as simple. You begin every run by picking a kid and taking them into The Fallow. There you have to fight your way through multiple worlds while trying your best to survive. Each level culminates in either a mini-boss fight against a few strong enemies or a proper boss fight. Clearing each grants you access to two teleporters. One lets you go back to the enclave to buy items or bank your currency. The other takes you to the next level.

RAD‘s currency is cassette tapes you find throughout the levels. Why cassette tapes? Because the game’s motif is post-apocalypse and “lol 80’s.” The enclave has a bank that allows you to deposit these tapes, and you’ll need them to buy items there and in the levels from various merchants. The more tapes you bank, the fancier your account gets. The standard account has no special perks, but get a platinum account and you can get tapes from ATM-type machines out in the levels. The titanium account basically lets you use credit to pay for things with whatever you have banked plus a 20% fee. It’s clever and works well. Plus, how silly is that?

When you die, you lose all the tapes on your person – unless, of course, you have a special backpack.  You’re then taken to a screen to show how much experience you got. Experience is accrued by killing enemies. Whenever you reach a certain threshold, you’re granted new bonuses, such as weapon skins, characters, harder modifiers, and new items sold in the shops. Between bonuses from banking tapes and XP, almost none of them make the game any easier. RAD isn’t one of those rogue-lites where you get stronger bit-by-bit. You just gotta be really good to win. 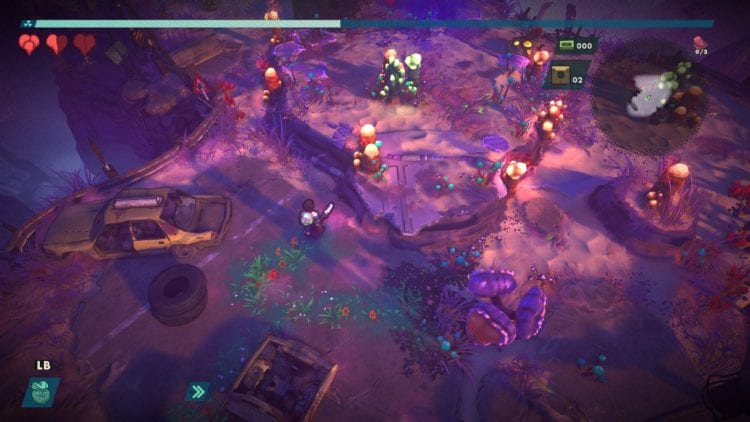 Thankfully, RAD‘s controls are super tight. Your moveset is mostly limited, but everything is very responsive and the gamefeel is great. Oddly, you only have a single weapon: a bat. It has a short combo and a lunge attack that you use by pressing the jump and attack buttons at the same time. There’s also a jump kick that lets you kick forward a few feet, plus a stomp. Naturally, there’s also a dodge button. These all work very well in concert with one another. Despite their simplicity, chaining them all together gives you access to fairly robust movement and combat options. There’s just the obvious caveat that you have no permanent ranged attacks at your disposal.

RAD‘s randomly acquired abilities are all mutations. As you defeat enemies, a bar at the top of the screen fills up and you take on radiation. Once your radiation reaches a certain point, your character mutates and gains a new ability. There are a decent amount of these, and they all have their uses. Some may change your character’s head into a snake that scares enemies or a weird mushroom that expels air. Others change your character’s legs to be spider-like and let you burrow underground, or they become bull-like and let you dash. Still more change an arm into a big boomerang or let you shoot fireballs. Plus, there are mutations that give you more passive bonuses, such as increasing the amount of health you get from items or making you resistant to toxic liquids.

You can also acquire mutations from these big statues that you can interact with. These are typically found underground, but they can occasionally be located in the overworld. Other than the boomerang and spider legs, though, I didn’t find many of these to be extremely useful. So regardless of your mutations, you’ll still rely mostly on your default moves. I was a little underwhelmed by this, as it meant I wasn’t looking forward to mutations as much as I do for the power-ups in most rogue-lites. 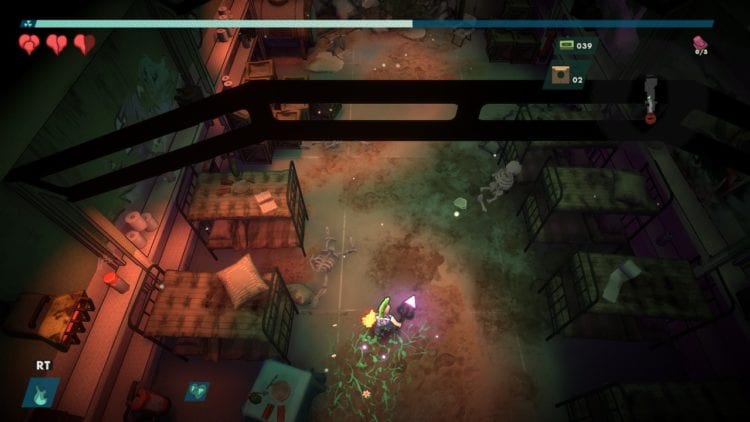 The structure of the levels themselves is fairly simple, although it gets tedious over time. Each level has you activating some devices that open the way to the boss room. In earlier levels, it’s as simple as walking up to them and holding a button. Shortly after, though, you’ll have to activate smaller things to gain entrance to a special underground area to activate the device. It gets old.

Not much of a tank

One of my big issues with RAD is how health works. You start the game with three hearts, which each contain two halves. Most enemies do half a heart of damage, while some do an entire heart. Defeating mini-bosses gives you an extra hit, while defeating proper bosses gives you a whole additional heart. But no matter what, you die extremely easily. Making a slight slip-up early on can see you dying in three hits to a strong enemy. And most healing items only heal a single heart, making them not all that useful. I’m all for these games having a big penalty for screwing up, but here it feels too severe to me. Enemies can also drop health, but this is usually limited to healing half a heart.

On top of how low your health is and how hard it can be to refill it, certain aspects of RAD‘s difficulty seem fairly unbalanced. Don’t get me wrong, the game is extremely difficult in the beginning, but things can get even more ridiculous. For instance, by the second world, you can be walking around and suddenly get accosted by a horde of enemies. Some of these enemies can leave the ground burning after you beat them, which results in you taking damage. Some shoot you from a distance. Others can charge at you and dish out a ton of hurt. 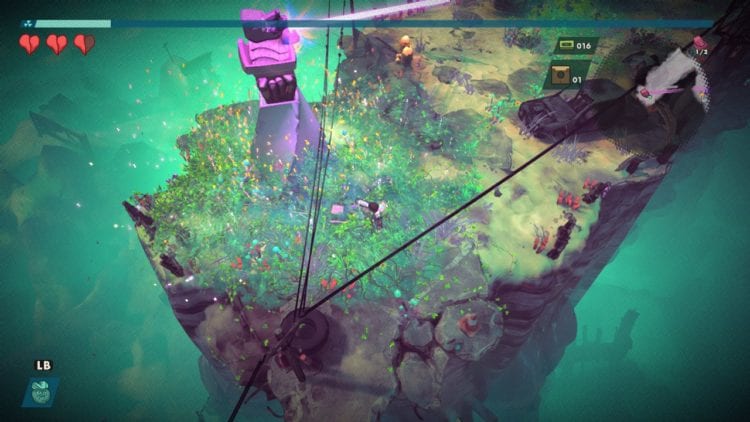 So you’re fighting all of these enemies, but there can also be enemies from even further away lobbing bombs at you to dodge. Plus bear traps. Enemies hiding underground that jump out and hit you as you walk over them. Red thorns on the ground. And sometimes the game’s lighting changes and makes everything you see the same color.

So imagine fighting off all those enemies and avoiding traps, but the game just abruptly becomes pure red and, gee, you can’t see some of the enemies now. Oh, and the lighting is the same color as the thorns, so you might walk on one of those. You might then get burned by the fire from defeating an enemy that you didn’t realize was a fire enemy because the screen was red. Did I mention sometimes you’ll just get struck by lightning with barely any way to dodge? That’s not challenging, that’s unfair. Especially when you can lose all of your health in mere seconds while all that is happening.

So, yeah, RAD is frustratingly difficult a lot of the time. But you do have some options stashed in the menu to make things easier if you need. These options can double your health, eliminate falling damage, and increase your damage, among other things. Even with all of them on, the game is still really hard, but it’s great that the game can be played by people who might not be up to its insanely high challenge.

Hop in your DeLorean

Aesthetically, the game tries really, really hard to ooze ’80s. The clothes, the items you collect, and even RAD‘s color palette all come together for that specific look. It works, even if the style has been rather overdone recently. The game still looks really nice. The levels look great and colorful, and the monster designs are solid, even if they’re not all that memorable. I just wish the game had a personality that went further than repetitive nostalgia. 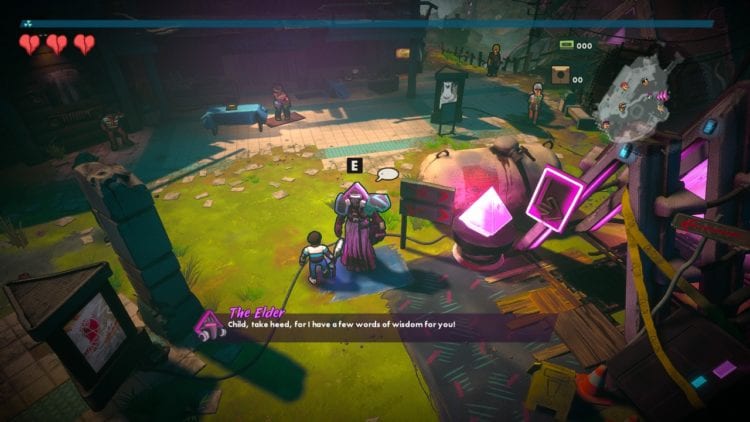 RAD is a good game. It looks great and plays very well. However, if you don’t like extremely hard games, you’re probably not going to like this one. RAD is one of the hardest games I’ve played in recent memory, and I’m not sure it needs to be this difficult. As good as the game is, it just really feels like the devs focused way too much on making it hard. I wish they had put more emphasis on making it more fun instead. But anyone who loves punishingly hard games and satisfying action will find a lot to like here. As long as they have a high tolerance for frustration, that is.

RAD has excellent gameplay and great visuals but is very, very difficult. Fans of extremely hard games will likely get a kick out of it, but people looking to slowly power up in order to make their rogue-lites easier should stay away.

By Will Backus18 hours ago
Reviews