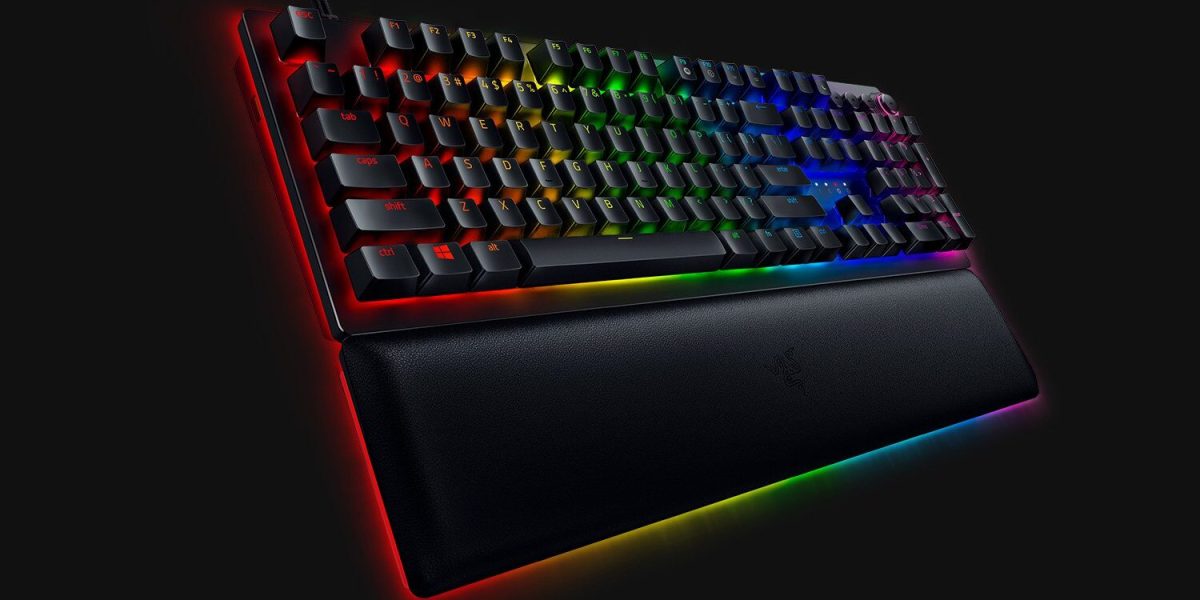 Analog keyboards have had a mixed bag of results for quite some time. The premise is quite simple: simulate the analog functionality of a controller, but with a keyboard. Rather than the usual switch you may be used to with your mechanical keyboards, analog utilizes light to determine the pressure and movement of a key press, giving you more precision with presses. The Razer Huntsman V2 Analog Optical Gaming Keyboard has been out for just about a year at this point, and it remains not only Razer’s best keyboard, but the best analog keyboard option period.

Looking at the Huntsman V2 Analog, you’d get the impression it’s just your typical, run-of-the-mill keyboard. It has a pretty sleek black design with no dedicated macro keys to show. Its body is plastic with an aluminum board underneath the keys. There’s also RGB galore, including on the included palm rest. Speaking of the palm rest, it’s arguably the most comfortable rest I’ve ever used on a keyboard. Even after long sessions, it still feels nice just setting my wrists down on it.

Build quality wise, it feels as sturdy of a keyboard as anything out there. It comes in at around 2.5 pounds and feels like it could do some heavy damage if you swung it. Obviously, I don’t recommend ever doing that, but the point still stands.

The one design gripe I have involves the keyboard connection. It connects to your PC via USB-C (a USB-A adapter is included if needed). For the USB 3.0 passthrough that sits on the left side of the keyboard, there’s also a USB-A connection for your machine. The connection types are great, but the cable is quite bulky and it can’t be detached from the keyboard. When most high-end keyboards over the last two years have offered removable cables for quick repositioning and storage, it’s confusing as to why Razer decided to go in a different direction.

Again, analog keyboards’ largest selling point is their ability to provide finer actuations than traditional mechanical keyboards. The Razer Huntsman V2 Analog keyboard works by each key having its own LED underneath to detect the difference between half and full presses.

Think of it like playing a racing game, like Forza Horizon 5 or Grid Legends. When playing with a controller, pressing on the triggers to various degrees will determine the force of the throttle. Now, move that to a keyboard. Should you decide you want to play a racing game with it, you can achieve that same level of actuation detection. And, to be honest, Razer does as great a job as possible to recreate that feeling.

Sure, you aren’t going to get the same feedback that you would with a controller. However, you will be able to finely control the speed of your car in racing titles. In games that require some sort of stealth, the analog feature makes sneaking around that much more satisfying. Going back and playing Splinter Cell: Blacklist feels like a completely different experience on PC when using the Huntsman V2 Analog.

The keys themselves offer two-point actuation, allowing two custom bindings per key. This allows you to bind an action when the key is initially pressed while binding a secondary function when pressed further in a range from 1.5 millimeters to 3.6 millimeters. This can be done in a per-key setting or in groups.

Because of the optical lighting, key presses are near silent due to lack of traditional switches. And the response time is faster than most offerings as well. Whether gaming or typing, the keyboard is a comfortable and responsive device that offers some pretty satisfying usage.

The biggest problem I have, and will continue to have with Razer, is it’s Synapse software. I’m not going to sit here and harp on it too much, but it’s just not a very user friendly piece of software. It’s tough to find what you’re looking for, and the average user may give up before learning all it has to offer. 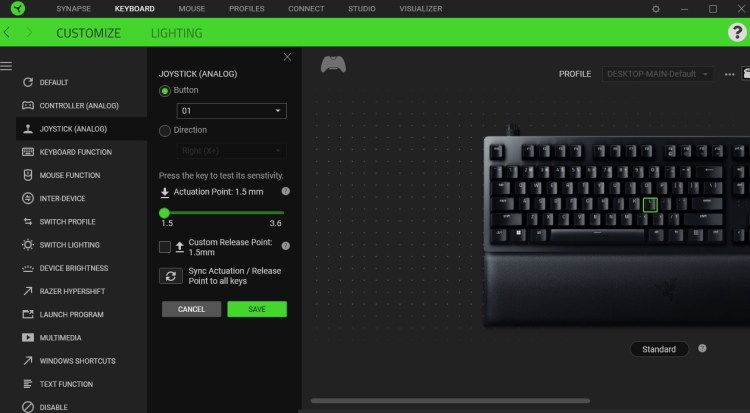 Should you be determined to fully understand Synapse, there is plenty there to do with the Huntsman V2 Analog. As mentioned, each key offers dual-point actuation, leading to thousands of possible full keyboard configurations. There are dozens of custom function options from Razer, as well as the ability to disable keys entirely on a profile. You can store up to five profiles on the board, but what makes this stand out is the ability for cloud storage of profiles. It gives you more options than ever to make each game you play have the bindings you prefer.

Another annoyance involves how your PC detects the keyboard. Because it’s an analog device, it is detected as an Xbox controller in Steam. Even your computer’s device manager will recognize it as an Xbox 360 controller, thus installing Xbox 360 controller drivers. This could pose a problem playing some games via Steam. If you try using an actual Xbox controller when playing some games, you may have to either unplug the keyboard before loading up the game, as is the case with games like Elden Ring or Dying Light 2, or change what controller you want being used, like in Grid Legends. 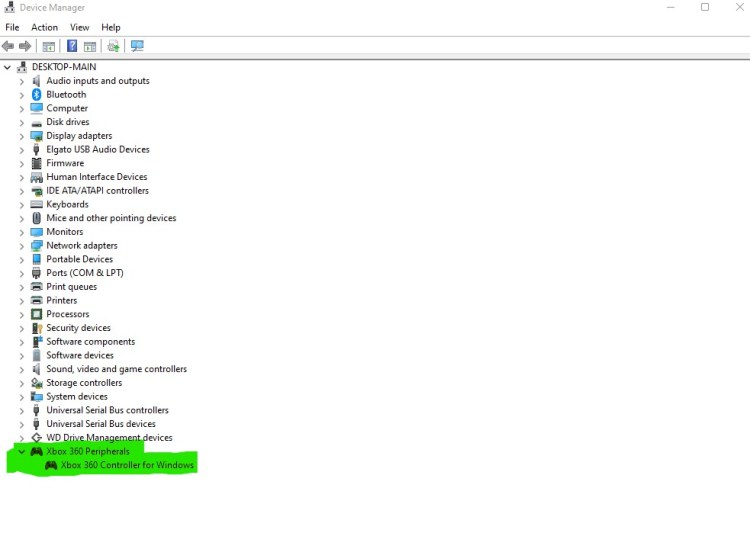 Your computer may detect the keyboard as an Xbox 360 controller, leading to in-game detection issues

The Razer Huntsman V2 Analog Keyboard is a premium piece of hardware at a premium price of $249 USD. It’s a responsive and highly customizable keyboard and offers you control on a keyboard that has only been dreamt about for years. It’s not going to fully emulate a controller, but it’s the closest any keyboard has ever come. Even with the sometimes overwhelming options for customizing and the detection concerns, it’s still deserving of the “premium” tag.

If the idea of having more control of your key presses for gaming sounds great to you, then this board is a must have because there is no analog option that comes close. If you just want a high-quality gaming keyboard and don’t care about the fine-tuned actuations, you might be better off looking elsewhere.

The Razer Huntsman V2 Analog Keyboard is the best analog keyboard on the market by far. It's a smooth and responsive board that feels great no matter what games you play.