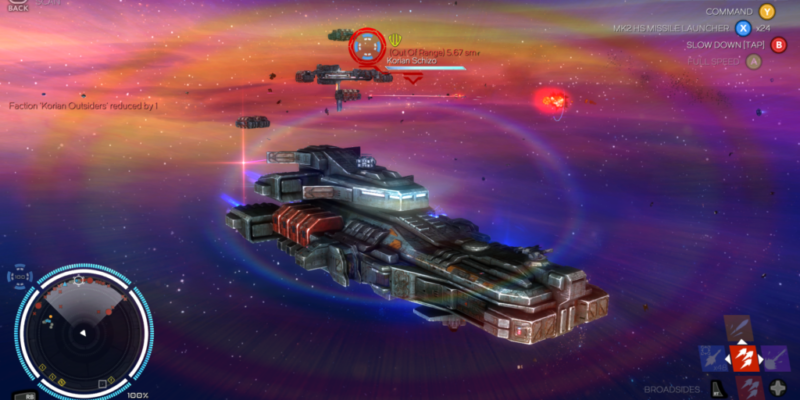 Musical soundtracks and scores can carry a lot of the burden when defining a creative work. If you mentally replace the music in Hitchcock’s Psycho shower scene with a jaunty flourish of trombone toots, it becomes a rather different scene. Adding any kind of score to The Birds would result in a radically altered tone.

Rebel Galaxy isn’t a Hitchcock film, obviously, but the same sort of principle applies. Watch the trailer on the game’s store page, and chances are you’ll come away thinking about cowboys, the old west and frontier justice. Sure, that’s partly down to things like the space-bartender’s choice of threads, but it’s mostly a result of those sliding steel guitar sounds; an automatic audio cue for Deadwood towns and Stetson hats.

The Rebel Galaxy soundtrack is basically some of The Cult’s more overt moments of Americana filtered through the Longmire theme. As it happens, this turns out to be a fine accompaniment to cruising through space and blowing up pirates.

Sci-fi portrayals of humanity’s expansion to the stars have regularly relied on dog-eat-dog themes of survival, and videogames have quite often followed suit. Elite’s cold, Thatcherite-informed economic model had an ‘anything goes’ laissez-faire feel, where cash was almighty and anything could be bought and sold. In Rebel Galaxy, it’s more of the Firefly route. Kill or be killed, sure; but with a swagger and a sense of humour. More Han Solo, fewer dour Austrian economists.

Double Damage’s galaxy is one stuffed with romanticised American frontier parallels, from mining towns (or floating platforms, anyway) to roaming bands of outlaws. Lawlessness is the norm, and it’s always wise to make sure your ship’s weapons are up to scratch.

Your nameless protagonist starts Rebel Galaxy with a ship as trusty as it is rusty, and a vague notion that your Aunt wants to divulge some important information at a nearby spaceport. It doesn’t unfold as smoothly as all that, of course, so before too long you’re chasing around the local starports doing odd jobs and errands for dubious alien characters.

Or, you can say “screw that” at pretty much any time, possibly add a “y’all,” and then fly off to do your own thing for a while. Your ambitions are limited only by the power of your guns and your purchasing power for advanced, star-hopping technology.

Rebel Galaxy’s activity playground should be pretty familiar to anybody who’s played a space trading-and-bounties style game before. In this preview build I found myself delivering religious tracts (easy, but a bit weird,) picking up mysterious dead-drop cargo (risky,) protecting miners from pesky pirates (riskier,) and dropping in on random distress calls to see if I could help (which usually wound up with the imperiled trader getting blown up, but hey, at least that meant free floating cargo.)

Most of those missions were pulled off starport bulletin boards, but you can also figure out some tasks for yourself by keeping an eye on the galactic map and the general news feed at stations. Is there a glut of luxury goods pouring into a certain location because they’re having some kind of national holiday? Then that’s probably a cheap way to pick up some classy cargo. It’s also possible to join the Official Trader’s Guild and start getting special missions (as well as access to unique ships and equipment,) if you can afford the fee. Union dues, you know how it is.

Actual fighting, though, is a little different to the usual ‘flight sim light’ (or just ‘actual flight sim’ in Elite: Dangerous’ case) model generally preferred by these titles. Space in Rebel Galaxy looks 3D (and sort of is,) but keeps your ship, and all other capital-type ships, on one ‘plain.’ In other words, you don’t really move up or down when you fly around, which has the effect of turning combat into a bit of a circa-1800s naval affair.

Smaller, fighter type craft can still fly around and over your vessel (and be taken down by missiles or turrets, which can fire outside the flat plain,) but anything larger turns into a contest of pulling alongside and unleashing broadsides. My current craft is equipped with a bunch of deadfire missiles, which I can’t aim at all, but do devastating damage if I’m able to vaguely line up with an opponent and just let loose.

Smart combat tactics involve keeping an eye on your shields and ensuring a more protected side of your vessel is always the one taking the brunt of an attack, while juggling between manual control of turrets, broadside weapons and (if equipped) missile racks. It’s also possible to toggle the auto-firing commands of your arsenal, enabling smaller missiles to be set to things like “just aim for fighters, please.”

Rebel Galaxy isn’t worried about tossing you into fights you can’t win, either. Every mission you take has an attendant risk level attached, so you roughly know what you might be getting into, but flying across the open realms of space is a different matter. You might be trundling off to a distant starport, run across an asteroid belt, and suddenly be accosted by uncouth ruffians hiding behind chunks of rock. When you run into one of these mismatched encounters, it’s best to point your ship somewhere the enemy isn’t and make deft use of your draining deflector shield to protect yourself while you scarper.

Based on the three hours or so I put in to this preview, the game seems rather good at springing interesting, sandbox-y events on pilots who are just cruising around. That could be some drifting cargo (found through activating a pulse on your ship,) a picturesque meteorite field, or an attempt to defend a beleaguered trader which escalates when a nearby pirate with a bounty on his head decides to join in.

The main plot is pretty good at bouncing you back into activities of your own choosing, too. At one point you can’t progress without a tractor beam. You may already have one, but, if not, there isn’t any particular guidance on how to get one. Instead, you’re left to just decide how you fancy raising the (fairly modest) amount of cash to pick one up. Trading, asteroid mining, bounty hunting, or even just flying around attacking random ships and stealing their cargo are all reasonable options.

Rebel Galaxy’s gameplay loop of pursuing further space cowboy antics in order to level up parts of your ship and open up more space cowboy antics is one most will recognise, but the frontier atmosphere and frequent nature of its events and encounters keep the game careening along like a runaway stagecoach. It’s already pretty difficult to imagine any other type music soundtracking my galactic galavanting, and I didn’t even manage to get out of the first sector of space during this preview (a jump-drive was well beyond my financial means.)

There appears to be plenty more to see in the deserts of space, and Rebel Galaxy so far seems like a title that’ll make the prospecting worthwhile.

By Jason Rodriguez59 mins ago
Interviews

By Logan Broadley2 hours ago
Previews

By Martynas Klimas20 hours ago
Previews