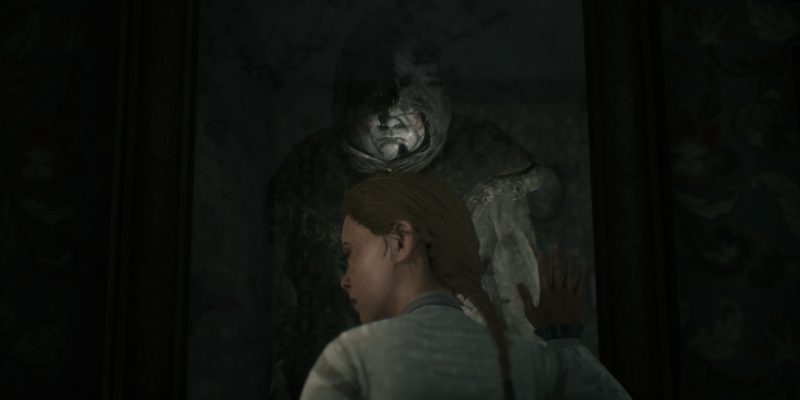 Terrible news. Editor-in-chief and (mostly) benevolent PCI overlord Cam wouldn’t let me write the line “I’ll finish this review when they finish the game” and then call it a day. Sorry, everyone; you’re getting a full Remothered: Broken Porcelain review instead.

It’s hard to quickly indicate just how badly Remothered: Broken Porcelain manages to do basically everything, but I’ll give it a go. The first major bug I hit was in the tutorial, within about one minute of gaining control. A stalker appears, and you’ve hardly had the opportunity to learn how to fend for yourself at this point. He attacked, and the knockback from his swing clipped me into a wall, stopping me from moving and preventing him from attacking me. I had to restart the game. In the tutorial.

The second time around, I was much better prepared for fleeing. During the tutorial, the stalker is relatively slow and there are plenty of areas to evade his grasp. I spent a good few minutes dodging him and looking for a way to escape or incapacitate him before rolling my eyes, giving up, and discovering that it’s a hopeless situation and you’re meant to let him kill you. Great.

The above is basically par for the course in this, the second Remothered game. To be polite (and to understate things), it’s a bit of a mess. To be more blunt, it’s a clusterfuck of Herculean proportions. I can say that I was filled with horror and confusion while playing it, but probably not for the intended reasons. And to put this in perspective, I quite like NightCry, which is infamously broken.

In Broken Porcelain‘s defense, the developer seems pretty dedicated to fixing it. Daily patches have excised some of the more problematic bugs and jarring design decisions (like the left mouse button instantly skipping cutscenes… several of which are immediately after QTEs that demand you mash the left mouse button). I have no doubt more patches are on the horizon, too.

And while we’re talking about stuff it does well, the voice acting is mostly solid. The sound design, barring some audio balance issues, is generally good. The environment is lovely, and there’s a kernel of a good story in here, too! Some of the character beats could even be touching if they were done well. It’s just that, y’know, they’re not. 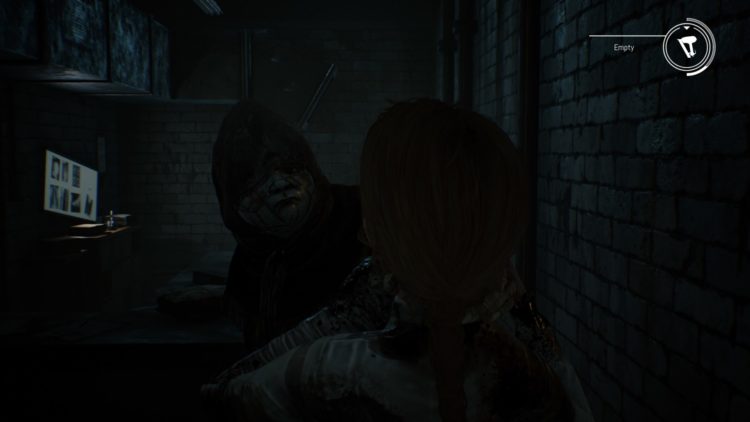 The most horrifying thing: the successful end to the tutorial.

Besides which, at the time of writing, it’s still more bug than game, and a lot of its issues can’t easily be patched out. Believe me, I could spend this entire review talking about bugs. Objectives reappearing in my log after reloading a save. Items disappearing when I drop them. Crawling through a hole and then watching (from an adjacent room) as the stalker attacked the space above the hole until I suddenly died. The run button not actually working during a run-and-hide section until I restarted the game. Enemies stun locking me in a corner. Stalkers losing sight of my character because they stood on a brick. Stalkers being weirdly telepathic. Attacks clipping me into locked rooms, soft-locking the game. Items being placed in such a way that they can’t be taken.

And that’s not all! But we should probably leave it there. Tempted as I was to make this a concept review where I do nothing but list every single problem, that would’ve been brain-melting to read. Almost as brain-melting as some of the non-bug problems, because this game is so underdone that if it were a steak it’d be fucking mooing.

Back to the future and the past and the present

There are much, much bigger problems in Broken Porcelain than the bugs. The premise is this: most of the time you’re playing as Jennifer, a delinquent girl working as a maid at the Ashmann Inn, when spooky stuff starts happening. But you’ll also cut to Reed — the protagonist of the first game — following up on her search for Celeste Felton. 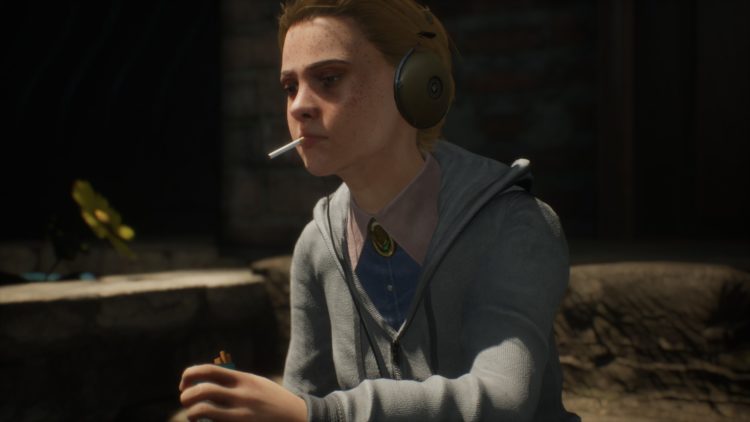 The most horrifying thing: teenage smoking.

However, the plot isn’t just unveiled in two time periods. You also get flashbacks to Jennifer’s earlier days, as well as to the framing device of an old woman recounting the story to someone else much later. And Broken Porcelain likes to swap between these with whiplash-inducing rapidity, inflicting a lot of confusion as to what the hell is going on at any given point in time. This doesn’t help you figure out the ovearching plot, and nor do the sizeable plot holes.

It also doesn’t help that over the course of the game it turns out that about half of the characters are using aliases and/or are related in some way, so you also need to remember some incredibly convoluted family trees and recall who’s claiming to be whom. And this gets so, so much worse in the last third of the game. 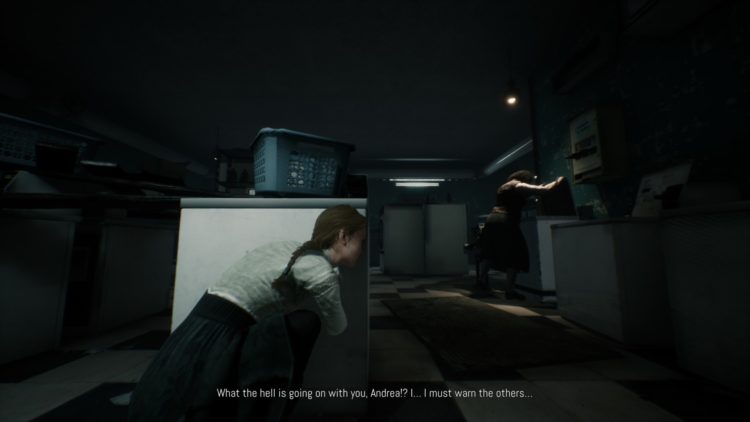 The most horrifying thing: watching someone put their keys in a washing machine for… some reason.

It almost feels like cutscenes near the end are missing as characters appear in locations with no lead-up shots showing how they got there (trudging through the snow and approaching a new area, say). There are some decent twists and revelations, but they’re so dulled by the baffling direction that it’s almost impossible to care. And even before that, twists and events come out of nowhere so suddenly that my “Oh my god, what?” exclamations weren’t out of shock and horror, but bemused confusion. And I can only imagine it’s much worse if you haven’t played Tormented Fathers.

That’s without going into the stuff that’s in incredibly questionable taste and is handled horrifically poorly. Or the absurd and utterly nonsensical plot developments. I’m not going to lie: I have zero idea of the reasoning behind some of the characters acting against their own interests, or some of the ridiculous plot developments. 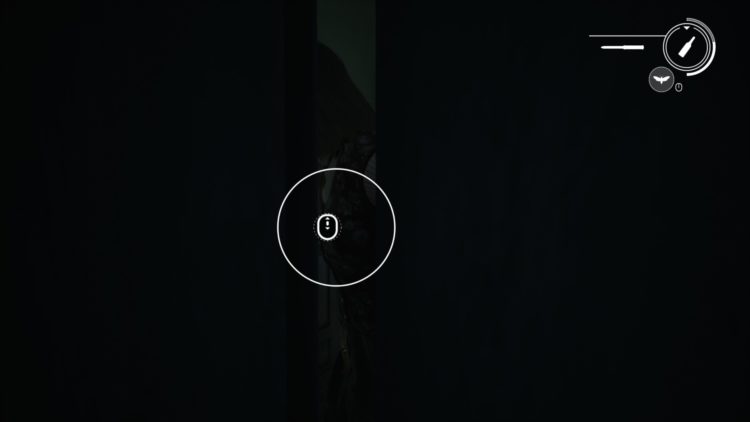 The most horrifying thing: trying to do the bloody hiding minigame using a mouse.

But! Borderline nonsensical plots are par for the course in survival horror games. As long as Broken Porcelain gets its stealth-horror gameplay right — running and hiding from terrifying killers and then sneaking past them — then maybe, just maybe, it’s okay.

Spoiler alert: it does not get this right.

Bizarrely, a large focus of Broken Porcelain isn’t on stealthing past the stalkers, but fighting them. The very first stalker needs to be stabbed in the back a grand total of four times, which is not very scary at all. It mostly means running and hiding, finding a knife and a distraction item, planting the distraction item, hiding, waiting, and knifing them. Then repeating. Three more times. Later stalkers are more environmental, but you’re still usually taking them on rather than running, and not only does that kill a fair bit of the tension, but Broken Porcelain‘s engine doesn’t really feel built for it. 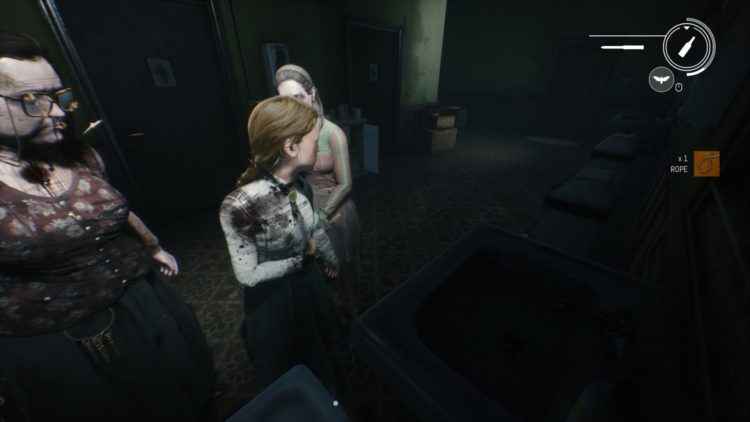 The most horrifying thing: this entire, frustrating segment. And also I guess being trapped against the wall because I can’t push past them from this position.

Broken Porcelain also has a bunch of ideas for mechanics that simply don’t go anywhere. There’s a skill tree, but you could be forgiven for completely missing this because it’s never drawn to your attention and I completely overlooked the first upgrade location. There’s a crafting system (an extension of Tormented Fathers‘ upgrade system) which is arm-wavingly pointless because you lose your items when you transition to a new area or chapter. And with most of the game herding you through small, discrete and semi-linear zones, with almost no puzzles, there’s not much sense of a living world either. Despite almost all of the game taking place in one inn. Tiny, fixed, linear segments rather than a big building to sneak through, and mechanics that do not fit that gameplay style.

There are lots of ideas here, and they could theoretically work in a longer, more fleshed-out game. But this is not that game.

Remothered: Broken Porcelain is an absolute mess, with a huge amount of design decisions that simply do not work. It’s not scary. Sudden plot revelations and dark secrets are dropped so suddenly that they’re either hilarious or seem manipulative, designed purely for shock value, and are frankly disgusting. Characters make unbelievable decisions. Running and hiding isn’t tense, the last third is a mess of plot, and it’s so bug-ridden that I’m still not sure if certain elements in cutscenes are deliberate or accidental. And then there’s that one utterly infuriating section where you need to escape three stalkers in a tiny area, shortly after getting magic moth powers. No, really. 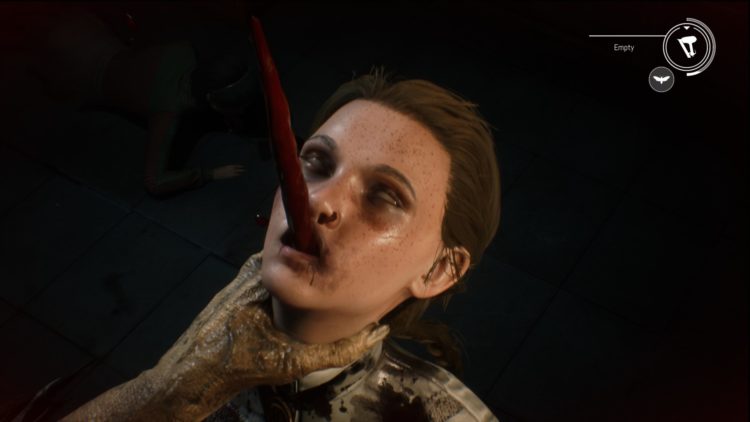 The most horrifying thing: being stabbed through the chest and out the mouth, with a cane made out of a human spine. Yeah, okay, that one’s actually kinda horrifying. But believe me, it’s not even close to some of the horrible, in-poor-taste things that happen in Remothered: Broken Porcelain.

The hiding minigame barely functions and the objectives are frequently misleading (“defeat this person” more than once means “attack them several times and then get hit by them,” but getting hit by them prior to that is death). And the game is a mostly linear trek through… whatever it wants you to do? Well, good fucking luck figuring out a few of the roadblocks it puts in your way. There’s next to zero internal logical consistency in how a lot of things work, and that includes the primary villain.

So, positives. When Remothered: Broken Porcelain is finally patched up, it might be the sort of schlocky, poor taste B-movie horror game for those who enjoy giggling at bad games. But even then, its high price, crucial design flaws, and numerous bad taste decisions would make it hard to recommend. And in its current state? If you see this game coming, don’t try to engage. Hide in a closet and wait it out.

Broken and buggy. Remothered: Broken Porcelain is marred with poor design decisions, a nigh-incomprehensible plot, and a lot of poor taste. In its current state it's barely playable, and it's really not worth the effort.