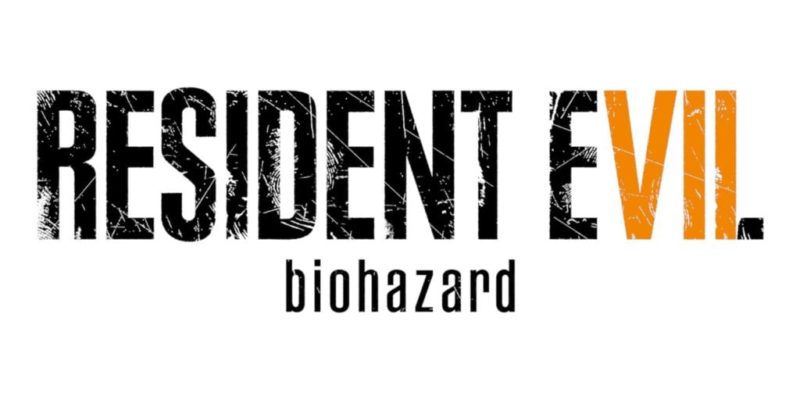 I have spent an awful lot of time trying to work out what the hell Resident Evil 7 (or Resident Evil 7 biohazard to give it its full, weirdly formatted name, which I will never use again) actually is. It’s obviously not an isometric tank-control game like Resi 1 to 3, but neither is it a full-on blast-fest like Resi 4 to 6. Despite what you may have thought from pre-release videos, it’s also not an Outlast-ish stealth horror game. It’s something rather unique.

The best way I can think of pigeonholing it is to say that Resident Evil 7 is what I imagine Resident Evil 1 would’ve been like had it been made today, with no preconceived notions of how the series should be. It’s routinely creepy and has more than a few jumpscares, but it’s also got a fair bit of combat. That combat never feels particularly comfortable, though, because you’re almost always low on ammo and health items, and you’ll have to do a fair bit of inventory management to make sure you’re carrying what you need yet still have room for any other goodies you might find. All of which, I think, sums up both Resident Evil 1 and Resident Evil 7 quite nicely.

Also, you collect weirdly themed keys and solve highly implausible puzzles to continue on, but I think that’s true of almost every survival horror game since Alone in the Dark. It also has a sense of humour about this: “Who builds this shit?” asks the protagonist after a ludicrous shadow puzzle – and later on, you might stumble across a building contract for that very shadow-operated door. A brief bit of levity in something that’s unrelenting gory, grotesque, and dark. 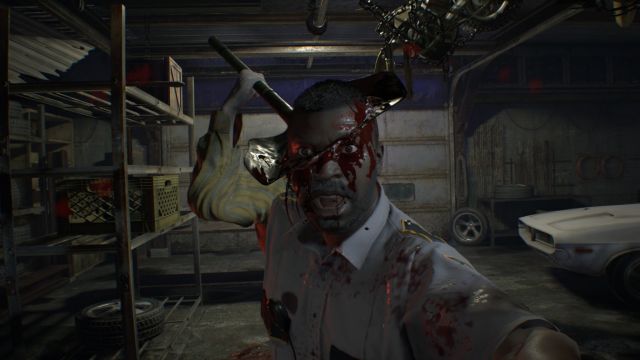 This should set the tone nicely, I think.

Key difference number one is that, while other Resi games tend to cast you as some sort of staggering badass (from world’s-greatest-rookie Leon Kennedy to Chris Redfield, the only man to have smuggled watermelons in his biceps), Resident Evil 7 puts you in the shoes of some random nobody.

Protagonist Ethan’s wife Mia disappeared, and three years later, he receives an email from her asking him to come and get her. Said email leads him to a dilapidated rural estate… and then things go more than a little wrong. Fast-forward a little way past a couple of shocking scenes, and Ethan is desperately fleeing the murderous, nigh-immortal family that live there and really want to introduce him to the horrors within.

This is probably the stuff you’ve seen, but – while the family are your fiercest foes – they’re not particularly common threats. Most of the time they only patrol set areas or will only appear during fixed encounters, and they’re not usually too hard to escape as long as you keep your wits about you. This does absolutely nothing to make Resi 7 less scary. 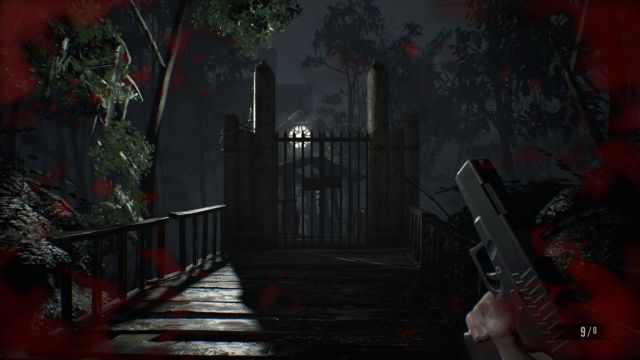 Well, that doesn’t look foreboding at all.

About half of the fear factor is the atmosphere. The rotting house is a seriously eerie place to explore, especially with the excellent use of shadows (I jumped at my own shadow more often than I’d like to admit) and sound design, with all sorts of ambient creaking present to freak you out when you’re exploring somewhere new. It never really made me so scared I had to pause and Alt-Tab away, but it also never left me feeling entirely content to proceed. Thankfully, there’s no battery hunting for your flashlight or anything like that. Ethan apparently knows how to buy a torch with a running time of more than two minutes.

The other half of it is the sheer discomfort the gameplay mechanics create. Finding a room containing a save point and a stockpile of ammunition would be good, if it weren’t for the deep-seated (and usually painfully accurate) sense that things are about to get a bit rough. Beating a boss should be a moment of relief, except that it usually tanks your health and ammo and means you’re going to have to limp carefully through the next section. 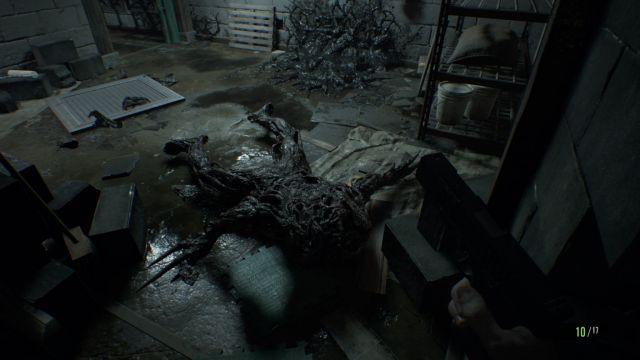 The Molded are your regular enemies (and the only ones you can outright kill with your weapons) but – despite their freaky looks – they stop being particularly unnerving fairly quickly.

It probably says something that, even when you’re armed to the teeth, you still never feel comfortable until pretty much the very end of the game. It doesn’t take too long before you’ve got a bevy of weapons – a shotgun, a flamethrower, a fucking grenade launcher – but you still worry about what’s around the next corner, simply because of how frail you are and how little ammo you have. Yes, you could kill that horrible oozing monster by exploding it with a flame round, but then you’ll have one less flame round for the future. Risk multiple handgun shots to the head while backing off? Maybe try some knife-to-face combat? Good luck.

Backwards movement is slow and ponderous, and in traditional Resi fashion the only in-depth indication of your health is whether the little ECG reading on your wrist (should you have it) is green, yellow, or red. All of this, again, smacks of classic Resident Evil. And no, the game will not pause when you go into your inventory to mix up a healing item.

All of that said, combat is arguably one of the game’s weakest points up until much later, when you can finally cut loose a little and wreak some havoc. The wonderfully satisfying shotguns aside, few of the weapons feel particularly effective against the regular enemies, and there’s very little feedback as to whether or not you’re doing much damage. Enemy design is also a little weak, as there are only about four different types of foe throughout the entire game, and none of them are particularly unique. 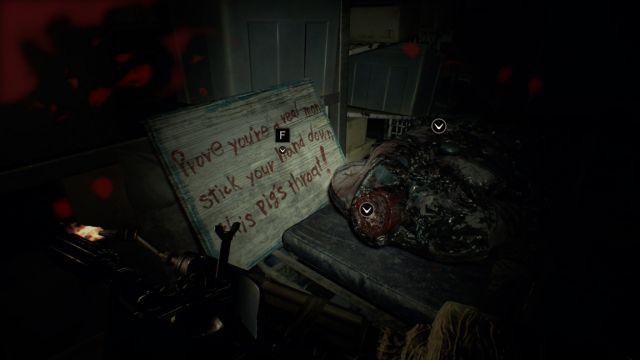 In the end, I reasoned that David Cameron had put worse things down a pig’s throat, so…

Combat isn’t regular enough to become infuriating, though, and actually looking forward to the combat would lessen the horror a little, so – while I’m not convinced this is a deliberate design choice – it turns out it works alright. Desperately pumping round after round into a seemingly implacable foe as it lurches towards you works very, very well to ratchet up the tension of every encounter, and taking on one of the Bakers with weapons is about as effective as fending off the Xenomorph in Alien: Isolation. There are many, many cases where discretion is the better part of valour.

Slightly less fitting are some of the boss battles. The initial ones are clever and manic set-piece encounters, but then things disappointingly amble towards dull bullet sponges. There are some nice ideas present in these, too, but spamming out shotgun rounds and grenade launcher blasts is far less exciting than… well, let’s not spoil too much.

I’m going to say it again, though: that sounds an awful lot like Resident Evil. Maybe not for the best reasons, but hey. 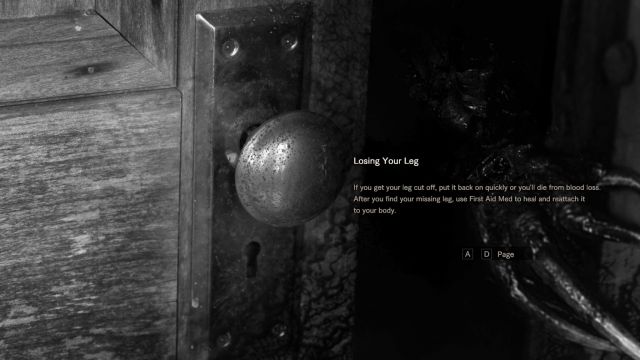 I have no idea if this “tip” is trolling or not. This popped up after a death in which I did lose my leg (and found it as an interactive item) and I did die of blood loss, but it felt a lot more like an extended death scene than anything.

But Resident Evil 7 isn’t content to merely ape its legendary predecessors and adds some devilish twists of its own, of which one of the best is the VHS system. As you explore the Baker House, you’ll come across video tapes recorded by other ill-fated visitors, and these little playable slices tend to have a strong bearing on your immediate future. Some might give you a hint on where to find a key item, but (and I’m very cautious of spoilers here) one of the game’s most beautiful and elegant brain-teasers revolves around a bit of clever thinking based on what you saw in a video. It’s the sort of puzzle I’d expect from a top-tier adventure, and does not involve sliding any bookcases or rotating any statues.

I also like that Resi 7 isn’t just a linear trek through areas, and instead offers up a hub and a fair amount of (interesting) back-tracking. Once you’ve finished the first “area” and gained access to further parts of the estate, you’ll still have left various sections of that first bit unexplored because you lack the items needed to access them. Some of these are entirely optional (and there are a lot of entirely missable secrets tucked away; rushing will leave you far less equipped than you’d think), while others are required for progression. It helps make the estate feel more like a location than a series of corridors and rooms, and I approve greatly. 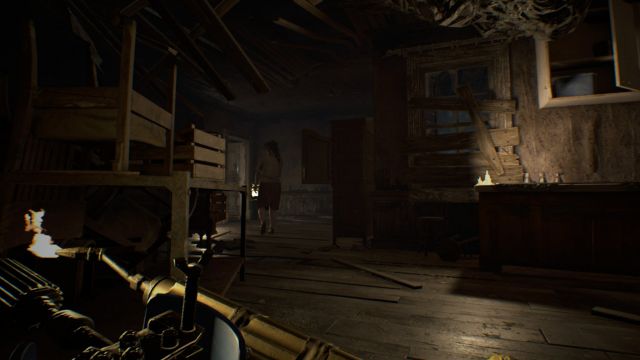 Hiding from and sneaking around the Bakers – and, inevitably, getting jumpscared by the bastards – are easily the most tense moments throughout.

It’s also not a game that overstays its welcome. Depending on how much exploring you do, you can probably expect your first runthrough to be somewhere between the 6-10 hour mark. That might seem a little short, but throughout that time it doesn’t feel like it’s boring or repeating itself; it routinely offers new twists and ideas and feels fresh throughout. I’m hungry for more, but with a sense of satisfaction rather than “What, that’s it?” and I’m planning a second playthrough already.

Another thing that Resident Evil 7 handles wonderfully is in the way it ties into the larger Resident Evil mythos. It’s playable entirely as a stand-alone experience, and for most of the game it feels that way, but pay attention and you’ll see both little call-backs and the ways in which this actually slots into the rest of that fictional world. It does a damn good job of keeping most of this (and, indeed, the mystery of just what the fuck is going on) behind the curtains and merely hinted at for quite some time, though.

On a technical note, I stand by what I wrote earlier. I suffered two crashes during play, which isn’t entirely unexpected when taking lots of high-res screenshots and alt-tabbing regularly. I did also lower the shadow quality to Medium to make the framerate a little more stable, and yes, the inventory is still kind of shit on mouse and keyboard… but that aside, it works wonderfully well on PC. Some slightly rough texture work, but the overall effect is damn bloody good, and it both plays and controls wonderfully. The only thing I might take issue with is that the “use” prompts can be a little finicky, requiring you to stand in very particular places and face a very particular spot to trigger them.

But that’s all boring complain-y stuff, and while Resident Evil 7 has its issues, it’s actually better than I’d hoped. It’s tense and thrilling, varied, well-paced, and seems to be the revitalising shot in the arm the series needed. It’s far from the scariest of games I’ve played (it creeped me out, but I played it at night, for crying out loud) but it’s still a bloody good time.