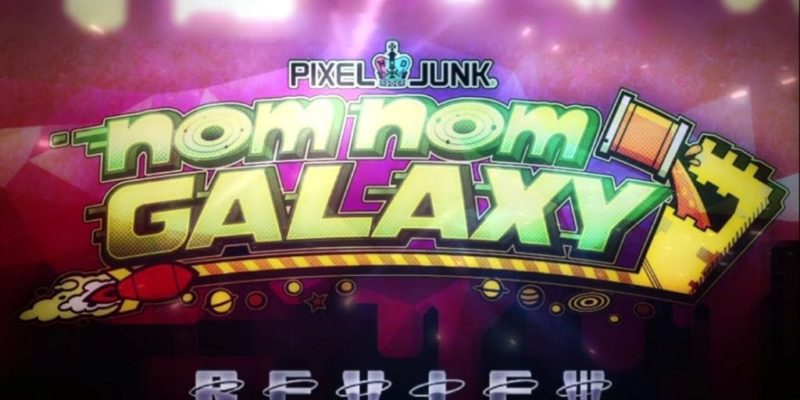 Indie titles are known for being quirky and imaginative, and with their latest title, developer Q-Games further pushes that notion.  With this, they borrowed a few ideas we’ve seen before, but put a  whimsical spin on things.

This is Nom Nom Galaxy: Q-Games’ latest edition to their ‘PixelJunk’ series. This 2D adventure will have you braving alien worlds, hunting for supplies and food, and taking down dangerous creatures all for….building soup factories.

No. I’m not kidding.

In Nom Nom Galaxy, you take on the role of an employee — an employee of a giant soup corporation. Your sole duty is go to off to different planets and explore the area in search of materials to assemble soup factories, and ingredients to create soups, which you then blast off to neighboring worlds filled with hungry customers, all while trying to do it as quickly as you can to steal market-share away from rival soup corporations

On paper, this may sound like the most ridiculous thing ever, and, well, it is. Thankfully, though, playing it is a different story.

Nom Nom Galaxy takes cues from a few titles, and you may even recognize some. It didn’t take me long to be reminded of Image & Form’s SteamWorld Dig, as well as (but to a lesser extent) Re-Logic’s Terraria. The art styles and game play are very similar to each other, however, it doesn’t feel like a blatant copy of either title.

Once you land on a new planet, your immediate objective is to find a suitable spot to build a new factory. In order to accomplish this though, you’ll first need matter, which are blue orbs that are used to construct new objects. It’s found just about everywhere; all you have to do is just have to dig for it. This is where the cues from SteamWorld Dig come in, as you’ll find yourself digging up-down-and-all-around. This is achieved by use of the buzzaw; a handheld electric saw that can cut through soft (green) terrain.

Finding matter is one thing, but constructing your facility is another. Not only do you have to find a suitable spot, but you have to construct it sensibly so that it can be efficient. The amount of matter determines what parts you can buy. They’re all already pre-made, so all you have to do is purchase and place. There are several to choose from: things like corridors, conveyor belts, soup machines, struts, soup rockets, and weapons. Seeing that you’re battling against rival companies, the construction of this needs to happen as fast possible. Once it’s up and running, then it’s time to hunt for soup ingredients. Both plants and creatures can be used as ingredients.

Finding plants is simple enough, but creatures yield more points. However, they’re also a lot harder to get. Each creature has a nest protecting them, so getting just a single creature means you’ll have to attack and defeat it while trying not to sustain too much damage from their remaining family members. There’s only one you; well, you and your fists and buzzaw, at least. Taking down a single creature is no cake walk, though. It can take  several seconds to defeat just one, whilst still trying to avoid its friends. The combat here isn’t tedious, but it does seem to drag on a lot longer than one would hope for.

Once the deed is done though, you can finally bring your ingredients back to the factory, send them into the soup machine to be mixed into a giant can, before popping it in a rocket to be blasted off to your hungry customers. Once that’s done, it’s back off into the wild to get more ingredients.

If only that were your problem…

Given that you’re competing with rival companies, they want to serve as much as much customers as possible, and you’re stopping them from doing that. The solution? Build more factories than you? Harvest the planet’s’ resources before you can? No, and no. How does launching a siege against your factory sound?

That’s right — not only do you have the headache of building and managing your soup factory, but you also have to defend it from occasional attacks  by your rivals. You reach a point where you can outfit your factory with weapons, but early on, you can only rely on your good ol’ fists of fury to get the job done.

Nom Nom Galaxy is one grand mixture of a variety of genres. Real-time strategy fused with action/adventure, tower-defense and a hint of survival. All of these different aspects, combined with cues taken from other titles, make for one interesting dish — just like a good soup (I had to).  For the most part, it works. Because the game is so wacky, it helps keeps things fresh.

You can’t really get bored with this game; there’s too much stuff to keep track of. You’re constantly on your toes searching for resources, and then, out of nowhere, you get an alert that your factory is under attack. This constant back and forth of search and defend will leave you more drained than bored if anything, and that’s a good thing.

Outside of its wacky gameplay, Nom Nom Galaxy also sports an equally entertaining soundtrack as well as colorful, polished, cartoony visuals. This all helps add to the unorthodox atmosphere of the game that takes away all inklets of realism and replaces it with straight up sci-fi weirdness. All-in-all, this makes a great combination.

Much beauty. Such soup.

Nom Nom Galaxy is not your average title. It take inspiration from different titles, and merges different genres all into one, out-of-this world package. It’s colorful, funky, and straight up random — and that’s what makes it work.

When you’re not hunting high and low for more resources to supply your ever-growing soup factory, you’re battling against your rivals who take the phrase “wipe out the competition” a bit too literally.  This constant series of ever-changing events will keep you entertained (and maybe even a bit frustrated) for quite a bit of time in each session.

Combining different elements from different genres sometimes results in a game that’s less than the sum of its parts. There are many games that have tried to do this where it didn’t turn out too well, however, there are a few exceptions and Nom Nom Galaxy is one of them. With familiar cues taken from other titles as well as the mixture of elements from different genres, Q-Games’ latest addition to their PixelJunk series is one unorthodox masterpiece.