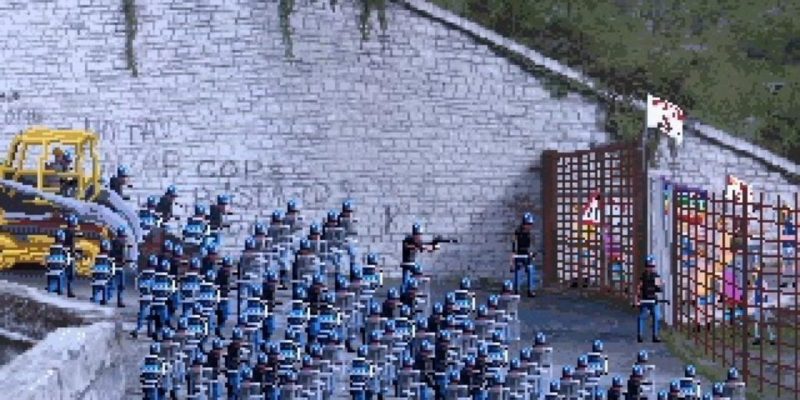 I was a child during the EDSA “People Power” Revolution. It was a peaceful protest in the Philippines which ousted former dictator Ferdinand Marcos in 1986. When I heard of a game which attempts to simulate rioting, protests, and tactical crowd dispersal, I knew I had to check it out. Thinking that Riot: Civil Unrest will provide an exceptionally nuanced look at major upheavals such as the Arab Spring and 15-M/Indignados Movement, I dove right in.

Hours later, I came away with a sense of emptiness. It’s not because of the emotional impact that resonated with me while playing Riot: Civil Unrest. It was because there was no such impact at all. 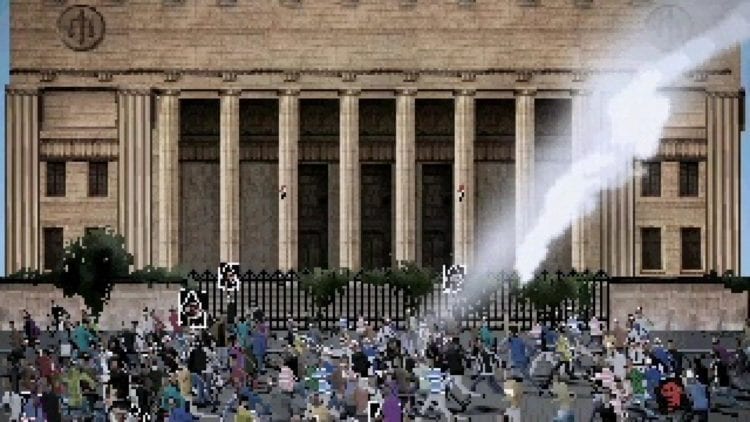 Riot: Civil Unrest is the brainchild of Leonard Menchiari, a developer who experienced first-hand the tumultuous events that transpired during the No TAV protests in Italy a few years ago. Menchiari became curious about inflamed and impassioned emotions in clashes between rioters and police. He decided to capture these factors in a game.

I can, no doubt, tell that Menchiari’s heart is in the right place. Riot: Civil Unrest is, at first glance, a well-meaning look into the often volatile sparks that happen during these incidents. Still, these do not change the fact that the core mechanics are poorly executed.

For instance, I started with the game’s tutorial which offered only a barebones look at the mechanics. Rioters need to occupy areas, switching between peaceful and aggressively violent stances, boosting one another’s morale via “choirs” (or chants), calling in the press for sympathetic coverage, and erecting barricades.

That part of the tutorial lasted around a couple of minutes before my units were driven away by police. The tutorial then automatically switched to a police operation to clear out a building. As the cops, you’ll be able to switch between various formations, arrest instigators, use smoke grenades to clear out areas, or resort to more brutal and overkill methods. Playing as either side will tell you about the public’s opinion on how you handled the demonstrations.

When the police tutorial was done, the game miraculously switched to the rioters’ tutorial again! It was a niggling issue given that the obvious error was present from the get-go. Unfortunately, more would arise as I continued to play. 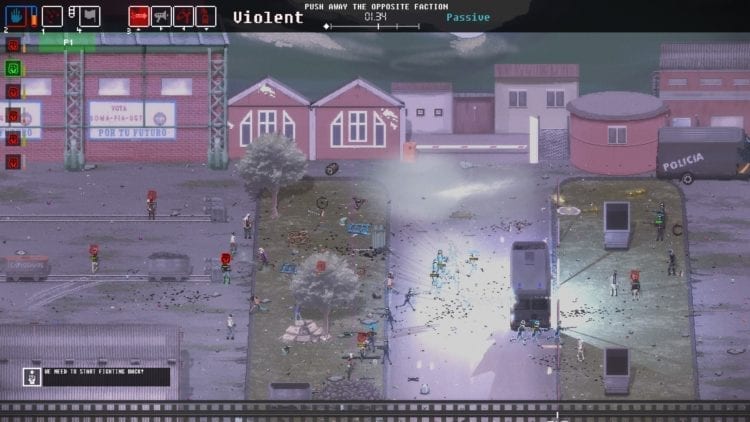 The Pozo Soton chapter of the Indignados campaign.

I started playing the bite-sized campaigns in Riot: Civil Unrest. At the moment there are four — Arab Spring, No TAV, Keratea, and Indignados. All four represent the various incidents that transpired in Egypt, Italy, Greece, and Spain respectively. These are broken down into multiple “days” or chapters that outline how the protests evolved.

The game also wows you with delightful retro pixel art and audio. There are also short montages introducing each major event and their chapters. I cannot fault Menchiari and the IV Productions team for their craftsmanship as these are, perhaps, the most exciting things about Riot: Civil Unrest.

Sadly, all of these fall apart once you start the missions themselves. You’ll realize how clunky everything is laid out. Your rioters and/or police are split into teams. In order to select one, you’d have to click the various pixel people or their groups on the screen. From there, you’ll have to individually right click on where you need them to go. You then separately choose the stances, weapons, or items they’d use.

There’s no waypoint function, no way to select all units or switch to them with a simple binding. The lack of these functions completely took me out of the action. Instead of being enraptured by the moment, it felt as though I was playing a “clicker-type” game. 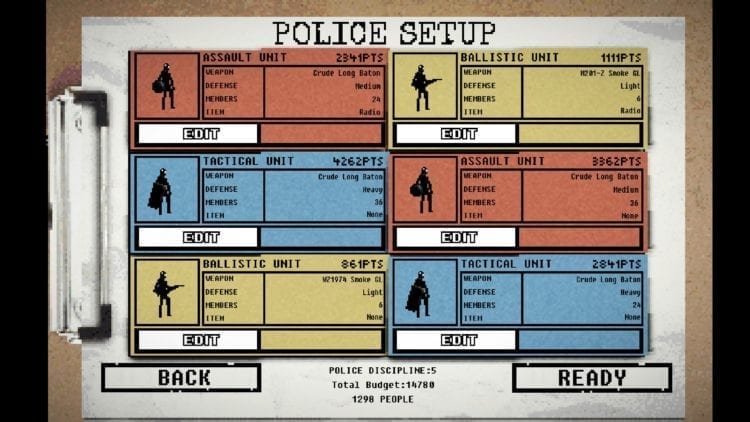 Even the police equipment feels like an afterthought such as giving you the choice of multiple batons… without really telling you if there are any differences.

Unintuitive interface aside, Riot: Civil Unrest is also prone to strange pathing issues. During the final day/chapter of the Indignados campaign, I found myself in control of six mobs. Well, they were more like squads, though I must admit I had no idea what their #squadgoals were. Everyone was running back and forth. Rockets were missing their targets. One of my rioters was shot, only to stand back up later allowing me to throw a Molotov cocktail. Four cops were dilly-dallying in the middle of the area with rioters just standing beside them. If this was a typical food fight in a movie, it’d be messy and unentertaining at the same time. Oh, and I also won that mission even though a tiny notification told me that the police had the upper hand.

In the second No TAV mission, the police objective was to prevent rioters from entering the construction area. I simply placed them in a straight line to block the entrances. A couple of protesters who made it past even tried to move back to their original spawn. They ended up getting stuck in the middle of a police formation. Once my units were deployed in a straight line, I just waited and did nothing for the next few minutes, eventually “winning” the mission.

Then, in the succeeding chapter, I had to disperse rioters away from a green circle (the objective). Everytime I pushed a small mob away, some would miraculously pass through my phalanx. I’d backtrack to push them off, or they’d simply get stuck in one of the corners.

Riot: Civil Unrest can be easy or challenging. This is depending on the difficulty you set for yourself or the equipment that you choose to bring prior to each mission. However, it’s never “fun” (and the term itself probably doesn’t seem apt in a game about protests, but cést la vie). 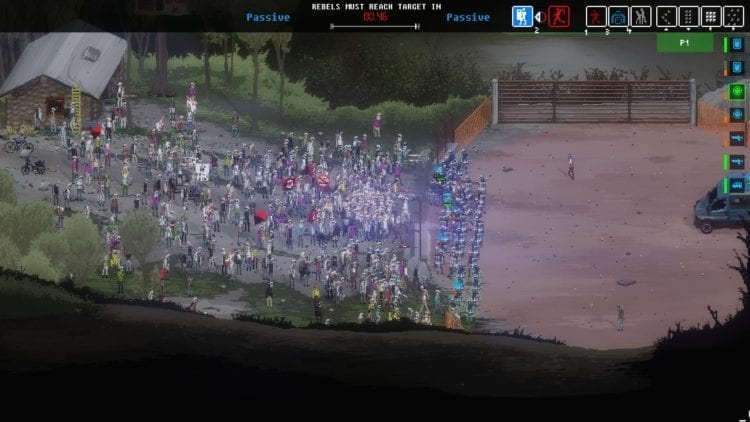 I formed a line, left the game, and came back to see that I had won. Also, two of those stray protesters will get stuck in the middle of cops.

I also checked out Riot: Civil Unrest’s “Global Mode.” It was supposed to be a continuously evolving campaign that takes into account the results of previous missions. To my surprise, I found out that I was just replaying the same missions from the previous story modes I had already completed. That chapter where I was simply waiting at the construction site until the clock ran out and I won? Well, that was there too. This time, though, I came prepared. I left my computer to make coffee and came back to a “you won” message.

I also checked out the other “modes,” and I use the term loosely. There’s a custom mission editor which allows you to design your own riots. Knowing that there’s another EDSA “People Power” Anniversary being held this month, I decided to upload a background. It did not work and the editor just kept opening the image on Windows. I then decided to add new assets like trees, destructible objects, rebels, police, and objectives. I clicked on “test” and, surprise, nothing happened. The feature itself, though only a beta, doesn’t even tell you if there are any errors preventing you from testing the level.

Another side attraction, “Journalist Mode,” lets you take photos of civilian and cop clashes. You’ll see the amount of “dollars” each picture is worth. When the timer runs out, that’s it. The mode is just there for some reason, with no meaningful or engaging results.

End results are, essentially, another shortcoming of Riot: Civil Unrest. They pigeonhole you into committing certain actions to “win” the game. A conclusion where “civilians peacefully protested, police kept order, and everyone went home without injuries” was, somehow, a “loss.” 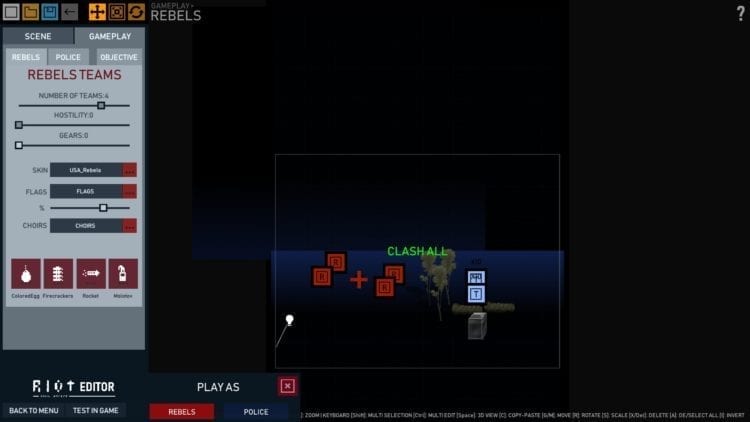 The map editor doesn’t seem to be functioning at all even though it’s almost time for the official release. It also doesn’t tell you if there are errors.

Riot: Civil Unrest tries to simulate disorderly events that historically transpired. It provides the illusion that you can make your own choices, even though they’d lead to an expected outcome. It didn’t matter that I was taking a number of casualties because the pixel people, interface/controls, and pathing kept me detached from the human element of these events. You’re only focusing on “victory” by staying in a circle or moving to the other end of the map.

Riot: Civil Unrest has interesting concepts on paper. Unfortunately, in terms of practical application, it’s a rudimentary depiction of complex events, lacking in the nuance that it attempts to portray.

Riot: Civil Unrest attempts to depict complex socio-political upheavals in an extremely unengaging and unintuitive manner, to the point that these events lose their impact in video game form.

Contest: Win A PC Copy Of Genesis Alpha One