There are new football games every single year, but rugby is a sport that’s been hit and miss when transferred to the world of videogames. There’s a simple reason for this; it’s a complex game with so many intricate rules that bringing all of the different elements of the sport to a game is not easy.

Mapping those rules to game mechanics give you so many things to consider. How can you control a ruck or maul? How should scrums work? Can knock-ons work realistically in a simulated environment with AI? I would probably run a mile if I were asked to develop a new rugby game. When you know the rules it’s straightforward enough, but try and transfer all those actions to a controller and it’s not at all easy.

EA had a couple of cracks at bringing the great sport of rugby to gamers, but with mixed results. Those titles were also developed by HB Studio, the developers behind Rugby 15. HB also developed Rugby World Cup 2011. The other studio who loves their rugby is Sidhe, who created the most recent Rugby Challenge releases. These received a reasonable reception from fans, but so far neither developer has managed to create a superb rugby game of peak-era FIFA quality. Can HB Studios revitalise the game of rugby as a videogame? Let’s scrum down and find out. 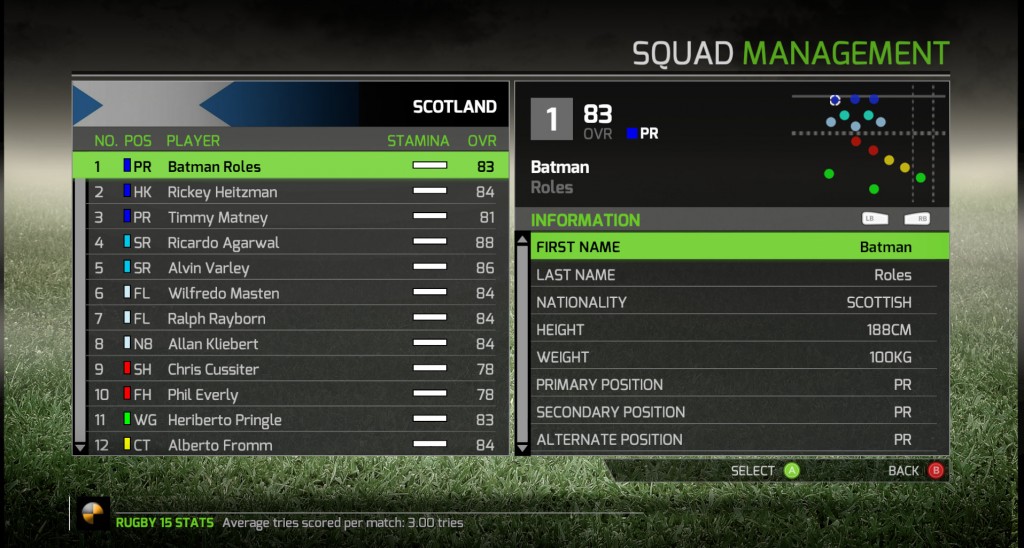 The question most fans will want an answer to is whether or not this game comes with all the proper leagues, players and licenses. The good news is that the Aviva Premiership,Top 14, Pro D2, Southern 15, and the Pro12 are all included. There are even the real players from the regional teams. That’s a good start with the licenses in the bag.

Also included are internationals such as the 6 Nations and 4 Nations but the player names in those are all fictional. To get around the problem of weird player names, they can be painstakingly edited to the real ones – if you can be bothered to look through all the latest team sheets for all the rugby nations. Still, at least you can leave out all the players you can’t stand in real life from your international squad, or give them creative titles like Mr. Tosser.

Here’s something important PC gamers should know: this game has to be played on a controller. That’s probably not a huge surprise as it would be quite hard to have complete control in this kind of sports title with a keyboard/mouse config. But we’ll never know because that option isn’t even there. The lack of any keyboard controls initially proved a problem for me as I didn’t have wired 360 controller to hook up, so it involved a bit of messing about to get the PS3 controller working. That’s not the game’s fault but there are zero options to play this with a keyboard. So be warned if you’re controller-less.

Getting a match up and running is simple enough with options for quick friendlies, the different international tournaments (mentioned above,) and custom tournaments too. The developers have thought carefully about what players would likely want to see so there’s plenty of choice and I have no complaints about the competition selections. Looking in the options screen, the game can be viewed side-on or end-on, but playing from behind your team causes the camera to do a weird 180 swing around as possession switches between sides. As it swings the action pauses momentarily and it’s a bit weird. 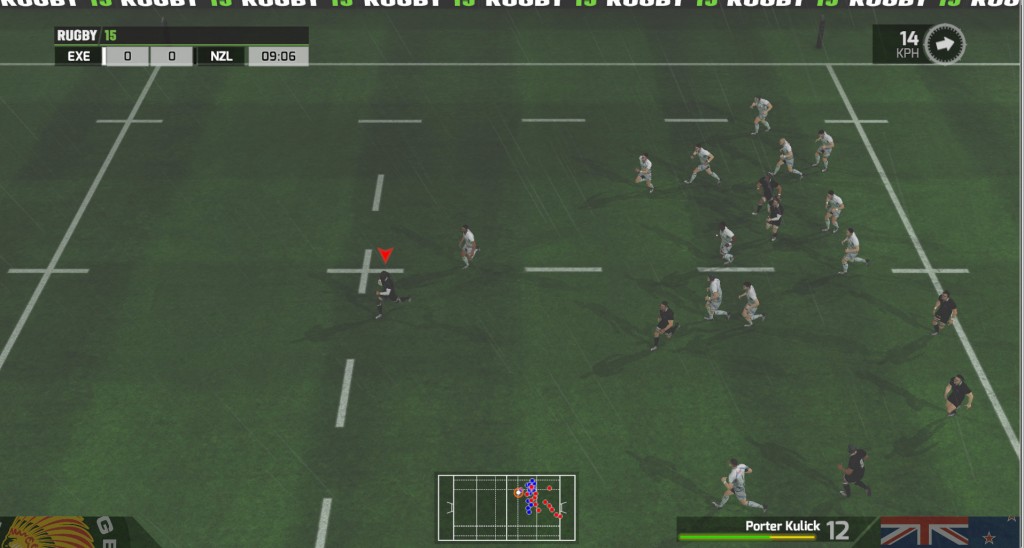 Pitch is looking a little washed out and it always seems to be muddy.

The big question though, is how does Rugby 15 play? This is where things start to go a little downhill. The game is mainly controlled with the thumbsticks, left for movement and right for the passing direction. The right button and trigger are the second most important controls, these activate a pass, lineout jumping and turnovers. Put it this way, there’s a lot of stick waggling no matter where you are on the pitch.

Overall this works reasonably well, but sometime weird things happen such as passes going the wrong way (or even upwards) which is really annoying. Sometimes this is because there are no other player in the pass radius, in which case the ball just goes flying in the other direction instead of the direction you would have intended it go regardless of whether a team mate is there to receive it or not.

HB has tried to capture the nuance of the game, while at the same time keep the gameplay flowing, and I think they may have overstretched things somewhat. There’s the ability to spin out of tackles, hand-off tackling players, and undertake dive tackles but these are hit and miss as to whether they actually happen with the correct stick movement.  I know this can sometime be down to human error but a lot of the time it really just doesn’t happen as it should.

One of the main irritations are the rucks. It’s actually quite easy to turn the ball over with some solid stick waggling but the most annoying control problem is the right trigger in a ruck where you can get so easily penalised for handling. If I hear Stuart Barnes’ commentary that my “foot shouldn’t have been there” one more time, I’ll scream. Also, receiving red cards for stupid infringements is just frustrating when you have so little control or can’t see the action properly because the camera view is so far out.

The rucks, mauls and scrums are mini games in themselves with the player having to waggle the stick or push a button to haul in more players in order to get the weight advantage. Problem is, it’s really inconsistent. Sometimes its just too easy to get turnovers in a situation where it would never have happened in a real game. 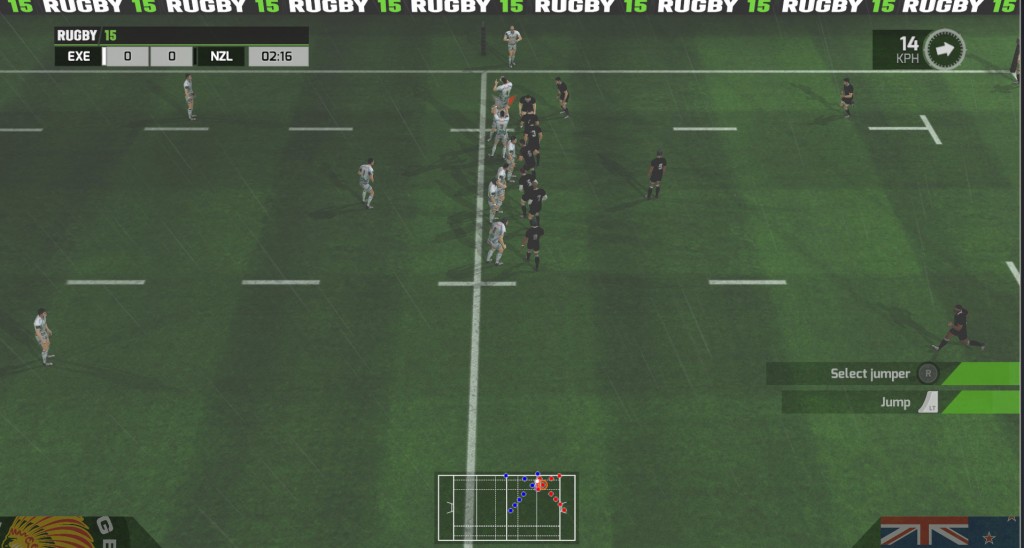 Throws are always straight so just contest if you can.

As an example of how Rugby 15 feels flawed, it you catch the ball in the 22 and run backwards towards your own try line and then go around in a U shape it opens up a world of unlikely opportunities. As the opposition advance towards your player in bemusement, you can just run around the opposing winger with a back and fly in for an easy try. This is how I managed to get the Exeter Chiefs to beat the All Blacks. Yes, the All Blacks. They are now officially crap and should be dropped at least ten places in the world rankings.

HB has tried to include as many options as possible such as offensive and defensive positioning of the backs, which can be controlled by with the D-Pad, and this works reasonably well. The goal kicking is also not bad with the left stick controlling the direction of the player when facing the posts and the right stick controlling the amount of swing and direction of contact by pushing the stick forwards. It’s features like this which make you wish the game was the complete package. Kicking options are also reasonable, even if the ball doesn’t always go in the direction you intended.

For years I’ve had to write stories about new football games such as PES and FIFA and talk about how they are starting to look more realistic and I really wish I could say the same about rugby games. Rugby 2015 is not going to win any awards for visuals because it looks like it comes from about five or six years ago.

Now I get that HB are no EA when it comes to funding, but in 2014 I would have expected something better. There are no player close-ups or cutaways when starting a game or even scoring a try; though, looking at the player models, this may actually be a good thing. The game just looks washed out, and the stadium, yes I say “stadium” because as far as I can tell there is only one, looks like some rickety shack. From what I understand HB wanted to concentrate more on the gameplay than creating a fantastic looking rugby game but it’s so disappointing that there’s been no real love whatsoever been poured into the visuals.

Stuart Barnes has been recruited for the commentary, but this is at best uninspiring and at times just laughable as Barnes pipes in with comments at exactly the wrong points in the action. Sadly, Bill McLaren retired, so it’s not easy finding a rugby commentator with some real charisma these days. Brian Moore would have least been a better choice with his sometimes outlandish comments. 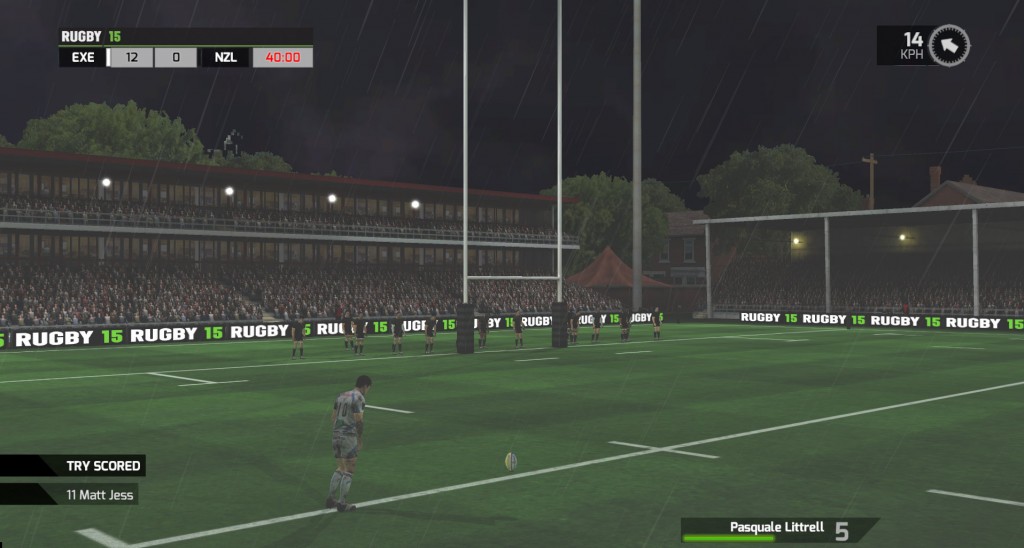 Before I forget, if you were wondering about any kind of multiplayer options: there aren’t any. In this day and age that’s another huge disappointment, because it might have added a little more fun to the proceedings.

In a nut shell Rugby 15 could have been a decent game but there’s obviously been a lack of cash, or time, to develop the title to its full potential. Better visuals and a control system that acts a little more refined would have gone long way. HB obviously understand the great game but have failed to polish a videogame version.

Perhaps in the future they can take this foundation and iterate on it, but really they should have held off and released a more polished version. This is not going to endear fans to their rugby brand and any engagement with the game doesn’t last all that long long. Rugby 15 also has a tendency to lock up mid-match, which is not a good sign.

Priced at £31.49 it’s a big ask to expect rugby fans to part with that amount of money for a game that falls this far short. Perhaps it might be worth a punt at around a tenner (see what I did there?), but, for now at least, rugby fans are going to have to continue waiting for a game that lives up to those of their footy rivals.

Tales from the Borderlands trailer chats with Gearbox