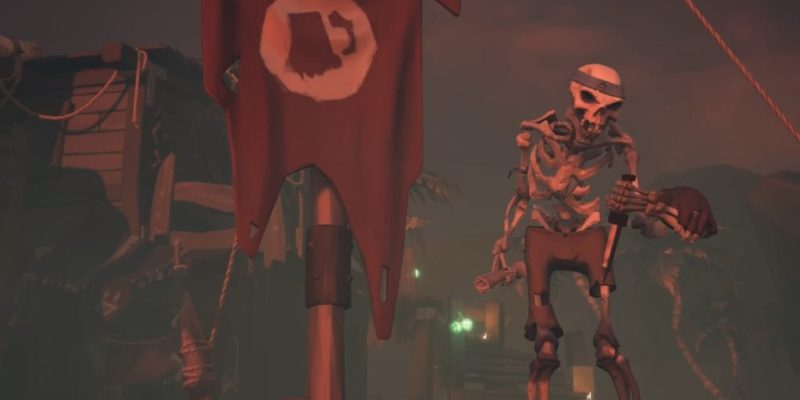 Skeleton crews and undead captains are coming to Sea of Thieves later this month. They’re part of the Cursed Sails update, a free expansion set to launch on July 31.

With the launch of Cursed Sails, there’s no guarantee that other players man ships on the horizon. The update introduces skeletal vessels. These ships carry an undead crew, and they’re hungry for battle despite lacking any organs.

Battling skeletons on Sea of Thieves‘ islands is rather straightforward. Taking on a crew of cursed corpses at sea sounds a bit more difficult. Fortunately, Cursed Sails introduces the Brigatine, a ship geared for trios. The Brigantine has most of the Sloop’s maneuverability but is a bit more spacious like the Galleon. Based off of Rare’s limited description, it sounds as though the Brigantine can be an extremely useful ship if manned by the right crew.

Including an alliance system is a smart move. Sea of Thieves‘ pirate-themed gameplay leads to an aggressive player base. Crews tend to approach any ship they see as a threat, and it’s all too common for players to open fire on one another for merely sailing too close. With skeleton ships lurking about, I’m hopeful that Cursed Sails‘ alliance system makes players want to cooperate across crew boundaries. Skeletons are the real enemy, after all.

Lore-hungry pirates aren’t being ignored in Cursed Sails, either. The announcement’s update teases that “things are afoot with Sea of Thieves‘ ever-competitive shopkeepers.” What that means remains to be seen, but Rare insists that it’s “a tale of ambition and greed escalating into something truly terrible.” Skeletons sailing the high seas once more sounds terrible to me, so maybe the lore content has something to do with the new undead ships.

There’s no way to know until Cursed Sails releases on July 31. Based off of Rare’s overview, the upcoming expansion has a lot that could entice players who dropped Sea of Thieves following its March launch. While Sea of Thieves was always a goofy pirate sandbox, it struggled to find a direction post-player shenanigans. Introducing more PvE content, as well as ways for players to team up is a solid move in the right direction. Here’s hoping it all works out. My crew could use some more booty.

Call of Cthulhu will make you question reality this October

By Matthew Loffhagen32 mins ago
News