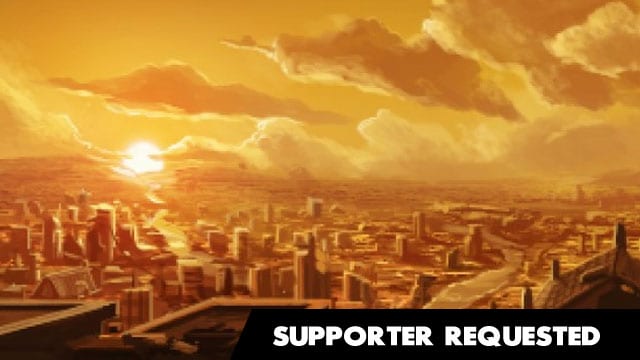 I have a soft spot for Wadjet Eye’s releases. Some – Technobabylon, Gemini Rue, the Blackwell series – are spectacular adventures in their own right. Others are more like an old sweater; they’re unlikely to garner a huge amount of praise from those who see them, but they’re just so comfortable and snug that you really don’t care that they’re a little threadbare in places.

Shardlight falls into the latter category. It has quite a few problems, but I can’t say any of them made the experience unenjoyable. So, fair warning: I’m going to be damning with faint praise throughout this and complaining quite a lot, but for all of that, I had quite a good time with Shardlight. If you’re itching for another AGS adventure in the usual Wadjet Eye style, I suspect this’ll fit the bill quite nicely.

Amy has a nice line in sarcasm.

Shardlight‘s protagonist, Amy Wellard, is a mechanic struggling to make ends meet in a post-apocalyptic world that has less of a class divide and more of a class chasm. The rich live in relative luxury. The poor scramble to survive, and are at the mercy of a lethal disease called Green Lung. Contract it, and your only hope is to win a vaccine in the “Vaccine Lottery”, with tickets awarded for completing particularly dangerous jobs for the ruling Aristocracy. Otherwise, you’re going to get shipped off to the Quarantine Zone to die. Of course, the rich have the vaccine available on request…

Mix in a cult of eerily cheery death worshippers, superstitions surrounding red-eyed ravens heralding the personification of Death, an underground rebellion, and an awful lot of bombed out buildings, and you’ve got Shardlight‘s bleak but quirky little world – although one that certainly doesn’t lack for humour or humanity.

The Reaper cult are actually quite friendly. And they all have top hats, which is a plus in my book.

Shardlight opens with Amy on one such vaccine job, having recently contracted Green Lung. As you probably expect, things get a little more complicated when she falls into the lap of the rebel group planning an uprising against the Aristocracy, and winds up as a double (or triple) agent working for every side at once. And, happily, which one you eventually choose is pretty much up to you.

This is one of the many nice little touches in Shardlight. While the game is largely told from the perspective of the downtrodden masses, the Aristocracy aren’t exactly generically evil, and the primary antagonist (voiced by Wadjet Eye regular Abe Goldfarb) generally has at least somewhat understandable reasons. Hell, said antagonist isn’t even entirely unpleasant. Conversely, while a revolution might wind up being for the best, its leader is a hothead who doesn’t really care about how much blood gets spilled… etc. The world is drawn is shades of grey.

Unfortunately, not a great deal is made of this in the long run. It’s hard to feel much sympathy for a lot of these characters, and although these things certainly impact what decisions you’ll make at the end of the game, even that has a clear “best” option, which does a little bit of a disservice to the murky morality throughout.

The Aristocracy are generally creepy, though.

We’re getting a little ahead of ourselves talking about MULTIPLE ENDINGS and so on, but it does bring up one point that’s worth discussing, and that’s the writing. As the last couple of paragraphs probably imply, it’s generally pretty good! For the most part, Amy is likeable, as are most of the incidental cast members. The characters that act as catalysts for the plot aren’t really entirely angelic or entirely evil, and I’m not going to complain that the extras who have three lines don’t have depth or nuance because that would be silly.

Still, as the last couple of paragraphs also imply, not a huge amount is really done with this. The characters are there, but they don’t change a great deal over the course of the game, nor do they really “do” much. Amy is about the only one with a character arc, and even she has some jarring shifts in personality as the game goes on. There are a few really tantalising characters who you expect to be major players, but who turn out to just be a personality there for the sake of the plot – which, in at least one case, doesn’t make a great deal of sense.

As an example, there’s a lady living in a train, and I’m sure there’s a fascinating story behind who she is, and why she’s in the train, and how the train got to where it is, and so on. But unless I missed something, it’s never addressed. This is not the only time when you get the sense there’s an interesting backstory tucked away somewhere – and maybe there is, and I missed it, but I’m pretty sure I explored quite thoroughly.

Nonetheless, I’m having a hard time actually complaining about this. With one slightly spoiler-y exception, I actually enjoyed pretty much all of the characters, and a faint tang of disappointment that they didn’t get to do more doesn’t really spoil that.

And yes, the voice acting is solid. It’s filled with Wadjet Eye regulars, so if you’ve played pretty much any other game by this particular publisher, you’ll have heard at least a few of these voices before and you’ll know what to expect.

Just try to tell me this isn’t one of the nicest backgrounds you’ve seen.

It’s also a really, really beautiful game – possibly one of the best-looking AGS games I can think of, off-hand. I’m not a big fan of post-apocalyptic brown and that got a little wearing by the end, but the background art is spectacular, and so too are pretty much all of the character portraits and sprites.

But wait, I can complain about this too! … although only slightly. If there’s one issue with the eye-smoochingly sumptuous backgrounds, it’s that there’s no Show Hotspots key that I’m aware of (which may be a limitation with AGS; I honestly can’t remember) and this means that puzzle-relevant clickables are occasionally pretty well hidden. It’s not something that happens a lot, so let’s go with another example: I took way too long to find the bell in the screenshot below.

My eyes are pretty much automatically drawn to it now. Sigh.

Yeah, you probably spotted it quite quickly, but bear in mind that this is a scrolling screen with more to the left and to the right (with, again, some of the nicest scrolling I’ve seen in AGS in awhile, and NPCs meandering along) and that aside, there are two other areas it could’ve been in.

Which leads us neatly onto the final piece of the puzzle: the… uh, the puzzles. Which, again, are a bit of a mixed bag. You saw that coming, didn’t you?

A couple of them are, genuinely, excellent. An early chalkboard puzzle is potentially going to become infamous, and I suspect it’ll be the major stopping point for a fair few people early on (and I smacked my head against it for quite some time) but in hindsight it’s actually fairly logical and a lot simpler than I first thought – to the extent that I’m slightly embarrassed to be writing these words, because I’m worried everyone else is going to go “What? That was easy.” Simplicity in hindsight tends to be one of the hallmarks of a good puzzle, and there are a couple of other really decent ones scattered around the game’s four-to-five hour length. Possibly longer, possibly shorter, depending on how much trouble you have with puzzles.

This is… not one of the harder puzzles, exactly.

A lot of the other puzzles, though, not so much. At one point the game repeatedly asks you to “use the crossbow to shoot a thing that’s out of reach”, and indeed, that seems to be Shardlight‘s “we can’t think of a puzzle” card.

Sometimes, it’s entirely logical and fine. Other times, the fact that the button to open a door is placed five feet above the door is slightly ridiculous. And I’m not sure how Amy got to be such a crack shot with the crossbow, but again, that’s one of those things that I feel must be explained somewhere, but I missed it.

Even when it’s not doing that, Shardlight regularly misses the opportunity for a cunning puzzle, or shifts into the territory of making things really obvious. If there’s some rubble in your way and a crowbar on the floor next to it, that’s not really a puzzle, and it’s a pretty ham-fisted way of making sure you have the crowbar in your inventory for a future puzzle. Another section has Amy trying to assemble a disguise, which… involves opening every locker in the room (using an item that’s heavily signposted in the related dialogue) and picking up a pair of shoes. Which, again, is not really a puzzle, and I can’t help but feel that more could’ve been done with this. Memories of Broken Sword 5‘s hilarious (albeit simple) makeup puzzle sprang almost immediately to mind.

Thinking about it, that basically sums up my thoughts on Shardlight. I like it quite a lot, but there are so many little areas where it feels like more could’ve been done.

Like I said at the start: it’s comfortable, and cosy, and pleasant. Shardlight isn’t the most impressive Wadjet Eye title, nor is it a spectacular adventure game, but it’s nonetheless an enjoyable experience with more going for it than you might think, and if you want another solid AGS adventure then it’s unlikely to leave you disappointed. It’s just that for everything it gets absolutely spot on, something else feels like a missed opportunity, and when the credits rolled I felt a little bit unfulfilled.