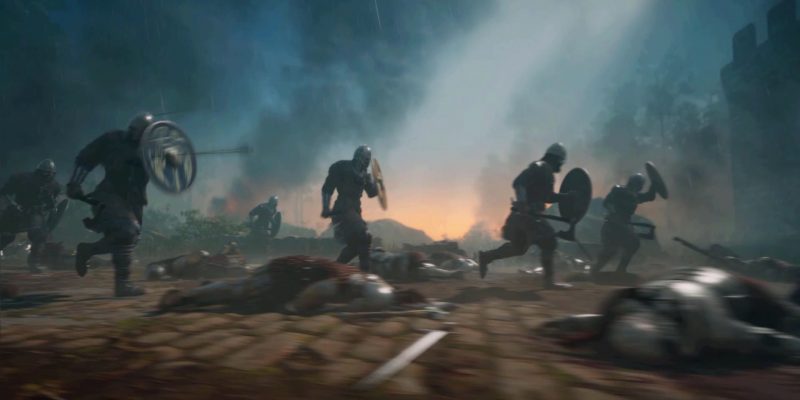 Siege Survival: Gloria Victis is an offshoot of Gloria Victis, an MMORPG that released back in 2016 (it’s actually still in Early Access today). In this spinoff, you take control of hapless civilians inside a besieged castle. You’ll use various tools at your disposal, craft items, scavenge for supplies, and see to the needs of the bastion’s defenders.

For the Siege: Survival: Gloria Victis preview build, only one scenario called “Edring’s Last Stand” was available. I noticed several flashes of inspiration, and some mechanics even reminded me of other survival titles like This War of Mine. Unfortunately, there were also several noticeable flaws that made my playthrough a little tedious and frustrating.

Once you start the Edring’s Last Stand scenario in Siege Survival: Gloria Victis, a short cinematic plays. Soldiers lay dead as a hostile army advances. The force’s commander then executes a wounded man who’s trying to make his way back to safety.

The perspective then switches to Flint, one of the survivors inside the keep. You’ll then need to speak with another civilian, Bertram, to console him. Afterwards, Flint will need to do a bit of preparation such as removing debris, making a bed, and constructing fixtures needed for crafting.  Like other games with survival and crafting mechanics, your tasks will take a bit of time to get completed.

Eventually, the day gives way to night. You’ll see this denoted by the “clock” at the upper-right corner of the HUD. Once the sun’s gone down, all your tasks in the castle will be paused. For nighttime activities, characters can either rest, scout to reveal enemy intel, or scavenge for supplies. If you decide to scavenge for supplies, your character will spawn on a default location in town. From there, you can search nooks and crannies for wood, fiber, vegetables, water, meat, and other materials. Your survivor moves very slowly, but you can double-click on a spot to run. You may also speed up the searching animation. Doing these things will generate a lot of noise, so you better be wary of guards.

There are several hiding places in town and, to a certain degree, it’s actually easy to fool the clumsy guard AI. However, if they do spot you and you can’t get them off your tail, you better make a break for it. Guards can attack you with their swords or fire crossbows at you. Although it’s possible for characters to get wounded, I actually haven’t seen them die in combat yet.

In any case, whether or not you were spotted, you’ll really need to get back to the castle once dawn breaks. Think of this as your time limit for nighttime scavenging. As you progress and explore in Siege Survival: Gloria Victis, you’ll eventually stumble upon new passageways that lead to additional spawn locations while scavenging. Likewise, some obstacles can only be destroyed after you’ve created a shovel or a torch. Moreover, there are certain events and dilemmas that you’ll face.

For instance, Bertram, the second character you meet after Flint, will join you on the second day of your adventure after interacting with him. Later, an event may trigger as you enter a ruined house. Inside, a woman is getting attacked, and you can either fight the ruffians or push a wall to bury them.

In my case, I chose the first option. Little did I know that this would cause the bad guys to kill the woman and wound my character. When I reloaded my save (more on saves in a while), I chose to have the wall collapse on them. This led to meeting another civilian, Rena, whom I happily recruited to my castle. Whether you have one or half a dozen characters, Siege Survival: Gloria Victis requires you to take care of their needs. This means constructing a bed so that they can rest somewhere other than the ground, cooking meals to keep them fed, and so on.

The more characters you have, the more tasks you can undertake since different characters can handle the fixtures that you build. However, this also means you’ll need more basic resources lest your survivors get hungry and thirsty. Likewise, you’ll need to make medicine and bandages in case of diseases and wounds. It’s possible to get sick if your character’s working in the rain or if they go near noxious fumes (i.e., diseased corpses in the village). As for wounds, you receive them if guards hit your survivors or if rocks drop down on their heads. Yes, there are days when the enemy will lob stones inside the castle using catapults. On other days, the enemy pelts the base with fire arrows which can lead to workbenches and other implements getting scorched. That means dousing the flames and repairing stuff quickly.

In a way, it’s possible to put up a stalwart defense. To do this, you provide supplies like bandages, meals, repaired weapons, arrows, and rocks to the soldiers at the bastion. Should the enemy attack, their forces might get repelled. Although Siege Survival: Gloria Victis has several interesting mechanics, I still noticed a few clunky concepts in the preview build. For one thing, the game’s save system needs to be addressed. Similar to This War of Mine, Siege Survival: Gloria Victis autosaves during the day and reloading brings you back to the start of that day. It’s one of my pet peeves since you end up having to redo your tasks and actions. Also, some crafting actions take too long. It’s actually possible to waste an entire day just waiting for certain items like tools to get finished. Another related issue is how the objectives for the entire scenario don’t get laid out in full.

To give you a more detailed example, I followed the tasks each day and, at the time, I thought I was ahead of the curve. I even made some extra resources for my characters and the soldiers manning the bastion. Then, around day eight, I was told that I needed to upgrade my workbench so I could craft a shovel. Unfortunately, I didn’t have enough resources for the upgrade and, worse, a couple of the areas in the village were already stripped bare. Since the loot doesn’t respawn, I decided to construct a dryer that would allow me to create a particular item (fiber).

Well, as it turned out, waiting for fiber to get made is akin to watching paint dry. After roughly two days the progress bar still hadn’t reached 40%. When that happened, I checked the game’s save folder to delete several files (i.e., the later days) just so I could reload an earlier state. Yes, an hour or so wasted and another hour to redo the same old stuff. Needless to say, I was disappointed.

I’m hoping that certain mishaps will be ironed out in time for Siege Survival: Gloria Victis‘ Q2 2021 release. It has an interesting premise, but your experience could get marred by frustrating moments. In any case, if you find the game intriguing, you can check it out via its Steam store page. How to play the message at a Guardian Outpost in Fortnite