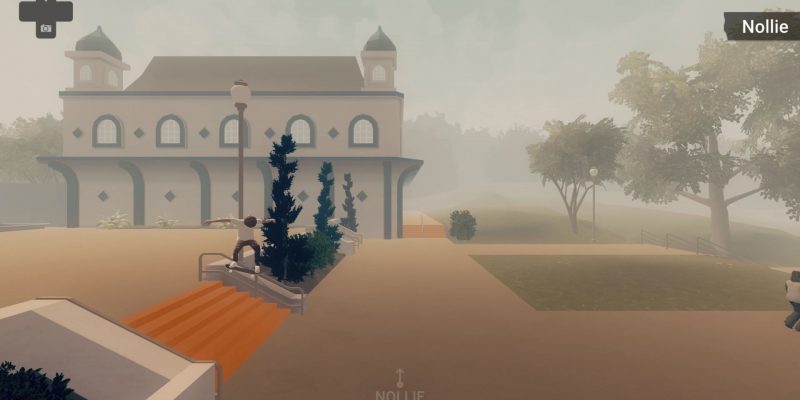 Who doesn’t love a good skating game? They’ve been a strong presence in the cultural zeitgeist since Tony Hawk first graced consoles, and they’ve never really looked back. Sadly, the frequent trend is that these titles would skip making the jump to PC. For this reason, the PC port of previously iOS-exclusive Skate City was an interesting departure from the norm. Can it manage to bring a dose of realism to side-scrolling skateboarding? Or will it burn out on the transition to our platform of choice?

Before getting too far into this review, it’s worth mentioning that you should play Skate City with a controller. I’m legitimately trying to understand how this was even remotely playable on an iOS device. If the keyboard controls were any indication, you would be doomed playing this on a touchscreen. If you have a spare controller kicking around, you’ll want to plug in for this bad boy.

Skateboarding isn’t an activity that’s easy to perfect. In the handful of occasions I attempted to do so in real life, I ended up with a pretty tender tailbone. Let’s just say that the kind of nosegrind I was pulling off would get you higher scores with a plastic surgeon, than with an X-Games judge. While most boarding games seem content enough to deliver plenty of arcade-centric shenanigans, Skate City grounds the action. It keeps the danger of the sport ever-present, while also providing several interesting and compelling sandboxes to explore.

To put it quite simply and bluntly, I was really bad at Skate City when I started. I was exceptionally terrible, make no bones about it. As somebody who played damn near every skateboarding game that released over the last decade (seriously, I have a genuine problem), I thought I’d seen it all. But for every game that is an off-the-wall interpretation of the sport, there was an equivalent title that was looking to take the activity back to its hardcore foundations, like EA’s Skate franchise. In this case, if Olli Olli is the outrageous title, Skate City is its simulation equivalent. Yes, I can hear you asking yourself, “How can a side-scrolling skating game be a simulation?” Let’s start off with the disclaimer that this isn’t going to teach you how to skateboard. That said, Skate City‘s presentation and delivery comes off far more muted and almost noir-inspired when compared to the silly shenanigans of Olli Olli 2. The action has a more street-level grit that helps set it apart. It’s also unafraid of handing you your proverbial ass in a paper bag. To genuinely improve, this is a title that will require time and effort, not to mention a spoonful of patience to boot.

The action of Skate City takes place across three simulated cities: Los Angeles, Oslo, and Barcelona. Initially, you only skate within the City of Angels in an attempt to acquire the street cred (also known as the in-game currency) needed to unlock the other two locations. Cred can primarily be earned through the challenge mode, but before you can even manage to do that successfully, it’s critical to first get the controls under your fingers.

A majority of the moves you will be performing center around the effective use of both control sticks. Skate City maps eight different primary moves to flicks of the stick, the four poles, and the diagonals between each pole as well. Performing a move with the left stick delivers the standard ollie-base version of a move. When performing the same move on the right stick, you end up with the nollie-equivalent of the same maneuver. While those are fairly straightforward to perfect, this is essentially just the tip of the iceberg. Next up, timing becomes crucial, as you learn the transitions to grinds and slides. These moves end up mapped to both the trigger and bumper buttons and are extremely timing-sensitive. For example, a bluntside involves holding either bumper until you land the grind. On the other hand, you can only perform a Nose or tail slide by pressing the bumper, as opposed to holding it until the landing. Some variants work similarly using the triggers as well.

This intense attention to timing is what gives Skate City a decidedly more hardcore feel than other side-scrolling skaters. When you mix in the likes of manuals, spins, and varials, this introduces the opportunity to chain together a series of moves into an extended combo. In simpler terms, practice makes perfect. And you better believe that if you haven’t done your homework, you’ll be on the receiving end of a colossal attitude adjustment.

As we mentioned earlier, the main focus of the game revolves around accruing the street cred needed to unlock the three Skate Cities. Once you feel confident enough skating literal loops around the city, it’s high time to check out the challenge mode. Each unique scenario takes place at some point in the selected city. They primarily revolve around objectives such as performing a series of moves on cue, racing against other random competitors, or navigating a portion of a stage without running into any pedestrians. One thing that I found a bit irritating about the challenge structure was how the scenarios themselves unlocked. To unlock each trio of scenarios you have to accomplish the minimum objective on each of the available challenges. If you get hung up on any specific stage, you severely run the risk of hitting a progression wall. Sure, this certainly incentivizes you to perfect every mission. But, if there was one mission you just couldn’t conquer, you end up replaying the stage until you get lucky enough to squeak by. It was infuriating.

After effectively grinding long enough to unlock each location, you might think that things are winding down. Then I realized there was a gear store. This retailer offers the chance to purchase more equipment and boosts to improve your stats and abilities. Why it took me over three hours playing the game to realize this is a bit beyond me. Personally, I’d like to lay that at the feet of the minimal hand-holding and tutorials. While this does further feed into the more hardcore-centric aspects of the design, it sure would’ve been helpful to know I could’ve simply purchased a speed boost when I was stuck losing race after race. Going into Skate City, you should know that you’re in for a grind. The emphasis is primarily on improving skills, as opposed to unlocking game-changing abilities. A vast majority of the maneuvers at your disposal are available right out of the gate. The trick is putting in the time necessary to perfect your skills and transitions. You’ll need to sink a substantial amount of time into the campaign until you begin to even remotely feel proficient. Hell, as I write this, I still feel like I’m terrible at the game. I’m substantially better than when I started, but holy hell do I have a long way to go.

I would’ve liked to see more locations available to explore. However, the different day/night and weather cycles help to provide a fresh coat of paint to something you’ve already explored to the nth degree. However, these different permutations to the action didn’t have a substantial enough impact on the actual gameplay. They don’t provide anything other than a bit of extra sizzle to the admittedly minimalistic presentation.

If you can take a step back and look at the “big picture” when it comes to Skate City, you’re being dealt a bit of a mixed bag. Though the controls are somewhat approachable, the depth and timing that goes into perfecting your skills will take far longer than you’d anticipate. Considering the game’s previous limitations due to the constraints of mobile platforms, it’s nice to see it stretching its wings a bit on PC. If you’re looking for an authentic boarding experience that can keep you coming back time after time, look no further.

What was once old is new again, as an iOS-exclusive skater makes the jump to PC. Find out if it lives up to the hype in our Skate City review.
7.5

Though admittedly basic, Skate City has brought a bit of the "pick-up-and-play" mechanics of mobile to PC, with mixed results. The basic visuals are countered by fairly complex controls, that are a fairly substantial time-suck to perfect. Some may not find this to be their cup of tea, but if your willing to invest the time and effort to 'git gud,' there's plenty of fun, just waiting to be uncovered.