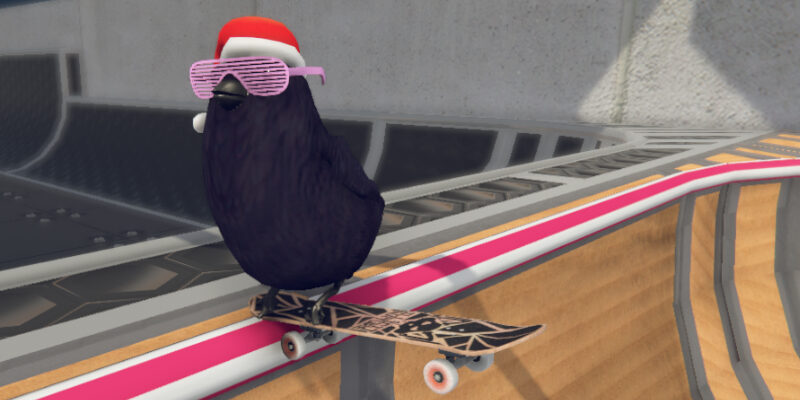 With the Tony Hawk series returning to form last year, the skating genre has seen somewhat of a revival. Once a staple throughout the 2000s, skateboarding games gradually fell out of favor. But they are now back, and it’s not just the big AAA publishers making them. Our indie friends are giving it a good go too, as shown by Skatebird.

Skatebird is a skating game, developed by Glass Bottom Games, with an avian twist. You play as a highly customizable bird and you help your bird friends achieve all of their skating goals. Clearly, this is a very serious game.

Your originally named bird compatriot, Big Friend, has retired from skateboarding. They aren’t happy with their life, and it’s up to you to help them turn things around. Using the power of sick tricks, you and your companions are going to help get Big Friend back on track.

Truthfully, the story doesn’t matter. It exists solely as an excuse to send the player to various areas. Similar to the Tony Hawk games of old, you progress through the story visiting new maps on the way. Each of these locations has its own fair share of new challenges and obstacles to overcome. 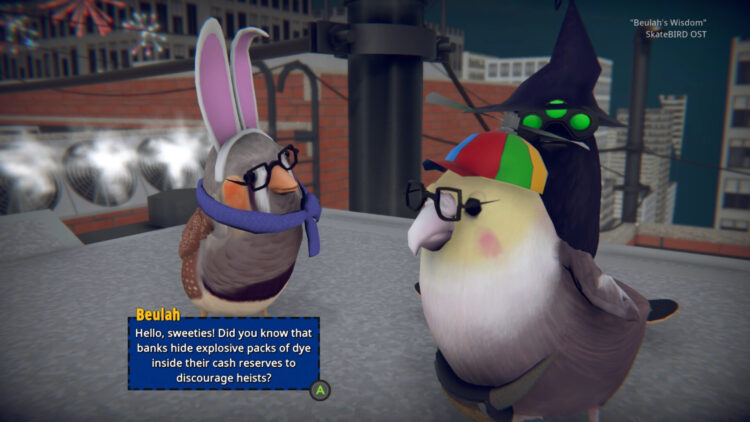 There are five skate parks in total that vary from a skyscraper rooftop to a living room, to a worker’s office. Glass Bottom Games took some liberties with each location to make them easier to navigate. Funnily enough, the real world isn’t designed to be tackled by skateboard, so these adjustments are appreciated.

Outside of story missions, there are a variety of collectibles that can be found at each park. Some of these are easy to find, while others will require some extra exploration. Finding these collectibles unlocks new customization options for your bird as well as additional songs. While I’m on the topic of music, Skatebird has a bizarre soundtrack. It’s not necessarily bad, but there are some songs that are just weird. One of them is literally just a guy narrating bird facts over a beat. That one is worth checking out purely for the experience.

A skateboarding game is nothing without its skating. That sounds obvious, but this alone can make or break a game in this genre. Just look at the state of 2009’s Tony Hawk’s Ride, arguably the worst skateboarding game ever released. The game’s blatant flaws completely overshadowed any of the good ideas present.

Thankfully, Skatebird is nothing like Ride. For the most part, skating in this game is satisfying. Moves chain together reasonably well, and there’s enough variety to keep combos interesting. You can ollie, grind, lip, flip trick, grab trick, and transfer. That covers all of the basics that you would expect in a skateboarding game. 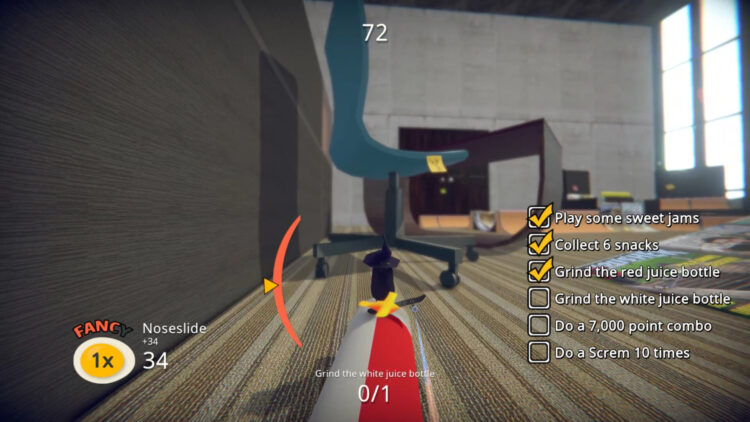 Despite it feeling fun to play most of the time, there are exceptions. The physics engine in particular can get awfully janky. There are times wherein the middle of a trick you will randomly turn 180 degrees and fall off your skateboard. Equally, I encountered several instances of the camera glitching out as I got stuck on certain surfaces.

These aren’t game-breaking glitches by any means, but they can be frustrating. It’s especially true on the missions that require large points combos, as you can lose an entire streak due to an unpredictable physics-related bug. It’s never a nice feeling to have to start over because of something that wasn’t even your fault. 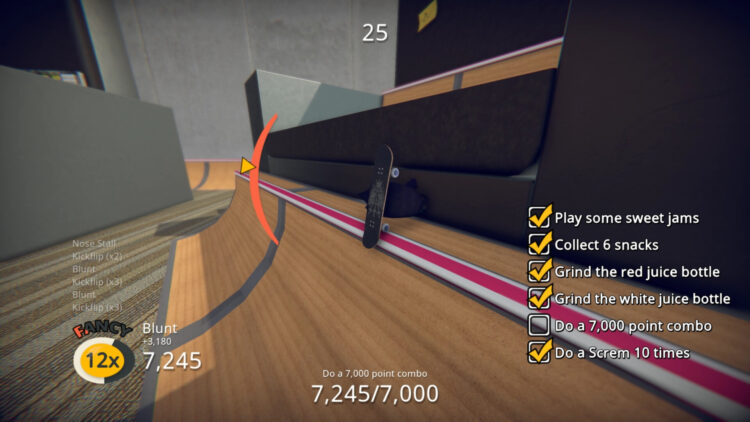 There’s something not right about this blunt. I can’t quite put my finger on it.

I do appreciate that the developers have made an attempt to make the bird aspect of Skatebird more than just a funny pun. You can squawk mid-ride to extend a combo, which is nice as it makes chaining together big tricks more forgiving. Furthermore, your wings can be used to propel yourself in the air in the middle of an aerial trick.

With practice, this can result in some fun transitions between grinds and transfers. Being able to propel yourself from one ledge to another and follow that up with a well-worked grind is satisfying. I will say, though, that I don’t like how manualing works. In most skateboarding games, manuals are used as a skill-based mechanic to extend a combo in areas without ramps and rails. However, in Skatebird it only extends the combo’s duration for a short time making it useless in most situations.

There are better ports out there

Regarding its textures and environmental details, Skatebird is serviceable. Although not outstanding by any means, it pulls off the look of an indie skateboarding game well enough. There’s a particular charm for the bird models themselves which ride a fun line between realism and, well, birds riding skateboards.

Unfortunately, the overall look of Skatebird is let down by this game’s awful implementation of bloom. Anything further than 20 meters away has a smeared visual effect on it. I assume it’s supposed to replicate depth of field but in reality, it just looks like the game is playing at an outdated resolution. This wouldn’t be too big a problem if it could be disabled, but I couldn’t find an option anywhere. Speaking of which, the lack of available graphics settings is disappointing. There aren’t even options for basic settings like anti-aliasing or motion blur. 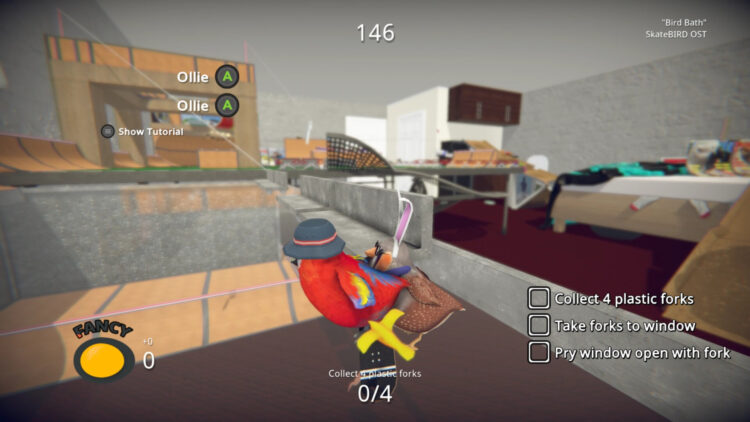 Thankfully, the performance of Skatebird is more impressive. Throughout my time playing, I hardly noticed any framerate drops. In fact, I believe it only dropped below my monitor’s 144Hz refresh rate on two occasions. That is not bad at all given the hours played.

Skatebird also scales well with lower-end gaming GPUs with the GTX 1060 Mobile fitted in my laptop, managing consistent three-figure framerates. Given that the minimum recommendation asks for an Intel HD 4000, I’d imagine just about any modern PC can comfortably run this game.

I can appreciate what Glass Bottom Games was trying to accomplish here. Skatebird is a fairly fun skateboarding game with a hilarious quirk that anyone can get behind. In that regard, it’s silly, inoffensive, and a decent option to burn through a few hours with. The skateboarding mechanics are decent and the dialogue is written well enough to get a few laughs out of me.

Beyond that, there’s just not much depth to it. And if it was just a simple skating game without significant flaws, that would be fine. But its weird physics bugs are frustrating enough to negatively impact the skateboarding itself. Even if I look past that, the poorly implemented bloom is far harder to disregard. It’s constantly in your view and I honestly found it to be uncomfortable in prolonged sessions. Some players may not notice it at all but for me it was genuinely problematic.

A decent skateboarding game with an entertaining theme and quirk. The physics and visuals imperfections hold it back for sure, but there's still enough there to have a good few hours of fun.