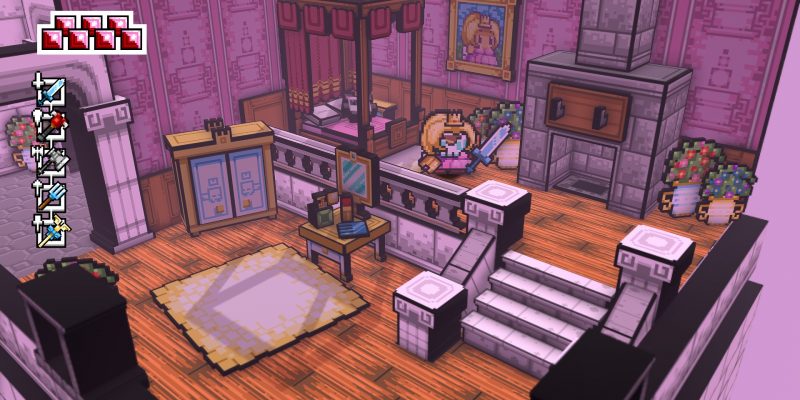 I wish more games made heavy use of 2D sprites in 3D worlds. There’s just something about the aesthetic that hits all the right notes for me. Skellboy Refractured doesn’t break a ton of new ground and has underwhelming combat, but the strong level design, cute sprites, and enjoyable premise help to make it an adventure well worth undertaking. This version also has more content than the Nintendo Switch one to boot. Plus it lacks that version’s technical issues.

Skellboy Refractured tells the story of the titular character who is, yes, on a quest. The evil mage Squaruman has used the legendary BlazeMace to plunge the kingdom into despair. The undead are running rampant, the kingdom’s heroes are missing, and a farmer’s four cows have wandered several dozen feet away from where they’re supposed to be. It’s up to Skellboy to stop Squaruman and return the land of the Cuboids to normal.

As you’ve no doubt already guessed, Skellboy Refractured doesn’t take itself seriously at all. This is a silly, lighthearted game where all of the characters constantly riff on the fact that they’re square and pixelated. The writing, while imaginative and flavorful, can be a bit awkwardly written at times, however, as the script needs some additional TLC. For the most part, though, it gets the job done and it’s easy to end up smirking while reading the dialogue. 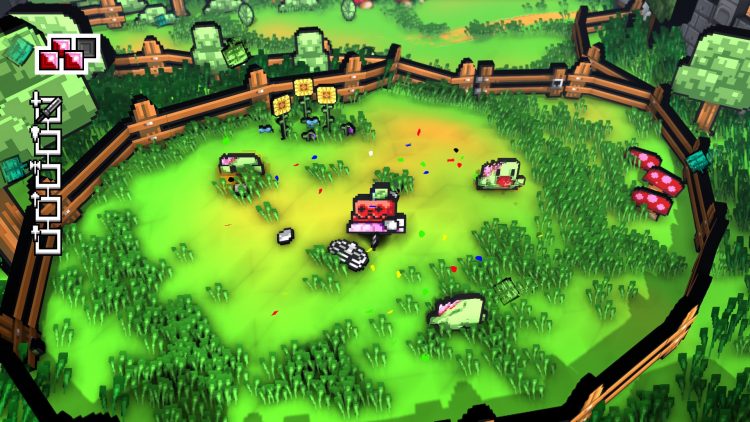 Skellboy Refractured is played from varying carefully positioned camera angles, as the scenes are set with 2D objects that look best when viewed from those angles. You move Skellboy around an interconnected world while fighting and jumping on things. There’s a decent balance between platforming and action, plus there are some light Metroid-esque elements to be found. Some locations can’t be accessed without specific abilities and the like.

But Skellboy Refractured doesn’t actually have normal abilities, per se, which ties in with its main unique feature. When the game begins, Skellboy has a skeleton body. But defeating enemies often results in them dropping body parts. Body parts come in three varieties: heads, torsos, and feet. You can swap out any of the three whenever you find a new piece and they have varying abilities and bonuses. For instance, one enemy drops a head that can be used to shoot a powerful, if inaccurate, projectile. A late game torso comes with the ability to hover. Many parts increase your health, but some have negative effects, such as decreasing your movement speed.

Similarly, Skellboy can obtain new weapons as well. There are five types: swords, maces, axes, lances, and wands. These are typically found strewn throughout the area or even dropped by foes. But certain weapons (and body parts) can only be obtained through side quests. One feature I really love in Skellboy Refractured is that every checkpoint not only functions as a fast travel location but is also a vault that stores any weapons or gear you’ve found. If you ever feel like changing things up, you just need to go into one of these and grab what you want. This is especially useful since some items can only be found a single time during gameplay. 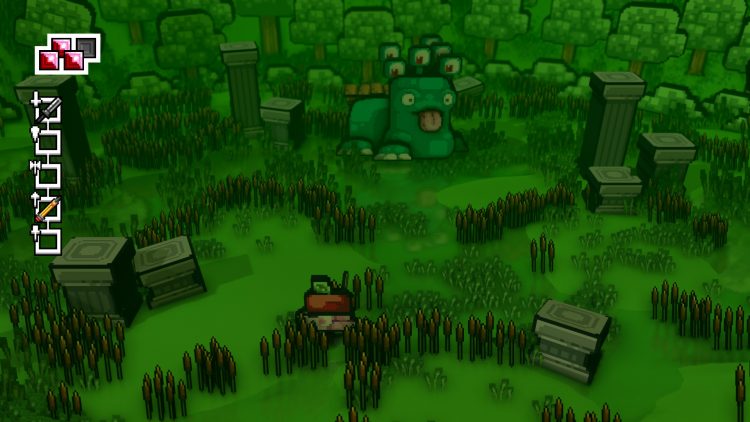 While the concept and visuals are right where I wanted them, the combat does leave a bit to be desired as it’s as basic as it gets. Weapons feel unwieldy, and I wish there were more impact to the fighting. As it is, you just mash the attack button and hope to hit nearby enemies. The sword swings in an arc but simply isn’t satisfying to use. Lances can only lunge forward and are horribly inaccurate and can’t be used to hit more than one enemy. They can be thrown and retrieved, but I never found a reason to use them. Maces, however, are hands-down the best weapon in the game. You slam them on the ground, creating an area of effect that allows you to hit anything nearby.

From what I can gather, axes and wands function much like the sword. Although, the ax is thrown during the combo, which adds more of a reason to use it. Enemies in Skellboy Refractured are mostly standard fare, with zombies, evil knights, and various monsters. There are occasionally other ways to deal with foes, such as usable crossbows that one-shot them. These can also be used against you. There are a handful of boss battles too, which are mostly easy but can be fairly clever. That being said, I found the final boss fight to be underwhelmingly simple.

Overall, Skellboy Refractured is a fairly easy game, even if I wouldn’t call it too easy. Most enemies don’t do all that much damage and there are often plenty of places to find health cubes. Checkpoints can be placed a good way from one another but I didn’t often find that to be much of a problem. Playing through the entire game was a mostly smooth experience and took me about 7.5 hours without doing all of the sidequests or spending much time in the game’s rogue-lite dungeon. This is a new addition that should help to give the game a bit of extra staying power as you take Skellboy through randomly generated levels with different biomes in search of treasures. 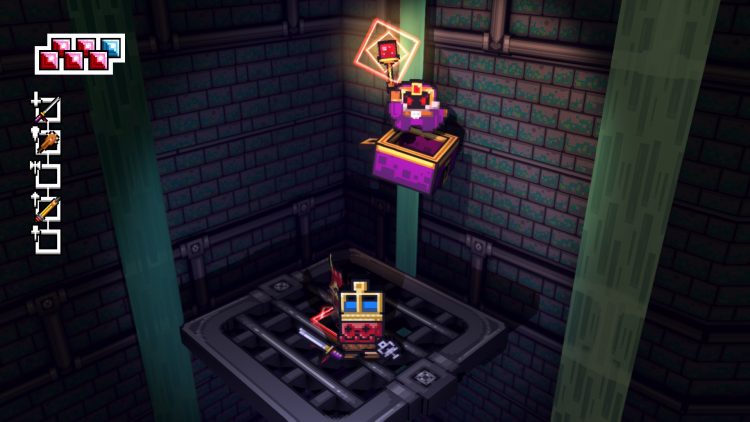 Who turned out the lights?

Despite the progression being mostly smooth, Skellboy Refractured has the occasional issue with signposting. Sometimes it’s unclear how you’re supposed to progress or you’re expected to backtrack a while through an area. These aren’t major issues, though, as they’re brief and it isn’t too difficult to figure out what to do. I still needed to consult a guide at a few points, though. The absolute worst thing about the game is a late section where you’re forced to platform and fight in a nearly pitch-black dungeon with nothing but a tiny circle of light around your character. I generally enjoyed the game’s level design and found the vibrant, varied locations likable. Save for this one, which was an absolutely awful slog requiring both memorization and luck.

During this section, you can easily die by falling off the platforms that you can’t see. At one point, a horde of enemies is unleashed upon you. This section wouldn’t be problematic at all if you could see even slightly better, but as it is, you have to blindly fumble in the dark until it mercifully ends. To add insult to injury, there’s a fake-out boss battle at the end of this section that isn’t actually a boss battle at all, since you don’t appear to be able to harm your enemy. The fight goes on until there’s nowhere but spikes left for you to stand. You have to try going behind the not-boss to actually reach your destination. This entire section not only doesn’t sit well with the entire game that precedes it, but it also actively damages the entire experience.

Still, I like Skellboy Refractured. It’s entertaining and has a fun, colorful aesthetic. There’s a new game plus as well and the rogue-lite dungeon for anyone who wants to keep playing, so it’s mostly easy to recommend. That is, as long as the pitch-black section towards the end doesn’t ruin it for you. 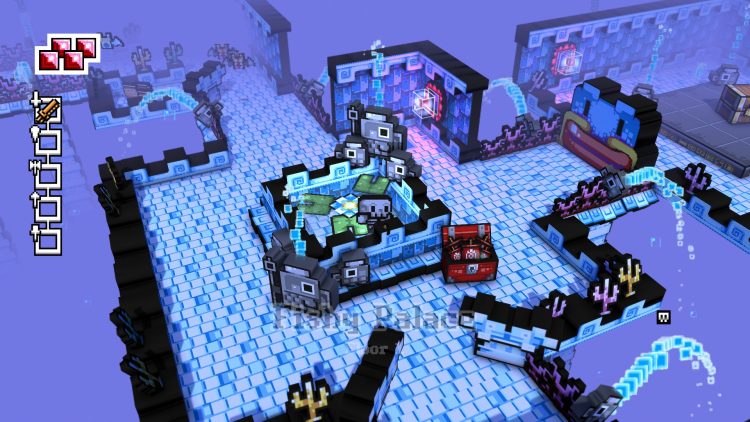 Skellboy is an entertaining, brisk adventure. The general mechanics are solid, and it's hard not to like switching out body parts, even if the combat could use more immediacy. Fans of action-adventure games and 2D pixel art will likely have a good time.

Oddworld: Sousltorm review — Abe’s back and better than ever