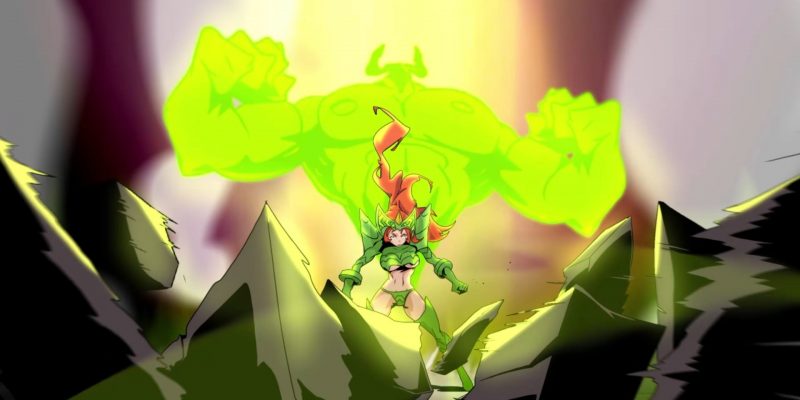 Mixing genres is often fun. One of the old standbys is to take an action game, staple it to a strategy or building game, and presto! You got yourself a winning combo. Following in the footsteps of such semi-classics as Actraiser and Dark Cloud is Smelter, a game that’s part tough-as-nails side-scrolling action platformer, part building game with real-time strategy elements. It’s got a good amount of content, great pixel graphics, strong level design, and precise controls. It’s let down a bit by the strategy half of the gameplay, which is still solid, but not deep enough on its own. We’re left with a damn good game that’s well worth playing.

Smelter is based off a very old story. I’m speaking, of course, about Genesis. Eve and Adam live in the Garden of Eden, before Adam (what a twist!) takes a bite out of the apple of knowledge. Naturally, that gets the two of them ousted. Adam goes missing and Eve meets up with a winged creature named Smelter. He makes her an offer that she can’t refuse: work with him to get his power back and he’ll help her find Adam. This is a Japanese-influenced game, so Smelter naturally turns into bikini armor that Eve can wear. The two of them then set off into the Rumbly Lands.

Smelter is full of dialogue, and it’s loaded with humor and personality. The humor will not be to everyone’s taste, but the general narrative held my interest. Most of the game is built around three arcs in each of the three main areas of the Rumbly Lands. They all have their own sets of villains and allies, too. It keeps the game feeling fresh and different over its 10 to 15 hour runtime. The graphics are excellent, with lots of great sprite work in both the side-scrolling stages and the overhead strategy in the overworld. 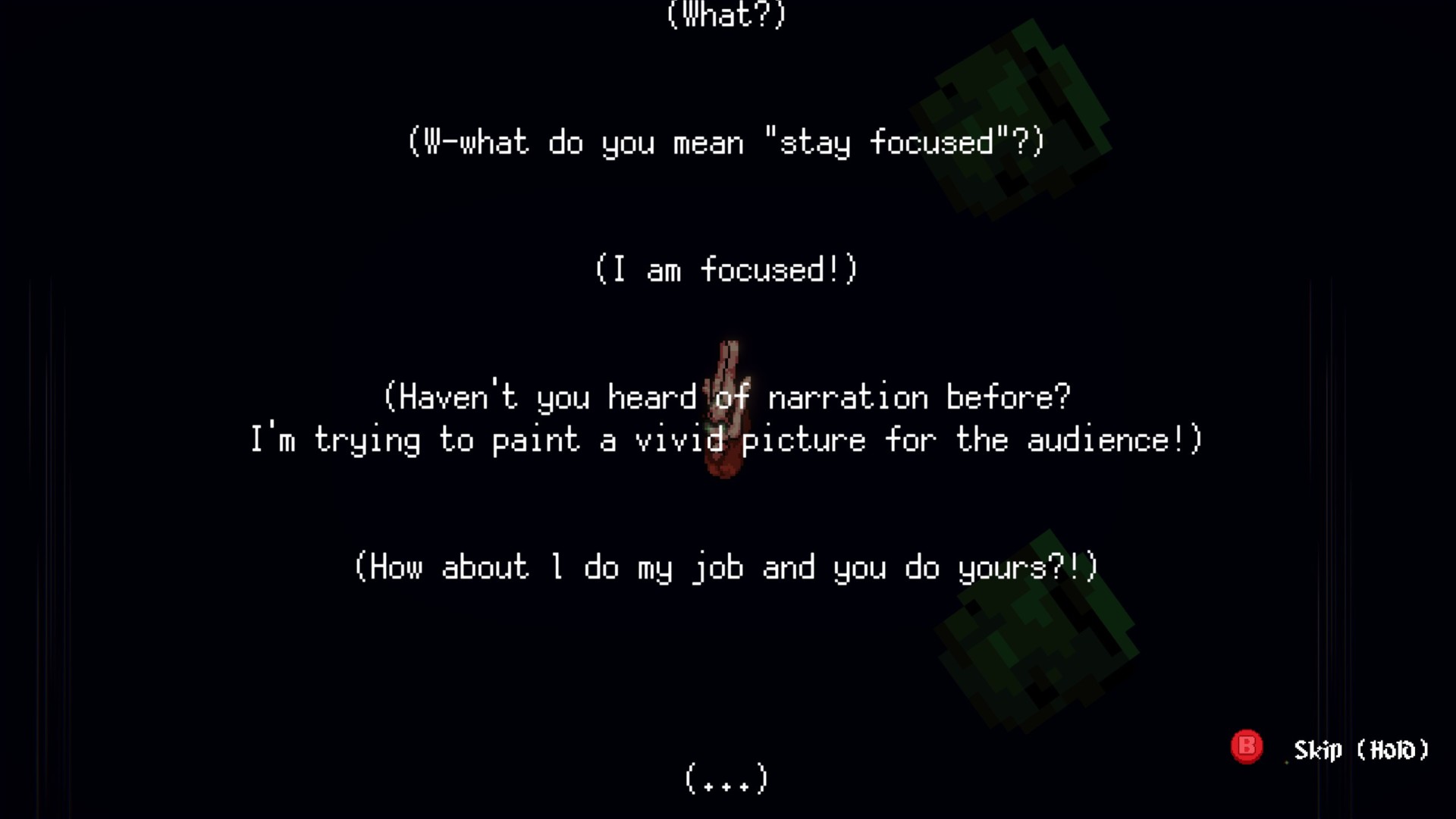 To tame a land

Most things in Smelter are accomplished by moving through the overworld. Unlike the side-scrolling stages, where you control Eve wearing Smelter as armor, you can move in any direction in the overworld while directly controlling Smelter. He flies around but can also attack in the method of a twin-stick shooter. There are regions to the north, west, and east where the story arcs are located. Smelter can use a constantly replenishing resource to claim land, which can then have one of four buildings placed on it.

Smelter has an army made up of beings called Zirms. To add more to his army, he needs to set up a Zirm House. But Zirms need food, so he needs to plant orchariums, which produce apples. Once you have fed Zirms, you’ll set up barracks or outposts, which have either infantry or archers. As you move through the territories, you’ll need to continuously increase your Zirm population while setting up your army to ward off enemy incursions. It’s interesting and fairly enjoyable, but limited and never changes much.

Each of the three areas has four main levels. Completing the first grants access to the entrance, plus it gives Eve a new moveset. While in the side-scrolling stages, there are three separate loadouts, all with their own weapons and abilities. There’s a close-range, earth-based one where Eve attacks with claws and can double jump, slam the ground, or use armor that allows her to move despite wind resistance. There’s the medium-range electric one, which gives her an electric whip, the ability to dash up walls, and lets her move through electric current. Then there’s the ‘Mega Man’ loadout that lets her shoot a blaster, glide, and become incorporeal (and invincible) for a moment. 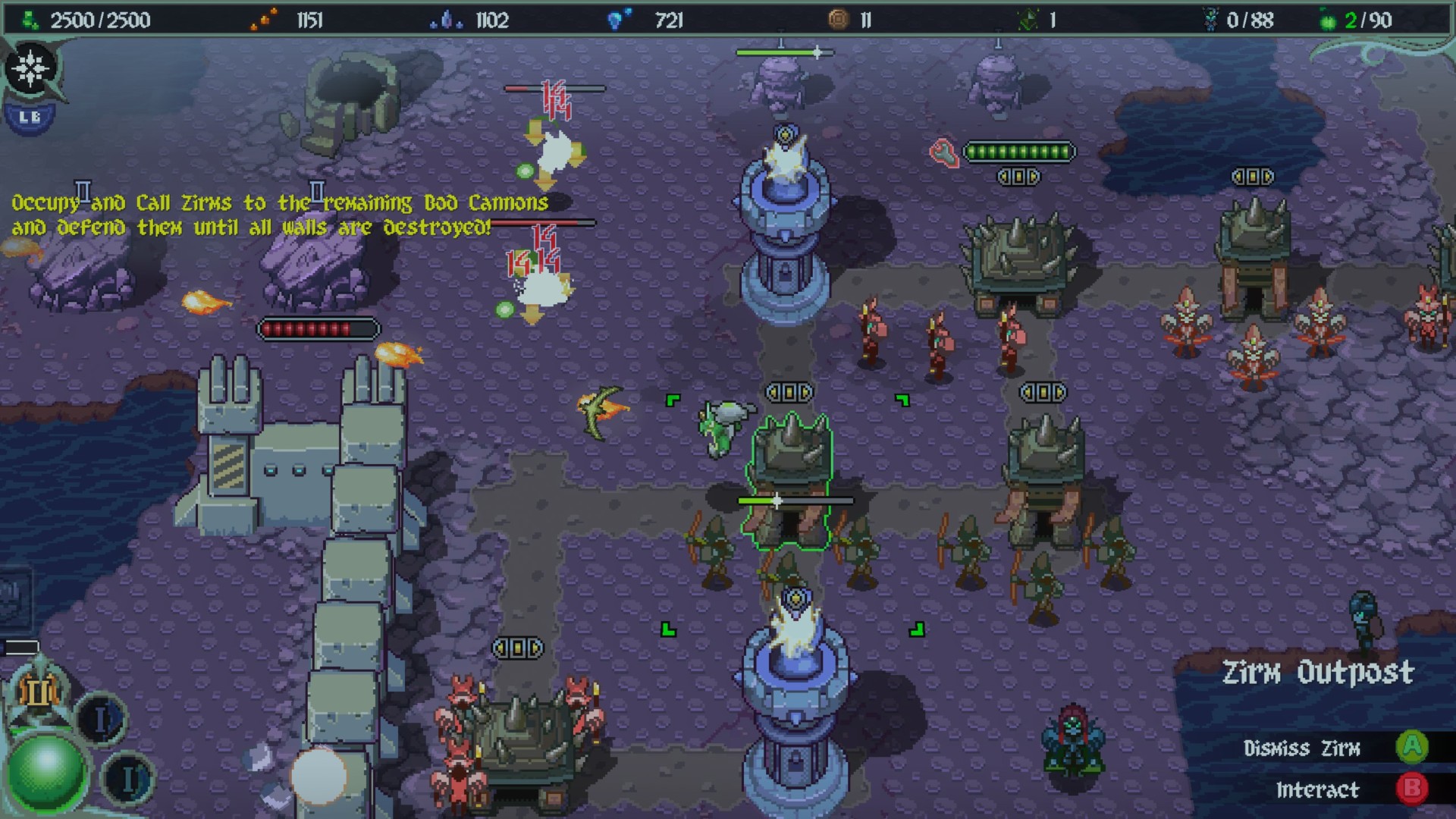 Each area has three Doma Runes that you’ll need to acquire to progress, and they are acquired by beating the action stages. Accessing these requires doing a strategy mission in the overworld. Usually that entails having as many soldiers as you can in an area while you work with them to defend certain buildings after having some Zirms occupy the area. This can be frustrating if you don’t know what to do. But, might makes right. Once you complete these missions, you can enter the stages. Each stage is notably different, with their own unique tilesets and gimmicks. Each also has trials you can find, plus collectibles that can strengthen your empire.

Trials are some of the staunchest challenges in Smelter. Beating them gives you a token that’s used to add a new skill to one of Eve’s movesets. The action levels are built around platforming and combat, both of which are top notch. You’ll need to switch between the different movesets to traverse the areas, as the diverse movesets are useful against certain enemies. The Mega Man moveset really does feel just like Mega Man X too. That one can even air dash! There’s an absolute ton of stuff in Smelter.

The level design in Smelter does a lot to keep you on your toes. You swap between the three movesets on the fly, but you can’t cycle back around. It’s only a problem when you want to switch from the blaster/glide one to the claw/double jump quickly. I wish you could either go back around or select them from a menu. But each moveset has its uses and is smooth to control. Most sections see you only needing one, such as gusts of air that let the blaster one float. But there’s plenty of reason to vary your approach. And you’ll want to do that because of how tough the game can be.

At times, Smelter can border on obnoxiously difficult, but the game controls so well and its level design is typically direct enough that it’s not hard to find the way forward. Some of the collectibles are hidden fairly well, though, so looking around carefully is helpful. The trials are easier to find. Sometimes though, I just didn’t want to do them, as they’re a kind of hard that demands focus. But the movement is so responsive and enjoyable that even these have a lot of fun in store. When you’re not cursing the cruelty of the platform or enemy placement, that is. Checkpoints in the levels themselves will also be a little too far from one another for some. But this isn’t a game that holds your hand. 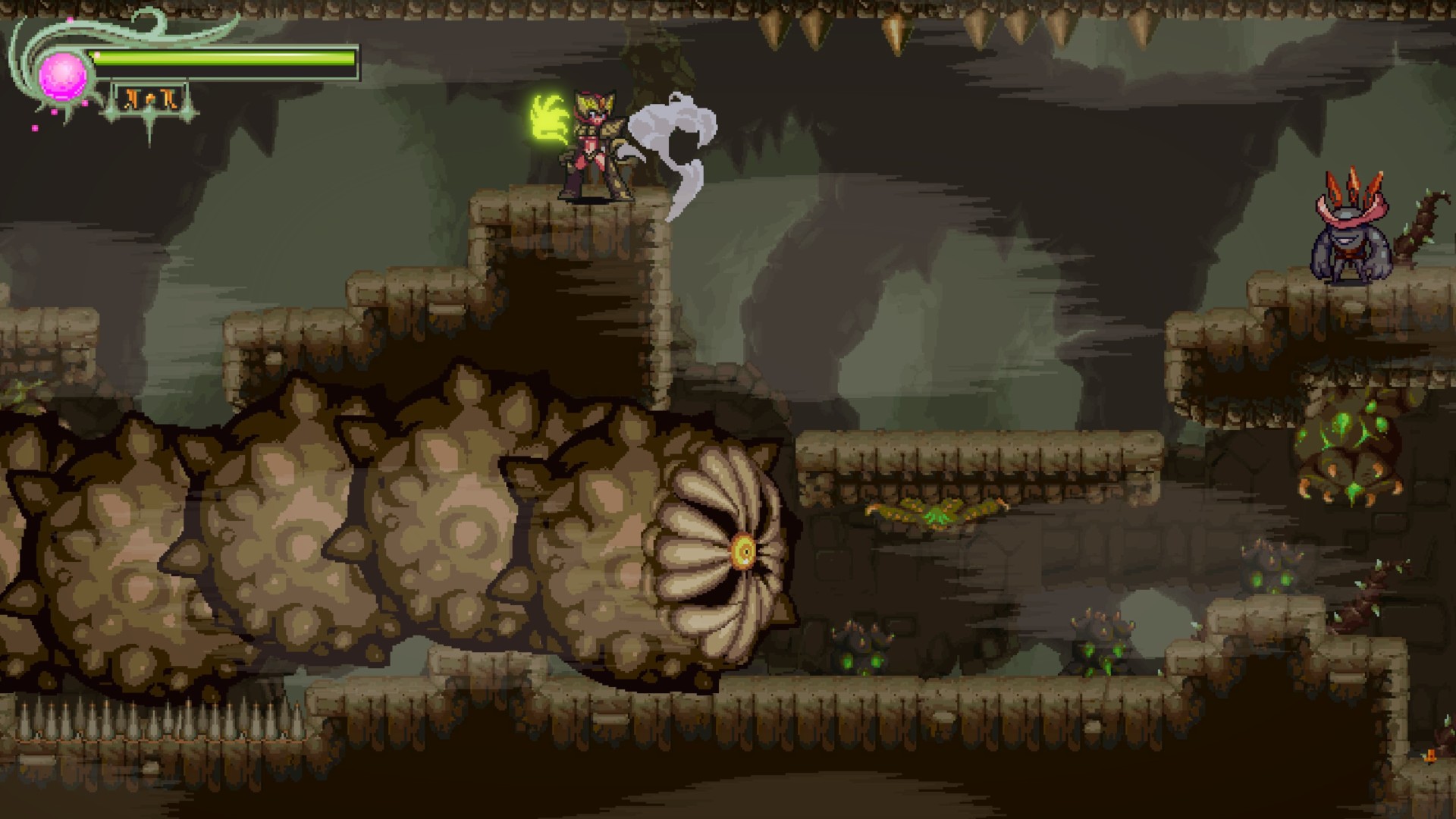 Beating levels unlocks improved shots when you play as Smelter in the overworld. These break rocks that obstruct progress. While the stages themselves are varied and constantly different, the overworld gameplay simply can’t compete. It’s basic and repetitive. There are a couple of times where Smelter turns into a full-on, twin-stick shooter, which helps break up the pace of the overworld. For the first several hours, the game doesn’t have boss battles, but there’s a fair amount of them to fight. They tie into one of my major issues with the game: the difficulty is inconsistent.

Some levels and bosses have a high level of difficulty with little room for error. Sometimes you’ll get through a tough level, only to find an easy boss. Other times you’ll get the opposite. The difficulty can be a bit much at times, though, as some sections and bosses are too cheap or tedious for their own good. I generally had a good time, though. The game ends with a challenging-yet-doable gauntlet of demanding stages, plus a multi-stage final boss fight. Depending on how much you do, Smelter could easily run you 15 hours if you want to max out skill trees and get all the upgrades. I put about 13 hours in.

Smelter is a strong game filled with killer side-scrolling action alongside less impressive strategy sections. But there’s still so much to it; so many creative ideas are packed into the game that it’s hard to be anything other than impressed. The difficulty may be inconsistent, and it’s hard enough that people looking for a breezy time might find it too much for them, but I recommend Smelter even if it can be a bit uneven. Plus, who doesn’t love to see bible stories turned into ridiculous anime nonsense? 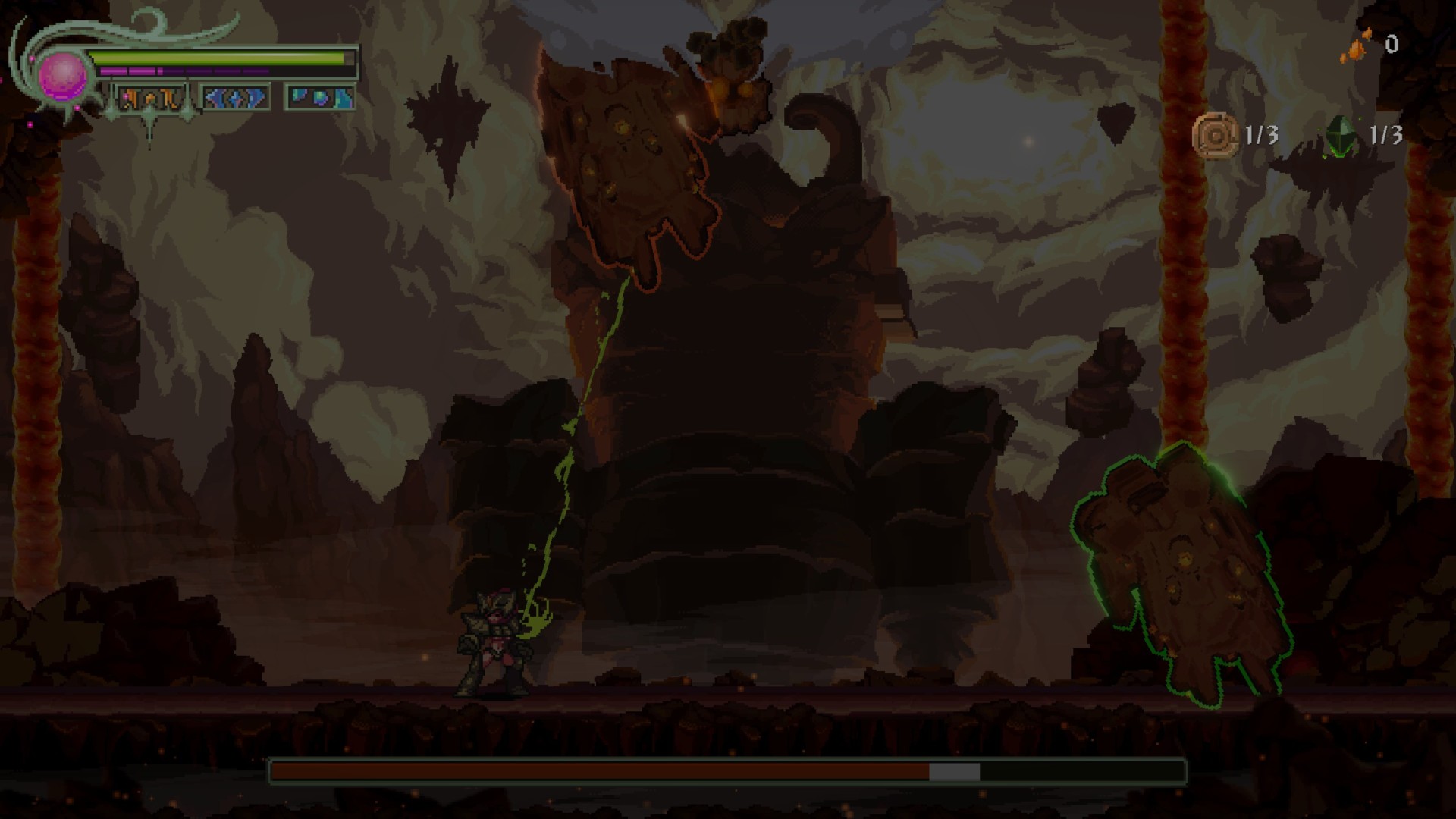 A satisfying combination of action platformer and strategy game. The former might be notably better here than the latter, but Smelter is a decently long game with great visuals and gameplay.

NieR Replicant tech review — A little better, but not quite there