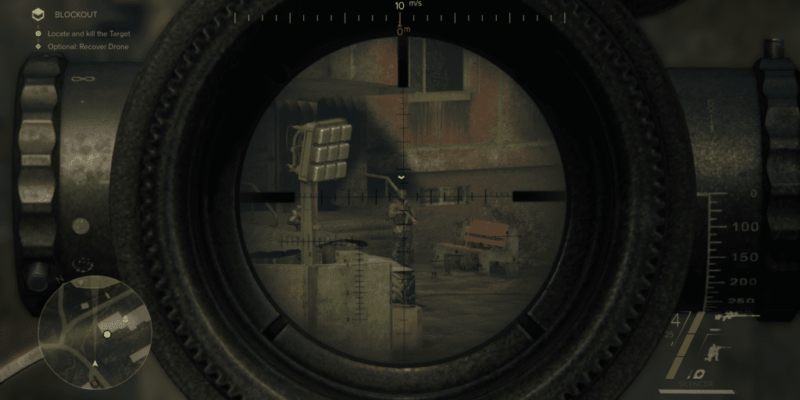 At the risk of being hauled in front of the court for pun crimes, I must say that Sniper Ghost Warrior 3 is really expanding the scope of the series. Sniper Ghost Warrior 2 (AKA Operation Follow That Diaz) was not a good game. It’s been almost four years since I reviewed it, but my abiding memories are a lot of linear pathways, a few fixed position sniping galleries at the end of missions, and the worst ‘Follow an NPC man’ excesses of the Call of Duty series.

Sniper Ghost Warrior 3 has opted to dispense with the linear tracks in favour of an open world (an open bit of Georgia, to be more precise), and you can set up your sniping kill zones pretty much wherever you damn well please. NPC commands are now disembodied voices in your ear; so if you fancy going off message and distracting yourself by sniping passing motorists instead of retrieving a vital drone, you can. Mechanically, well, it’s all gone a bit Far Cry. 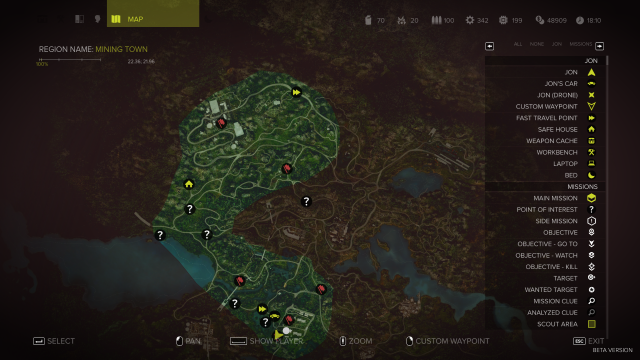 I mean, look at this map and tell me a part of your brain didn’t go “huh, Ubisoft”.

A Bit More Realism Far Cry, anyway. We’re not talking Arma 3 levels of military sim detail here or anything, but you can’t invite too many bullets inside your fragile body before falling over. That may change as your character (Jonathan ‘Jon’ ‘Call me Jon’ ‘It’s me, Jon’ North) improves his skills and gets hold of sturdier armour, of course.

This beta version of the game offers a walled off slice of the main world, and two proper missions. It dishes out plenty of cash so you can play with most of the game’s gadgets, but you’re otherwise just a guy with a sniper rifle and a corporeal shell that’s vulnerable to high velocity bullets.

The two missions in question are Blockout (in which a war criminal is hiding out in a reassuringly concrete block of flats, protected by a moderate force) and Cut Off (during which you have to mess with a bunch of satellites inside a base to scramble enemy communications). Where these missions would actually fall in the full game isn’t really clear, as you’re pretty much air-dropped into a jeep on the way to a Safe House. In a brief moment of fourth wall breaking that’s both unexpected and rather funny, the main menu music is still playing over the radio. Jon switches it off in irritation. 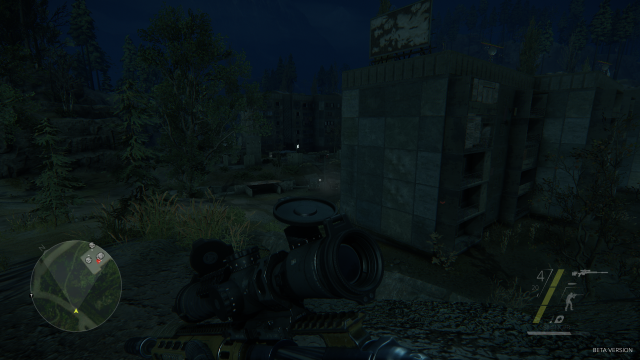 The most brutal of Brutalist architecture.

As well as being as safe as the term suggests, your Safe House is also your shopping mall for brand new weapons and gizmos (smoke grenades, better scopes, silencer repair kits, handy spy drones and the like). It has a work bench too, for some rudimentary crafting of bullets and equipment from materials you find out in the world. This may prove more handy in the real game, when the beta isn’t showering you with more cash than a Saudi Prince finalising an arms deal.

You get a bed too, for magically healing your wounds with sleep, and for advancing time if you fancy going into a mission during the helpful cover of night. 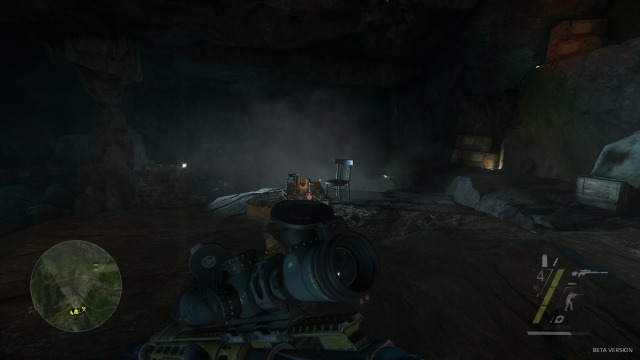 Sniper Ghost Warrior 3 seems to lend itself to a stealthier approach. I’m sure it’s somewhat possible to go ultra-direct – after all you do get an AK-47, frag grenades, and some C4 as part of your kit – but my success in Blockout came from a more considered set of actions.

Somewhat guided by the secondary mission of locating a downed drone with information on it, I skirted around to a block of flats opposite the ones housing the assassination target. A silenced pistol took care of the token set of guards on the way up to the rooftop (unfortunately, somebody found a body at one point), and the roof itself presented a lovely view of the courtyard and building across the way.

When close to certain surfaces, you can plant your sniper rifle in a more stable, supported position. Your inevitable ‘sniper sense’ key (which will highlight points of interest, mark enemies a little more clearly, and so on) can point out useful sniping spots, but you’re also free to just pick your own. That I did, and managed to bypass Mr War Criminal’s private pack of bodyguards with a crisp shot that … actually missed and hit him somewhere on the arm, alerting everybody. A second shot finished him off though, and the rooftop had a convenient zip-line upon which to bugger off back to my parked vehicle. Job done.

Paul, it seems, had a somewhat harder time with this mission, as the video below demonstrates. Again, that’s Paul in the video, not me. I’m eager to distance myself from the skills on show for no particular reason.

I mean if I was really being a jerk, I’d show off my own mission success screen for Blockout or something. Oh, wait, what’s this? 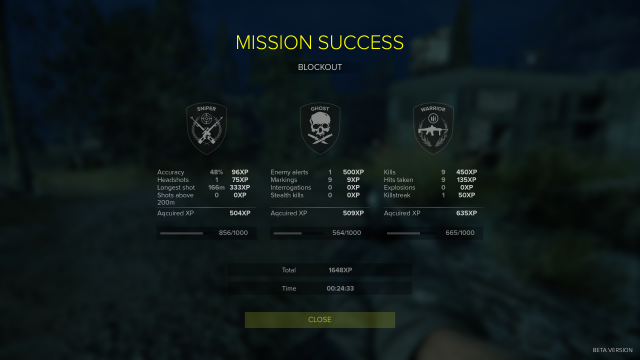 Not the cleanest operation, but it got things done. Here are the three areas you level up.

It’s only in beta at this stage, but since Sniper Ghost Warrior 3 is due for release in April the bulk of the game must be fairly set in stone. That being the case, it marks a pretty dramatic improvement over the second game. There are some things I’d love to see addressed before release, however.

AI barks are far too over-zealous at the moment, repeating the same alerted phrases every few seconds; and the sound design doesn’t seem comprehensive enough to indicate distance, so foes can sound closer than they really are. It’s possible to clamber and mantle up various bits of scenery, but some (rock formations in particular) can’t be scaled even though they seem to be the right height and shape for it. A reverse problem occurs too. Sometimes when you’re high up it’s not exactly obvious what you can safely climb down upon (sometimes there’s a button prompt, sometimes there isn’t), which can result in some hilarious pratfalls.

The biggest issue, though also the one I suspect likeliest to be fixed, is PC performance. With a mix of medium and low settings on an i5-6600 / 16GB RAM / 4GB 380X machine, I was able to get 60fps (turning v-sync off was a must, it seemed keen to default to 30fps no matter what), but it was an unconvincing 60fps. Even though Steam’s little counter insisted I was in the 55-60 range the vast majority of the time, you wouldn’t have guessed it from the stuttering, jerky frame pacing. 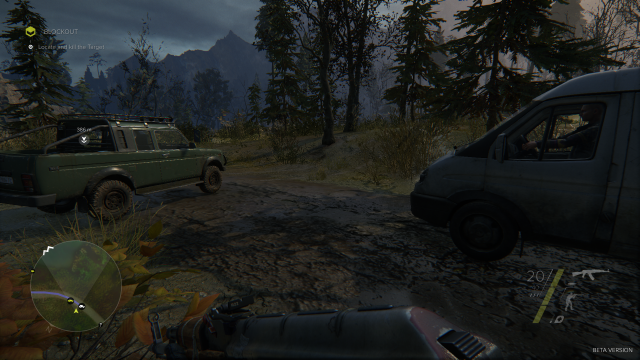 It’s using CryEngine, but that’s not exactly the kiss of death for lower end hardware it once was. The Minimum system requirements listed on Steam are modest, and Recommended is pointing towards a 480/1060 equivalent. Not that raw power will achieve much if the frame pacing is off.

If they can sort that business out, CI Games may well have a surprise hit on their hands with Sniper Ghost Warrior 3. A surprise for me, in any case. The series seems to be a consistent seller despite the second game’s generally poor critical reception, so perhaps the large shift towards greater freedom of approach and a more Far Cry-ian model will upset the fan-base. Who knows. As far as I’m concerned, it’s all rather encouraging.