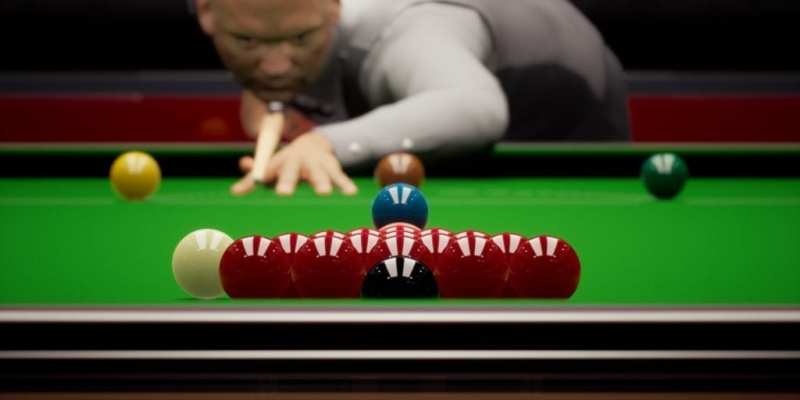 Authentic simulation titles are known for priding themselves on realism. As a result, they’re adored by the most die-hard of players who want to indulge in an engaging experience. They want it to immerse them enough to at least subtly give off the illusion of it being like the real deal. That’s great, but can a game be too realistic for its own good? That’s kind of how I feel after putting over 5 hours into Snooker 19.

It’s been a while since I played a game that featured pool/billiards, but as I was informed by a colleague prior to playing this, the real-life game of snooker is different than those. The core concepts are clearly all very similar, though. Basically, a game of snooker involves you taking the white ‘cue ball’ and using it to sink the various other balls on the table. You begin with hitting a red ball, which is then followed by one of the differently colored balls (black, blue, orange, yellow, green, pink/peach). The player alternates between the two until they’ve sunk all red balls, which then leads to focusing exclusively on the colored balls. Each red ball is worth one point, but the colored balls each carry a different value and must be sunk in ascending order once the red balls are eliminated.

That’s the gist of it, and here’s the thing — the game doesn’t outright explain that. 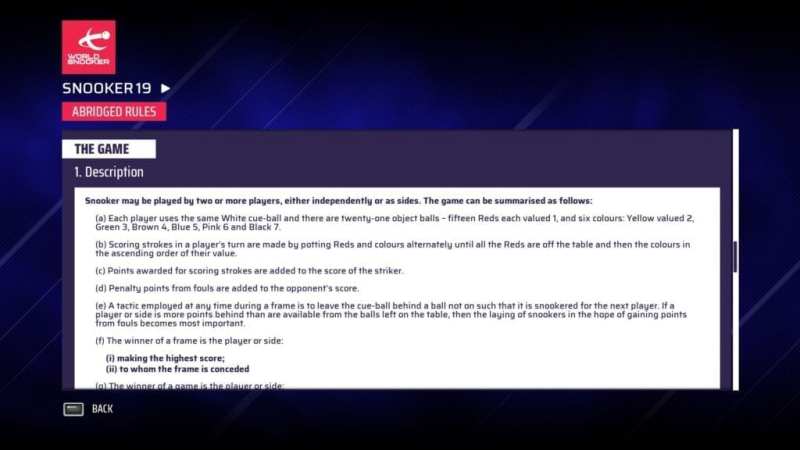 There’s an interactive tutorial, but it doesn’t give all the information you’ll need to win.

While there is a tutorial mode, it mainly focuses on introducing you to the controls. There is a slight learning curve, but it’s still a very simple game, mechanically speaking. Even so, controls are given far more attention than the actual rules themselves.

While the controls are a part of an interactive tutorial, the rules are explained in an ‘abridged’ guide that’s tucked away in the options menu. Despite being a shortened form, it includes 30 sub-headings, explaining the different aspects of the game. It’s great this guide is provided, but again, it’s all text. Plus, while the game introduces the core aspect of using the cue ball to shoot at the red and colored balls, it fails to mention deeper rules, such as fouls. Thus, I spent a lot of time during my initial few hours trying to figure out what not to do, as I was hit with fouls throughout.

Getting hit with a foul transfers some points over to your opponent, and even the smallest amount can cost you an entire game. The number of sunk balls and issued fouls limit the amount of points each player can score. So, it really ends up becoming a fight to see who can sink as many balls first without messing up. That leads me to another complaint — the AI is almost flawless.

Despite the fact that I’ve been playing on easy mode, there have been many times where I just found myself sitting there watching the AI sink ball after ball. Occasionally, it would make one or two mistakes throughout the game, but these are so few and far between that almost every match feels unbalanced — at least to someone who is a complete beginner. Since I’ve never played snooker before in game form or real life, I was lost for a good while. Watching the AI (and a quick gameplay video) actually did help me, but I still felt jilted due to how much better the AI can play. 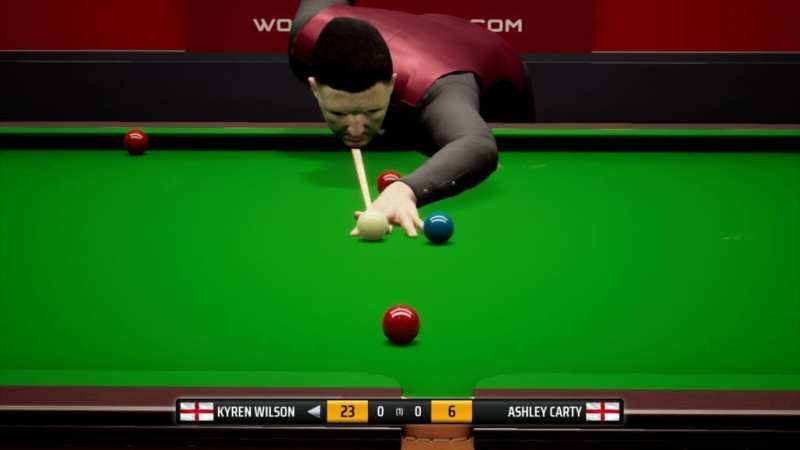 Even in ‘Easy Mode’, the AI is often far too good and makes playing a little unfair.

Every match is totally different than the other due to the literally countless variables. The balls always spread across the table in different positions once a new match begins. As such, you have no way to predict the outcome until all is mostly said and done. The AI player, meanwhile, can easily adapt and see all the best shots that it can take, almost totally regardless of how the balls disperse across the table. True, there are occasionally tricky shots that prove difficult at times even for the AI. But, it really ends up becoming a game of intense skill and strategy as a human player. The AI knows exactly what to do because it’s just following code. Human players, on the other hand, must constantly try to outsmart and essentially race the computer.

What makes this so annoying is that a turn doesn’t end until the active player messes up. As I said, there were many times I’d just sit and watch the AI make shot after shot. You can speed this up, but it doesn’t change the usually-stellar point difference. So many times I’d hit a bad shot that ended up putting the ball in just the right position to give the AI a chance to further the gap. As a result, it took four hours before I even won a match. That match in particular did drag on for a while, and the AI did make a few more mistakes than usual, but it was the outlier among many where I spent more time watching than playing.

If you’re someone familiar with the world of snooker, perhaps this all sounds appealing to you, especially if you like a challenge. But beginners should definitely tread with caution. Once you get a solid grasp of how the game works, it can become pretty fun, at least in my experience. Using the shot aim assistance certainly helps with this. All one can do to really learn the ropes is to observe the AI’s moves and listen to the commentators, who often provide insight into the match and will commend and criticize good and bad strategies, respectively.

Thus, Snooker 19 really does seem targeted more at seasoned players rather than newcomers. While you can learn and perfect your skills, this is easily one of the most hands-off simulators I’ve played in a while. This is great for realism, but it makes accessibility a tad limited.

Snooker 19 appears to provide an authentic experience to those who are learning, but it's quite difficult for newcomers.

By Chirag Pattni13 hours ago
Features

By Martynas Klimas16 hours ago
Reviews