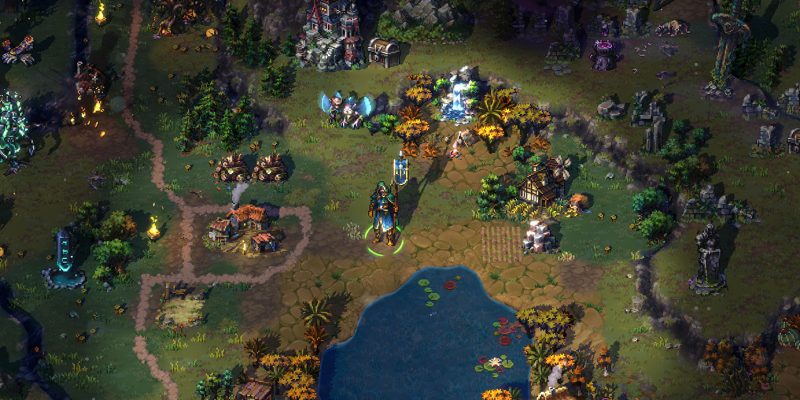 During the PC Gaming Show at E3 2021, developer Lavapotion and Coffee Stain Publishing (you may know the latter from Valheim), announced a release window for strategy RPG, Songs of Conquest. The window is Q1 2022, and it can’t arrive soon enough.

Songs of Conquest reminds me of the old-school Heroes of Might and Magic, but better. It’s a turn-based strategy adventure with RPG elements and kingdom management. You’ll build armies, battle opposing factions, and conquer new lands.

There are four factions you will need to contend with: Arleon, Barya, Rana, and Loth. Each has unique characteristics, stylings, and troops. As you explore the various areas, you’ll have your personal bard regaling you with a song of how amazing you are.

That all sounds rather appealing to me. And I haven’t even mentioned the pixel art style, which looks gorgeous. Don’t take my word for it, just see for yourself in the gameplay trailer below:

People will sing of your legend

The glimpse of gameplay shown in the Songs of Conquest trailer shows the classic Heroes of Might and Magic world exploration, complete with neutral enemies and rival factions. When you initiate combat, you’ll be able to deploy your troops on a hexagonal grid to take advantage of their strengths.

Your hero characters, called Wielders, become more powerful based on the number of troops under their command. These characters can unleash powerful magic to devastate foes and aid you in battle. In the trailer, you can also see the Wielders use equipment – armor, weapons, and trinkets – that improves their attributes. Plus, they will level up and acquire new and improved skills.

The gameplay trailer didn’t reveal much about the base-building side of Songs of Conquest. But, we do know that the way you build your base will impact your playstyle. You can build it in a way that is focused on brute force or magi — or a combination of the two. You will also need to manage resources, research advancements, and expand your kingdom.