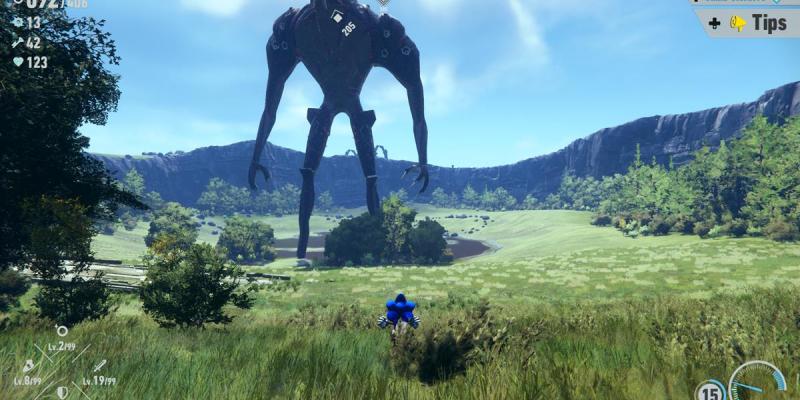 I had long since accepted that Sonic Team seemingly couldn’t nail the formula needed to make a 3D Sonic game work consistently. People will often defend the Adventure games and Heroes, which were okay, but featured horrible cameras, awkward level design, and imprecise, twitchy controls that combined to make characters too unwieldy to control properly. Eventually, Sonic Team decided to back off full 3D games and make ones that were just as much 2D platformers or hybrids, where Sonic’s style of gameplay actually worked. Many of us were skeptical when Sonic Frontiers — a new fully 3D game — was announced, but Sonic Team has finally done it. It’s not quite a great game, but it’s a pleasurable experience that lets Sonic run free in 3D alongside reliable controls and a solid camera.

Sonic Frontiers begins with Sonic and company heading to a series of islands that the Chaos Emeralds are inexplicably drawn to. But things get screwy when everyone, including Dr. Eggman, is pulled into cyberspace. Only Sonic is able to get out. He finds his friends on different islands, only to discover they’re trapped between the real world and cyberspace. It’s up to him to bust them out, all while exploring and figuring out just what transpired in the past.

There’s honestly a lot more dialogue than I was expecting, as islands are littered with story sequences (many of them optional) where Sonic has a conversation with his friends or a mysterious digital girl named Sage. The plot didn’t exactly grab me, and the way the game keeps slamming players in the head with “Sonic is a hero and lives to do good deeds” comes off as a little obnoxious. Still, the English voice acting is above board and there are some decent mysteries teased out throughout the course of the adventure. 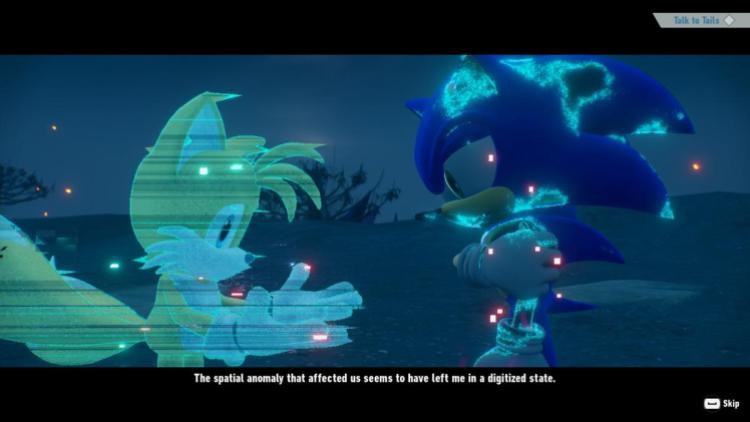 Sonic Frontiers takes Super Mario Odyssey, mixes it with Breath of the Wild, and then throws in a ton of Sonic for good measure. The game is often described as open world, but that’s not necessarily the case, as you have four large zones to explore that aren’t interconnected. These zones feature bite-sized platforming segments with lots of loop-de-loops, boost pads, and grindable rails. The focus is on exploration as Sonic runs around completing simple challenges, fights enemies, and does some classic platforming. At its core, though, the game is a collect-a-thon. And I find that intriguing, since Sonic Team did its best to ignore Super Mario 64 and go its own way back in the day, only to be taking similar lessons to heart decades later.

There are a few main collectibles that you’ll spend most of the game hunting down. Firstly, you need memory tokens, which change based on which island you’re on. You’ll hunt down hearts to converse with Amy, literal tokens for Knuckles, wrenches for Tails, etc. There are hundreds of these to find on each island, although you only need a fraction of them to progress. There’s no reason whatsoever to collect them all, which makes them feel mostly superfluous. They’re just a little thing to reward players with while exploring. I wish you could use the leftovers to buy skins like in Mario Odyssey, but that doesn’t happen.

Then there are gears, which you’ll need to unlock classic-style Cyber Space levels. You’ll mostly get these by defeating special mini-boss enemies that vary based on which island you’re on. You’ll also find them via exploration and by fighting regular enemies on occasion. Some of the mini-boss fights reminded me of Shadow of the Colossus, as Sonic will need to spend a few minutes fighting many of them. Some require him to run on roads they leave behind or grind on rails attached to them. Others force you to use various tactics, such as running around them in a circle to break their guard. They’re decently varied, but doing them more than a few times can get old. Hanging on the edge of tomorrow

The Cyber Space levels are similar to what we saw in Colors and Generations. They’re a mix of 2.5D and 3D sections where Sonic runs to the goal. However, you also need to collect keys by completing four tasks. This checklist often includes objectives like reaching the goal, beating the level within a certain time, grabbing a certain number of rings, and finding all the red rings. Get all four and you’re rewarded with three bonus keys.

The keys are a lot like the tokens in that you’ll likely have way more than you need after using them to get a few Chaos Emeralds. Each island has seven of those classic levels, so you’ll easily end up with a lot of them. These levels are mostly quite easy. Many of them are solid fun, but several are cumbersome. The more troublesome levels emphasize completing them as quickly as you can, but then they’ll have elements that slow you down and waste precious seconds waiting. Getting S-rank times is also too easy for the most part. The first island has one level that’s surprisingly difficult to get an S-rank, while the rest are all very easy. It’s curious.

You explore the zones themselves in 3D for the most part, although the third zone has a ton of little challenges that shift to a side-scrolling perspective. While Sonic Frontiers controls surprisingly well in 3D, the 2D controls are a little stiff and it can be hard to be as accurate as you’d like. The 2D sections are still a good time, though, even if I did get frustrated on occasion, especially when the quality of the classic levels randomly take a nosedive. 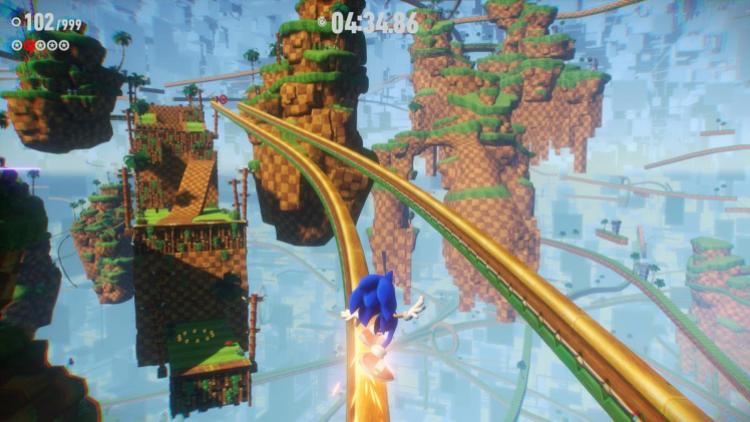 Never give up the fight

But the zones are obviously where the focus is. Sonic isn’t as fast as he was in past 3D games, which is a good thing, because he’s easy to control for once. When he stops moving, he usually stops in his tracks. This isn’t great for how Sonic Frontiers‘ momentum works, but it prevents Sonic from randomly throwing himself off of platforms every time you move. It’s a definite improvement, and Sonic has never controlled this well in 3D before. The camera does a great job of keeping track of him too, which is a massive boon.

Sonic can jump, double jump, drop-dash, slide, and boost. Boosting is where the real speed is. Even then, he’s fairly quick but not too quick. If you reach your maximum ring capacity, however, he gets a lot faster. Sonic has a fairly wide assortment of moves, including when he draws a circle while running to interact with the environment (which can trigger certain objects or cause rings to burst from the ground). But he also has a suite of attacks where he flings himself at enemies like a Dragon Ball character. It’s simple, but it works well in addition to being amusing to see.

Sonic can even parry attacks, although it’s the most forgiving parry I’ve ever seen. Parrying is really just a block that lets you follow up with a strong counter after the enemy strikes. You’ll get skill points as you play and you use these to buy new skills, which are mostly combat moves. It doesn’t take long at all to buy every skill and I bought one of the best ones (which allows Sonic to bounce back and not take damage from enemy attacks) right after reaching the third zone. 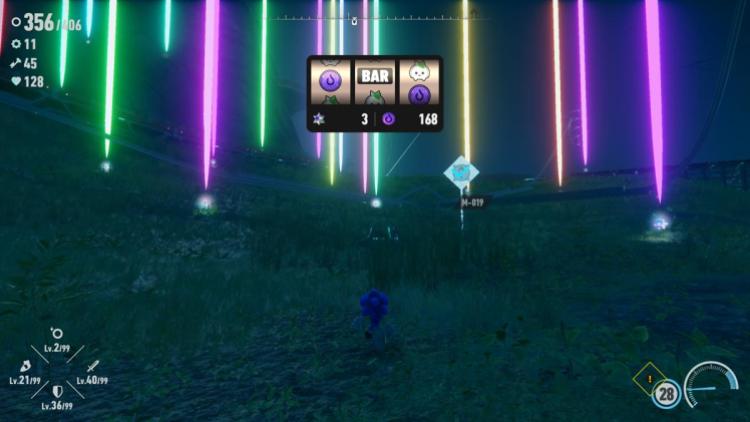 With keys in hand, your eventual goal is to collect all seven Chaos Emeralds so that Sonic can transform into Super Sonic and fight a boss. These boss fights aren’t always all that great, but they’re dramatic and flashy, plus it’s always a treat to play as Super Sonic. Sonic Frontiers is still a 3D Sonic game, though, so there’s a bit of jank. Some elements won’t work as they’re supposed to, interacting with objects won’t be as polished as they should, and it’s easy to fall off of something high off the ground due to no fault of your own. But it’s all mostly serviceable. I really don’t like how, when you fall into the abyss, the game takes you back to your last save instead of respawning you. It’s completely unnecessary.

To top it all off, you’ll be looking for red hearts to increase Sonic’s attack, blue eggs to increase his defense, and little creatures to either increase his speed or ring capacity — just like Breath of the Wild. You can get all of these and more by heading into the game’s fishing zones where Big the Cat lets you borrow his fishing rod for purple tokens. You exchange caught fish for more upgrades. There’s a fair amount to do in Sonic Frontiers, although it isn’t nearly as exhaustive and filled to the brim with things to find like Super Mario Odyssey and Breath of the Wild.

Overall, Sonic Frontiers is the best 3D Sonic game, hands down. It has the best controls and does an excellent job of providing Sonic gameplay in 3D without the frustrations or adherence to outdated structures that previous games clung to. This port is also all right, even if it’s locked at 60 fps — but you have options to get around that. Too bad you can’t get around the awful draw distance. But there’s a reason Sonic fans are so happy with this one: we finally got a legitimately good fully 3D Sonic game. 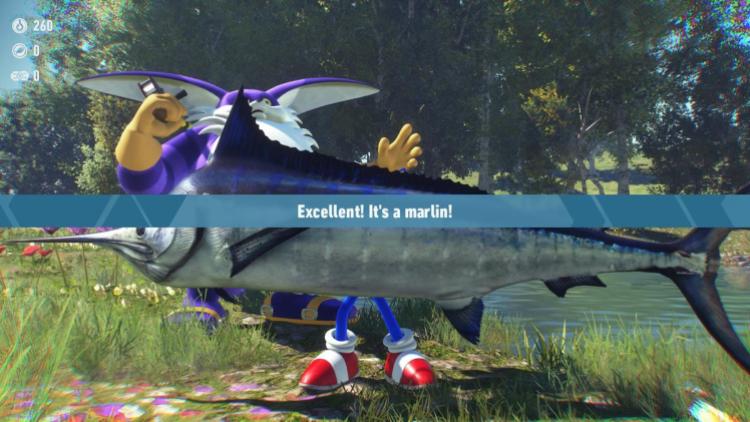 Sonic Frontiers succeeds in finally making Sonic truly work in 3D without many of the problems that plagued past titles. While it's far from perfect and could have used more polish, it's a fairly impressive game that offers up most everything fans could want.

By Dani Maddox2 hours ago
Reviews

Yomawari: Lost in the Dark Review: Terrifying in the best way