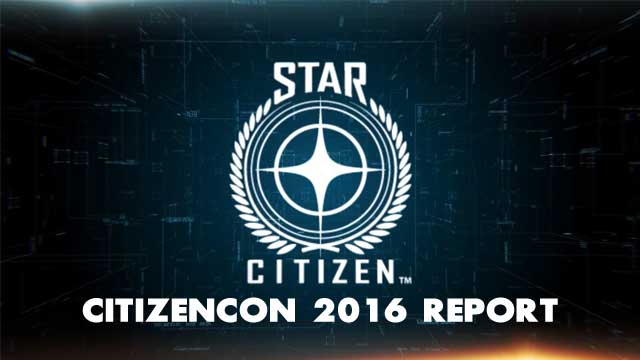 CitizenCon returned to L.A this year and once again it was an opportunity to share what’s been happening with Star Citizen‘s development.

Fans gathered nice and early at the L.A venue and there was a lengthy pre-show segment. We’ll skip over that and just get to the juicy stuff when Chris Roberts took to the stage to show off what’s coming up for backers.

The 2016 platform update slide popped up focusing on sharing content and receiving feedback from the community. This they say is the core of Star Citizen. They want players to experience the game but also connect with other people both inside and outside of the game. Some of these efforts have been up and running for a long time such as the Organizations System, the forums etc. So what’s next?

The next stage of community engagement is Star Citizen Spectrum. This is a real-time web application that offers “all community communications” in Star Citizen. The system is modeled after contemporary communication platforms built on a “modern technology stack”. There has been a focus on usability and to also provide tools for community customisation.

The first part is “Rich Modern Chat” in real-time where fans will be able to react to comments from members of the community. They wanted to modernise the traditional forum model which will work in real-time but essentially it’s a souped-up forum system. Spectrum is private messaging, forums, alerts, and knowing when friends are on and offline. Organisations will have access to all these features. Most importantly it will have voice capability outside of the game and voice can also then be transmitted into the game.

Spectrum is a web app and desktop application and will also be the CIG launcher and large patch downloads will be a thing of the past when this rolls out. It will also work on mobile and tablets.

The first release is due in a few weeks according to the team but it will be improved in phases. The initial release will be browser only. 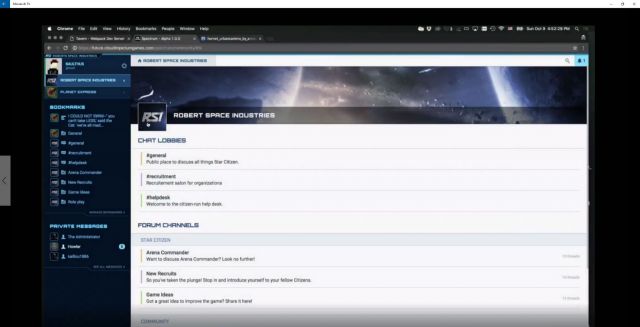 This is the current version of Spectrum.

Next up was a video entitled the UEE Militia Mobilization Initiative. The Polaris class corvette was the latest ship to be revealed and this was effectively a plug for ship sale. Chris did step in to say this is to support the game’s development and should only be for those who really want to support the game.

Chris says the single player campaign has grown in scale since they revealed it. Squadron 42 has 28 chapters with 60+misions, 340 speaking roles, 20 hours of performance capture, 40 distinct ships from fighters to dreadnoughts. There will be dogfighting in space and in the planetary atmosphere with systemic space and FPS gameplay.

Not all the Squadron 42 actors who have taken part have been revealed so there will be some surprises. 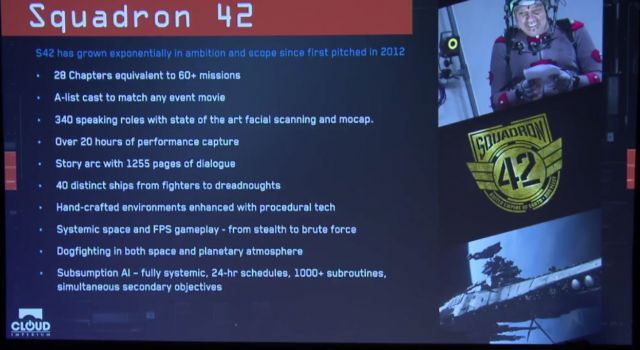 All chapter and gameplay features are in grey-box or better and they’re taking a single chapter to shipping quality. They are continuing to build technology and systems for the long-term for the whole Star Citizen universe.

Chris stressed that they “want to do it right” so there will be no shortcuts. Squadron 42 will not be coming out in 2016.

It was then time to move onto the next few updates including 3.0 right up to 4.0. Note, no definitive timeframes have been specified for these milestones.

Coming up will be: 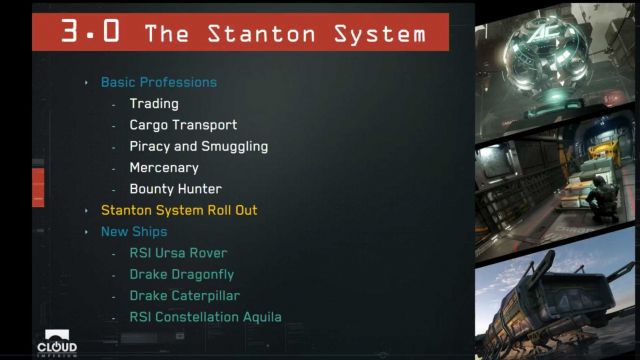 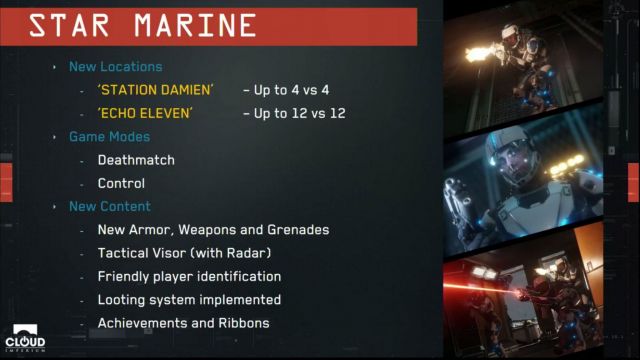 Chris them moved on to the 3.0 update which includes the Stanton System rollout, new ships and basic professions.

Next up were further roadmaps slides going forward for the next year although Chris stressed there are no set dates for these updates. 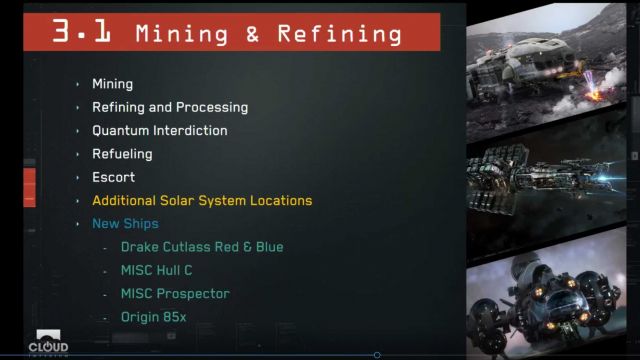 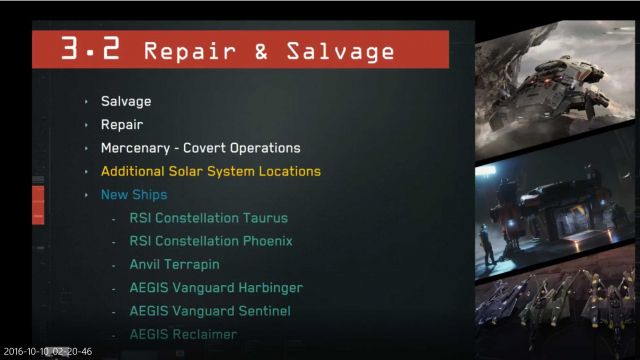 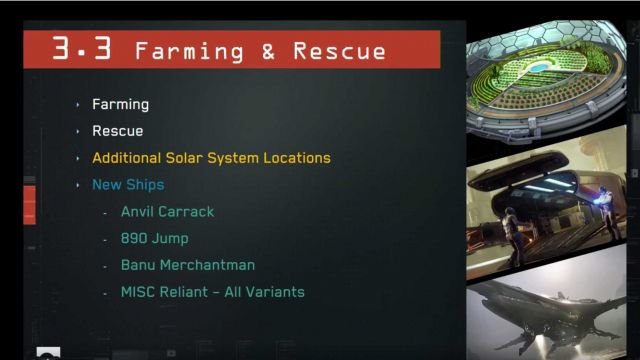 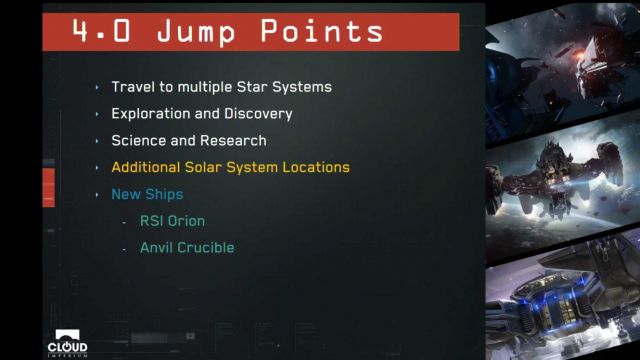 Moving on, it was time to watch a demo of Procedural Planets in the v2 demo which you can see in the full video below. This was 100% live in the engine and real-time according to Chris. You’ll see a mission answering a distress beacon from a planet’s surface and there’s even a surprise lurking under the sandy dunes as a sandstorm rolls in which also demonstrates the kind of planet weather systems they are looking to add. It’s impressive stuff and probably the best demo they have shown so far due to the scale and content.

Following the tech demo, they took a trip behind the scenes look at the planetary terrain system. The presentation concluded with the team singing happy birthday to Star Citizen and next year’s CitizenCon will take place in Frankfurt.

These presentations are always impressive, but as a backer, it’s hard to get too excited for the final game when it’s such a long way out. Assuming CIG can keep going, the final product could be outstanding. However, how it will all slot together to become one amazing universe is still not clear and CIG is going to have to keep selling ships to keep the funds coming in to make this a reality.