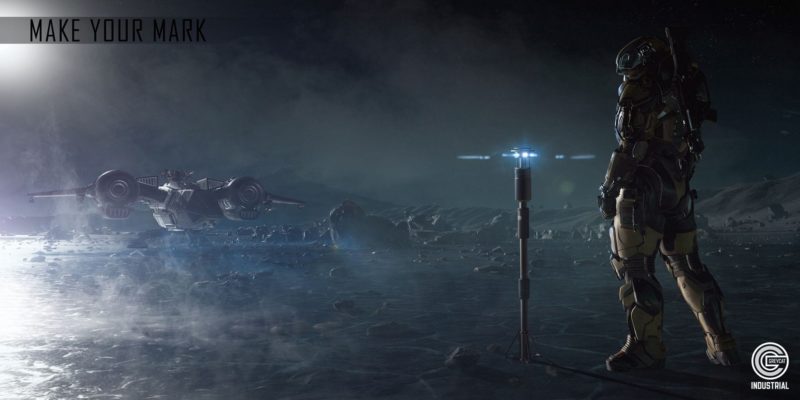 For years CIG has been Star Citizen selling ships to help fill the coffers to fund development and today the latest money-making scheme has been launched.

Called Land Claim Licenses, these licenses entitle a play to claim a single 4km x 4km or 8km x 8km of UEE land that has been zoned for commercial, residential or industrial use. Although these “licenses” can be purchased now for cash ($50.00), they will be purchasable with UEC, the in-game currency, when the mechanic is launched in the game.

In conjunction with the license, players will also have a GEOTACK marking beacon. This beacon is inserted into the ground and a memory module in the tip which is then taken to a Planetary Development office to execute the claim with the license. The beacon will also send data to the owner such as weather conditions and if someone is trying to “exploit your property”. Destroying a beacon is apparently a criminal offense so expect a lot of these to be destroyed.

These licenses for something that does not exist in the game are being sold right now and Licenses will even be able to be sold on to other players second-hand. The system is a great idea when there is actually a game to play that can facilitate the feature but to launch it so early for a price is a real cash-grab.

A lengthy FAQ has been posted on the official site, but even though  Land Claim Licenses would make sense in a completed game, CIG’s continual efforts to squeeze more money out of backers has become tiresome and increasingly concerning. CIG are quite simply running before they can walk.

You can watch Chris Roberts talking about the feature in the new Star Citizen ATV where he explains why they came up with the concept.

Rev Up with the Humble Codemasters Racing Bundle for PC