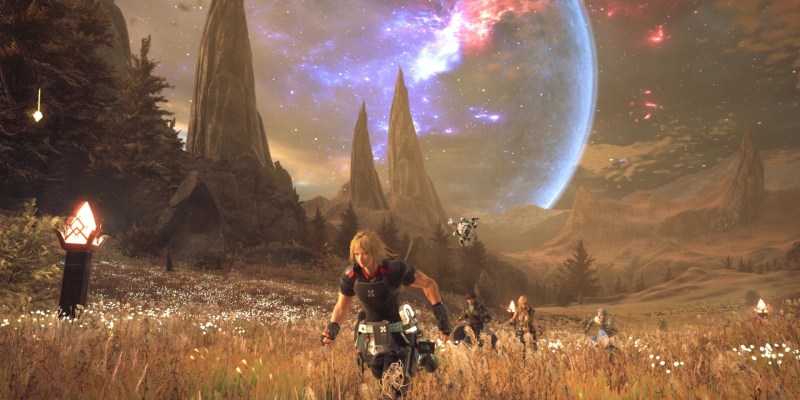 Star Ocean: The Divine Force is the sixth major entry in tri-Ace’s and Square Enix’s JRPG franchise. It’s also celebrating the series’ 25th anniversary, which is fitting, since this is the first time I’ve played a Star Ocean game since 1999’s The Second Story. I still remember that game vividly, from trying to see all Private Actions as Claude to thinking if I should pick Bowman or Precis, as well as wondering how I could recruit Chisato.

I digress. The point is, that game holds a special place in my memory, as I genuinely loved it. And so, here I am, looking at whether The Divine Force can recapture that magic, and if it could stand tall among giants of the genre.

A fairly common narrative hook in the Star Ocean titles is the meeting between a highly advanced starfaring civilization and the inhabitants of an underdeveloped planet. This occurs right at the start of the campaign. Raymond, a captain of a merchant starship, crash lands on a planet called Aster IV. There, he encounters Laeticia, a princess of a nearby kingdom. This Dual Protagonist system lets you see the plot unfold through the eyes of your chosen main character. While most of the narrative arc has overlaps, there are segments where you’d notice how key events transpire based on that character’s perspective.

Along the way, you’ll meet the rest of the party, such as Albaird, Laeticia’s over-protective knight, the android Elena, a gifted and pragmatic engineer named Midas, and a ship lieutenant named Marielle Kenny (a descendant of Claude Kenny from The Second Story). Each character leans toward their background, so you can expect a few chuckles whenever the Aster natives refer to high-tech contraptions relative to everyday objects in their world or whenever the futuristic folks are clueless about fantasy and magic. 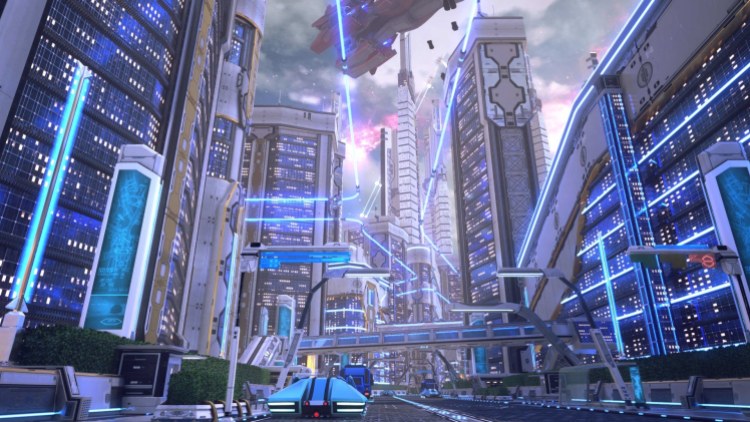 However, Star Ocean: The Divine Force‘s campaign does have some glaring flaws. The first of these is the slow and somewhat redundant pacing of the story. For the first few hours, you’ll backtrack to and from the same areas, oftentimes to complete a mundane task or have a dialogue conversation. These types of instances occur later on as well, even when things are starting to pick up. Moreover, you can expect some tired tropes and predictable sequences throughout (though there might be a couple of surprises much later).

Another obvious problem is how character animations and models appear wooden and stiff. In the vast majority of cutscenes, you’ll notice how everyone tends to have their arms at their sides. There are exceptions, of course, such as the image seen below. Unfortunately, it’s as though the developer just decided to stick to the idle pose. In supposedly epic moments, I couldn’t help but feel the utter lifelessness, to the point that it became immersion-breaking. 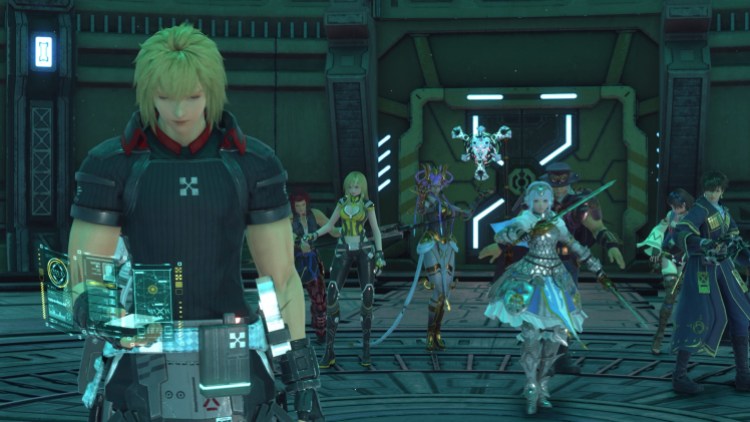 Wind beneath my wings

Early in the campaign, your party recovers D.U.M.A., an AI-powered drone that allows your active character to lift off and glide. This is one of the best features in Star Ocean: The Divine Force, as it adds verticality to general exploration.

This is not an open-world game, mind you, but certain regions are vast. Likewise, there are collectible points and chests that can only be found if you look hard enough. Another treat is how it practically replaces regular on-foot movement. Why settle for sprinting, when you can temporarily fly or zip across fields with ease? 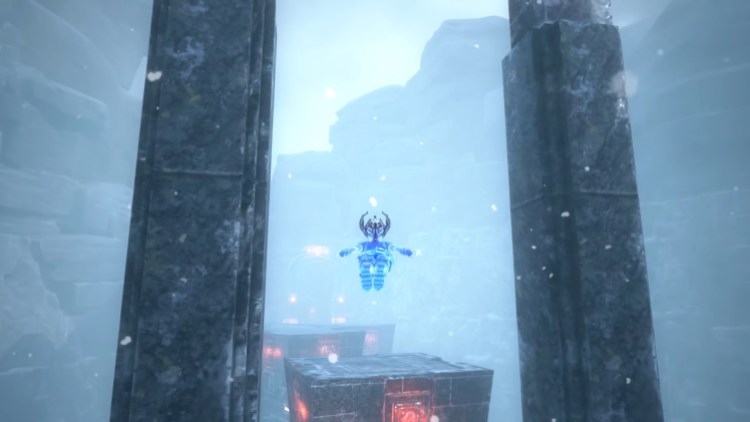 Perhaps the most noteworthy factor in The Divine Force is how D.U.M.A., or the Vanguard Assault (V.A.), makes for highly dynamic combat engagements. The real-time battle system is something I loved from The Second Story, and, this time around, I was impressed by the rapid attacks and fast-paced combos that could be unleashed.

For instance, you can glide around and blindside enemies, stunning them and gaining a boost. Consequently, your other party members might have assigned skills that will cause them to obliterate the target. Additionally, you can freely switch between characters to use their own abilities or pause the game if you wish to issue orders manually. There’s also the “Vatting” option, which is akin to a limit break or ultimate, with a gauge that everyone shares. 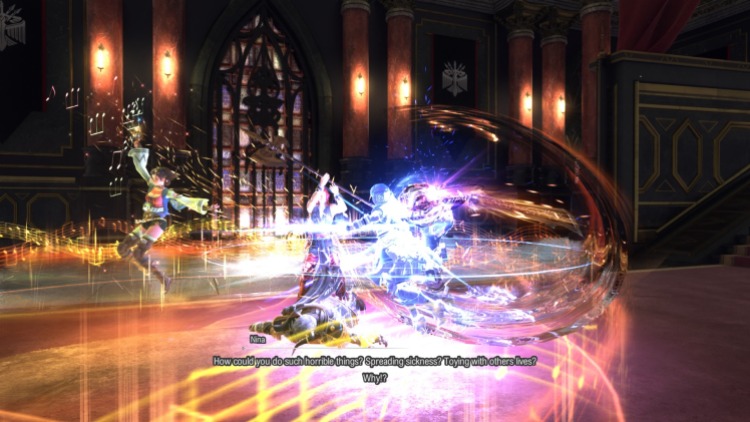 And, of course, character progression itself is largely player-friendly. You can build someone to tailor-fit your needs via a Sphere Grid/License Board-esque panel, adding the active skills, passives, and stat boosts that you prefer. You may also level up these abilities, including the ones used for crafting.

Perhaps my only gripe, combat-wise, is how one teammate, Nina, tends to be very inconsistent as the dedicated healer. There were times when her AI would do its best to keep your group alive, and moments when I desperately had to babysit her or manually control her just to be on the safe side. I can’t tell if that’s due to her wonky AI or if I need to tweak my setup further. 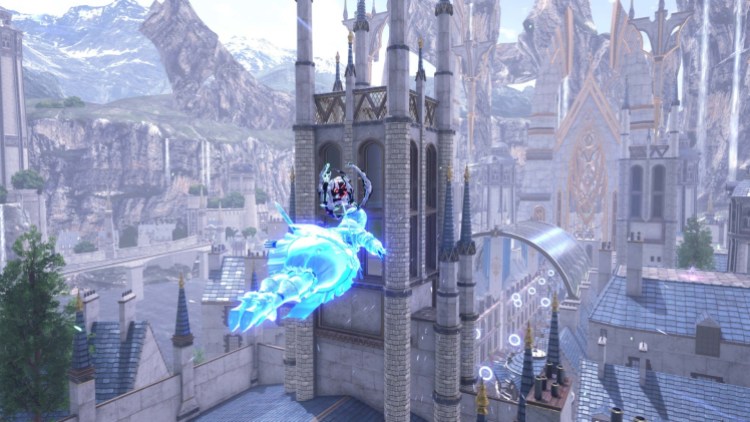 Stuff on the side

Star Ocean: The Divine Force has its own minigame called Es’owa. You’ll use your collected pawns, pitting them against another NPC’s selection. The action takes place on a board, whereby each pawn or piece has its own effect. To be honest, I didn’t really get the hang of this. I only tried a couple of matches, but it didn’t pique my interest.

I should mention, though, that you’re going to run into Welch. A recurring character in the series, Welch will call upon you to fetch specific items for her. Each time you complete a task, it’ll unlock a new crafting function. These range from creating potions and bombs to new accessories and stat combinations. RNG is a given, naturally, so you’ll rely on luck if you want the best rolls. In my case, I stacked a bunch of XP boosters and a bonus modifier to quickly level up the party member that had those items equipped.

Lastly, Private Actions (PAs) can be done by your main character. Sadly, there doesn’t seem to be any indicator as to when a new PA can be initiated in a city. There are cases when your hero would be left on their own, and you’d have no clue if a new PA awaits you or if you’re just running around aimlessly only to receive a generic reply. 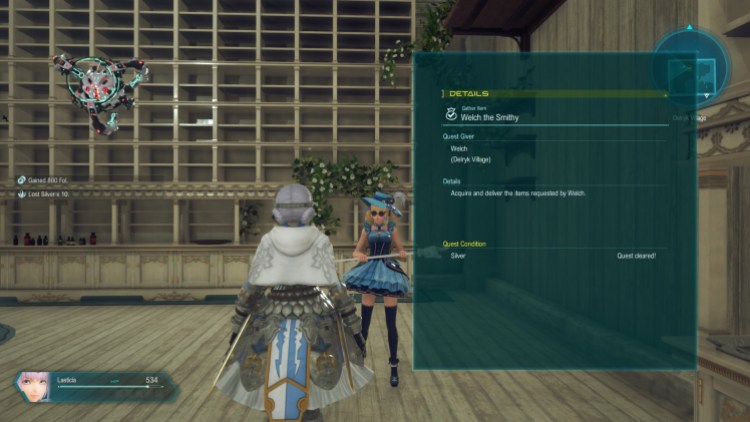 Regardless of what Star Ocean: The Divine Force brings to the table, the biggest downside is the atrocious performance that I experienced. With an Nvidia RTX 3080 and an Intel i9-10900K, I had expected top-of-the-line results. Unfortunately, I’ve been plagued with stuttering woes right from the moment I started my run. It didn’t really matter that some landscapes in the background were beautiful to behold, or that I could chain multiple attack strings in battle. In some cases, my character was just running down a narrow corridor in a very small area, and I’d notice frequent dips.

In the email that we received along with the review code, we were told that the game performs the “pre-shader cache compilation processing” the first time it launches. Little did I know that the whole thing didn’t work and it had to be done manually. That info came from a Steam forum post that I only saw a couple of days ago. As such, even though it alleviated the issues somewhat, it came a little too late in my playthrough to have any meaningful impact.

This was also slightly compounded by the fact that this port doesn’t have a fixed fullscreen or viable borderless option. Choosing fullscreen would instantly switch to windowed mode the moment I alt-tabbed, and picking borderless prevented me from alt-tabbing completely. All in all, Star Ocean: The Divine Force didn’t measure up to what I had expected it to be. If its predecessor from two decades ago was something that I remember fondly to this day, then this is more of a forgettable foray. 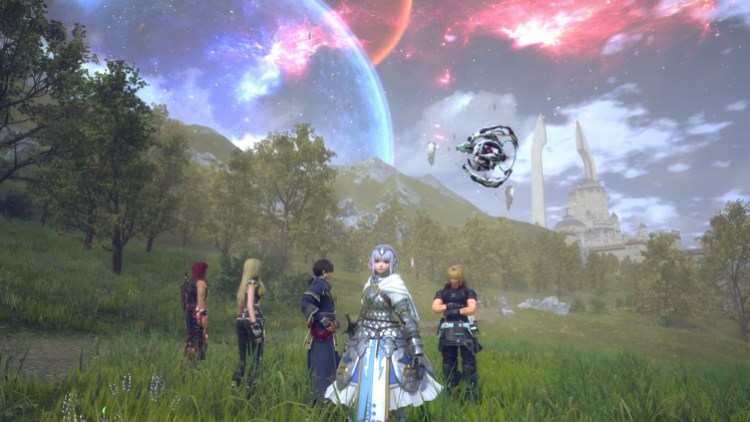 Star Ocean: The Divine Force has exciting combat mechanics and a fun traversal system, but it's hampered by poor performance, bland cutscenes, and questionable pacing.

The Entropy Centre review — If eternity should fail