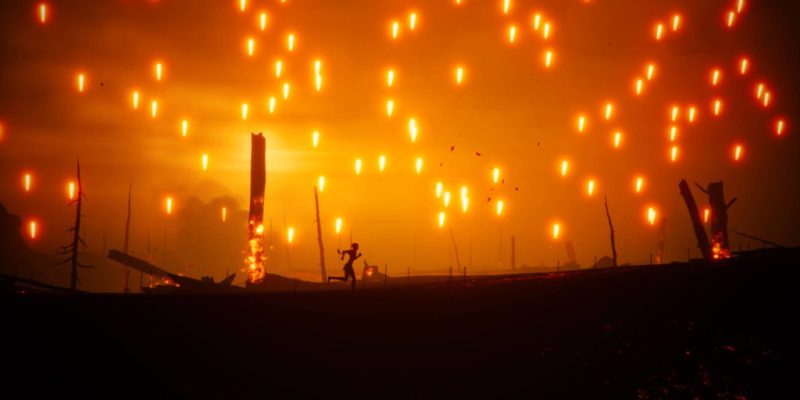 The hardest part about enjoying video games in my adult life is simply finding the time to play them. Networking events, gym, work, and family functions easily can consume hours of free time on any given day of the week. And, I know that isn’t the case for everyone, but for some like me, there’s a reason why I play quick first-person shooter and Rocket League matches so frequently. More often than not, I try to avoid anything that demands more than 15 hours of my attention in order to complete it. Instead, it’s much easier to drop in for a few matches here and there in order to get my evening fix. Even early on, although I liked what I saw, I wondered if Stela, too, would be a big timesink.

I’m sure the developer of Stela didn’t set out to create an experience that fit into my work/life balance. Or, being that Stela is also being developed for Apple Arcade, maybe it did. Regardless of either side of the fence, SkyBox Labs managed to craft an experience that I was invested in, even from the very first steps taken. And, it managed to do so without dialogue or bombastic visuals found in most AAA productions.

A world without words

At first glance, you might write Stela off as just another physics-based puzzle platformer. It’s hard not to when so many others have come before it. Games like Braid, Inside, and Forgotten Anne all share similar attributes to Stela, especially in how they function primarily as physics-based platformers. There are puzzles, and oftentimes, no weaponry to fend off enemies in mostly panic-inducing situations. Instead, you only have your wits and reaction time to rely on in order to make it out alive.

Stela does share some similarities and themes from the aforementioned titles, especially the latter when it comes to navigating puzzles with haste in order to avoid death. Dangers can be found around most corners. The game trains you early on to not press on through the game with a lead foot. Instead, it teaches patience with spikes, fire, and monsters.

But Stela stands out against the crowd with its usage of sound and space in order to elicit emotion and tell a story without the use of text or speech. Crude images can be seen throughout the game on walls, rocks, and pillars. These mostly serve as warning signs for danger or hints when progress has come to standstill. 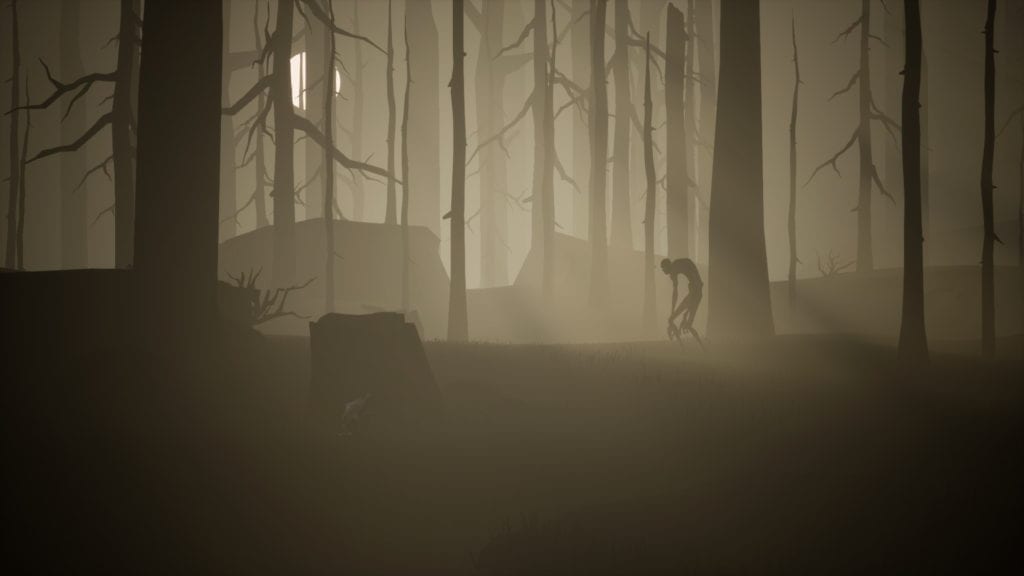 It doesn’t take words to tell how terrifying a scene like this would be to playthrough. And yes, these creatures will lock onto you and run at a dead sprint if you don’t watch your steps.

There is no dialogue to be heard or read in Stela. Other artistic tools are amplified, creating a wide range of emotion through sound cues and creative uses of depth in a scene. Levels are not just navigated from left to right in standard 2D fashion. Stepping backward, forward, or downward can reveal the path ahead.

Sound often accompanies the visual cues, almost giving a voice to the actions on screen. There were many times throughout the game where a sharp (pat, pat, pat) drum beat can break up the silence of a slow walk in the snow, notifying you that something’s afoot. Other times, it was much more apparent, with string cords ratcheting up the mood, moving faster and more feverishly to alert you to incoming danger. 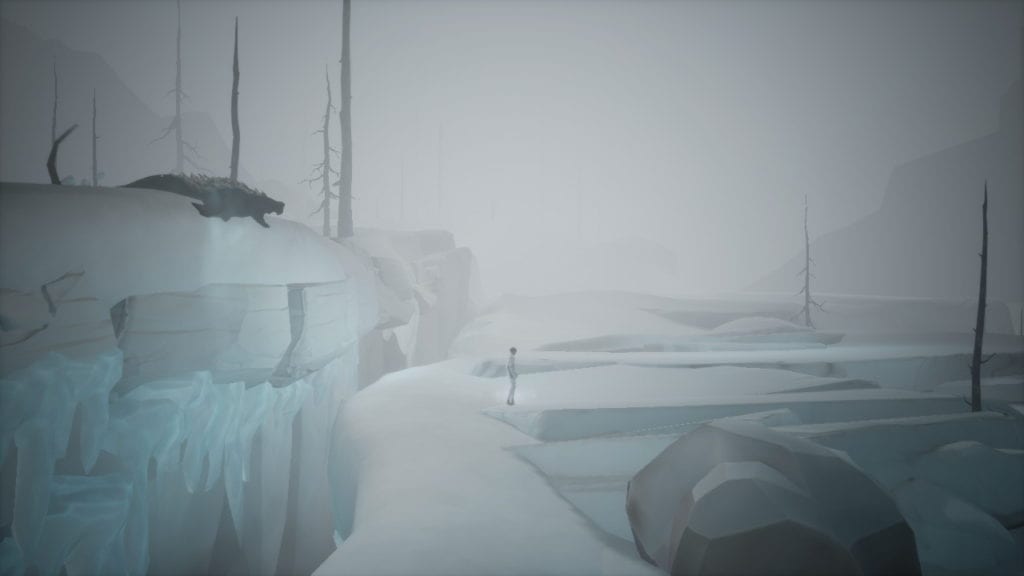 Escape from enemies sometimes takes a little trial and error. You’ll be glad that you did, though.

Sound often provides a good indicator in Stela when something important is about to happen, you’re in peril, or even when death is but a few steps away. But, it also highlights moments of reflection. There were more than a few times when I found myself lost as I admired the ominous synth sounds playing while a blazing fury of bats buzzed the tower I was in. I remember wondering, “What was this used for?”

There are many situations like this in Stela, moments where the environment’s structure, scale, and sound assume the role of dialogue in its absence. This design choice was remarkable in that there was very little frustration or even confusion as to how to move forward. I felt this odd sensation of hope to keep pressing on and eventually arrive at an answer.

Hope, was that you?

In many of the games previously mentioned, the platforming itself and mechanics were the focal points of the story. For Braid, being able to manipulate time is how you solve puzzles. In Forgotten Anne, a similar tool is deployed, transferring power in and out of your body to animate machinery and complete riddles.

However, in Stela, it’s more about surviving death in a world that is much bigger than the character you control. That landscape is filled with creatures that can kill you in arm swipe or bite of their craw. You are but a meager soul that awakens on an altar, only to start running for your life or purpose — whatever that is. 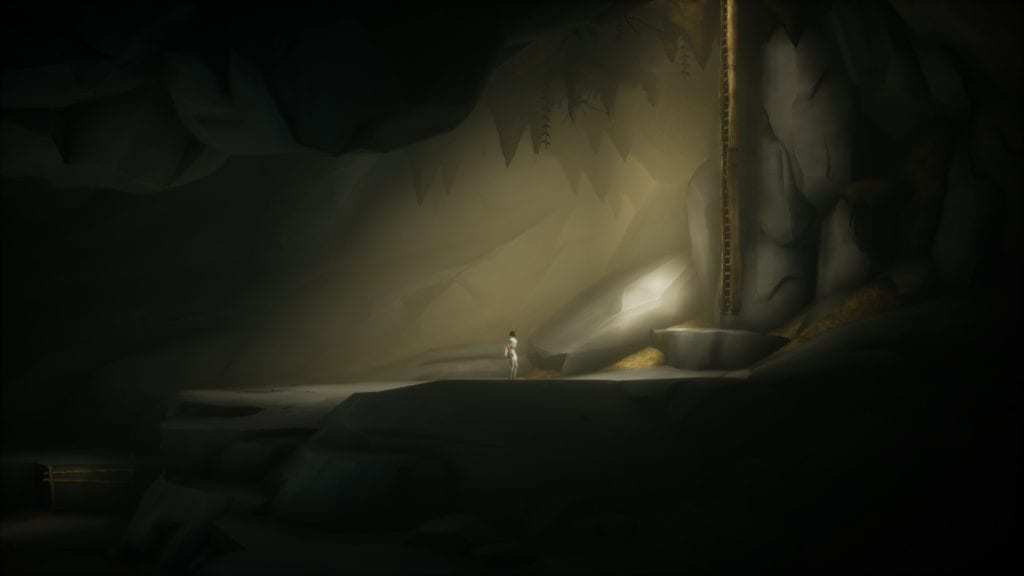 Triumph comes at most times by narrowly escaping enemies or solving a puzzle with only milliseconds to spare. This is the case for the nearly three-hour playtime. And, although short, I was completely invested from start to finish. I didn’t know who Stela was, if I was this person, or if the path I embarked on was my purpose. But, I kept pressing on, through each puzzle and deathtrap.

I often found myself hopeful that whatever was coming at the end would be worth it. This sense of positive forward momentum honestly lasted until it wrapped. I’m still unsure if the story in Stela supposed to stand as some sort of symbolism for life, the obstacles that people face and persevere, or maybe something much simpler. The important thing, I suppose, is that the overall experience managed to extract these feelings and thoughts over what many would consider a short game. I think that’s what makes it so fascinating. 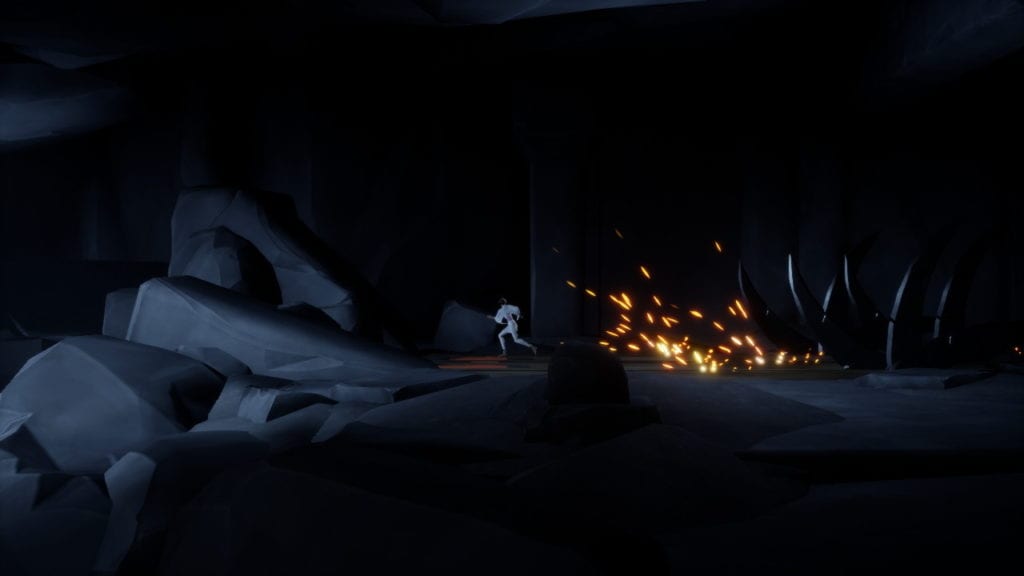 It’s really hard to determine who the right audience is for Stela. If you’re a fan of physics-based, puzzle-platformers, it is an easy recommendation although its fairly straightforward. At the same time, if you are looking for something meaningful without the huge time investment, it’s also hard not to recommend Stela. Even if none of these gameplay elements have drawn you here, there is still the sound, level, and environment design to appreciate from the first steps and all the way until the credits roll.

Environments vary from intimate close-quarters (sometimes too close for comfort) to massive scale, making your character appear microscopic in their structural presence. Stela never had to go looking for its groove to get it back. Rather, it finds it early on, filling its short, three-hour playtime with a deep experience that is easily recommendable. SkyBox Labs managed to create a perfectly deep short story, brimming with substance and can be played through in a single, effortless sitting.

Stela is a nice break from the hectic shooters and other competitive style games. It opts for impeccable sounds and visual design in order to convey emotion throughout the three-hour playtime. But, don't let the overall length steer you away from something that's more akin to a short story than a full, AAA produced title. It's a worthy experience from start to finish, providing the right escape for those without a lot of free time on their hands.